The West End’s other Italian restaurants should be pistachio green with envy.

You’d be forgiven for thinking that London’s recent spate of pasta-only Italian restaurants materalised out of thin air, but it’s actually just another chapter in the long history of Italian hospitality and catering in the capital. Soho in particular, as well the areas immediately surrounding it, has been home to countless Italian restaurants, delis and caffs over the past few decades. As with many other communities though, the relentless march of property prices, regeneration and other factors has seen many of those businesses slowly disappear.

One stalwart that has not only survived but continued to thrive is Brewer Street’s Lina Stores. This grocer and deli has long been one of the places to go in the capital for fresh and dried pasta, pannetonne and other sweets as well as Italian cheeses, charcuterie and ingredients of all sorts. The deli was recently revamped in a distinctive pistachio green, a colour scheme it shares with its new restaurant a short walk away on Greek Street. Don’t be put off by the snug ground floor if counter seating isn’t your cup of espresso. A larger dining room with proper tables sits underground, complete with vaulted ceiling.

Hey look, is that Richard Vines?

Lina Stores’ aubergine polpette was almost a home run. The crispy shell gave way to reveal a soft, silky interior. The aubergine puree inside was disappointingly muted in taste though. The daubing of San Marzano tomato paste picked up the slack with its remarkable peppery sweetness and umami.

People can be found queuing at the nearby branch of Bibimbap while tables and stools sit empty at Lina Stores. The idiots.

Although the curled slices of parma ham weren’t the best of its kind that I’ve ever sampled, it was far from bad – especially given the inevitable variations in a cured, aged product. As ever, much of the joy was found in the gossamer-like ribbons of fat – the musky, earthy umami tinged with blue cheese-ish notes was a true delight. 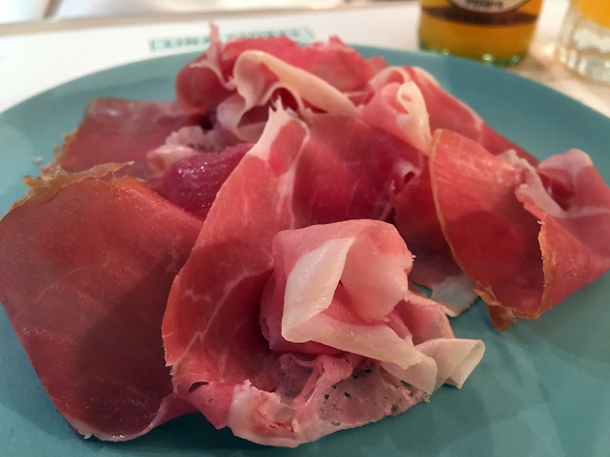 The Lina Stores deli regularly sells slices of porchetta, but their version wasn’t a patch on the versions of this Latium classic that I tried in Rome. It was therefore no surprise to discover that the restaurant’s attempt at a porchetta panino was also lacking. The pork was a bit too dry with neither enough fat and crackling or enough in the way of rosemary, fennel or garlic herbiness. The best thing on this plate was the bread – weightlessly light yet eminently crispy. Such a shame.

It’s not even as good as some of the porchetta you can get in New York.

Although the strings of pici bore a passing resemblance to spaghetti, this pasta had a mouthfeel that was far removed from that household staple. Gently springy and chewy, it’s a world away from the soft, cloying kids-and-nan pandering mush served in Italian high street chains up and down the country. The pici was joined by coarse flecks of sausage bursting with an aniseed-style bittersweetness and a creamy sauce that managed to coat the mouth without becoming over staying its welcome or drowning out everything else. Finding joy in something so restrained and balanced, yet so eminently well executed, shouldn’t be remarkable. And yet it is.

The canolo was surprisingly pleasing with the deep-fried pastry considerably less stodgy and oily than other renditions of this Sicilian staple. Although the dustings of crushed pistachio and chocolate were dull and lifeless, there was a surprising amount of joy to be found in the ricotta-based cream Almost certainly blended with a bit of icing sugar and perhaps some butter, it was smooth, wispy and sugary sweet. Although there was perhaps a bit too much icing sugar and not enough ricotta, the well-crafted contrast between crunchy pastry and slippery smooth cream makes this flaw worth overlooking.

The deep-fried pastry cones are pre-prepared and then filled on demand.

Tender, fleshy artichoke hearts were aptly paired with plump juicy olives, the grassy sweetness of one naturally complimenting the other. 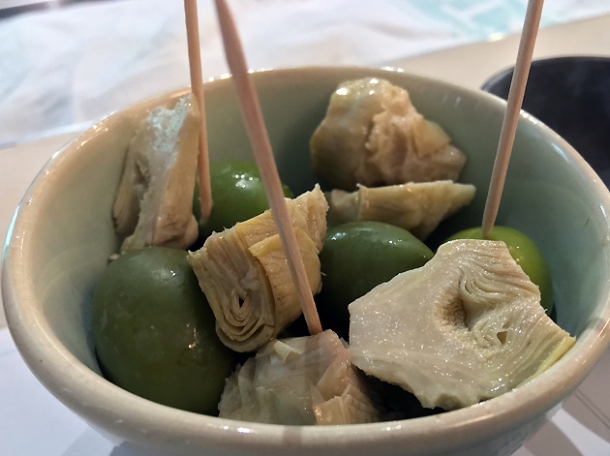 Rotund tortelloni were mostly soft, but with enough springy bite in places to still be texturally pleasing. The courgette filling left me cold, but the bold umami and sweetness of the tomato sauce just about made up for this flaw.

Lina Stores’ pappardelle should be one of the modern wonders of the world. Wafer thin, yet silky soft – each mouthful sent enough shivers of joy down my hunched, curled spine to make it bolt up right. The morsels of rabbit weren’t quite good enough – occasionally firm and springy, but usually too soft. The distinct herby bitterness of rosemary and the moreishly creamy sauce were apt partners for the wonderful pappardelle though.

Definitely not pap, but worth paparazzing.

There wasn’t enough stone fruit in the slice of cherry and almond tart. Even so, the thin yet buttery pastry filled with the distinct sweet nuttiness of almonds blended with butter and sugar meant this was still a satisfying dessert.

Despite its clumpy appearance, the nduja was wispy, piquant and coarsely meaty while also unctuously creamy. It’s a startling combination of taste and texture, especially if you’re used to the pale imitations of nduja served almost everywhere else in London. The accompanying ricotta was just as good – texturally light yet richly flavoursome, its milky creaminess was a perfect counterpoint to the nduja.

The bread was serviceable enough, although it did sometimes get in the way of the nduja and ricotta. Sometimes, it really is worth skipping the carbs.

At the risk of making a crude comparison for explanatory purposes, the ricotta gnudi were a bit like sag paneer faggots. Creamy cheese and bitter veg stuffed into a caul-like skin made for light yet deeply satisfying meat-free meatballs.

Stop sniggering in the back.

Given the excellence of the ricotta in Lina Stores’ dishes thus far, the limpness of the salted ricotta crumbled atop the gnocchi was surprising. Even so, the fluffy soft gnocchi and crisp, firm sweet peas made for a fine combination. The problem here didn’t lie with either pasta or veg, but in the portion size. This large plate was one of the most generously sized here, but the anomalous one-note flavouring of this dish meant this generosity quickly became a curse rather than a blessing. 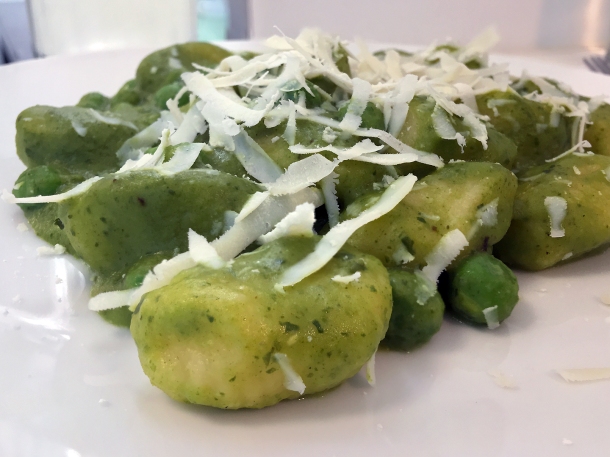 Few things are more tedious than the busy-boredom of a dull but generously proportioned dish.

Served in a halved lemon with a dash of limoncello, the lemon sorbet looked like a boiled breakfast egg dementedly frothing over. Even so, it was a superlative sorbet in every respect. Surprisingly dense, yet exceedingly smooth and bracingly cold with a bold zestiness occasionally tinged with pithy astringency. Sorbets in London are rarely as well-crafted as this. 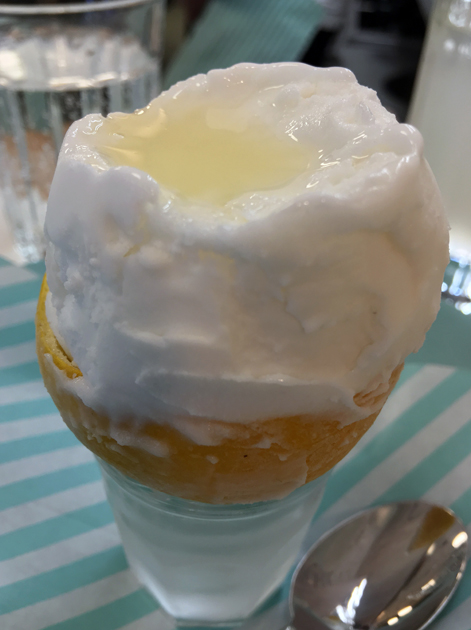 Sorbets should be like lovers – refreshing, flavoursome and smooth.

The nduja and ricotta was just as good as it was before.

Gorgonzola arrived in an unexpected form. The mellow funk and tang of the creamy thick puddle was complimented surprisingly well by the musky sweetness of the chutney which reminded me of kumquats. Although gorgonzola still won’t be displacing either stilton or roquefort from my blue cheese affections, this starter is still well worth having.

Sometimes not everything has to be turned up to roquefort 11.

Although the raddichio and punterelle salad could’ve done with more of the latter and less of the former, this dish was still a winner overall with the refreshing bitterness of each vegetable complimenting the other. Anchovy vinaigrette ensured the bitterness never became too overwhelming, even if the initially distinct taste of anchovy eventually gave way to a more generic vinaigrette sweetness. 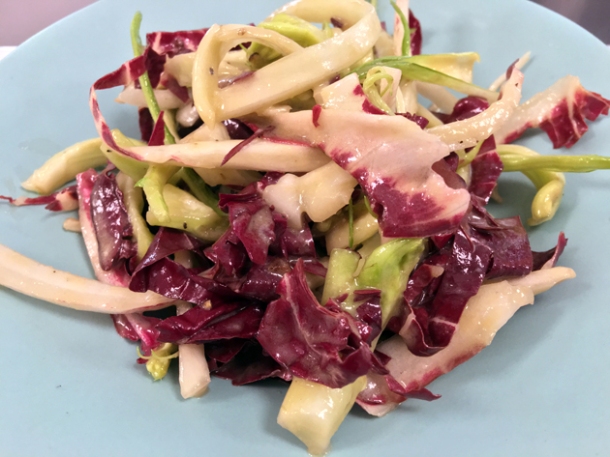 Although the veal ravioli wasn’t quite up to the standards of nearby ravioli specialists Latium, this main was far from a dud. Respectably firm pasta envelopes came filled with a modestly earthy, lightly springy mince. I’m usually quite skeptical about mincing expensive meats – the charm and character of the flesh is often lost – but the veal just about justified its presence here. Even so, much of the mouthfeel and flavour came not from the bovine filling, but from the crunchy toasted breadcrumbs and the umami of the sticky gravy.

This gets my veal of approval, just abouts.

Chocolate cake in restaurants is usually a waste of calories, but the flourless effort here was surprisingly winsome. Dense and smooth with a reasonably rich and strong bittersweetness, it actually tasted of something rather than merely relying on the placebo effect of its brown colour as with so many other chocolate cakes.

A hefty squirt of crème fraiche helped cut through the bittersweet richness.

Although Lina Stores’ restaurant isn’t perfect, with noticeable stumbles here and there, the main attractions are still wondrous to behold. If anyone ever claims that they’re bored of pasta, slap the fools silly, tie them up and drag their sorry carcasses down to Greek Street. Plonk their flabby arses on a stool and force feed their vacuous, stupid faces with beautiful pappardelle and pici until they see the light.

I hope Lina Stores’ restaurant lasts just as long as their deli. But even if it doesn’t, at least the focus and discipline of its kitchen are a shining example of how pasta should be done in this town.

What to skip: Porchetta

Average cost for one person including soft drinks and service charge: £35 approx.