To queue or not to queue

If you hear a deep, guttural howl of despair echoing across London, then fear not. It’s probably just me triaging my email inbox. If they gave out monetary prizes for inbox restaurant buzzword bingo, then I’d be swanning about the Maldives in a hover chariot made of moonrock. ‘Seasonal British produce’, ‘New York-style bar’, ‘gin’, ‘Michelin-inspired’, ‘pan-Asian’, ‘burgers’ and ‘chef trained by [insert name of celebrity chef here]’ are depressingly common and almost spitefully meaningless PR memes. Either it’s indicative of the low opinion that some restaurateurs and investors hold of London’s restaurant-going public or a sign that they have all the life experience and ambition of an inebriated gap year student from the Home Counties.

Hoppers is quite different from its more southerly counterparts. The wood-panelled interior is warm and inviting, as is the service. South London’s Sri Lankan restaurants tend to be far more ramshackle, both in decor and waiterly skill. However, Hoppers doesn’t take reservations and has, at most, 50 covers or so. Unless you get here early or late and have everyone in your party present, you’ll have to queue – sometimes with wait times long enough to dash down to Tooting for dinner and back again in time for dessert.

If you can time it right though, Hoppers is worth the wait. In the words of the Happy Buddha, my Sri Lankan dining companion, Hoppers is a ‘great, enjoyable experience’. But we’re getting ahead of ourselves.

If you order the Lamb Kothu Roti expecting the familiar fluffy disc of flat bread then you’ll initially be disappointed. It’s an eminently warming, flavoursome dish though with meaty morsels of earthy spiced lamb dotted with small feathery slices of roti and bits of scrambled egg. It could do with more lamb and roti rather than the excess of cheap cabbage and carrot filler, but it’s still a potent antidote to a cold winter’s night.

The smaller dishes shouldn’t be ignored. Croquette-like mutton rolls were crispy on the outside and pleasingly earthy and meaty on the inside. The umami and lightly spiced tomato sauce on the side made it even better. 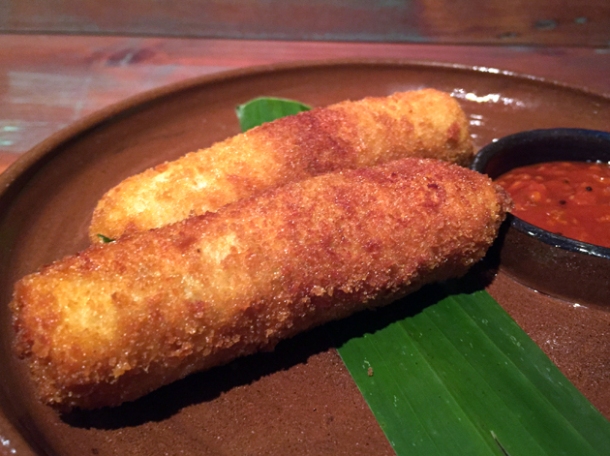 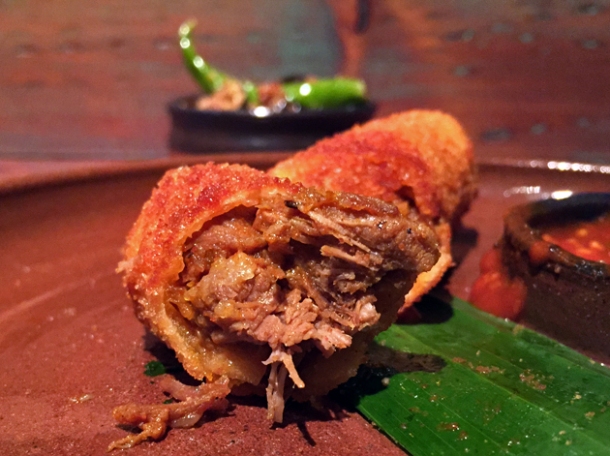 The hot butter devilled shrimps were small both in size and number, but the chunky, tingly, sweat-inducting hot sauce that they came bathed in was a very good consolation prize.

A good counterpoint to the heat of the devilled shrimps turned out to be the brinjal moju. This dish of pickled aubergines was surprisingly fruity and sharp – pleasing enough to make me overlook the subdued nature of the eggplant pieces themselves. 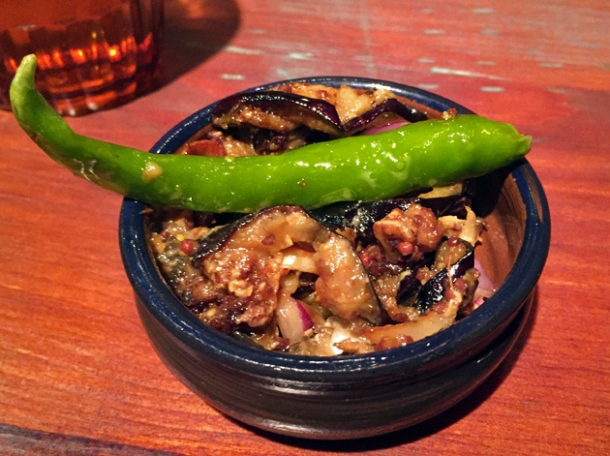 Objects in the mirror will appear far greasier than they actually are.

Desserts at many of Tooting’s Sri Lankan restaurants tend to be an afterthought, but not here. The roasted rice kulfi was not only cool and free from crunchy ice crystals, but surprisingly chewy too and literally topped with crisp rice kernels. Although the quivering jelly accompanying it was merely so-so, the firm and sweet rambutan pieces were top-notch as were the fragrant and musky sweet vermicelli noodles topped with sago. It’s a great, multi-layered, multi-faceted dessert.

If you’re a bit chicken, then your first instinct will be to avoid the chicken heart chukka. That would be a shame though – the kidney-like texture of the heart pieces was a pleasure to scoff down, even if they were interspersed with more pedestrian bits of thigh meat. They were made even better by the tingly sauce which packed a surprising amount of sweaty wallop.

Eat your heart out.

There aren’t any lassis available at Hoppers, but there is a curry leaf buttermilk drink which proved to be more than good enough for cooling down inflamed taste buds. Thin and lightly sour, it also had a little hint of spice to it.

The duck roti saw the flatbread filled with an anonymous minced meat, but this dish was still enjoyable thanks to the thin, mildly nutty and modestly spicy dipping sauce on the side. 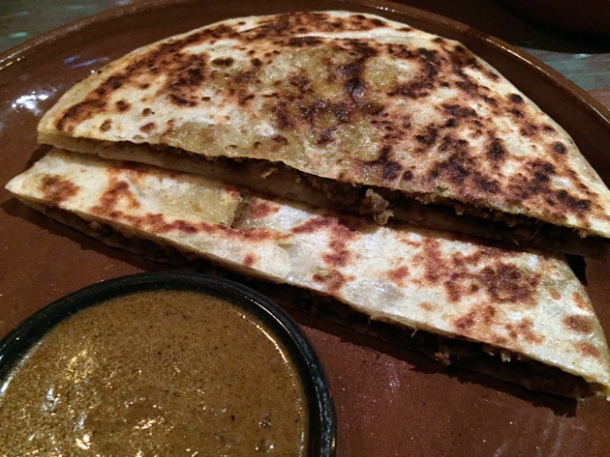 I’ve never been particularly taken with biryianis, but that was before I had Hoppers’ version of this classic dish. Although very tame in terms of spicy heat, the long-grained rice was moist and fragrant. The musky, succulent, gently stewed meat was occasionally joined to bits of connective tissue and accompanied by sultanas and bits of cashew. The entire layered mixture had the distinct but not overpowering taste of cardamom. A mild and buttery side curry dominated by a lone egg covered in a thin, chewy batter added more richness, while refreshing yoghurt and sharp pickled aubergine provided a palate cleansing respite.

Bury me in this buriani.

Curry as a side dish.

Milk Hopper, Kithul Treacle and Jaggery with Durian ice cream may sound like a string of words you’ve never heard before, but it’s actually a cracking dessert. A thin, slightly sour rice flour bowl filled with treacle and musky sweet jaggery would be a treat all on its own. Add in distinctly flavoured and smooth durian ice cream though and you have a classy, balanced dessert for the ages.

A sceptical Sri Lankan and issues of cultural appropriation

The Happy Buddha is not only my dining companion of Sri Lankan descent but also the only one with an appetite almost as ravenous as my own. All this made him eager to try Hoppers, even though he grumbled about the incongruity of a Sri Lankan restaurant financed and operated by the Sethis (the apparently north Indian family behind several other London restaurants including Bao) and the cultural appropriation this implies. My view is that as long as there’s no mislabelling or credit-taking and if the quality of the food is high and at least reasonably authentic, then bringing it to a wider audience is inherently a good thing – no matter who the money is.

The Happy Buddha started off rather grouchily, dismissing the mutton rolls out of hand – even though they were the same as they were before and, in my book, better than other versions of the same dish that he had introduced me to. He warmed to the hot buttered devilled prawns, although he noted that as a devilled dish the prawns should have been ‘dry’ rather than bathed in a sauce.

I could see glimmers of greater enjoyment light up The Happy Buddha’s cherubic features as he devoured the string hoppers, clods of rice flour noodles a little thicker than vermicelli. Topped with a fine-grained nutty sambal and a milky sambal that was unexpectedly coconutty to his palate, it soon disappeared in a blaze of spooning and chewing.

Hoppers is named not only after the string hoppers, but the bowl-shaped pancake-ish savoury crisp made out of fermented rice batter. Also available are the more familiar crepe-like dosas. Both were crisp yet yieldingly pliable and perfect for scooping up the curries, with the hoppers having an added sour tang. 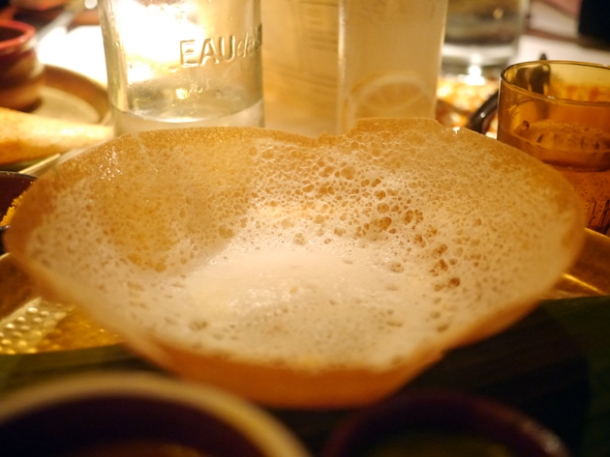 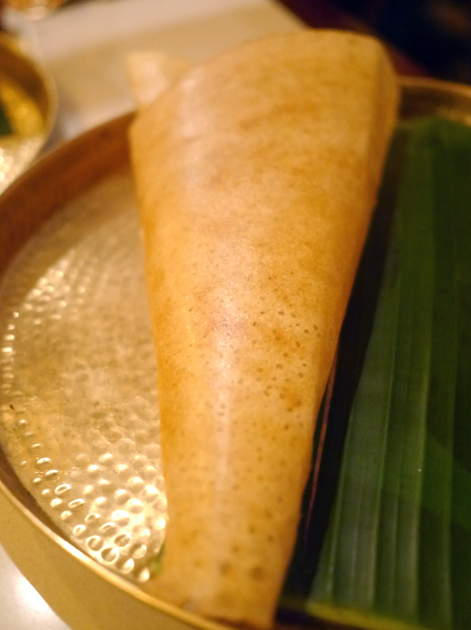 A dose of dosa.

Although dotted with large chunks of tender pumpkin, the red pumpkin curry was the least favoured of our kari trio as its thin, lightly sweet sauce was really neither nor there. The guinea fowl pumpkin was better with tender meat on the bone bathed in a moderately sweet and starchy sauce. The standout however was the black pork curry which greatly impressed the Happy Buddha – dense, unctuous chunks of pork in a lightly peppery and salty dry rub.

Pumpkin, not for bumpkins. 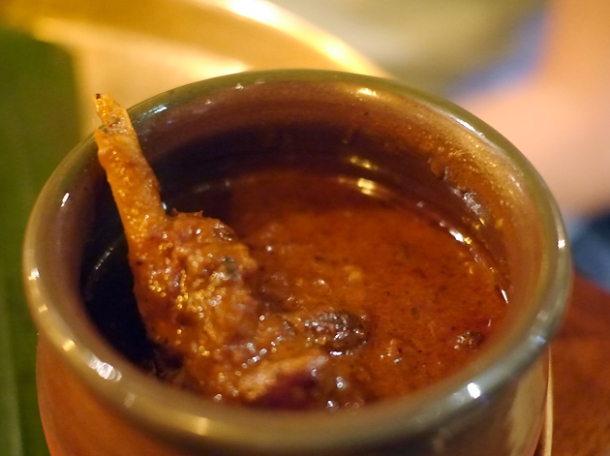 Chicken would probably have done just as well here.

Sorry for some of the iffy photos, folks.

While the Happy Buddha wasn’t quite as enamoured with the lamb kothu roti as he was with the black pork curry, that didn’t stop him from hoarding large spoonfuls of the stuff. Thankfully, the balance between lamb and roti pieces on the one hand and the cheap vegetable filler on the other was tilted more in favour of the former this time around.

Although other reviewers have waxed lyrical about the bone marrow varuval, I was far less enthused. Even after vigorous scooping, the amount and quality of bone marrow recoverable was meagre. Just give me a bucket load of the mildly spiced curry sauce and the soft, fluffy and thin roti accompaniment instead. 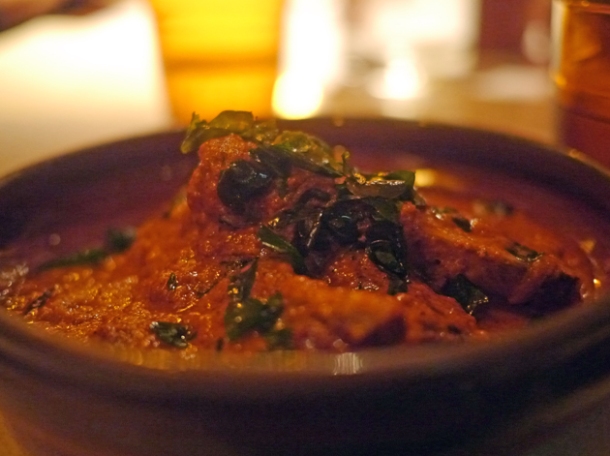 The egg hopper was literally a hopper with a runny fried egg plopped in the middle. Although breakfasty, topped with a dash of an unidentifiable spice and impossible to eat with any dignity, it was still enjoyable enough.

Love cake sounds like a euphemism, but it’s actually a very light cake that tastes as if it’s been steamed rather than baked. It was rather plain and inoffensive, especially when taken with the ‘yoghurt’ kulfi – an odd ‘flavour’ given that yoghurt is more of a texture than a taste.

Happy Buddha was especially impressed with the milk hopper with treacle, jaggery and durian ice cream which was just as good as it was before. He also approved highly of the Watallapam – essentially a very light and somewhat squidgy bread and butter-esque pudding tinged with cardamom and topped with yielding nuts.

That’s not a very big dessert, but a very small spoon.

It would be temptingly easy to grade Hoppers on a curve – it is, after all, the only Sri Lankan restaurant in Soho (or indeed any centrally located part of London that I know of). There’s no need however. It’s not only more than good enough to stand on its own two feet, it’s good enough to rival its cheaper but tattier Tooting-based competition. Although not completely authentic (according to The Happy Buddha), it’s close enough that it doesn’t matter.

It also deserves praise for attempting to popularise an otherwise grossly under-appreciated cuisine, throwing down the gauntlet to the unambitious competition coasting by on menus of burgers, fried chicken and avocado on toast.  If you can grab a table without waiting an eternity, then it’s certainly worth doing so – there’s nowhere else quite like it in the capital.

What to skip: Bone marrow varuval

Average cost for one person including soft drinks and service: £30-35 approx.