Holidaying by oneself can be a lonely experience, but it also gives a great degree of freedom – especially when it comes to choosing where and when to eat. Metamorfosi is a restaurant that would put many of my dining companions off – expensive Modernist food in a moneyed part of Rome. Socialist Worker and Templeton Peck would break out into hives just at the thought of it. Metamorfosi is far from snooty though – service was faultlessly friendly, polite and attentive without being overbearing while the sleek, angular decor was pleasing to the eye. It’s the sort of place where you bag gets its own stool. Presumably so it catch any scraps that fall from your table.The clientèle were interesting to people watch – from chortling middle aged couples to gossiping pretty young things.

Metamorfosi’s service was almost too efficient with a few of the early dishes piling up before I had a chance to devour every last drop. I barely had time to finish the thin, salty and fried wafers of crisp bread before having to move onto the amuse bouche. A slightly bitter yet unctuous cream was dotted with fresh prawns and crisp celery pieces. This unusual, yet highly pleasing combination of flavours and textures was followed up by a crusty hunk of pumpkin seed bread paired with a light and wispy, yet creamy and strongly flavoured olive oil butter.

Not your grandfather’s fried bread. 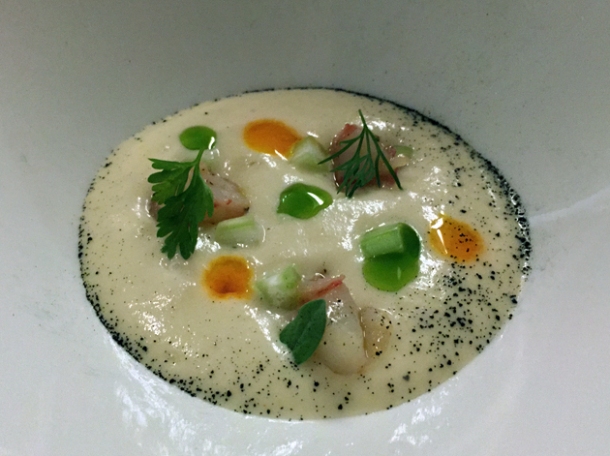 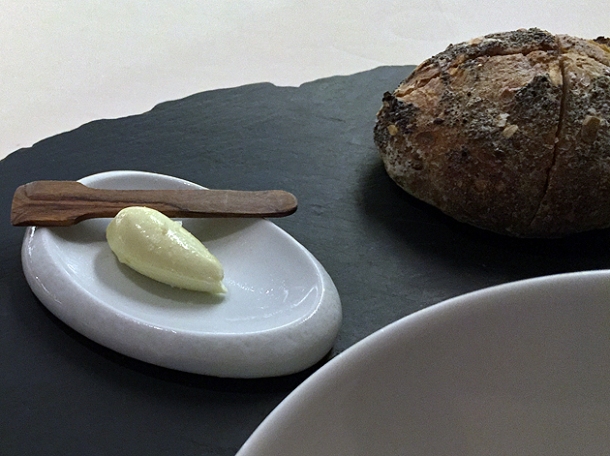 Pumpkin. Not just for pies.

Although Metamorfosi isn’t a seafood restaurant, seafood did pop up a lot throughout my meal. A pair of plump, fresh and zesty oysters served in their shells had their natural zing enhanced by an almond milk and foam as well as a hint of lemon. It sounds like a horrendous mismatch on paper, but in practice it worked wonderfully.

Although dense and meaty, the tuna came across as light and refreshing. The firm medallions were dressed with bitter herbs, mint, cream as well as a glob of zesty oil and wrapped in a chewy leaf. It’s an odd, but delightful dish well-suited for Rome’s often balmy weather. 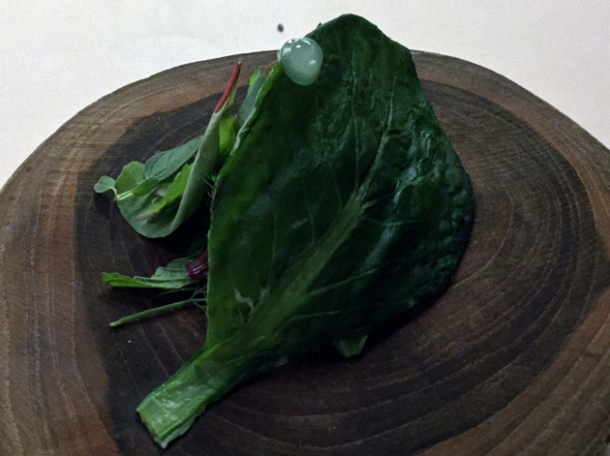 Turning over a new leaf.

The bread basket was small but constantly topped up throughout the duration of the savoury courses. Although coiled like a turd, the malty rolls were eminently scoffable as were the zesty, boldly flavoured aniseed rolls. The least impressive of all the breads was, surprisingly, the mini ciabatta. Although crusty and fluffy, it was also too chewy for my liking. The bread here wasn’t as good as the selection at Il Sanlorenzo, but it’s not too far off.

That’s a lot of washing up for a helping of bread.

He has given us… His shoe!

It seems that almost every Modernist restaurant in Rome insists on having its own re-imagined take on carbonara. Metamorfosi calls its version Carbonara 65 as the egg is apparently cooked at 65 degrees for 40 minutes. The end result wasn’t terribly impressive – a very runny but not especially rich egg. The rest of the Carbonara 65 more than made up for this though – a very cheesy yet light and airy foam matched with crispy, chewy bits of pork jowl.

The ‘ravioli’ was nothing so predictable as pasta. Squid skin stained with squid ink was loosely wrapped around red prawns like a shawl. The skin was more like cellophane noodles and gave way easily to reveal the prawns. Sadly, the prawns here weren’t as punchy as those at Il Sanlorenzo. The oyster and red pepper creams should’ve made up for this lack of crustacean flavour, but there wasn’t enough of either cream to leave much of an impact. It’s still a reasonably zesty, sharp and refreshing dish, but it has the potential to be even better.

Out of the darkness and into the light.

A second ravioli dish was a little more traditional – a lone ravioli filled with a whole dried cherry tomato. It was very muted though, leaving it to the creamy, elastic buffalo mozzarella to take the limelight. The mozzarella was made even better by a strip of thin, translucent and smoky prosciutto and milky mascarpone sauce. All of these other components were spot-on, leaving the disappointing ravioli sticking out like a sore thumb.

Blessed are the cheesemakers!

A risotto of firm, large grained and subtly creamy, moreish rice was topped with nutty, warming allspice and a thin, yet meaty layer of beef. The beef was too thick to be a carpaccio and was more like a prosciutto of sorts. In any case, its inspired presence here was the piece de resistance of an irresistible risotto.

Yes, this is a risotto. And what a risotto it was.

Seafood resurfaced one last time in the form of sweet and smoky eel accompanied by cous cous-like spelt and caramelised onions. It was the accompaniment of tomato and vinegar ice cream that stole the show though. The iciness was weird at first, but its sharp umaminess really did enhance the smokiness of the eel. The downside was that the texture of the eel quickly stiffened as it was exposed to the coldness of the ice cream, almost resembling a jerky. It’s a weird experiment, but a generally successful one that I’d be more than willing to savour again and again.

Jellied eels are due for a comeback. Even if the fish itself is creepy as hell. 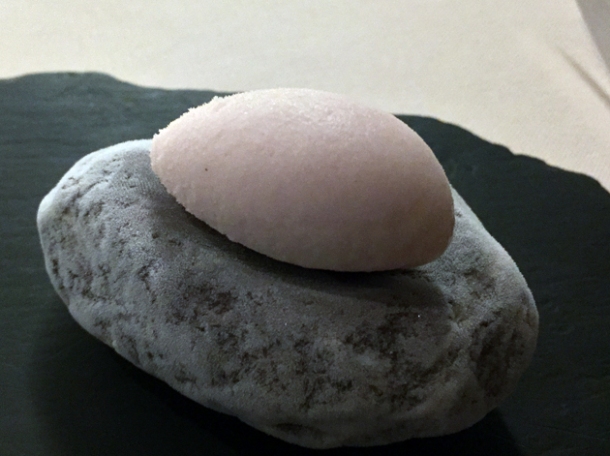 Tomato and vinegar ice cream served on a stone. The line between Modernist art and cuisine is sometimes a fuzzy one.

The one sop to weeping, fragile, needy carnivores were lightly salted slices of iberico pork cooked rare. The natural sweetness of the pork was muted, but it was still very tender. The firm potatoes provided both a contrast in texture and a lot of carby bulk, but the parsley sauce and lightly sweet chipotle and prune chutney didn’t really suit either the pork or the potatoes.

Slates. Why did it have to be slates.

The taste of prunes turned up again in the first dessert, a lollipop with more to it than meets the eye. The prune-like sweetness of the porto-based sauce contrasted nicely with milkiness of the white chocolate shell and the small tangy hint of gorgonzola at its centre.

A selection of fresh summer fruits and a tart raspberry jelly garnished with breadcrumbs was even better when taken with spoonfuls of crisp, refreshing melon juice. This fruity concoction wasn’t too sweet, but a sharp and icy counterpoint was nonetheless present in the form of a scoop of dill ice cream. Its flavour was very muted, but it didn’t detract from what was, overall, a well-constructed palate cleanser. 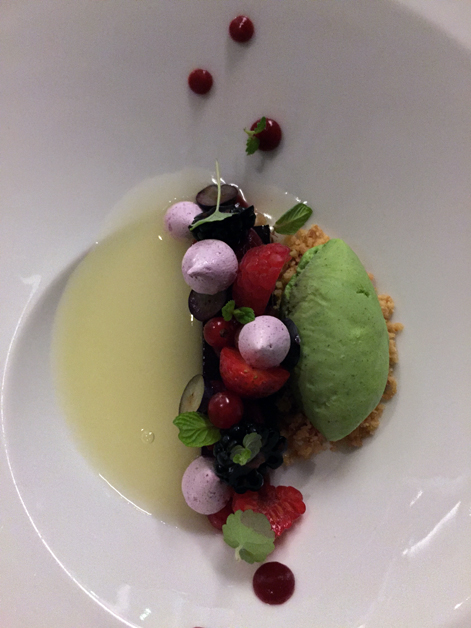 The petit fours were generally satisfying and well-constructed enough to qualify as a proper third dessert in their own right. The dark chocolate lollipop had a hint of smoke to it, while the orange and cardamom jelly tasted mostly of cardamom with a hint of candied citrus to it. The almond biscuit just turned up. 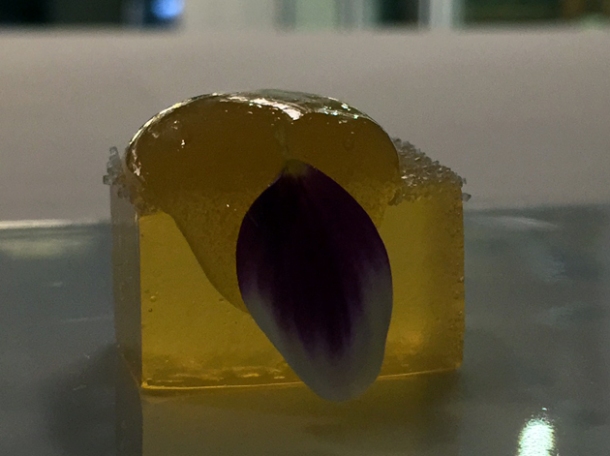 The surprisingly light tasting menu at Metamorfosi wasn’t perfect and it lacked a truly satisfying signature dish, but the innovative quirkiness of the kitchen is a pleasure to behold. With further refinement, Metamorfosi could become a blockbuster dining destination. For now though, it’s a great place to sample some delightfully quirky cooking in soothing surroundings. As consolation prizes go, that’s far from bad.

Web: http://www.metamorfosiroma.it/index.php?page=0 (only the downloadable menus are in English at the time of writing)

Average cost for one person including soft drinks and coffee: €120