The temperature at which hope burns

Menus are funny things. As restaurants have become more casual, pared back and minimalist, so have the menus. 64 Degrees, an outpost of the Brighton original and attached to the Artist Residence hotel, is a good example. While its menu isn’t quite as terse as the one at the Bubbledogs Kitchen Table, it’s still an exercise in brevity. Items such as ‘chocolate, caramel’ and ‘oyster, seaweed’ are vague promises shorn of verbs and adjectives. The friendly, welcoming staff are more than happy to go into fill you in if you wish, but I went in blind on both of my visits plucking the first dishes that caught my fancy. Bear in mind that the menus changes frequently and the tapas-sized portions are designed to be mixed and matched.

The cheek, pineapple and coriander was the first of many surprises. The cheek arrived in the unexpected form of a soft porky terrine. It was very pleasing, but the accompaniments of slightly charred pineapple, chewy pork rind and a mild coriander sauce added little to the dish. 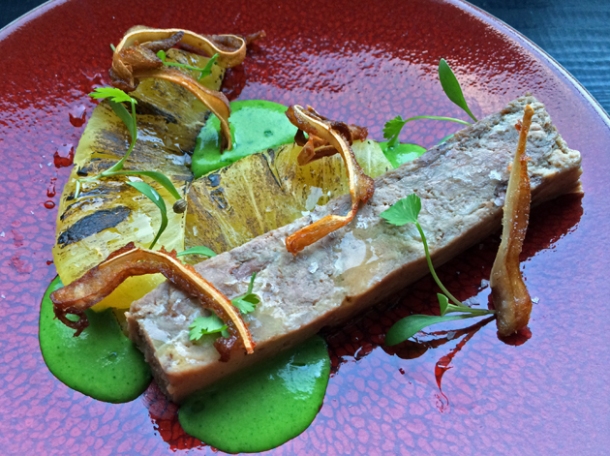 I wasn’t sure what to make of the odd prawn cracker-like wafer that accompanied the mackerel, but the fish itself had a delicate, bouncy texture. Whatever taste the fish had was sadly overwhelmed by the surprising spiciness of the avocado sauce. 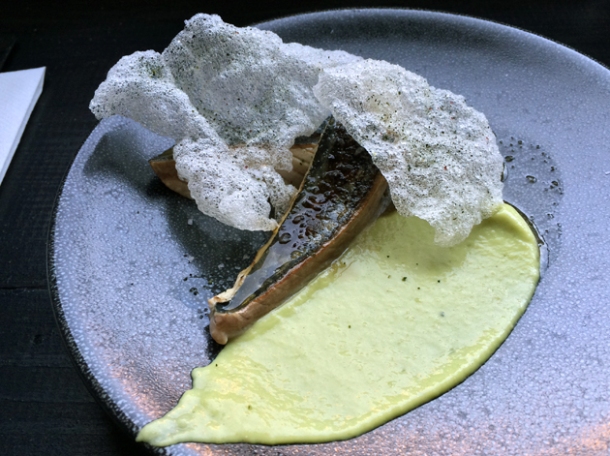 Fish out of water.

If I awarded kudos based on size alone, then the potato knödel, cabbage, smoked butter would romp home with an olive wreath and a gold medal. The bitter taste of the slick, lightly charred cabbage leaves was accentuated nicely by the smoky creaminess of the butter, so it was a shame that there wasn’t enough of the latter. The potato knödel were a soft, fluffy and oil-free version of tater tots but they didn’t really compliment the cabbage, nor did they contrast with them. The entire dish felt like a gussied up version of a student’s dinner prepared in a state of drunken poverty.

What next? Fish fingers and custard?

The ‘stovies’ was a disaster on a plate. The beef short rib was served off the bone, with the beef far too dry and even a little tough. This toughness even extended to the bland bottom layer of collagen, usually tender and flavoursome. The thin and buttery potato dauphinois and beetroot sauce, or at least what I assumed was beetroot, were by far the best parts of this dish but they couldn’t rescue this bovine travesty. 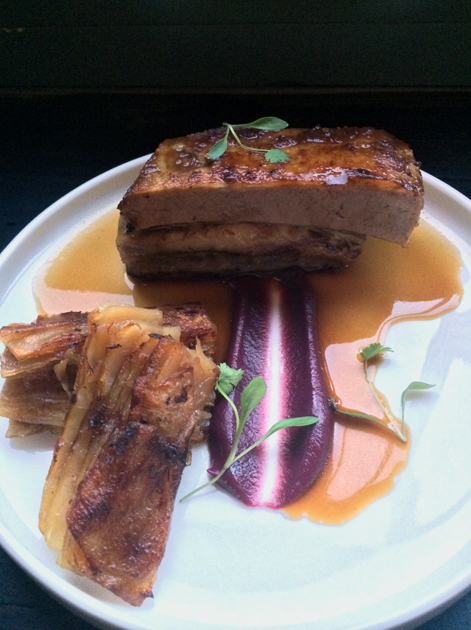 My dessert of banana, malt and miso was nothing if not boldly flavoured. The chunks of banana were almost too sweet, but it was offset nicely by the addictive but unidentifiably anonymous ice cream. The treacly ‘malt’ smear proved to be this dessert’s undoing though – its salted caramel taste was lip-pursingly salty and overpowered the other two elements. 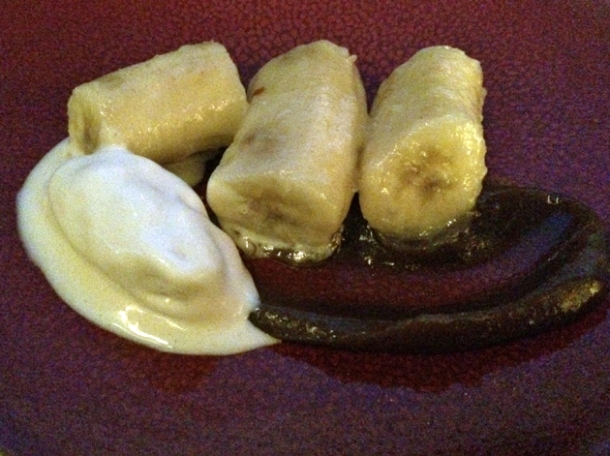 My first meal at 64 Degrees was a disaster, but we all deserve second chances. My second dinner got off to a faltering start with the tomato, bread and oil which was effectively a de-constructed version of pan con tomate, a tapas classic. The cubed tomatoes were bursting with umami herbiness, while the light cream somehow captured the taste of fruity sweet olive oil. Sadly the bread, presented in a mini cloth sack for some completely unconvincing reason, was a bland and stodgy brick that tended to obscure the taste of the tomatoes and the cream.

The open plan kitchen, visible from the counter seating, loves to use blow torches. Butternut squash and peppers were blowtorched, effectively bringing out their sweet and tender side, even if the heat subsided so quickly that the vegetables were cold by the time they reached me. They still tasted good, but far less convincing was the ho-hum aubergine puree which can’t compare to a good baba ganoush. 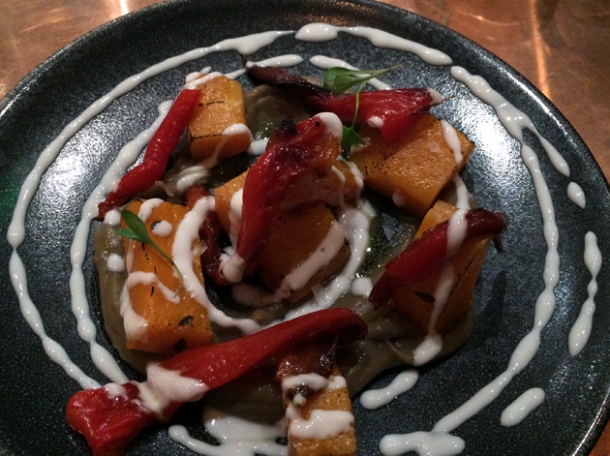 The pre-shucked oysters are priced at a very reasonable £2.50 each. Although I wouldn’t bet on it, I’m guessing the oysters I had were natives rather than rock oysters due to the brine-y taste and smell yet fleshy bodies. The blobs of accompanying seaweed had apparently been tinged with ginger and whiskey. While its herby sweet moreishness was delicious, the oysters were perfectly enjoyable on their own and the brine-y taste of the molluscs obscured the taste of the seaweed anyway.

The venison was easily the best dish of my second meal. The small yet thick medallions of meat, cooked rare, were tender and slightly earthy. The meat was complimented nicely by the a tangy, slightly sweet ketchup while the accompanying celeriac chips were thick cut with a firm bite and a tender follow through. 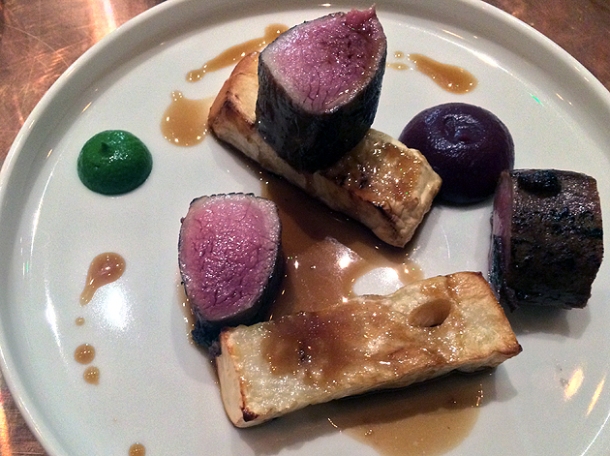 Why can’t everything at 64º be this good?

The ‘chocolate, caramel’ dessert was a close second. The molten dark chocolate cake was rich, while the dollop of ice cream was nutty and gently sweet without any bracing iciness. The dusting of crushed white and dark chocolate pieces didn’t provide any contrast in texture or an extra layer of flavour though. As a result, this dessert just doesn’t compare to Gauthier’s Golden Louis XV which remains the cleverest, most decadent, passionate love letter to chocolate that I’ve experienced to date. Still, it’s good enough in its own right. 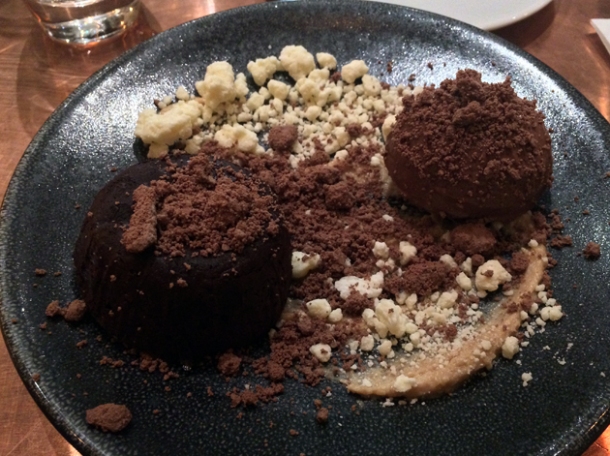 There are hints of potential at 64 Degrees, but for now it has a long, long way to go in matching London’s other casual yet elegantly sophisticated restaurants from Duck Soup to 10 Greek Street. The hit and miss menu is so inconsistently executed that I’m genuinely perplexed by the uncritical praise lavished upon the Brighton original. The area around Victoria is in desperate need of high quality yet informal restaurants, but 64 Degrees will need more than a copper-topped counter and booths hewn from unfinished wood to meet it.

What to order: Venison; oysters; chocolate and caramel

What to skip: Stovies; banana, malt and miso

Average cost for one person including soft drinks: £45-50