Restauranteurs must rack their brains for weeks on end to come up with the names of their restaurants. Some create vaguely Latin-sounding names, while others simply name their businesses after the address as is the case with 10 Greek Street. This small Soho-based restaurant may lack an original name, but that hardly matters given the quality of its food.

The rectangular dining room is a small, cosy place. Reservations are only taken at lunch time, but if there’s just one or two of you, and you’re willing to forgo a table, then you can often get a seat at the bar overlooking the kitchen at the back – the best seat in the house. Service is reasonably efficient, if not especially warm.

I first dined at 10 Greek Street back in the summer with the Flame Haired Squelchie. She started off with a pair of fluffy, slightly chewy tube-shaped gnocchi wrapped in buttery aubergines and served with sweet tomatoes. A simple but tasty starter.

As snug as bugs in a rug.

My own starter was also a simple but effective one. The pairing of soft, offaly, fairly dense duck hearts with soft, flavoursome artichokes was an inspired one – the tastes and textures of both meat and vegetable complimented each other well.

Getting to the heart of the matter.

Both the Squelchie and I are big fans of polenta and 10 Greek Street’s version was fluffy and creamy. The mildly earthy taste of the girolles and truffles were flavoursome, but not too strong so they didn’t overwhelm the relative delicacy of the polenta. The rocket wasn’t really necessary, but even so this was a well-judged dish even if it was a bit on the small side.

Polenta, food of the gods.

My own main course of baked sea trout tasted, unsurprisingly, a lot like salmon. It wasn’t as stodgy as that fish though and had a glisteningly pink centre that was only just cooked. It had been paired with a creamy courgette flower that had been filled with fresh crab head meat and deep fried. The crisp vegetable and its light yet meaty filling was the most enjoyable part of this dish. The sea trout was good too, but the two parts didn’t really seem to suit and compliment each other.

Trout and Crab. Sounds like a fishermen’s pub or something.

For dessert Squelchie opted for a raspberry and almond tart served with crème fraîche. Although the crust was delightfully crumbly, the sweet, sharp, nutty flavours of the tart weren’t quite as intense as I would’ve liked.

My own dessert of lemon posset topped with a poached peach was more successful. Although the soft posset wasn’t sharp enough for the Squelchie’s discerning tongue, I thought it just sharp enough to compliment the intensely sweet, quivering peach without overwhelming it. A delight.

The weather was significantly chillier when I revisited 10 Greek Street, this time on my own. The cooler weather made sitting at the kitchen-facing bar a brisk experience, but the bread basket stuffed with nutty brown bread, flavoursome thyme-tinted white bread and a pair of fruity and salty olive oils made up for this. 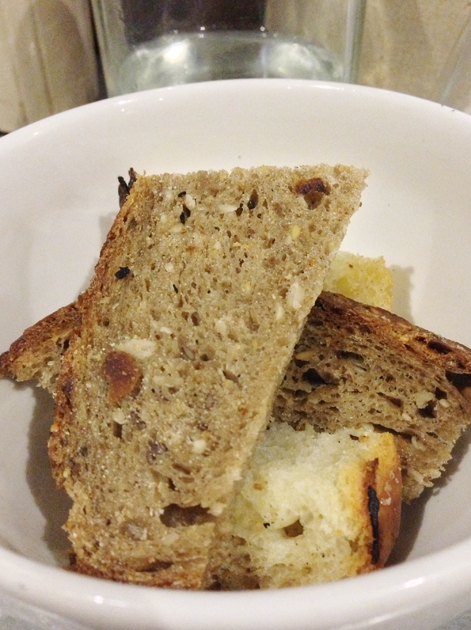 It may not look like much but the confit goose salad is a thing of beauty. The fatty, meaty slices of goose were so dense they were almost like beef or pork so pairing it with light, sweet slices of clementine was inspired. The contrast between the meat and the fruit may have been stark, but this made them even better bedmates. The dabs of hazelnut cream weren’t quite as strongly flavoured as I would have liked, but they were still creamy and nutty enough to compliment the goose.

Mother Goose was a tasty bird.

Black pudding is surprisingly easy to do badly, but that thankfully wasn’t the case here. Although it’s not the best example of black pudding I’ve had, it’s still pleasingly soft and coarse. Its mild saltiness makes it a good match for the rich, runny eggs and the chewy, moderately earthy mushrooms.

If you’re expecting Greek food then you’re going to be disappointed.

Garlic bread is often the preserve of cheap, nasty pizzerias, but it was airy, flavoursome and not at all greasy here. It was a tasty counterpart to a hearty chunk of dense, woody pheasant. A touch of sweetness and acidity was provided by the comically large shallot and I’m always a sucker for wrinkly kale. A hearty, warming and tasty dish.

I couldn’t squeeze the giant shallot into frame.

Ginger and chestnut cake sounds like a heavy, stodgy thing, but that was far from the case. It was light, airy, fluffy and almost crumbless. The cake had the distinctive sweetness of chestnut and the heat of ginger, but each of these elements was surprisingly muted. More dominant was the sweet, tangy, viscosity of the crunchy butterscotch, while the slightly sour crème fraîche added a refreshing element. A good dessert that could have been even better. 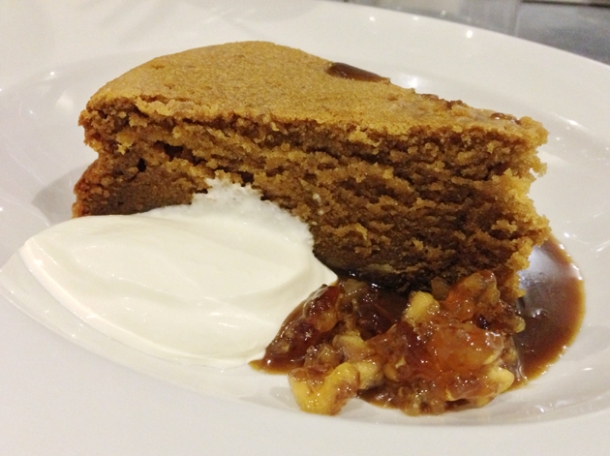 The food at 10 Greek Street isn’t perfect, but it is very good and reasonably priced too. The place greatly reminds me of Duck Soup – small, simple but incredibly alluring. I’ll be back.

Reservations: essential for lunch; not taken for dinner

Total cost for one person including drinks: £35 approx.