Taipei is an almost effortlessly modern metropolis and that’s reflected in many of its restaurants which are sleek, modern, air-conditioned places. If you fancy a break from this unbridled modernity then it’s worth seeking out Taipei Shin Gu Shiang. The small entrance, festooned with wooden bric-a-brac, is easy to miss and getting to its little corner of the city can be a trek until the nearby Daan Park MRT station is completed later this year.

It’s worth doing though, if only for the thoroughly old school atmosphere. The brick and wood panelled walls of the handsome dining room are decorated with Taiwanese movie posters of yesteryear while Mandopop and a small fountain tinkle away in the background. There’s no air conditioning though with the only cooling provided by some ceiling-mounted fans. Still, if Templeton Peck and I can put up with the heat then you certainly can too.

Atmospheric. If only because there’s no air con.

The restaurant is run by a middle-aged bloke and his missus who, in contrast to the effervescent hospitality so abundant elsewhere in Taiwan, are charmingly grumpy yet efficient. I warmed to them because of their slightly brusque, uninterested demeanour, not in spite of it, since it reminded me of home (I’m not being sarcastic here, I mean it).

There’s no menu at Taipei Shin Gu Shiang – cough up NT$200 and you get a selection of the day’s dishes brought to your table. There’s an unlimited supply of water, tea, rice and soup at the buffet bar. The tea is nothing to write home about, but the steamed rice drizzled in pork oil (liquid lard if you will) was very moreish. The medium-sized grains of rice clump together under a drizzling of oily meatiness. The clear, tangy chicken vermicelli soup hits the spot too. 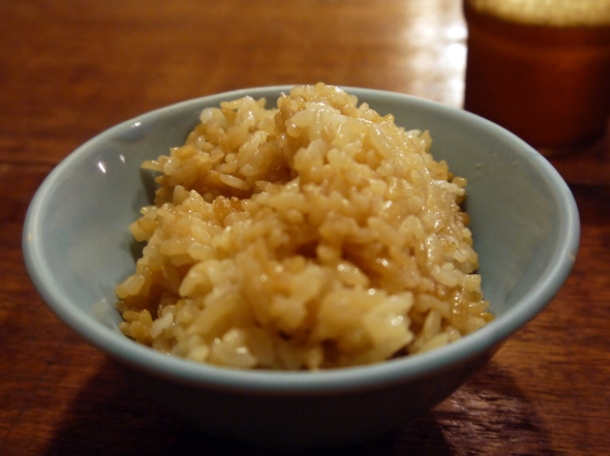 The slices of pork stir fried in a spring onion and tomato sauce was rather forgettable and unsatisfying. 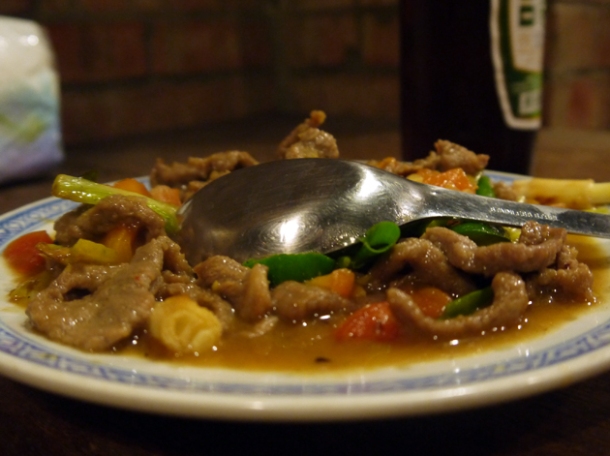 I should’ve moved that spoon before taking this photo.

More successful was the fish simply grilled and flavoured with shallots and spring onions. Although the fish, which I’m pretty sure was pomfret, wasn’t especially meaty what flesh there was tasted milky and was tender too.

The mildly bitter greens stir fried with a bit of ginger was a refreshing companion to the heavier pork and fish.

Taipei Shin Gu Shiang is a cheap and filling experience, but the the place is more about the charmingly ramshackle atmosphere than the food which, while satisfactory, was a little too simple to be especially remarkable.

Total cost for one person including soft drinks when shared between two people: NT$230 (approx. £5 at time of writing)