Piccadilly gets yet another steakhouse

If there’s one thing that Piccadilly doesn’t have any shortage of (apart from tourists of course) it’s steakhouses. There’s the flagship branch of gaudy chain Gaucho, an excellent seafood-themed outpost of Hawksmoor and now a branch of Danish chain MASH. Fans of the Korean War sitcom may be disappointed to learn that MASH stands for Modern American Steak House.

MASH is absolutely huge – once you’ve descended the surprisingly large and twisty staircase you come to a spacious foyer and a cavernous underground dining room. The mammoth, high ceilinged room is broken up into smaller, more human spaces by glass partitions and there are a couple of private dining rooms and areas. The lush red furniture, dark wood panelling, art deco-ish lighting and meat display cases give the place a vaguely Vegas-ish feel, although I could have done without the repetitive dance music soundtrack.

One of MASH’s auditoriums. I mean one of its private dining rooms.

I started off with the steak tartare (or MASH tartare as the menu insists on calling it) which had a slightly peppery, chilli taste to it but the texture was too smooth and bitty with not enough bite for my liking. For reasons known to no one, the steak tartare was served with crisps. I’m not sure whether these are for scooping, or perhaps the kitchen got a good deal on them at the cash and carry, but as well as being superfluous they tasted borderline stale. 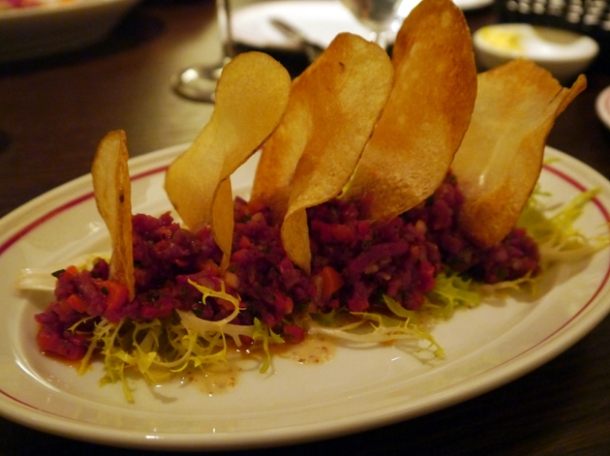 Templeton Peck was pleased with his foie gras terrine although I wasn’t as enamoured with it as he was. Although soft and buttery, it wasn’t as rich as I was expecting and lacked the depth of flavour present in the very best foie gras dishes. I suspect it wasn’t made using whole goose liver, the lesser duck variety was probably used, but I’m not 100% certain. 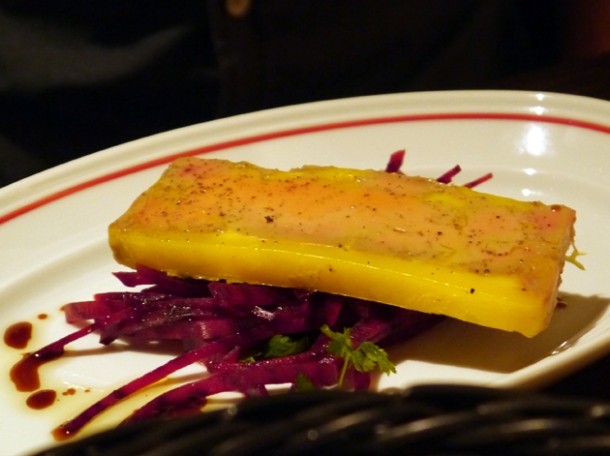 You won’t find this in California.

By far the best of our starers was Veal Smasher’s choice of veal sweetbreads. Although the version occasionally served at the St John Hotel are better, the sweetbreads here are still tender, buttery, slightly herby and have a gently pleasing offaly taste.

The best starter here by far.

Although someone jokingly suggested ordering the burger or the fish, all four of us ordered steak in the end. Fans of sustainability and food with low carbon foot prints (such as The Bastard who is tediously and monotonously didactic at the best of times) will be displeased to discover that MASH serves up Danish, American, Australian and Uruguayan steaks.

Veal Smasher was intensely pleased with his Nebraskan New York Strip served medium rare. It was incredibly tender and soft, requiring very little cutting effort. It was also succulent but, like the neighbouring cut of sirloin, it’s not especially flavoursome – it’s all about the tenderness. 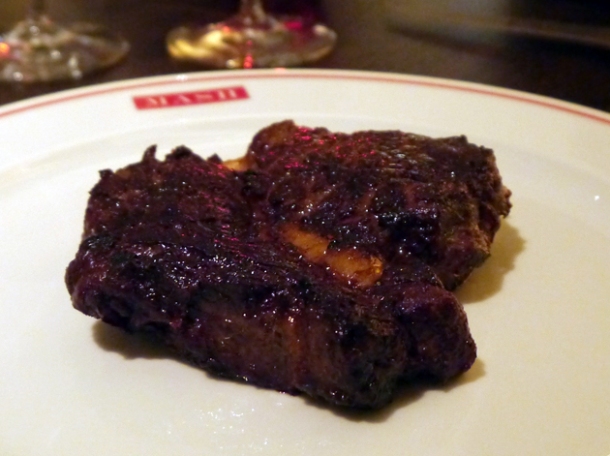 I’ve now been told that I can’t use the term ‘steak olympics’ as it violates trademark law. What do you mean it’s too late for weak-ass Olympics-related jokes?

Although our steaks were excellent, our accompanying side dishes were underwhelming. The creamed spinach was fine if unremarkable, while the thin chilli fries barely had any kick to them.

If you prefer chips to fries then there are chips on the menu. The thick slices of potato are soft both on the inside and the outside. They’re not too salty, but they are a touch too oily. Not bad overall, but they pale in comparison to Hawksmoor’s triple cooked and beef dripping chips.

If you’re a steakhouse and you can’t match Hawksmoor’s triple cooked or beef dripping chips, then just give up now.

The bone marrow should have been a perfect compliment to any steak, but the puréed baby food texture was all wrong and it was also far too salty. Disappointing.

Shouldn’t there be mash at MASH?

Minipan. I have always liked pancakes.

Veal Smasher’s chocolate cake was similarly underwhelming. Served with the same vanilla ice cream, the cake had a top layer of ganache sitting on top of a bigger bottom layer of soft sponge although both were lacking in both taste and texture.

MASH gets a four star rating based purely on the quality of its excellent steaks. The starters, side dishes and desserts were almost uniformly disappointing and the less said about the doormen the better – there are ex-Stasi officers that are friendlier and more welcoming – and you’ll either love or hate the swaggering decor. I suspect that the questionable atmosphere it creates, along with the high prices, will lead MASH to become the domain of chortling City boys out on the lash, moneyed Euro tourists and Gaucho refugees while everyone else heads to a cosier Hawksmoor instead.

Total cost for one person including drinks and service: £77 approx.

One thought on “MASH review – a Danish steakhouse in London”