Clerkenwell’s meat palace opens a branch in the West End, but does it have the same magic as the original?

The huge glass block that is the new W Hotel now dominates Leicester Square overwhelming everything else. It offends the very aesthetic fibre of the Lensman’s body. Interestingly the W Hotel literally overshadows another new hotel – the much smaller St John Hotel which also houses a restaurant offshoot of famed carnivore’s favourite St John of Clerkenwell. I have a rather sceptical view of most hotel restaurants, but with a pedigree as fine as St John’s, I had to give it a go.

The stark white, minimalist dining room is considerably smaller than I expected with room for only a couple dozen covers at most and a view of the surprisingly small kitchen. Since the Euro Hedgie and I paid a visit on a Sunday evening the atmosphere was rather muted with only a handful of couples and a family sharing the space with us, but it’s all refreshingly informal. Apart from the slightly brusque besuited maître d, who may have been either simply tired or deliberately sarcastic, the kitchen white-clad staff were unfailingly helpful and friendly.

The ever-changing menu at the Leicester Square St John is noticeably truncated compared to the longer one at the Clerkewell original. It had a hearty, wintery feel which the Euro Hedgie suspects is due to the original pre-Christmas opening date which had to be pushed back to just a week prior to our April visit.

Plenty of dishes, many of which are traditionally British despite their unfamiliarity, piqued our curiosity. The Euro Hedgie started with the Pressed Pig’s Head with Radishes. Despite the unsavoury name, the Pressed Pig’s Head, also known by a number of other names including brawn, pork cheese and potted head, is simply a terrine made from various cuts of meat and aspic. The soft, but not too soft texture was pleasing, with some subtle herby hints and a not-too-salty taste. The radishes were surprisingly muted, but they were there to provide a contrast in texture with their crispy crunch. 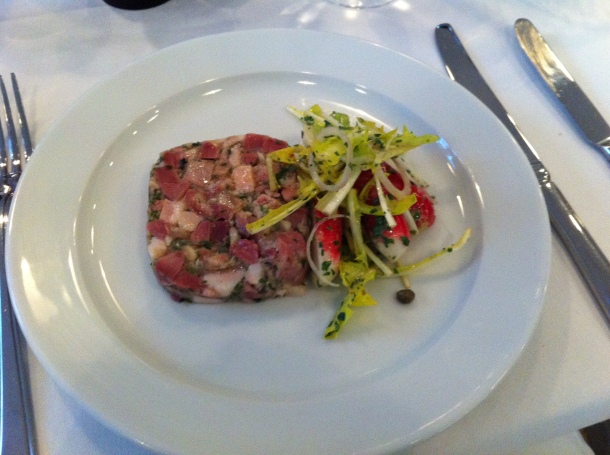 I opted for the lamb sweetbreads with butter beans and leeks. Sweetbreads aren’t actually baked goods but the lesser organs of the animal, such as the pancreas and numerous glands. The small, soft and tender bits of meat had a gentle offal-like taste reminiscent of liver or kidneys and blended well with the creamy butter beans.

Why are they called sweetbreads?

Veal are baby cows, but they have surprisingly large tongues if my serving of veal tongue is anything to go by. The tender tongue was succulent and had a slightly fibrous texture. It was made all the better with the sweetness added by the beetroot chunks. Simple, but scrumptious. 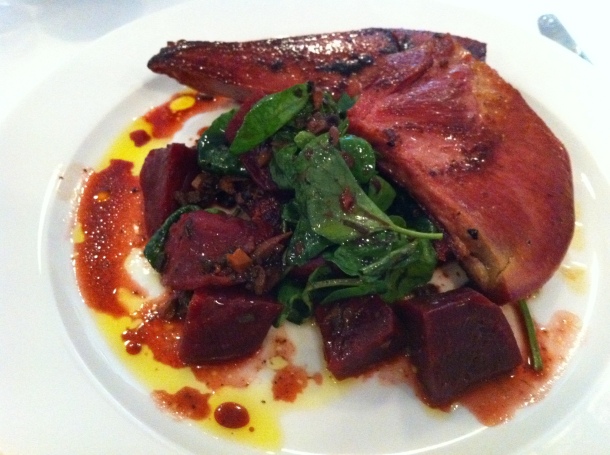 The Euro Hedgie plumped for the tripe and onions which comes with a serving of not-too creamy, fluffy mashed potato. The breadcrumb topping gives it the appearance of a fruit crumble, but it’s stomach offal through and through. I’m used to the strongly flavoured Chinese tripe dishes which derive much of their flavour from hearty stocks and tend to have a slightly chewy consistency. I was therefore pleasantly surprised by the soft texture and subtly creamy, delicate taste of the tripe. Although tasty, I could see the Euro Hedgie’s interest in the dish ebb slowly away as he worked his way through it. It’d work much better as a starter. Plus, at £16.50, it’s pricy for a dish made using such cheap ingredients. 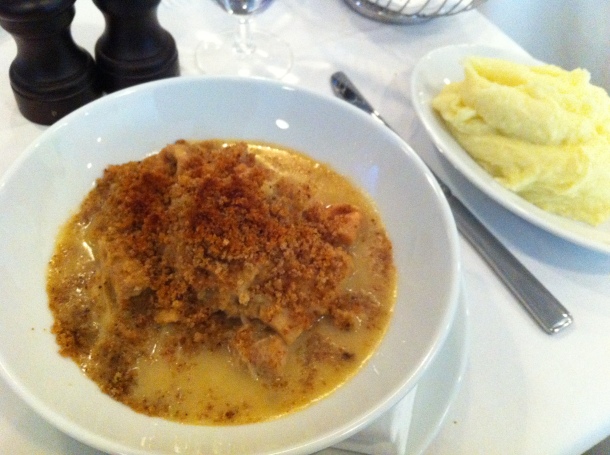 The Euro Hedgie was stuffed, but I had to have some dessert and chose the ginger loaf with bay leaf ice cream. The ginger loaf wasn’t as spicy as I was expecting, but it still had a nice kick to it as well as a tangy molasses-like sweetness enhanced by the drizzling of sticky caramel. The bay leaf ice cream didn’t taste much like bay leaf, but did have a surprisingly tart taste which almost made it resemble yogurt more than ice cream. Overall, a boldly flavoured dessert, especially in comparison to the other, more delicately flavoured dishes.

Ginger loaf and bay leaf ice cream. If you can’t tell which is which, there’s nothing I can do for you.

I’ve used words like subtle and delicate a fair bit in this review. That’s because the food at St John, both at the new Leicester Square outpost and the Clerkenwell original, tend to be gently balanced combinations of flavours, rather than strong, bold tastes and for the most part those flavours really do work. It’s not cheap, especially if you order alcohol which we did not, but if you’re a genteel, open-minded carnivore then you owe it to yourself to check out St John.

Total cost for one person including free tap water: £33 approx.