This review of a Vienna restaurant is a break from The Picky Glutton’s usual London-based coverage.

Steirereck is an unusual restaurant since its premises are located within one of Vienna’s city parks – the Stadtpark. The Stadtpark isn’t Vienna’s most picturesque green space and the exterior of Steirereck’s building isn’t much to look at either, but that all changes once you enter the subdued dining room. The gilded flower-like light fixtures are tastefully elegant and there’s much to be said for simply staring out the window, admiring the pale, golden, winter sunshine as it shimmers off the leaves of the trees outside. 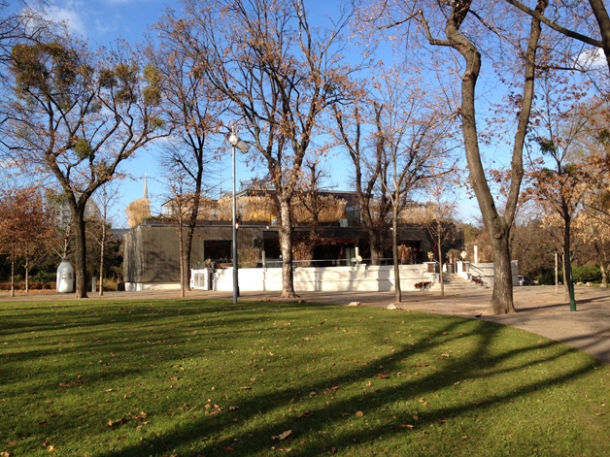 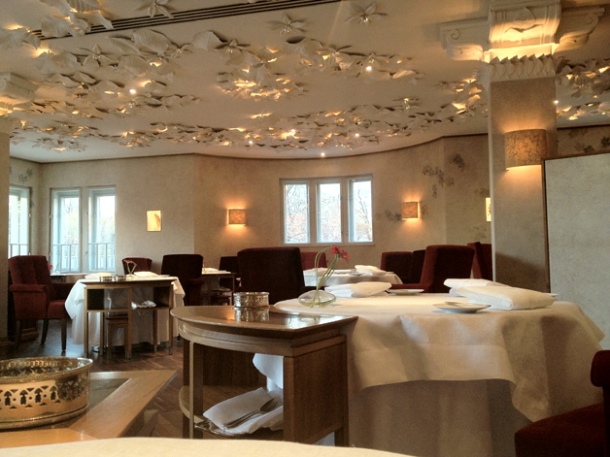 Steirereck has a vaunted reputation as not only one of Vienna’s finest restaurants, but also one of the best in the entire world. It’s hard for any establishment to live up to such a grand billing, but if meeting that measure were judged purely by the warmth and friendliness of the staff then Steirereck would win hands down. The attention-to-detail of my waiter was almost second-to-none – he was eagle eyed enough to spot a lone loose thread on my table cloth and snipped it swiftly.

If I had been a sensible glutton, I would’ve ordered a la carte or gone for one of the smaller set menus but there’s no such thing as a sensible glutton so I dived straight into the full seven course tasting menu. This turned out to be big enough of a feed that I didn’t need to eat anything else for the entire day which is just as well given that eating at Steirereck isn’t cheap.

Austria and the rest of the German speaking world takes its bread very seriously and there’s a vast selection of the stuff available at Steirereck with a very knowledgeable bread sommelier (for the lack of a better term) to guide you through all the choices. The highlight for me was the delicately sweet slices of honey, rye and lavender loaf.

Celery has a reputation as a rather bland vegetable, but the example here was surprisingly sweet which was balanced out by the dipping salt. It did feel a bit silly snapping off pieces of celery from the stem in such a formal environment, but for such an interesting and fun snack I’ll make an exception.

The amuse bouche were nothing if not visually arresting. A sweet citrusy fruit, almost certainly a kumquat, was served in a chocolatey-looking powder that was actually quite spicy. Although it sounds unusual, as with the sweet and salty celery, the combination of sweetness and spiciness works surprisingly well.

The inventive pairing of contrasting flavours continued with a delicate, crisp chestnut pastry served with a raspberry and strawberry sorbet served on a stick. It’s another bizarre sounding pairing, but the combination of the delicate nuttiness of the chestnut pastry and the tart sweetness of the sorbet worked very well.

Sorbets turning up when you least expect them - an unusual trend in my Viennese meals.

Meat lovers may be worried about the absence of animal flesh thus far, but there’s plenty of meat courses and the first of which was a thin and delicately crispy pig’s head. The sharpness of the beetroot sauce cut right through the fattiness of the meat, helping to cleanse the palate for the next course.

One trotter ahead of the other.

One of the highlights of my meal at Steirereck was the peppers stuffed with cabbage, chilli, snails and tomatoes. The sharp and refreshing taste of the vinegarish peppers was balanced out by the sweetness of the tomatoes, while the slightly chewy snails not only added a contrast in texture but had a slightly boozy hint to them which added another layer of flavour.

Just as tasty was the broccoli served with smoked curd cheese. The crisp, occasional sharp and vinegary taste of the broccoli contrasts nicely with the slightly smoky creaminess of the cheese. Some pecans added some crunchiness to what would otherwise have been a flavoursome, but rather ephemeral dish.

Previous carp dishes I’ve had have been quite earthy and musky, but the dense flesh here had a surprisingly clean taste. This would have been disappointing in another dish, but here it made it the perfect carrier for the butteriness of the sauce and there was nothing to overpower the crisp, sweet, tangy, vaguely artichoke-like flavour of the crosne vegetables or distract from the velvety texture of the mushrooms.

I'm sometimes accused of carping on and on and on…

After all that lightness, the savoury part of the tasting menu concluded with a pair of heavier, meatier dishes. The first was a dish of veal tails which was very satisfying thanks to their intense fattiness. They were also very meaty despite their thin dimensions. The tails were enhanced by the sweet, surprisingly yeasty taste of the fermented fennel accompaniment, while the chunky slices of white aubergine provided a nice contrast in flavour with their mix of sharpness and butteriness.

The tail that wags the dish.

The wild hare didn’t quite live up to my expectations, perhaps because I’m quite exacting when it comes to bunny meat. The meat was intensely gamey and while it was still fairly dense, it was just a little too tender when compared to the very best rabbit and hare dishes.

I wasn’t too disappointed though since the meatiness of the flesh was enhanced by the bold, tangy sauce which had been enriched with hare’s blood. The suitably hearty and firm Brussels sprouts were made interesting by a generous drizzling of hazelnut oil and lemon juice. The accompanying dumpling wasn’t quite like an English or Jamaican dumpling, with a slightly chewy texture somewhere in between that of a Chinese bao and a standard bread roll.

The first dessert of an embellished cherry sorbet was even more refreshing following the intense meatiness of that final savoury dish. The icy sorbet had a wonderfully sweet and sour taste, but there just wasn’t enough of it. This was a shame since without the sorbet, the rest of the dessert just wasn’t up to scratch. The jellied pomegranate and curdled-looking vanilla custard accompanying the sorbet were both rather muted. The tender, stewed chunks of apple were satisfactory, but seemed out of place and looked as if they’d been plucked from a bog-standard apple pie. 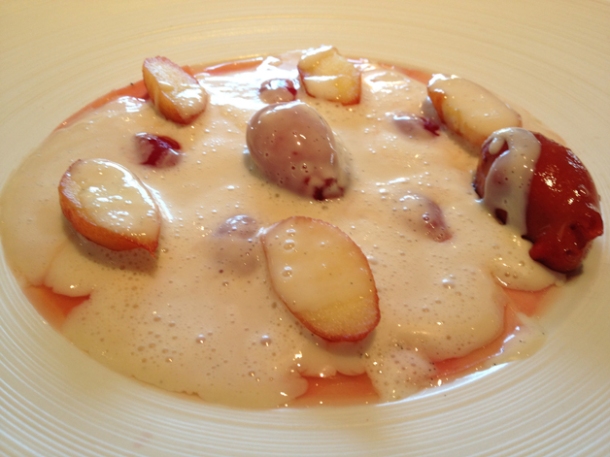 The second dessert suffered from a similar problem as the cherry sorbet. Resembling a trail of autumnal leaves, the curiously described ‘milk and honey with almonds, tea and mandarins’ had as its centrepiece a glop of distinctively flavoured Earl Grey sorbet which was very creamy but there wasn’t enough of it. The trail of almond-flavoured pastry crust was crunchy, nutty and zesty but also a little dry. Without more of the Earl Grey sorbet, it resembled a quixotic muesli.

A land of milk and honey?

In a reversal of roles, the petit fours turned out to be more interesting than the main desserts. Alongside the usual selection of macarons and chocolates were some delightfully sweet and nutty walnut, almond and hazelnut biscuits scooped out of a trolley full of ‘snow’ which was actually icing sugar. 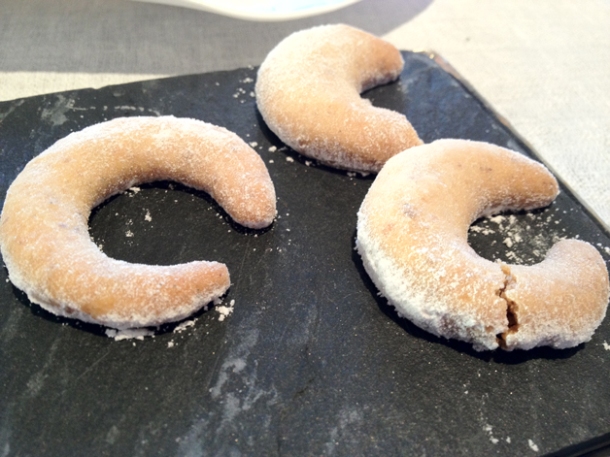 One overarching problem with the entirety of the tasting menu on my visit was the pacing. Some courses came out fairly rapidly, one after the other, while at other times there was a substantial lull between courses leaving me to twiddle my fingers admiring the leaves outside the window. Pacing tasting menus is an understandably tricky task of coordination between the kitchen and the front of the house and there were clearly some issues at Steirereck during my visit.

Inevitably Steirereck couldn’t quite live up to its vaunted reputation. Many of the savoury dishes were very good and they all playfully combined and contrasted different flavours and textures. The desserts felt unbalanced though, relying on just one key component to carry a whole dish. Even so, Steirereck was easily the best and most accomplished of the restaurants that I visited during my trip to Vienna, especially when one takes into consideration the impeccable service and the calming environment. But there’s still room for improvement, so Steirereck just misses out on a top five star rating.

Address: Am Heumarkt 2A inside the Stadtpark, A-1030, Vienna, Austria