This review of a Vienna restaurant is a break from The Picky Glutton’s usual London-based coverage.

Since I usually travel alone I often dine alone when overseas, but for my dinner at MediterraNeo in Vienna I had the pleasure of eating with Sue-Ellen and Uncle Monty. The horribly-named MediterraNeo is the resident restaurant at the InterContinental Hotel in Vienna and allegedly blends Mediterranean influences with traditional Austrian and German dishes.

Don’t expect any kitsch decor combining the styles of a Greek taverna with a German beer cellar though – the rectangular dining room has the bland, corporate-style decor you would expect from a restaurant in the branch of an international hotel chain with only a few potted plants to liven things up. The service was friendly and efficient, although on the quiet weekday night of our dinner, only one of the two available staff spoke English. 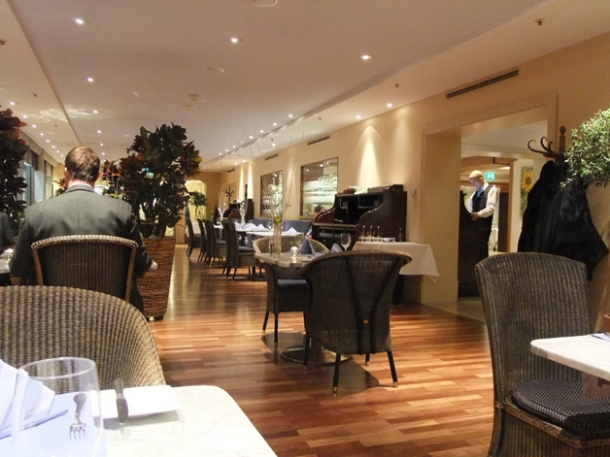 MediterraNeo - somewhere, someone is undeservedly slapping themselves on the back for their supposed linguistic legerdemain

I declined the prosecco aperitif since I’m teetotal, but wet lush Sue-Ellen had no such qualms and quaffed it all down. She wasn’t impressed with though – it had a sweet tang she wasn’t expecting and it wasn’t dry enough so it was more like cava than prosecco. Sue-Ellen was also repelled by the excessively bitter chardonnay, while Uncle Monty was unimpressed with the waiter’s suggestion of a local beer. The alcoholics’ verdict on the booze was unanimous – very poor.

The soakers were unimpressed.

The three amuse bouche were nothing if not interesting. The cucumber shot was sweet and distinctly flavoured with a slight chilli kick that was unusual, but nonetheless pleasing. The other two weren’t as successful – the guacamole was more like a tart egg salad but made with far too much egg and not nearly enough avocado. The dill butter for the accompany bread basket didn’t have quite enough dill in it to be memorable, but Sue Ellen seemed enamoured with it.

Uncle Monty’s starter of a beef consommé was more like a broth in its thickness and opacity, but he nonetheless seemed pleased with its bold meatiness and the hearty dumplings and sliced pancakes dunked in it. Sue Ellen also had a soupy starter in the form of the creamed pumpkin soup served with pumpkin seed bread, but she was underwhelmed by the muted flavour of both (sorry folks, no photo of this one).

More of a broth than a consommé.

My own starter of rabbit saddle was more unusual than I expected. The meat was accompanied by an odd lump of icy tangerine-flavoured cream on a stick. Although sweet, it didn’t really compliment the rest of the dish and its overall taste was reminscient of an odd Solero ice cream. The medallions of rabbit meat weren’t dense enough and had lost much of their gameiness so that they essentially resembled chicken in taste and texture. I initially mistook the accompanying mound of shredded carrot for pumpkin due to their excessive sweetness. My starter may have been interesting, but it was ultimately disappointing in every way. 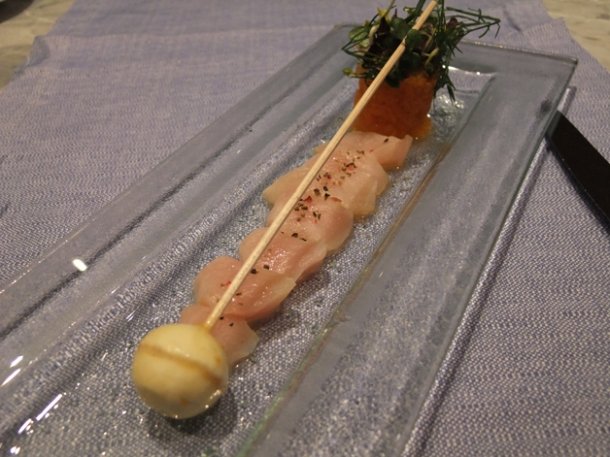 Rabbit and carrots - get it?

Uncle Monty was feeling uncharacteristically unhungry and decided to skip his main course and go straight to dessert. I ordered a second starter that piqued my interested – black pudding with pumpernickel. The black pudding was exactly what you’d expect – salty, fatty and a little smoky. The black pudding may not have been anything out of the ordinary, but the pumpernickel was not what I was expecting at all. Instead of the German rye bread I was expecting, there were a few slices of what looked like stewed root vegetable but tasted more like pineapple instead. Bizarre.

This black pudding isn't as black as the burning rage consuming my soul.

My main course of poached loach left me underwhelmed. The firm cod-like white fish was well-cooked, but lacking in character. The accompanying dumplings were too soft for my liking – they were too squidgy, almost as if they had been undercooked. The thin shavings of root vegetables almost resembled noodles and were the most likeable thing about the entire dish.

If shaved root vegetables are the most likeable thing about a dish, then something is very wrong.

Sue-Ellen was far more satisfied with her tafelspitz, a traditional Viennese dish of beef boiled in broth. Although she didn’t expect to like it, she was impressed with the bold meatiness of it all and the tender, melt-in-the-mouth texture of the meat. The only vegetables on her plate to attract any of her attention was the creamed spinach which was a little too firm for her liking. It was filling enough for her to skip dessert.

Sue-Ellen always did like a large helping of meat and two veg.

Uncle Monty was pleased with the coarse sweetness of his dessert of pumpkin cake, although he wasn’t sure what to make of the unusually tart curd cheese ice cream.

Given the number of coffee houses in the city serving up a dizzying assortment of cakes, Vienna is an ideal place to indulge one’s love of cakes. Sadly, MediterraNeo didn’t uphold this proud tradition on my visit. Although their chocolate cake had a delightfully velvety texture, it was too dry and tasted less like chocolate and more like almonds. Most of the chocolate flavour came instead from the bitter chocolate sauce, which isn’t a bad thing in of itself but it didn’t compliment the almondish cake very well.

The petit fours were a rather uninspired selection of chocolates and were nothing to write home about.

Despite its relatively reasonable prices, the hit and miss quality of the cooking at MediterraNeo means that it’s only worth dining here if you’re staying at the InterContinental itself and can’t muster the energy to venture into the wider city for a meal. Even then, judging by our experience, you’ll have a better experience sticking to the more traditional and meaty dishes.

Damning with faint praise – it’s an art and a science.

Total cost for one person shared between three people, including drinks and service charge: approx €45 ( approx £31 at the time of writing)