Should Busaba Eathai be worried?

Most Thai restaurants in London are far from expensive and well within reach of most budgets, but most are also quite chintzy and cheesy in their decor. Busaba Eathai is the obvious exception to this rule with its classy jasmine-scented surroundings, but there’s a new good-looking kid on the block in the form of Suda. Located in a small cluster of shops on a side street in Covent Garden and split across two floors, the decor is a mixture of the industrial and the rustic due to a combination of exposed ceiling ducts, wooden furniture and odd greenery and knick-knacks decorating the tables. The moody lighting and the clubby music are the final touches giving Suda a polished, if somewhat generic appearance. 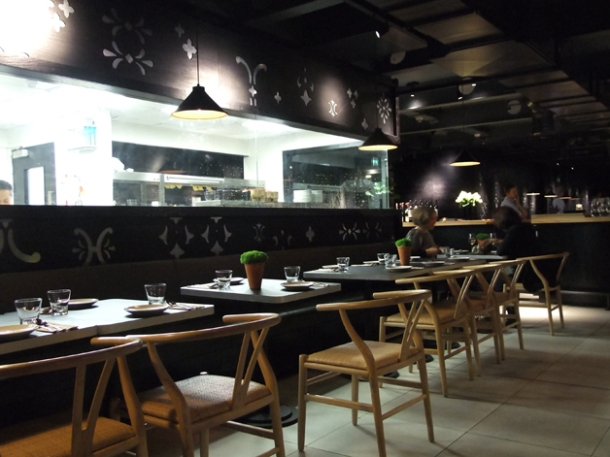 I'm not sure if I really want to look into the kitchen or not.

Suda may be reasonably priced, but that doesn’t mean service is second rate – it was consistently efficient and polite, if a little cold, during all three of my visits. This was no doubt helped by the fact that the two floors were sparsely populated on all three occasions.

Eeyore was embarrassed by the mess he'd just created in the bushes.

I had a lengthy opportunity to appreciate the attractive decor on my first visit as my dining companion that evening, The Bastard, was running late. I also had the opportunity to nurse a Thai iced tea which had a nutty taste to it and had a splash or two of condensed milk in it too. Refreshing, but a bit on the small side.

No Eeyore, this is my Thai iced tea!

When the Bastard finally arrived he started off with deep-fried calamari. I fail to see the hold that such a bland, oily, unattractive dish has on people who dine at Thai restaurants, especially when far more interesting dishes are available, but the Bastard wouldn’t be deterred from his tediously bourgeois pick.

Suda specialises in Thai salads and I tried out the classic spicy papaya version served here with cherry tomatoes and topped with roasted nuts. The firm slices of unripe papaya were zesty, which was well complimented by the suitably tart, spicy and occasionally sweet brine. The judiciously scattered nuts added a nice crunch, which was a good contrast in texture. A good start.

I couldn’t resist trying out Suda’s version of pad thai for my main course. I chose the option of rice noodles over glass noodles and was pleased by the lack of grease and their texture which was neither too soft nor too firm. Although the prawns were unremarkable, the noodles themselves were zesty and a had bold, stocky seafood taste to them. 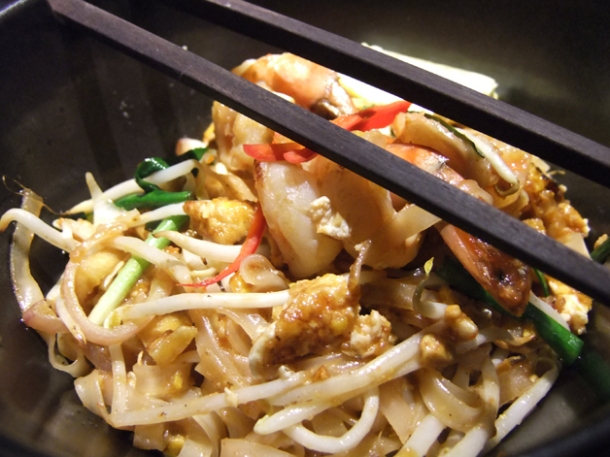 The Bastard opted for the lamb yellow curry. Neither of us were impressed by the heavily stewed meat or the very mild, heavily coconut-flavoured, one-dimensional curry sauce.

In a rare display of unanimity, we both had the mango with sticky rice for pudding. While the fresh mango was sharp and sweet, I had mixed feelings about the rest of the dessert. The clumps of rice were a little too hard and chewy for my liking, while the coconut milk drizzled on top wasn’t as rich as I was expecting.

I had mixed feelings about Suda following my first visit, so I decided to make an impromptu second visit a week later following an unsuccessful pub quiz in a nearby Covent Garden watering hole. Unusually, I wasn’t that hungry so I skipped having a starter and dived straight into a main course of ‘country style duck’ with salad and rice. The salad was just as good as it was on my first visit, but with fewer nuts and an added mintiness. Sadly, the rice was far too hard and chewy and while the duck did have a certain smokiness to it, the anonymous charred pieces of duck could almost have been any type of meat. Disappointing.

More than the son tum of its parts?

I finished off my second, abbreviated meal with a sticky rice roll filled with bitter chocolate. Although the soft, slightly chewy rice roll was thankfully not as hard as Suda’s more savoury rice dishes, the chocolate filling was disappointingly bland apart from a slight hint of bitterness. The accompanying coconut ice cream also had a very muted flavour.

My second visit to Suda was a bitter disappointment, but I paid an unexpected and unplanned third visit the next day with the assistance of Bleeding Gums Murphy. Annoyingly, he insisted on starting with the deep fried calamari which was just as pants as it was the first time around. I honestly don’t understand the appeal of the dish. 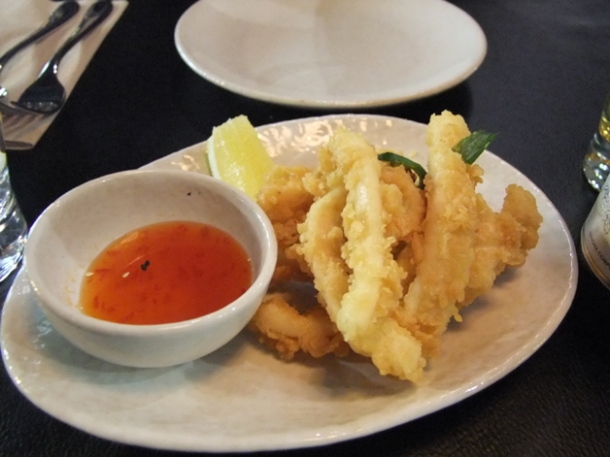 Whoever invented deep fried calamari must be laughing at all the idiots that order this dish.

For my own starter, I chose the eggplant and scallop salad. The scallops were a little bit too soft for my liking, but they were fresh. The creaminess of the aubergine chunks was a little muted and the spice of the chilli dressing was dampened by the presence of mint. Not bad overall, but it would’ve been more memorable with some firmer, less overcooked scallops and the use of the smaller baby aubergines more commonly used in Thai dishes.

Bleeding Gums Murphy continued his seafood theme with his main course of mixed seafood sautéed and served with a fried egg and rice. He enjoyed the mix of fresh prawns, squid and mussels in the zesty, mildly chilli brine, although he wasn’t sure what to make of the fried egg.

I joined in with the seafood binge, opting for the sizzling sea bass with kaffir lime leaf in red curry sauce. Although the fish arrived in a mild sauce that was more reddish brown in colour than actual red, it was tangy, peppery and had the unmistakable taste of kaffir leaves. The fish itself was hardly sizzling, but it was firm although it was a little too oily for my taste. Not too bad overall, but it was spoiled by the excessively hard, chewy rice.

Bleeding Gums Murphy had a hard time choosing a dessert, but ultimately opted for the tropical fruit sorbet which was refreshing, but the taste was generic enough to make identifying the fruit in question a group effort. 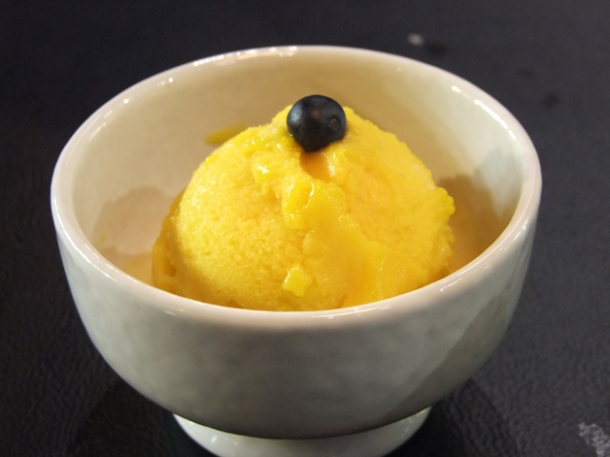 I chose the more interesting option of taro balls in coconut cream. The term ‘cream’ is a bit of a misnomer, as the thin liquid was more like milk. It still had a distinctive coconut taste that complimented the soft, chewy, slightly starchy balls of taro. A refreshing, interesting and light dessert.

There’s no doubt that Suda is an attractive restaurant with an affordable menu. The problem is that the menu seems to be full of dishes that are rather mediocre or just disappointing, with only the salads and a handful of others standing out from the crowd. Suda is worthy trying out if you’re in the area and in need of an inexpensive, filling feed, but at the moment it’s not consistently good enough for regular repeat visits.

Total cost for one person including soft drinks: £23 approx.