Once established, most restaurants either become well-entrentched or close down – they don’t tend to move. One exception to this rule of thumb is French restaurant Morgan M which has recently relocated from its long-time home in Islington to the even more well-heeled City. Despite this move, the decor at Morgan M isn’t the ostentatious display of wealth I was expecting, but was instead surprisingly plain and understated. Thankfully, the service is just as attentive as one would expect, although Baron Greenback and I did notice some significant delays in between our main course and our desserts. 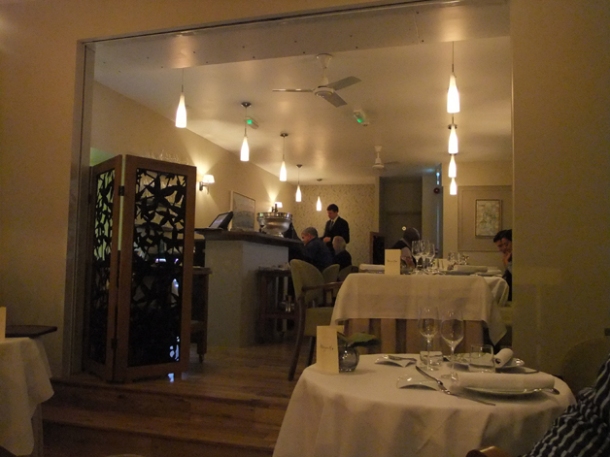 Hardly blinging, but at least it's not minging either.

Many high-priced meals start with an amuse bouche which is supposed to playfully tickle the taste buds and whet one’s appetite for the dishes to follow and the amuse bouche here did just that. Although the warm beetroot soup had a jelly-like appearance, it’s tangy flavour is unmistakably beetroot which was accentuated by the cold beetroot sorbet that also added a contrast in temperature. I could’ve done without the dollop of warm and rich, but rather thin cream though.

This soup is hard to beet.

If I had known that the amuse bouche was going to be a soup then I might have chosen a starter other than a butternut soup, but it’s still a good appetiser in its own right. The creamy, satisfying and distinctly flavoured soup was also a little salty but not disastrously so. Sat in the middle of the soup like a small island was mushroom tempura. The moistness of the soup meant the tempura batter wasn’t especially crisp or fluffy, but the presence of the mushroom did add an earthy richness to the soup which was pleasing. 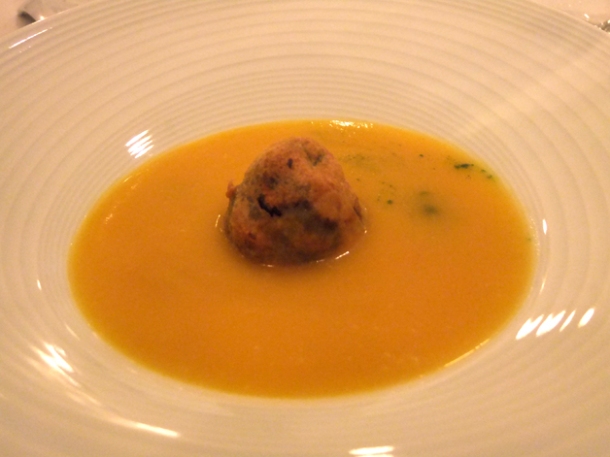 Sweet as a butternut?

Baron Greenback was also pleased with his game terrine. It was a little tricky identifying the various gamey meats that made up the dense terrine, so the Baron gave up and just enjoyed the fatty, meaty, salty goodness which was made all the more satisfying the presence of some creamy foie gras. The richness of the terrine was complimented well by the sweet, tangy tomato chutney which also had a surprisingly peppery aftertaste to it. 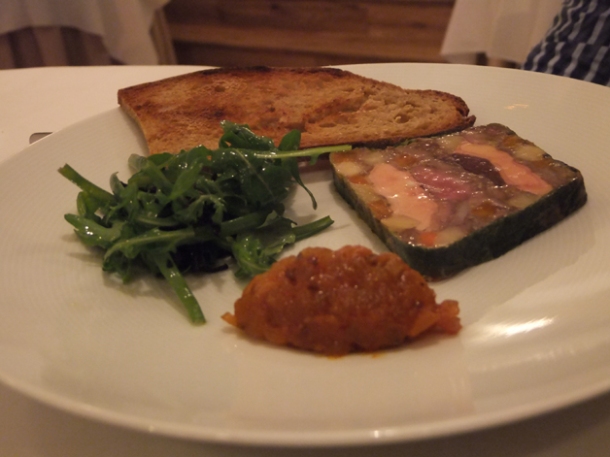 The meaty trend continued with our main courses. The Baron didn’t venture far from the gamey trend set by his terrine starter, opting for the venison cooked rare. He greatly enjoyed the juicy, nutty, slightly salty taste which was accentuated by the complex flavour of the Grand Veneur sauce and complimented well by the sweet potato puree. 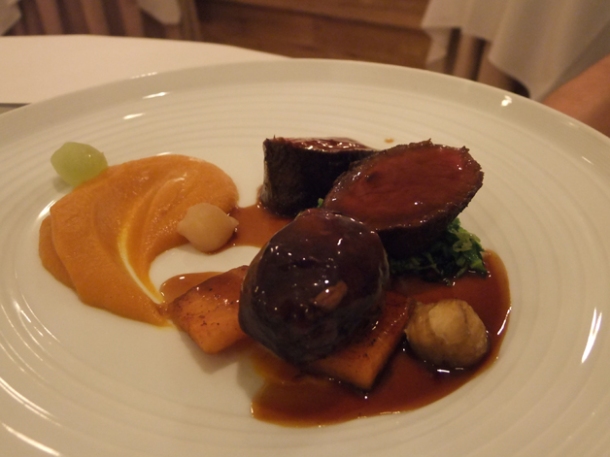 Bambi was shocked to learn what had become of his mother.

Since we were dining in the middle of partridge season, I had to see what Morgan M would do with the wild bird. I wasn’t disappointed – the dense, oven-roasted meat had a slightly sweet taste to it which was enhanced by the peeled grapes and creamy bread sauce. 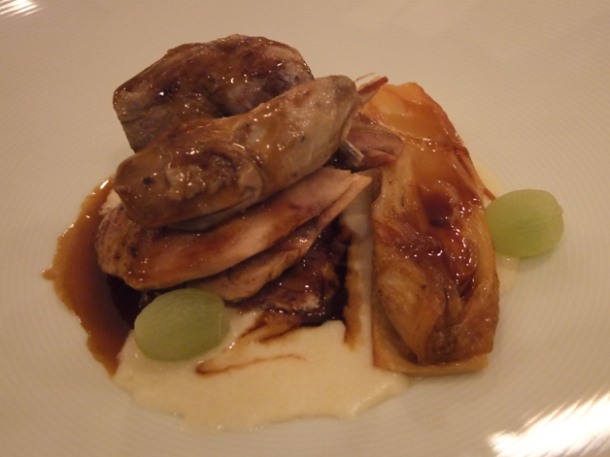 Why is it not in a pear tree?

Naturally, one cannot have dessert without first having the pre-dessert which in this instance was rice pudding served in a crispy biscuit shell with raspberry sorbet. While the sorbet is tangy, sharp and very fruity, I was less convinced by the rather thin, limp rice pudding encased in a biscuit shell which was just a little bit too hard.

Oh well, you can't win them all.

Baron Greenback had better luck with his pineapple soufflé served with pina colada sorbet which successfully combined fluffiness with the unmistakable sweet and sharp flavour of pineapple. 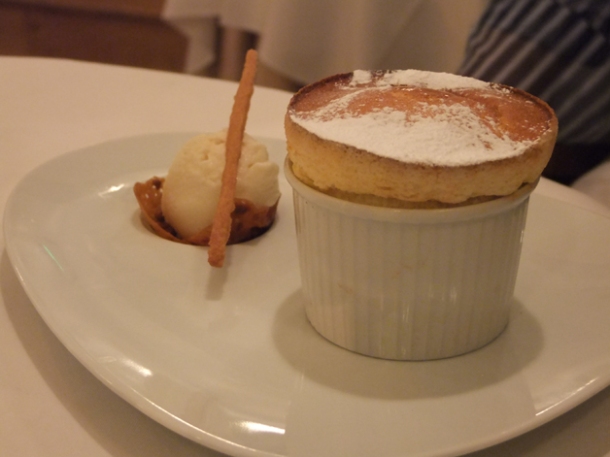 A dessert worth pining after...

I wasn’t quite as enthused about my own dessert. The dark chocolate moeleux, a small chocolate cake with a liquid chocolate center, was intensely dark and bittersweet. The milk sorbet it was served with was surprisingly creamy and thick despite its rather tame creamy flavour, but the sorbet and moeleux didn’t really complement each other as well as they should have. The slightly boozy armagnac sauce was a triumph though, providing a sharp contrast in flavour to both the dessert and moeleux when drizzled over both of them. 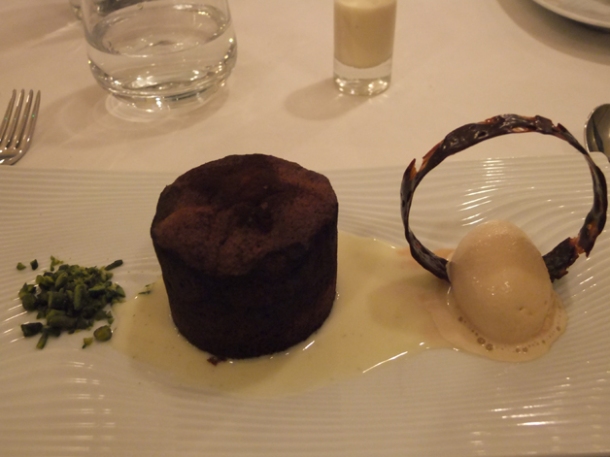 The food at Morgan M is unquestionably refined, accomplished and satisfying and if you’re in the mood for a pricey supper in the City, then it’s a great choice. It’s not quite as skilled and inventive as the complex, playful cuisine at Gauthier in Soho, but it’s a close second.

Total cost for one person including drinks: £62 approx.