Yet another tapas place in Fitzrovia – but is it any good?

There’s no shortage of tapas restaurants and bars around Goodge Street in Fitzrovia – some of my favourites include The Salt Yard (sister restaurant of The Opera Tavern) and Fino. For some reason Sue-Ellen inexplicably favours Navarro’s – inexplicable given that restaurant’s consistently uninspired and merely average quality food.

Mondeo Man has a shocking taste in burgers (The Eagle Bar Diner? Really?), but I do respect his opinion on Spanish food since he spends more time in Spain than some Spaniards. I was therefore keen to try out Barrica, a new tapas bar on Goodge Street, following his glowing recommendation. I therefore made an impromptu Friday evening visit with Sue-Ellen, Wicket, LeChuck and The Praetor in tow. The place was packed to the rafters, but luckily we managed to snag a table that opened up at the last minute.

Barrica is quite small with space for only a few dozen covers at most. The long, narrow room is filled mostly with narrow tables and bar stool-style seating which we all found to be quite uncomfortable. The space itself is attractive enough with dim, moody lighting and the obligatory pig legs hanging from the ceiling. Service was a mixed bag – one member of staff was knowledgeable and chatty, while another took a small ice age to bring us our bill and then take payment.

Although the menu occupies a single side of A4 paper, with another sheet listing the specials, it’s actually quite dense with a lot of dishes to choose from. It’s also slightly more complicated than it looks since some dishes are only available at certain times of day.

The middle classes of London getting slowly sozzled on a Friday night.

While we waited for our chosen smorgasbord of dishes to arrive, we snacked on bread with olive oil. While the bread was suitably fluffy and light, the olive oil was surprisingly watery although it did have an intriguingly sweet, grape-like flavour to it. Since we had all been to the pub beforehand for cheap drinks, the drinkers among us didn’t feel the need to indulge in the extensive wine and spirit list. Wicket and LeChuck settled on Moritz beer, which they both seemed to enjoy, while Sue-Ellen continued her quest to drain the world’s supply of dry white wines. The Praetor settled on mango juice, which was almost certainly from a carton rather than freshly made, while I stuck with tap water as I usually do.

The chunks of Tortilla de Patata, or Spanish omelette to you and me, were firm and dense thanks to the liberal use of potato. It was almost too dense for some palates, lacking much flavour and texture beyond the starchy thickness of the potato but at least it wasn’t too greasy.

Sorry for some of the blurry, out-of-focus photos folks.

Sue-Ellen seemed displeased with her selection of Chorizo Extra Bellota almost entirely because it was thinly sliced, rather than coarsely and thickly cut, and wouldn’t stop muttering ‘Navarro’s’ under her breath in a passive-aggressive manner. Wicket seemed to enjoy it quite a lot though and thought it was pleasingly spicy and smoky. I agreed more with Wicket than Sue Ellen. There was certainly nothing wrong with it – it wasn’t too peppery, too hot, too salty, too fatty or too oily. I did think its flavour was muted at best though and was lacking in character, perhaps because it was lacking all of those things.

I’m a big fan of Spanish cured hams so I was looking forward to the Jamon Iberico Cebo, made from acorn and grain-fed pigs according to the menu, but it arrived in a rather unexpected form. Rather than thin, waxy-looking slice of meat, it had the appearance of thick, coarse, dense chunks of meat. I suspect we’d been brought the wrong dish, but whatever it was this meaty chunk of pork was quite pleasing. The texture was fatty, moist and dense while it had slightly sweet and smoky flavours that mingled well together.

I’m not quite sure what this is, but I’m fairly certain it’s not a jamon.

The Patatas Bravas y Alioli are basically fried potatoes with garlic mayonnaise and a slightly spicy tomato sauce. The mayonnaise wasn’t garlicky enough for garlic fiend LeChuck, while I enjoyed the gently spiced tomato sauce more. The potatoes were very crisp on the outside, but the texture on the inside was quite bitty as if the potato chunks were actually processed and reconstituted into potato form. Disappointing.

Crispy on the outside, not so great on the inside.

Much more successful were the Albondigas de Cerdo y Rabo de Toro or oxtail and pork meatballs. These were remarkably tasty with a dense texture that somehow managed to be both coarse and smooth at the same time, with a bold, hearty, stocky, very meaty flavour. Both LeChuck and I enjoyed them immensely. 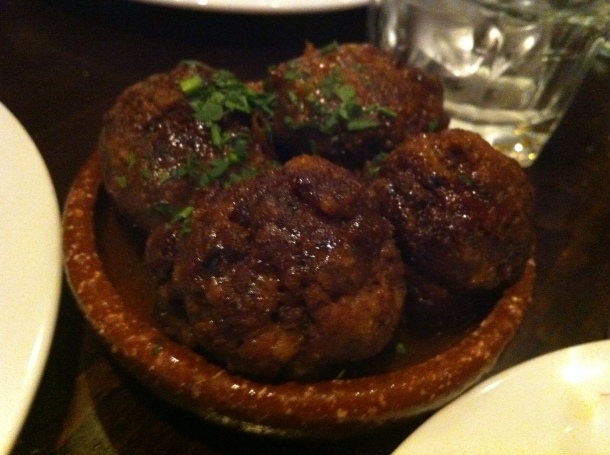 I could make a crass joke about meatballs here, but I won’t.

The spinach with brown garlic and olive oil was slightly tart and had a surprising touch of creaminess to it. Not a bad way to get one of your five-a-day, but hardly the most remarkable spinach dish I’ve ever had.

Not much to see here. Move along.

The whole grilled squid was fresh with a soft, yielding texture to it and a slightly creamy, garlicky flavour. Wicket was unimpressed and while it won’t set the world of seafood alight, I enjoyed it, if only because it provided a refreshing interlude between the heavier, meatier dishes we had ordered. 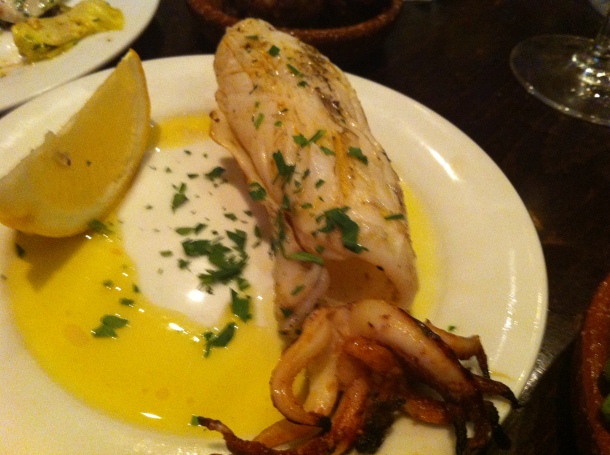 The only good squid is a dead squid.

LeChuck has recently taken up vegetarianism in an existential bid to redefine his personality through his diet – after all, we are what we eat. Although he does lapse out of his vegetarianism on a regular basis, LeChuck does seem to have a good eye for interesting vegetable dishes. His pick of a dish consisting of bitter yet refreshing chicory leaves combined with walnut chunks and the occasional soft hit of blue cheese was a delightful mix of flavours. 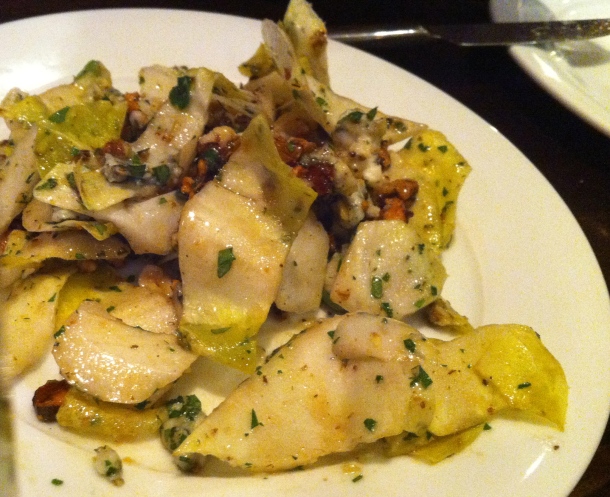 I was quite pleased with the braised veal cheeks. The tender chunks of meat had a soft, fibrous texture and a slightly smoky flavour. It’s not the best example of braised bovine facial meat I’ve had, but it’s still a satisfying dish. 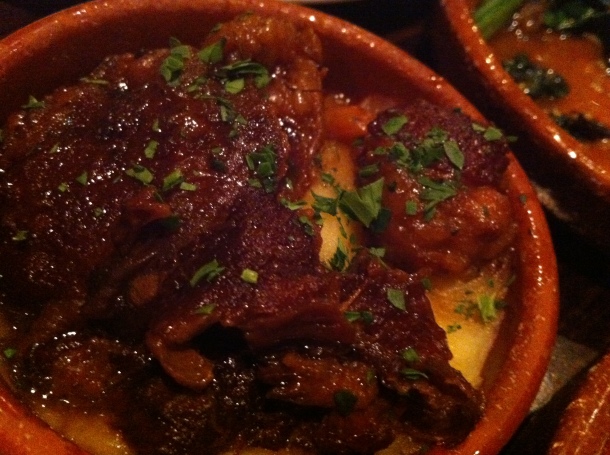 If you’ve ever had tapas before then you’ll know exactly what to expect from the deep fried padron peppers – tender, slightly crispy, slightly sweet peppers that you could snack on endlessly. The Praetor’s prawn dish was a forgettable, unremarkable oily mess though.

LeChuck really needs to stop eating stuff before I can photograph it. Like here… 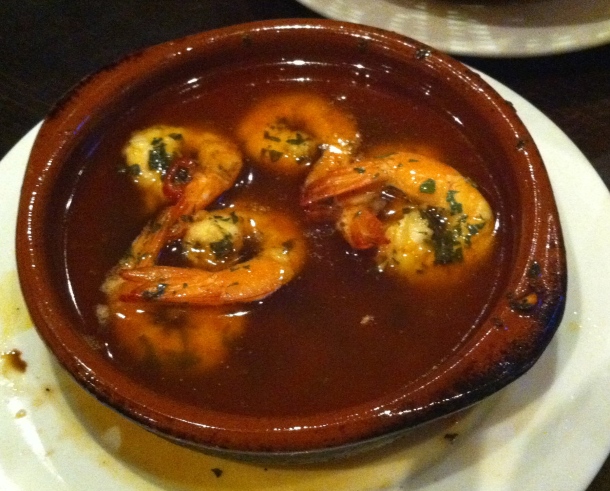 The last of our savoury dishes, but by no means the least, were the gooseneck barnacles. Despite the name they have little to do with geese, but are actually crustaceans. According to a chatty and informative staff member I flagged down, they are prized in Galician cuisine and are hard to find in Britain. Due to their unusual appearance, Sue-Ellen, Wicket and The Praetor formed their own chapter of the Petit Bourgeois Boring Club, refusing to try any, leaving LeChuck and I to dig in.

Apparently the trick is to find a pressure point and snap it, exposing the flesh underneath. The end result was rather disappointing though. Apart from a brief hit of saltiness, the firm quivering flesh didn’t really taste of much. The firm texture and elongated shape were reminiscent of razor clams, but without the distinctive taste of that seafood.

Sue-Ellen was full, but still had room for another glass of wine. The Praetor and I still had plenty of appetite for dessert though. The Praetor opted for an almond tart with cream and apple puree. The almond flavour initially seemed quite subdued, but upon further tastings, it was actually quite complex and layered with differing intensities of almond-ness the deeper you dove into the tart. Not bad. 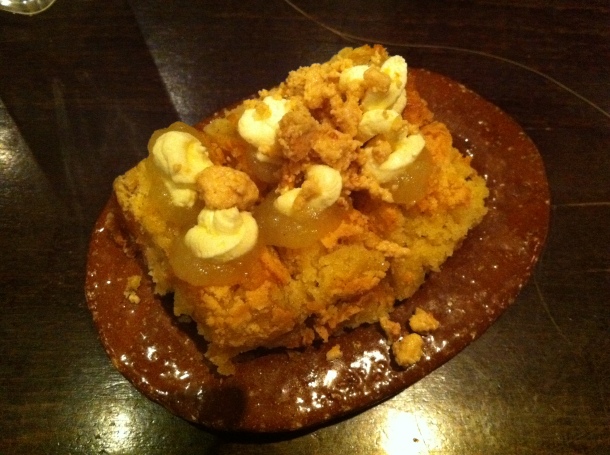 I’m quite fond of almond-based desserts myself.

Wicket enjoyed his dark chocolate tart, although the pastry was crumblier and softer than I expected. The chocolate was also not as deep and rich as I had anticipated, having a lighter, creamier, fluffier taste to it. It wasn’t to my taste, but Wicket polished it off in short order nonetheless.

Wicket always goes for the chocolate.

LeChuck’s dessert of sea salt caramel chocolate and and olive oil ice cream arrived in the unusual form of a choc ice on a stick. Despite the unusual appearance, I thought this highly anticipated dessert was otherwise a disappointment. Both the chocolate shell and the ice cream inside were surprisingly bland – especially as I was expecting something similar to the knock-out combination of chewiness and saltiness that I found in the salt caramels at Nunu Chocolates in New York. LeChuck seemed much more impressed though. 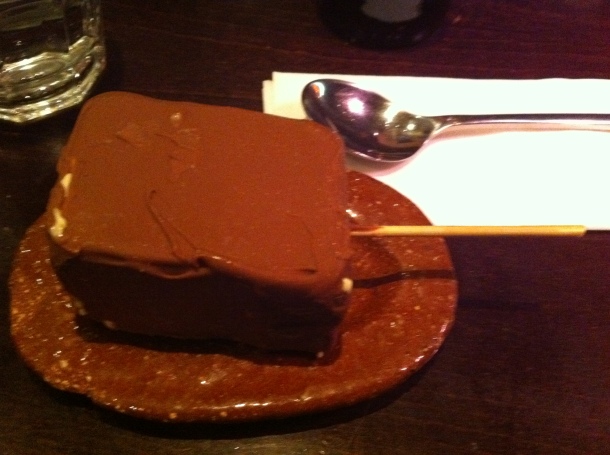 LeChuck was so excited by his dessert, he couldn’t hold the camera still.

LeChuck didn’t think much of my dessert, a slightly boozy ice cream paired with caramelised walnuts. I, on the otherhand, was very taken with it and enjoyed it immensely. The slightly tart, slippery ice cream proved to be the perfect accompaniment to the crunchy, slightly sweet and tangy walnuts that were almost addictively moreish (sorry folks, the photo for this one has gone missing somehow).

Barrica proved to be quite divisive among my dining companions, with a few liking it and others disliking it. I was in two minds about the place myself. Some dishes were delightfully accomplished while others were merely OK or didn’t leave much of an impression at all. Barrica isn’t as consistently good as The Salt Yard or The Opera Tavern, but when it gets it right, the results are truly impressive. The problem is that many will have trouble finding those exceptional dishes among all the detritus in the lengthy menu. It is cheaper than either The Salt Yard or The Opera Tavern but with smaller portions as a result. The service is also in need of a good kick in the pants.

Barrica just misses out on a four star rating, getting three stars, so I suspect I may try it out again.

Total cost for one person including alcohol: approx. £25