No, not that Georgia – the other one

At the time of writing, the entirety of London’s restaurant industry – and indeed the UK’s – has entered a period of intense uncertainty. The Covid-19 coronavirus crisis has forced the shutdown of literally every sit-down restaurant in the capital (along with a whole host of other venues from cafes and pubs to theatres and museums). Despite the promise of government subsidies for out-of-work employees, as well as entrepreneurial restauranteurs pivoting to new business models as stop-gap measures, there’s no guarantee that all of the restaurants we know and love will reopen once the pandemic subsides.

But this review – and yes writing a restaurant review in the midst of a pandemic feels bizarre – isn’t a funeral dirge, but a celebration of what makes eating out in London so rewarding and thus why it’s worth fighting for. Restaurants aren’t just a vital part of the economy, but intrinsically rewarding and nourishing in more ways than one.

The Georgian doesn’t serve food from the American South, but from the country bordering the Black Sea – an uncommon culinary occurrence in London. While it serves some Georgian dishes at breakfast and lunch, alongside the usual cafe staples, its fullest spread is available at dinner. Despite the comparative rarity of Georgian food in London, its location outside of zone 1 and its quotidien menu descriptions make this restaurant easy to overlook.

The Georgian doesn’t serve alcohol, but you can bring your own booze for a corkage fee of just £5 a head.

To dismiss The Georgian out of hand, though, would be a mistake.

Corn bread was less like its Deep South counterpart and more like a Colombian/Venezuelan-style arepas – moreish on the outside with a somewhat papery sheaf-like consistency on the inside. Each roll is best taken slathered with one of the vegetable-based pates, all of which are served at room temperature. A mix of beetroot and walnuts was far more mellow than expected, balancing earthiness and moreishness rather than whacking me in the face with a vulgar level of vegetal vavavoom. The pate of aubergine and walnuts was unsurprisingly reminiscent of baba ghanoush with its smooth creamy fleshy consistency and a touch of smoke.

I’ve been accused of indulgently corny captions and I regret nothing.

The pide-lookalike khachapuri flatbread is available in a couple of variants, with the megruli version topped and stuffed with egg, butter and cheese. The khachapuri acharuli stretches the definition of a flatbread with its thick, voluminous presence. Crunchy then soft, it was less like a pide and more akin to a toasted focaccia-pitta hybrid but hardly worse off for it. Although it oozed decadently and lasciviously, the topping a trois proved to be surprisingly tame with little of the salty, creamy richness I was expecting. The broadly comparable Black Sea pide – formerly served by the Oklava concession at Arcade Food Theatre before they left to take over the premises formerly occupied by Kyseri – was far more satisfying.

Still, there was joy to be had in dredging torn-off pieces of the khachapuri through the kharcho soup, a dish that had plenty of its own charms. The unctuously moreish broth came flecked with rice and sinewy fleshy morsels of beef akin to ox tail, while also tinged with mildly spicy hints. It was not only unexpectedly nuanced, but utterly addictive too.

Although the pomegranate added little beyond a touch of colour to the chaqapuli, the rest of this lamb stew was a classy delight from the first mouthful to the bowl-scraping finale. Tender, sinewy hunks of modestly earthy meat were aptly complimented by a broth that was both moreish and zingy.

Any mistakes in the spelling and identification of Georgian food names are mine alone.

A stew of chicken and potatoes sounds utterly mundane, but that couldn’t be further from the truth. The chicken was almost gamey in its earthiness, the wrinkled skin supple and nut brown, while the deceptively thin broth was moreishly herby. With tenderised baby potatoes providing ballast, this remarkably flavoursome dish is a testament to what happens when quality ingredients are put in the hands of a skilled chef.

Why did the chicken dish cross the road? To put almost all other chicken dishes in this country to shame.

Happy Buddha and Veal Smasher were especially fond of the khinkali dumplings and for good reason. They didn’t resemble Turkish manti, as some of us had expected, but were instead much more like Nepalese/Tibetan momos or thicker-skinned boiled/steamed Chinese jiaozi. The stout, doughy skins cradled juicy gobbets of beef and pork, each meaty hunk flecked with pepper. Tugging the skins away with my teeth to unload such succulent meaty heft into my mouth was an undeniable pleasure. 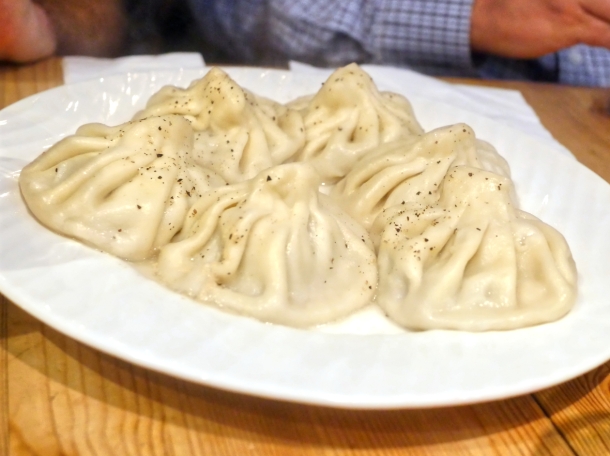 Although the piquant sour sweetness of the chilli plum sauce only really suited the dumplings, I would nevertheless love to have a jar of this stuff to hand for my own uses.

Bean stew with added pork was less like a cassoulet or feijoada and more its own thing with a passing resemblance to American-style pork-and-beans. The moreishly hearty beans were almost daal-like in their zesty earthiness, while chopped pork and frankfurter-style sausage slices added a gentle smokiness to the thin yet sticky sauce. The only blight was the stale slice of rye bread served on the side.

The Georgian’s dual role as a cafe only ever became evident during dessert. Slices of both the carrot cake and pistachio cake were far too dry to be enjoyable, with both leaning heavily on their frostings for charm. The plum cake, on the other hand, was a winsome treat. Tangy sweet fruit dotted the light, moist and fluffy grained expanse, heightening the cake’s passing resemblance to a French-style flaugnarde or clafoutis. The desserts need more work, but there’s potential here if the plum cake is any indication.

This slice of cake was less carrot and more stick. 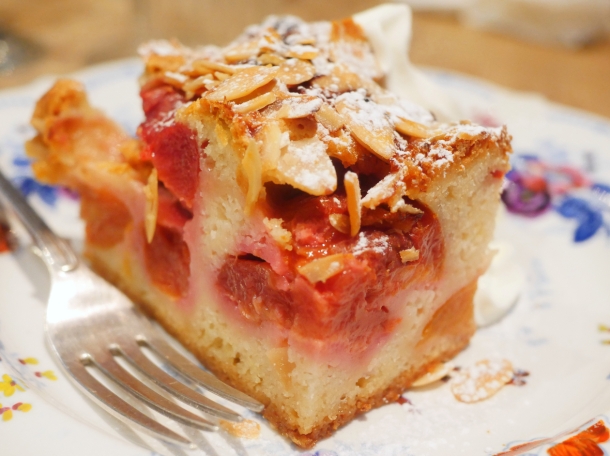 The cuisines of many cultures formerly behind the Iron Curtain tend to be stigmatised as stodgy, crude and overly dependent on meat. If The Georgian is anything to go by, Georgian food clearly rejects and rises above those stereotypes (or at least the first two). Its dishes ranged from the bold and sassy to the light and sophisticatedly nuanced; almost all were gutturally satisfying. Only the limited desserts were a let-down, but even here there were glimmers of talent simmering beneath the surface.

Even before fear of the novel coronavirus – and then the governmental response to its very real threat – paralysed London’s restaurants, The Georgian had a hard time filling its tables. On their reconnaissance visits, Templeton Peck and Vicious Alabaster reported that their table was often the only one occupied the whole evening.

Fortunately for those of us new to Georgian food, as well as those yet to discover its joys, The Georgian already has a selection of its dishes available for order on Deliveroo. For those of you lucky enough to live within its Clapham-Balham-Wandworth-ish delivery area, this is an opportunity that must be seized while you spend time social distancing at home. While chain restaurants have their place, our eating out culture would be a poorer, gaunter and shallower affair if it didn’t also consist of independents like The Georgian.

In a time when our horizons and aspirations have been forcibly constrained to our local streets and boroughs, food from The Georgian is a reminder of the rich vitality that once was only available far beyond our borders. But it was there for any Londoner to savour, surrounded by the laughter of friends, for the price of £35-ish a head and the tap of an Oyster card. With a lot of anti-viral luck and the tap of some smartphones in the meantime, it could be ours once again. It must, for the alternative doesn’t bear thinking about.

Average cost for one person, including BYOB corkage fees, when shared between six: £31-35 approx.