The Barbican Centre may be a supreme example of Brutalist architecture and a fine place to take in a film or exhibition, but it’s been a barren wasteland for food with branches of Benugo, Cote and other such dens of last resort as your only in-house dining choices up until now. That’s all changed with the arrival of Osteria, an Italian restaurant sequestered away on the second floor in place of what used to be the Gin Joint. Normally, a restaurant from the people behind such superb eateries as Wild Honey and Arbutus would make me giddy with anticipation, but the additional involvement of Searcys – the people behind many overpriced tourist trap catering operations – filled me with fear.

City in the sky.

If nothing else, Osteria is cosily appointed with Tube-style upholstery patterns on the seats while the low-ceilings and dim spot lighting help provide a romantic mood. Plus, there’s the view of St Giles Cripplegate and the lake terrace which looks dreamily mysterious at night. The service from the converse-wearing staff can be slow and error-prone though unless the besuited maitre d’ is present to oversee things. Even then, there’s still significant room for improvement. When an elderly pair of diners, one of whom is literally holding on to a zimmer frame for dear life, ask for help in getting to street level to reach their taxi, a response of ‘we’re just the catering, not facilities’ may be prosaically correct but isn’t at all within the spirit of British hospitality.

Sadly, fugly tomatoes like those aren’t a common sight in the UK. 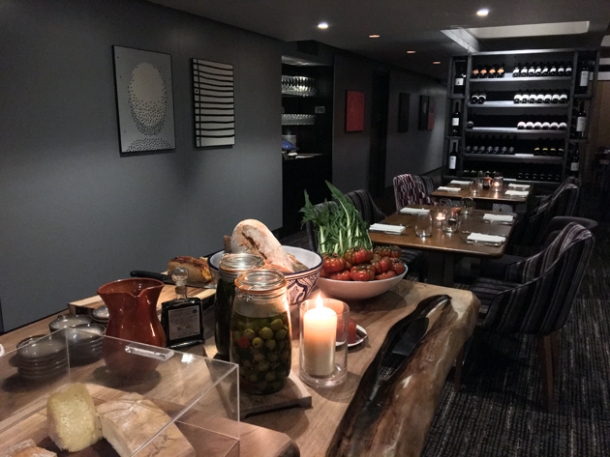 ‘We’ve got more covers than we can actually fill. What shall we put in this space instead?’
‘How about a decorative produce table?’
‘Genius, Jenkins!’ 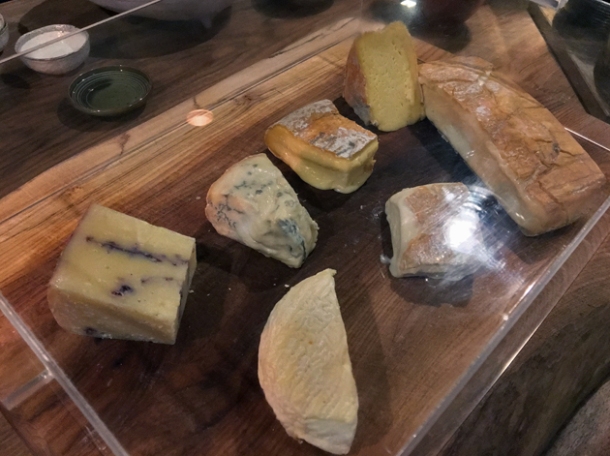 Okay, so it’s not completely decorative.

Osteria is one of most unimaginative names possible for an Italian restaurant and, in this case, possibly misleading and inappropriate as it’s traditionally been the term for inexpensive inns and pub-like eateries. This gussying up of the rustic is most evident in a pair of dishes starting with the porchetta. At its best this roast pork dish can be a viscerally joyful pork experience, but here it’s been refined to the point where it bears only a slight resemblance to its namesake. Very thin, almost carpaccio-slices of pork didn’t come with any crackling. They were moderately fatty, porky and herby but the effect was a little too tame which undermines the need for the palate cleansing abilities of the mildly tart, sweet apple slices and the bitter leaves. It’s decent on its own terms, but it’s not the porchetta I’m looking for.

One day I’ll find superlative porchetta in London. Today is not that day.

The second example of needless gloss is the tripe. Although tender and yielding, the tripe was lacking in offally funk while the sticky sauce was only moderately meaty and umami. Plus, the portion size was miserly given that it was supposed to be a main and that tripe is cheap.

The pasta dishes can be ordered as mains or as a smaller Primo portion slotting in between the starters and mains. Unfortunately, the tagliatelle was just the wrong side of al dente although it wasn’t too mushy at least. The sauce was at least umami and gently spiced, but the promised nduja was in short supply and the minced veal is easily forgotten. 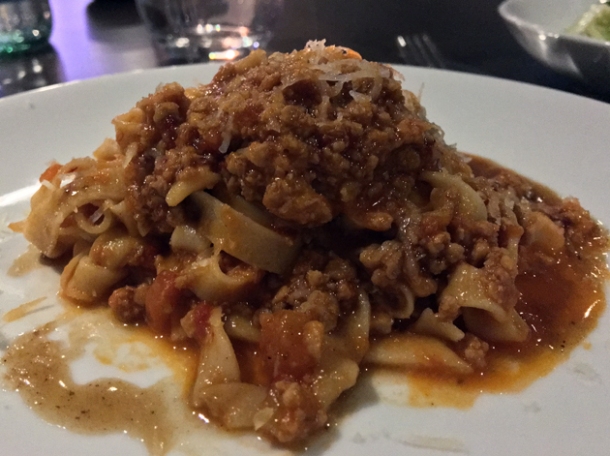 I don’t want to get too hung up on the ‘Osteria’ name. What’s more important is when dishes misfire, such as this uneven plateful here.

Tender and mildly bitter stems of puntarelle were pleasing, but the promised anchovies were missing in action.

Given the, at best, highly variable nature of the savoury courses, I was taken aback by the accomplished sophistication of the honey and olive oil gelato. Light, milky and elastic, the texture and consistency of the gelato is easily good enough to rival the best that Rome has to offer. The grassy fruitiness of the gelato combined neatly with the aniseedy sticky crunch of the honeycomb to form a beguiling herby sweetness of uncommon depth. This dessert would stick out like a sore thumb at many traditional osteria, but who cares when it’s this good. 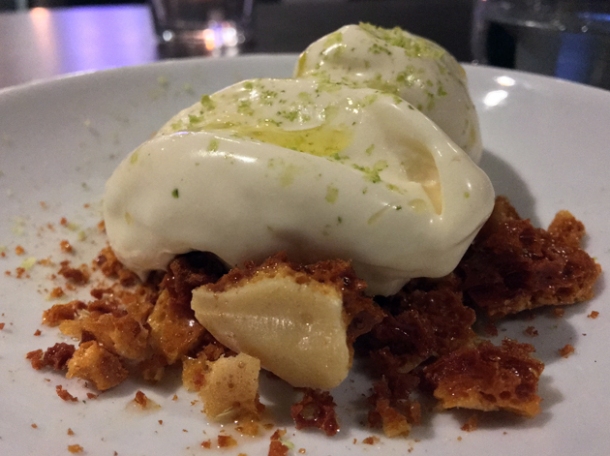 This reminds of the signature honeycomb desserts at Wild Honey.

Milky burrata with a soft curd-like interior was served at room temperature. I still prefer my burrata with a cool liquid interior, but this burrata was still eminently scoffable – especially when taken with the distinctively nutty hazelnuts and firm carrots. Sadly, the artichokes left me unmoved.

This review’s procrastination was brought to you, in part, by Mr Robot.

Tender ravioli came filled with lightly bitter and chewy veg which meshed well with the shavings of woody parmesan scattered up top.

Given the very wobbly nature of my first meal at Osteria, I was surprised at how well the savoury courses were going this time around. This reached its nadir in the monkfish. Expertly cooked with a lightly buttery and chewy crust that gave way to a firm bounciness that ended with a tender centre and follow through. This incredibly well-textured fish contrasted neatly with the firm white beans and bitter, wrinkly spinach.

Inevitably, a side dish of sliced tomatoes just couldn’t compare to such aquatic goodness. Slightly umami and sharp segments were dressed in a somewhat sharp and woody balsamic vinegar. 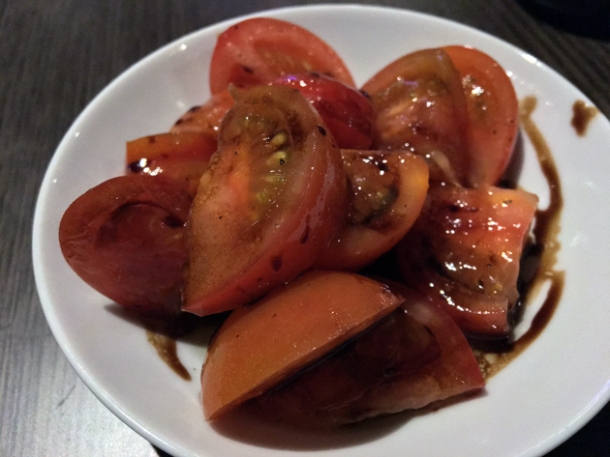 Although lacking in the promised blood orange flavour, the semifreddo was dense, slightly chewy and refreshingly cool. This chewiness was emphasised by crisp and chewy bits of meringue, while distinctly sugary sweet clementines added another layer of flavour.

There are four lights.

The semifreddo was a bit on the small side, prompting an order of cheese. Semi-soft cow’s milk cheese Robiola was milky, dense, sharp and lightly tart. I’m no fan of Gorgonzola (it just can’t compete with Roquefort or Stilton for my blue cheese affections), but the taleggio was dependably good with its dense elasticity and fruitiness. A dense yet airy goat’s milk cheese was surprisingly mild with little of the earthy funk that I usually associate with goaty cheeses.

It’s an odd restaurant where the sea bream carpaccio is almost thicker than the porchetta, but this did at least mean this carpaccio was meaty as well as refreshing. The clementines only added a passing sweetness, but this was no real loss as it allowed the bitter fennel and the chillies, with their lingering spicy heat, to take centre stage. Good stuff. 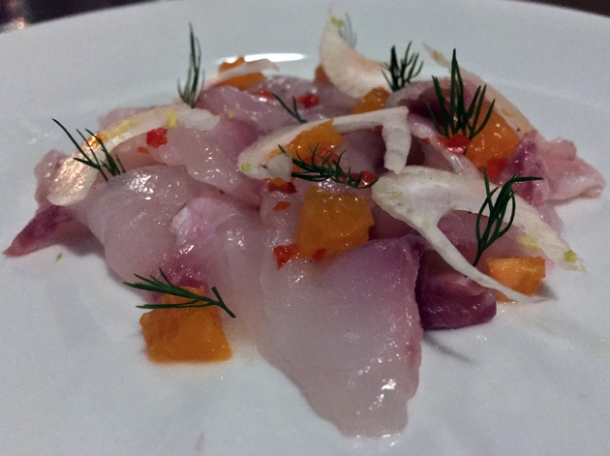 Creamy, grainy polenta with a nutty undertone was well matched by taut mushrooms that ranged from umami to earthy. The meaty jus added another layer of flavour as did the samphire-like crisp greens that added their own earthiness. Superb.

Not mushroom for improvement – it’s damn near perfect as it is.

If the rabbit leg special is available, then jump on it before it hops away. Firm and moist rabbit leg segments were stuffed with chunky and coarse sausage segments. This neat meaty pairing was made even better by the sticky chorizo-infused tomato sauced fregola. Like the gelato and honeycomb dessert, this rabbit dish is another echo of the excellent rabbit/hare dishes often available at Wild Honey and a corker in its own right. 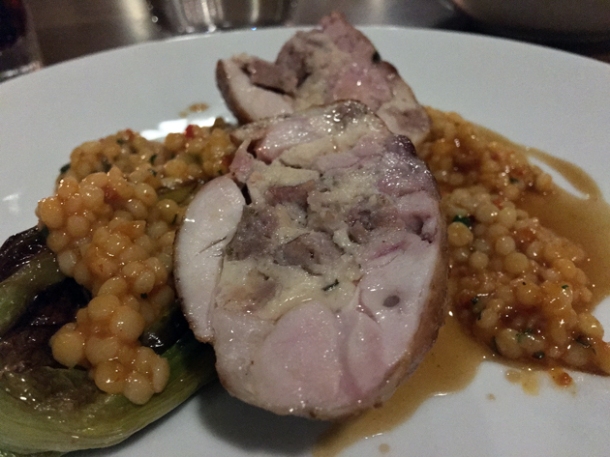 Fresh and lightly salted purple sprouting broccoli was a little too soft, but still a fine accompaniment to the stuffed rabbit leg.

Although billed as a pear and almond tart, this dessert tasted more lemony with little almond effect evident. Plus, while there was a discernible crust, it was so thin that this dessert bore more of a resemblance to a cake. Far more memorable was the accompanying ice cream which was not only smooth and light, but also actually tasted of almonds. It meshed well with the nutty bittersweet chocolate cream and chocolate pieces. Divorce the ice cream and chocolate from the so-so tart and you could have a far better dessert as a result.

Osteria’s grilled octopus was firm with a gentle but nonetheless evocatively sea salt quality to it. The sweetness of the bell pepper sauce was balanced out by the punch of parsley and capers as well as by the chewy fried potato pieces. A lip smacking start.

Although apparently similar to gnocchi, the slightly chewy and supple skins of the gnudi reminded me more of mochi. The milky ricotta filling had surprising floral notes and an almond-like follow. Meanwhile, sweet super-thin slices of pear were counterbalanced by lightly bitter chicory leaves. Everything melded together beautifully with surprising layered depths of flavour.

How do you even pronounce ‘gnudi’?

Although cooked medium, the mackerel was nonetheless delicate and full of that fish’s distinctive and bold flavour. The fennel was a little muted, but the blobs and bits of lemon ranged from sweet to sharp to acidic and tangy. This gave this already accomplished fish dish a distinctively light and summery feel.

A side of spiced fregola wasn’t as accomplished as the fregola that accompanied the rabbit leg special from my previous meal. The soft morsels, while still pleasing enough in their own right, were dressed in a generic tomato sauce that was hardly spiced at all. 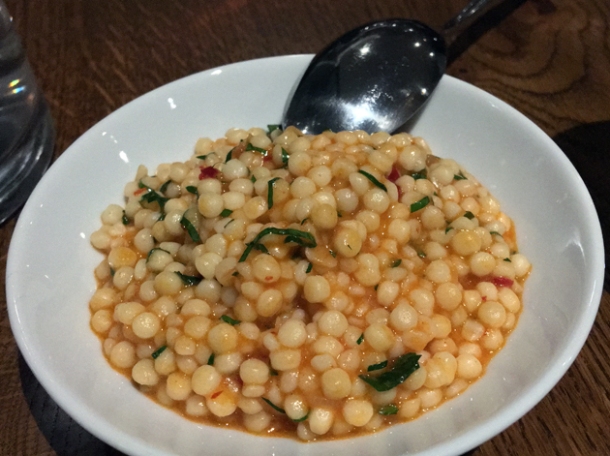 The vanilla panna cotta was much more than the sum of its parts. The milky, silky yet also slightly lumpy tofu-esque panna cotta actually tasted of vanilla. The tart and quiveringly squidgy rhubarb and nutty cocoa nibs meshed with the panna cotta to delicious effect, presenting a sophisticated layered confection that was more like a delicately textured yet robustly flavoured zabaglione than a panna cotta.

Couple at the next table accepting a free meal. I wonder who they write for? And will they declare the freebie?

Despite a very rocky start, I came to immensely enjoy my meals at Osteria. It’s not the simple, rustic eatery that its name implies, but that shouldn’t stop you from enjoying the generally deft, well-crafted dishes.

Osteria’s tucked-away location inside the bowels of the Barbican Centre make worry about this restaurant’s long-term financial prospects though. Passing trade is effectively non-existent and the surprisingly large dining room was rarely even half-full, apart from days when a popular exhibition or showing was on.

Much more worrisome from a diner’s point of view is the somewhat cavalier service which is unbefitting of such a skilled kitchen. This is, of course, fixable but these front of house problems are worth bearing in mind when eating at Osteria (and you should). Osteria – another Four Star kitchen dragged down by Three Star service.

What to order: Almost everything, especially the fish, polenta and desserts…

What to skip: … except for the tripe and possibly the tagliatelle