There are many annoying things about flying from Heathrow. Its distance from just about anywhere else in the city. The absence of electrical sockets. The unbearable delays in take-off and landing. And then there’s the food. All of Heathrow’s departure terminals are blighted by restaurants serving food that are often, at best, dreadfully mediocre and only a few notches above the slop served once you’re in the air. Against this background, my expectations for The Perfectionists’ Cafe at Terminal 2 were low. A side project of Heston Blumenthal, the menu is based around comfort food apparently featured in Heston’s In Search of Perfection TV series and all dishes are, in theory, available all day. 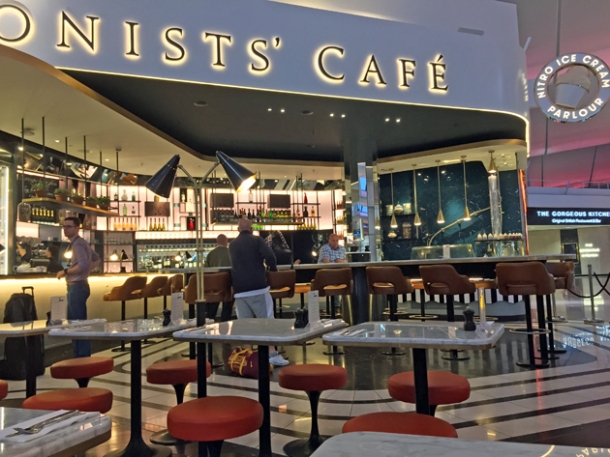 The dining area bleeds out into the rest of the terminal. Heston’s name is, surprisingly, kept to a minimum – you’d hardly know he was involved from the signage, menus and other in-restaurant paraphernalia.

In practice, on the morning of my visit, a large chunk of the menu was unavailable. I could still have opted for steak or fish and chips for breakfast, but eventually opted, after much indecision, for the Full English breakfast. What’s remarkable about the Full English was how utterly understated yet accomplished it turned out to be. The gently fried eggs were runny and mildly rich. The pork sausage was small but meaty, as were the trimmed rashers of unsmoked back bacon. A large, firm portobello mushroom was accompanied by halved umami slices of tomato. Broad slices of toasted brown sourdough were served with butter on the side. My personal highlight was the large slice of black pudding – moist, crumbly and tinged with sweetness and saltiness. All of it was very filling without being too greasy or heavy – a mundane fact that shows just how slipshod many Full English breakfasts elsewhere have become. 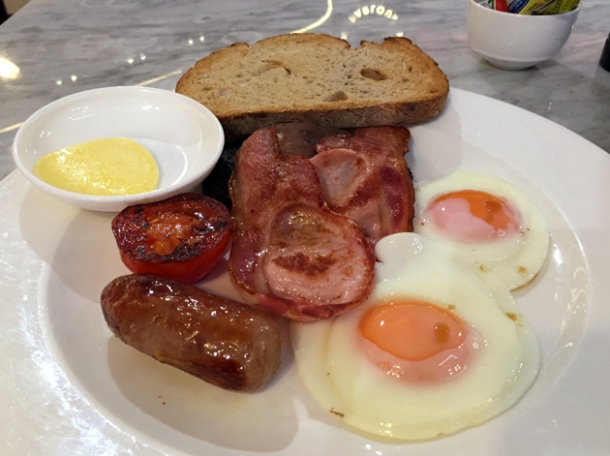 Arrived within six minutes of ordering with the restaurant approximately 1/5 full – important if you’re in a hurry to catch a flight. 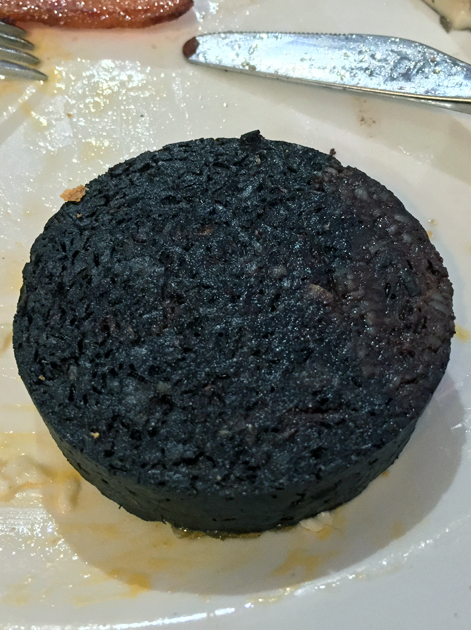 This full English may not look generously portioned, but it was very filling. Especially with this surprisingly nuanced and delicious black pudding.

Far less successful were the ice creams apparently frozen using liquid nitrogen. The chocolate flavour was a bland non-starter, while the hazelnut was only mildly nutty at best. The blackcurrant sorbet was the best of my trio – sweet, very sharp, and not too crunchy with thankfully small ice crystals. Not even my chosen toppings could save the disappointingly dreary chocolate and hazelnut ice creams – the chocolate-covered coffee beans were little more then vajazzled Minstrels, the raspberry crunch was indeed crunchy if little else, while the crystallised rose crisps added a mild rosewater-like flavour. 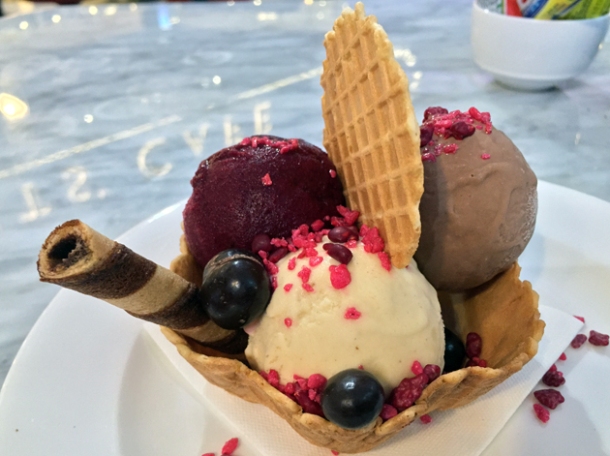 Arrived within six minutes of ordering.

The flat white didn’t have enough kick to keep me awake for long, but I won’t hold that against it given how monumentally travel-tired I was that day. It had almost no head to speak of, but it was still modestly bitter and reasonably smooth. 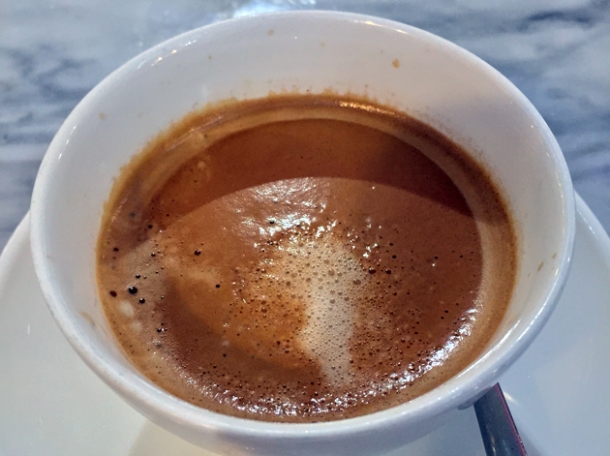 Arrived within three minutes of ordering.

Although the general idea behind The Perfectionists’ Cafe have remained generally unchanged, there have have nonetheless been some notable changes to Heston’s Heathrow Terminal 2 restaurant.

The kitchen’s trouble in offering the full menu on my original visit was perhaps a foreshadowing of its now revised menu – a truncated breakfast selection of the usual egg-based dishes before 11.30am with the full menu only available after that time.

The restaurant was far busier on my second visit – almost half full. The flat white from the first time around was okay at best, so it was no surprise that the quality of the coffee had deteriorated. It was oddly sour and tart with a non-existent head, very little kick and an almost total absence of silky smoothness. Poor. 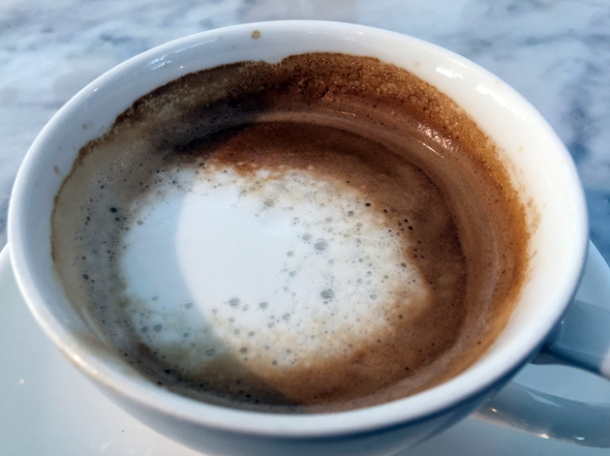 Arrived within five minutes of ordering.

Pizzas in many restaurants are a mediocre affair – in most airports, they’re nigh on inedible. This makes the kitchen’s achievement here all the more remarkable – a pliable, elastic Neapolitan-style base with a bit of chewiness. It’s not quite as good as the pizza bases at, say, Pizza Pilgrims in the West End, but it’s not too far off either.

The Salsicca pizza is a bianca or tomato-free affair. Although not mozzarella, the lightly smoked provolone and caciocavallo cheeses were nonetheless pleasingly creamy and elastic. There was little of the promised chilli, but the spinach was pleasantly bitter. Less excusable was the meagre amount of sausage, which meant there wasn’t nearly enough of its herby meatiness. Still, this was a surprisingly good pizza and an excellent one by airport standards. 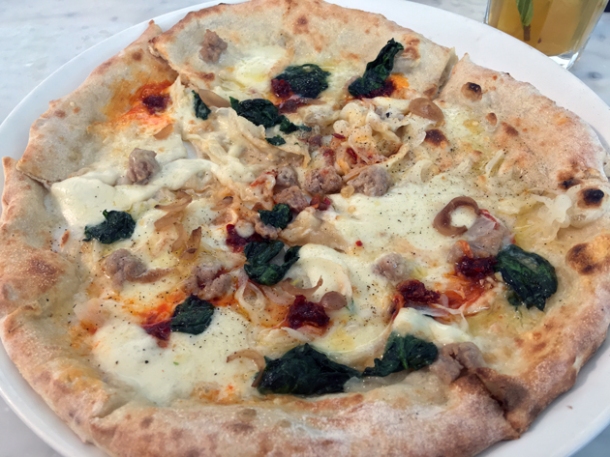 This took a troublingly lengthy 21 minutes and 44 seconds to arrive. 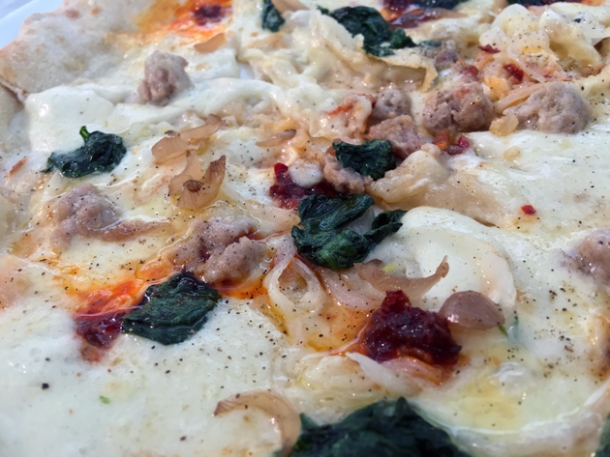 If you want a sausage fest, then don’t order this pizza. Fly to Germany instead.

The liquid nitrogen ice creams have improved, but not dramatically so. They were consistently cool, smooth and free of ice crystals. But neither the texture nor the quality, consistency and intensity of the flavours were as good as the best Italian gelato. The initially strong taste of the vanilla ice cream faded quickly, as did the mild nuttiness of the hazelnut. The salted caramel variant mostly tasted of one-dimensional salt. The toppings of dulce de leche pearls and a singular whole Oreo cookie added little. 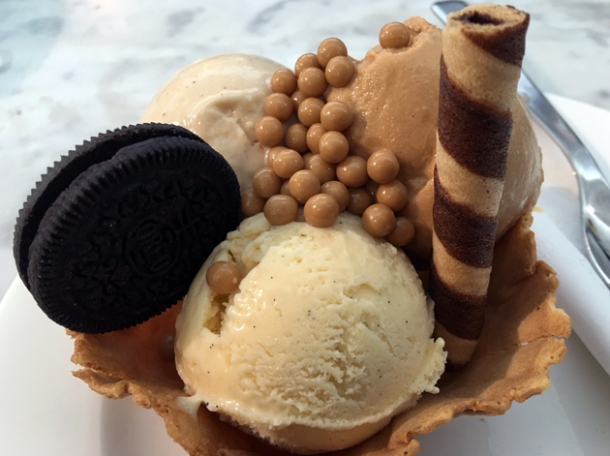 Arrived within five minutes of ordering.

I usually prefer to make multiple visits to a restaurant before coming to a Verdict, but that’s tricky with The Perfectionists’ Cafe given its Heathrow Terminal 2 location. Even based on two meals, it’s fair to say that while the Perfectionists’ Cafe won’t dazzle you with its food or broach any gastronomic frontiers, it’s of a reasonably high standard and is, for the most part, served quickly too. It’s not especially cheap, but neither is it outrageously expensive by airport standards and you could do far, far worse at Heathrow’s terminals.

Total cost for one person including soft drinks and service charge: £27 approx.

One thought on “The Perfectionists’ Cafe review – Heston does Heathrow breakfast”