Finally, a good restaurant in Islington

Oldroyd might sound like a wizened, unwanted hanger-on in an unmentionable anatomical structure, but it’s actually a new restaurant in Islington from one of the brains behind Polpo. Although independent from that burgeoning empire, Oldroyd’s menu immediately feels Polpo-esque – small plates, as well as a few larger dishes, with an Italian/Mediterranean influence.

Oldroyd is a small place spread over two floors and has a pared-back, vaguely Scandinavian-ish décor. The plump seats are comfy and the generous spacing between tables ensures that you don’t have to dry hump your neighbour just to get to the toilet. However, the tight spacing between the tables and walls means those of us with chunky spare tyres will still find manoeuvring into some seats a bit of a squeeze.

Oldroyd’s homely premises can get very hot during the height of summer, but a few fans and the warm, enthusiastic, efficient and chatty staff make it bearable.

Although the Cornish salami was allegedly made with seaweed and cider, I could discern little of either. The meaty, fatty, salty slices were still pleasing though – essentially a saucisson sec, it came with a big helping of tart pickled onions and cornichons to clear the palate.

Definitely not a pasty.

The squid, confit rabbit and broad bean paella turned out to be a disappointingly timid affair. Although suitably sticky, the rice wasn’t as moreish as I was expecting and was largely dependent on the moderately garlicky aioli for flavour. The small curls of squid were reasonably zingy, if a touch too soft texture-wise. Even more problematic was the meagre flecks of confit rabbit. The bunny meat wasn’t especially taut or fatty and was also far too soft – it might as well have been chicken, for what little it was worth. A damp squib all round.

Far better was the peach and curd panzanella. The chunks of bread in this salad were hard, crunchy and somewhat stodgy. While this is a traditional element of a panzanella, I couldn’t help but wish for carbs that were softer, fluffier and altogether more complimentary to the other, more pleasing elements of this salad. The delicately sweet, but still unmistakably fruity peach slices dovetailed neatly with the milky bits of fluffy curd and the crunchy runner beans. It’s an almost perfect summer dish – light yet distinctly flavoursome.

A fruit and cheese combination I can live with.

Peach turned up again in the pain perdu. The stewed, lightly sweet peach segment was a footnote to this dessert though, rather than the main attraction. The star was instead the fluffy, warming and hearty pain perdu which reminded me greatly of bread-and-butter pudding. A wintery-feeling pudding, it needed a better cooling element than the barely flavoured ice cream. The latter was, at least, very smooth with no large, crunchy ice crystals. Still, a well-made pain perdu with peach goes a long way.

If you just want an icy treat all by itself, you could do far worse than the sour cherry sorbet. Although the single scoop was a little miserly, it was icy without being bracingly, uncomfortably cold. The flavour was very true to the fruit – sour and almost syrupy in its sweetness, it was unmistakably sour cherry.

Where does one even *find* a bowl this small?

Oldroyd has occasional specials, such as gazpacho topped with crab meat. The bland crustacean flakes were inconsequential though, so it was fortunate that the chilled soup was more than good enough in its own right. Cool, crisp, sharp and laced with a little oil, it proved to be very refreshing.

‘if only just *once* they would’ve mentioned that gazpacho soup was served cold – I would’ve been an admiral by now!’

I wasn’t expecting much from the pork belly and pea croquettas, but these deep-fried little parcels turned out to be one of Oldroyd’s most accomplished creations. The crisp and oil-free shells were filled with what essentially a concentrated form of ham and pea soup. The comforting and homely concoction wasn’t what I was expecting at all, but it was very pleasing – especially when taken with the accompanying truffle mayonnaise. Unusually, this sauce-on-the-side actually did combine the distinctive earthiness of truffles and the creamy unctuousness of mayonnaise to delicious effect. It was an effective substitute for the pork belly-levels of fattiness missing from the croquettas themselves.

Do the truffle shuffle.

The inconsequential crab flecks from the gazpacho made a repeat appearance in the crab tagliarini. The thin and soft ribbons of pasta were equally unmemorable. The only saving grace here was the tangy and zingy taste of the rouille sauce.

Today’s procrastination was brought to you in part by Maru the cat.

Heritage tomatoes now appear so often on London restaurant menus, that it’s increasingly uncommon to see ‘standard’ tomatoes instead. There are good reasons for their proliferation though – the varied hued fruits used in the tomato and green bean salad ranged from boldly umami to sharp and sweet. The runner beans were firm, while the béarnaise reduction proved to be moreishly addictive with strong hits of fennel-like flavour.

The chocolate mousse was light, fluffy and reasonably bitter, but it was hard to appreciate either of those qualities when taking the mousse with the praline. Its crunchiness and one-note sweetness proved to be far too distracting. A bigger helping of the crunchy crushed pistachios and a small, extra pinch of crunchy salt would’ve been far better as contrasting elements to the flavour and texture of the mousse. The less said about the tepid raspberries, the better. 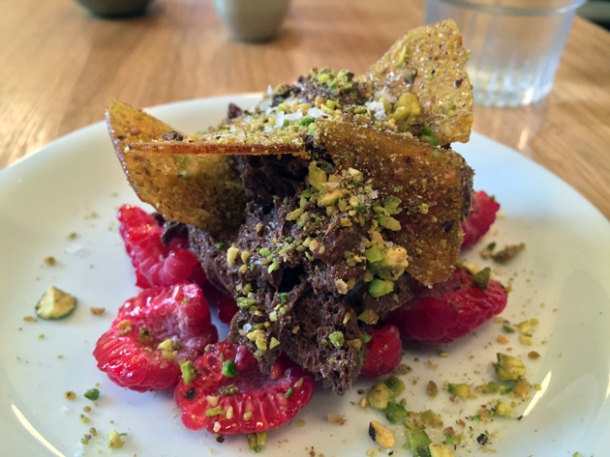 As friendly and efficient as Oldroyd’s service was, this just couldn’t hide the hit and miss nature of the food. Even then, the impact of the more successful dishes was lessened by a creeping sense of deja vu. This Polpo-ness is fine for Islingtonites who can’t bear to leave their Upper Street bubble, but for the rest of us this retreading of familiar territory combined with the kitchen’s so-so hit rate makes eating at Oldroyd a pleasant if ultimately unexceptional experience.