Soho isn’t short of pizza restaurants, but Pizza Pilgrims has a leg up on its competition. Having started out as a street market van that’s still touring London’s street food markets, Pizza Pilgrims has already built up a legion of fans. Even more importantly it has a traditional hand-built pizza oven. The van serves up an impressive range of pizzas, but both the generosity of the toppings and the size of the pie itself is limited by the logistics of cooking from the back of a converted van. That shouldn’t be a problem with a bigger and better stocked kitchen, so I eagerly sat down for a weekday lunch with Porn Master, Socialist Worker, Chip Butty, Resume and Sloane Ranger.

The restaurant is split over two levels with a couple of stools on the ground floor and a larger, if still slightly cramped main dining room in the basement. Service was friendly if a tad on the slow side.

All of the pizzas had a delightfully soft and fluffy base with a slightly chewy crust. The floppy base won’t suit everyone, but the creamy mozzarella and sweet, punchy tomato sauce are definite crowd pleasers. I opted for a pizza topped with ricotta, artichokes and smoked garlic oil. The latter was hard to make out, but the hearty helping of juicy, tender artichoke hearts went down a treat when paired with the the light, milky and subtly musky ricotta cheese.

The pizzas are a little bigger than the ones from the street van. Unless my gammy eyes are betraying me once again.

Both Socialist Worker and Chip Butty opted for the pizza topped with thin slices of Napoli salami. The meaty, fatty strips of salty meat pleased both the notoriously unadventurous Chip Butty and the studiously indecisive Socialist Worker, who usually covets other people’s food no matter how good his own is. That wasn’t the case here.

Resume was the only one of my dining companions to join me in opting for a meat free pizza. She was generally happy with her tomato sauce-free portobello mushroom pizza, although the fior di latte was a little muted and there wasn’t a lot of the promised truffle oil. It wasn’t chewy or excessively greasy which can happen with tomato-free pizzas for some reason. 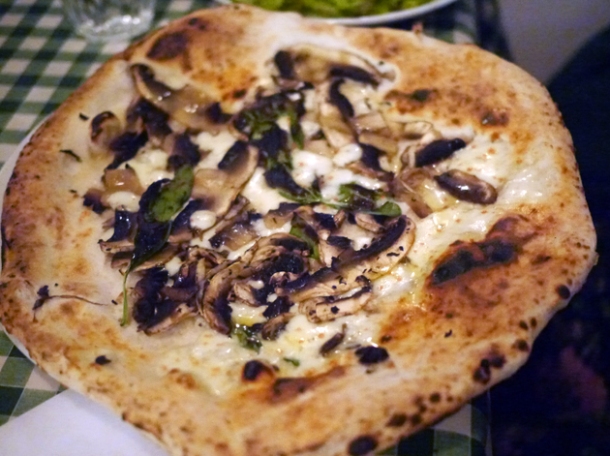 Sloane Ranger likes her food spicy and added a fair sprinkling of chilli slices to her tomato sauce-free fennel sausage and wild broccoli pizza. The milky creaminess of the fior di latte was a little stronger here, but the real stars of the show were the chunky helpings of sausage and broccoli. The coarse, meaty, slightly bitter sausage was a perfect match for the slightly bitter, leafy broccoli. The pleasingly mild levels of bitterness were enhanced and complimented well by the basil and Sloane Ranger’s chilli. Easily one of the best pizzas here.

I was the only one to opt for a dessert and I had to go for the intriguing ricotta and nutella pizza ring. Half of the soft and slightly chewy ring of crust-like pizza dough was filled with nutella; the other half was filled with ricotta. The latter was very tame, leaving the unmistakable taste of nutella to steal the show. Although it’s not quite the boldly flavoursome dessert I was hoping for, it is a warm, comforting one and that’s good enough.

Think of it as weird Italian-inspired doughnut. If that helps you.

Pizza Pilgrims wasn’t perfect. The kitchen could’ve been a touch more generous with the toppings and some of the topping combinations weren’t quite as flavoursome as I had hoped for. When things came together though, they came together very beautifully indeed and the soft, fluffy bases are second only to Franco Manca’s. Pizza Pilgrims may not be perfect, but it’s still easily my favourite pizza place in Soho.

Reservations: only taken for groups of 8-16 people.

Average cost for one person including tip: £13-15 approx.