Eating at Kurobuta has, if nothing else, confirmed that I’m slowly devolving into a cantankerous old fart. Kurobuta is a modern take on the izakaya, a Japanese food pub, situated on a residential street just off Edgware Road. Originally due to open last Autumn, it was so delayed that it opened a pop-up in Chelsea that, at the time of writing, is still running.

Kurobuta is informal, as befitting an izakaya, but its atmosphere has all the charm of a vuvuzela concert. If you’re seated at the communal tables, then be prepared for the high, backless stools which I found to be back-breakingly uncomfortable. If the management insists on using a nearly unreadable font for the menu, then turning up the lights would be a good idea – otherwise you’ll have to use your phone for light and squint.

All this wasn’t nearly as irritating as the braying Sloanie wannabes and Mayfair exiles who seemed to make up most of the clientèle on both of my visits. If you manage to avoid tripping over the wobbly cocktail sippers near the small bar, then brace yourself for the glass-shattering screech of their voices as they attempt to have conversations by yelling at ever louder volumes. Aural waterboarding has never been so stylish.

My intense dislike of Kurobuta’s atmosphere aside, I had severe doubts about the menu as it was devised by a chef who used to work at Wabi – an overpriced and deeply flawed Japanese restaurant that has now closed to the disappointment of no one. The idea here is that you order three or four dishes and share them.

My worst fears were confirmed by the tuna sashimi ‘pizza’. What meagre character the lean strips of fish had was drowned out by the zesty, mildly spicy dressing and the stodgy, crunchy double-stacked pastry triangles that formed the base of this ‘pizza’. Woeful. 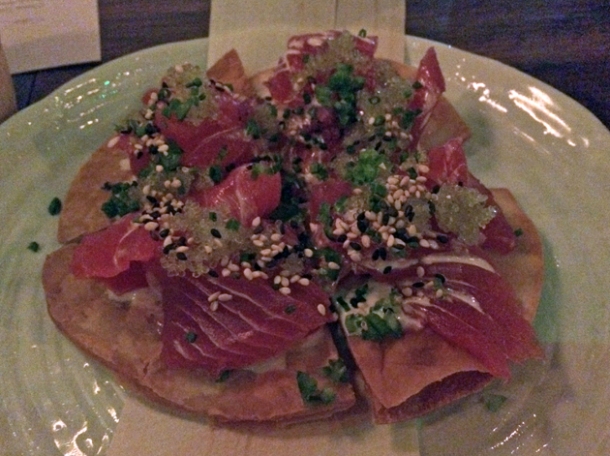 Almost as bad was the squid karaage. The crunchy coating was actually fine – oil-free with a vaguely malty taste – but the limp sliver of flesh inside each morsel was barely identifiable as squid. The same zesty, mildly sauce that accompanied the sashimi pizza made an unwelcome repeat appearance. 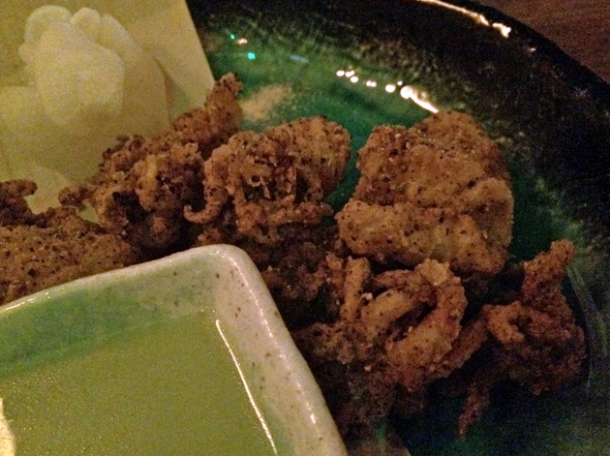 Was the squid on holiday? Did it call in sick?

Kurobuta can clearly source good seafood when it wants too. The molluscs used in the scallop sashimi were big and thick with a fresh creaminess that was delightful. However, the kitchen insisted on smothering the big beauties in a tart, slightly sour, slightly spicy dressing, allegedly a kimchi butter, with coarse tobiko-like fish roe in it. Both elements work fine apart, but not together with the butter obscuring the taste of the scallops.

The gua bao, or Taiwanese buns, were one of the few good things at Wabi but even better versions of those little Formosan sandwiches are now available at various places across London. Kurobuta’s version was merely okay at best. The rice flour buns weren’t especially fluffy, but did have an odd but nonetheless pleasing maltiness to them. The pork filling was little more than an uninteresting ring of fat livened up by a fleeting hint of woodiness. This was momentarily enhanced by the very salty, nut-studded treacly sauce, but this soon passed as well. The most accomplished part of these so-so hirata buns was the sweet and sour taste of the gently, but expertly pickled cucumbers.

One of the things that I hated most about Wabi were the overwrought, needlessly complicated desserts. A similarly fussy style is clearly evident at Kurobuta as well. An icy rhubarb ice cream had its tart, sweet taste enhanced by a rhubarb foam but another much more earthy foam and something that tasted a lot like marzipan clashed with both. Odd fluffy bits of cake were dotted about, but were too far and between to leave much of an impression. A pointless dessert – I want my wasted calories back. 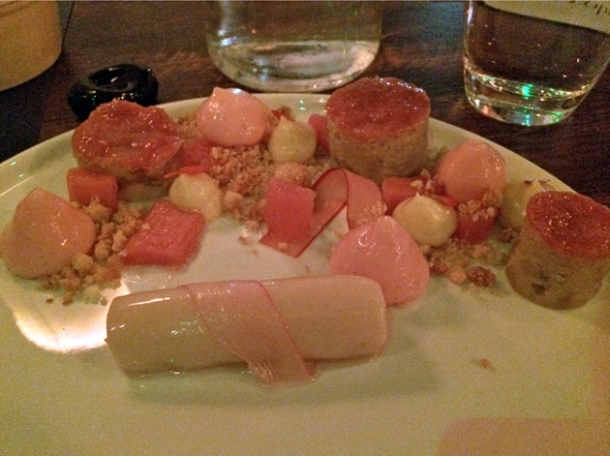 Despite a dreadful first meal at Kurobuta, I was willing to give the restaurant a second chance if only because Baron Greenback and I needed a centrally located place to plot our nefarious schemes for world domination. Both the odious toad and I enjoyed the expertly made pumpkin tempura – the sweet and creamy chunks of veg were coated in a light, crisp and oil-free batter which made the zesty, mildly spicy dipping sauce all the more unnecessary. A far better accompaniment were the shavings of pickled cucumber – their crisp sourness proved to be surprisingly complimentary to the tempura. 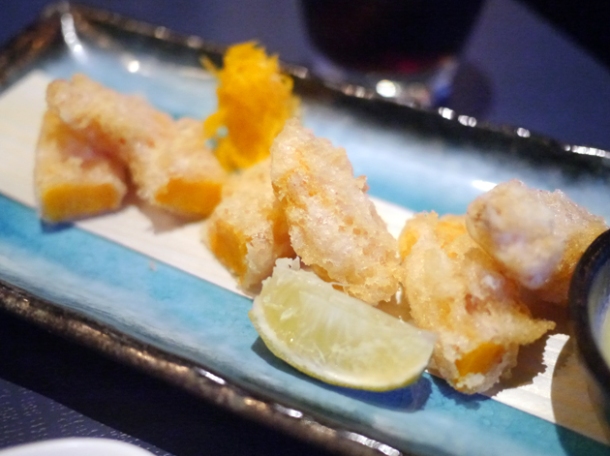 Sticking with another similarly simple, more traditional dish proved to be wise. The grilled chunks of aubergine glazed in miso were satisfying thanks to their soft texture, butteriness, zinginess and the occasional tang of miso.

Baron Greenback doesn’t like mushrooms for some inexplicable reason. I was more than happy to devour all of them – the mixture of varyingly sweet, tender and light mushrooms was complimented surprisingly well by the occasional tang of melted gorgonzola although the pine nuts added little. As satisfying as this dish was, it felt incomplete as it’s essentially okonomiyaki toppings but without the okonomiyaki. 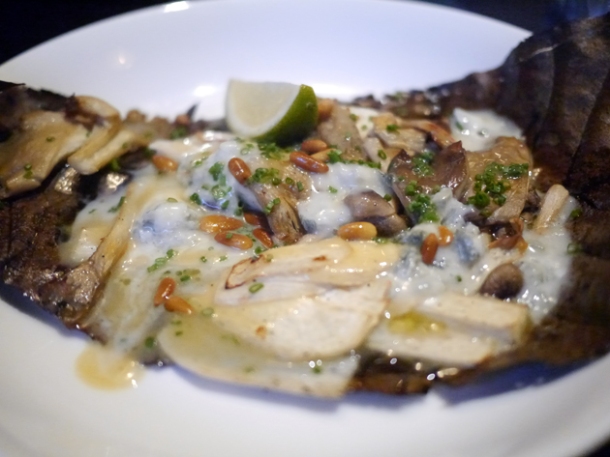 The bland taste of the slightly waxy textured duck confit was deeply unimpressive. I wasn’t sure what to make of the oddly treacly sauce that accompanied it. The tart pickles and refreshing watermelon chunks were good, but that couldn’t hide the disappointing nature of what could have been a decadent duck dish. 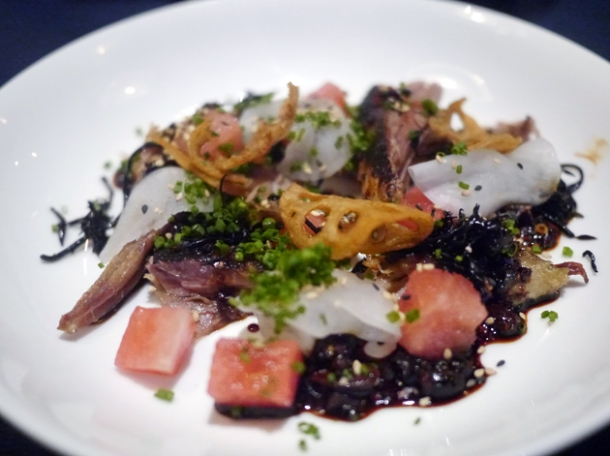 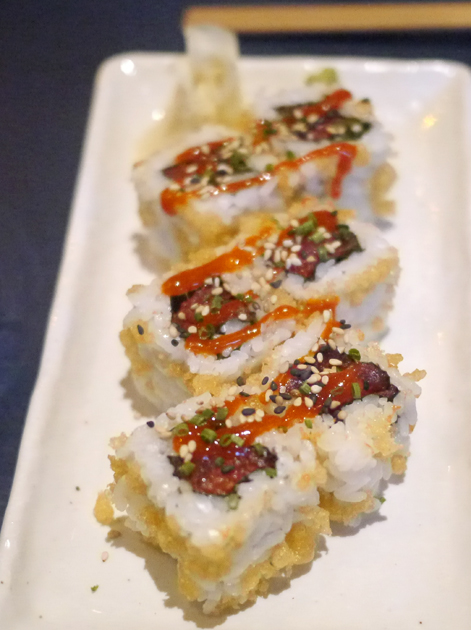 I couldn’t quite tell if the rice hot pot was properly seasoned with soy sauce and dashi, but it was reasonably moreish even though the meagre strips of mushrooms, zesty rinds and vaguely wasabi-flavoured tobiko added little. You do need a spoon to eat the loosely packed rice which isn’t very sticky, but getting one from the staff can be tricky. Although the waiters were all warm and friendly, they seemed to disappear for large stretches of time.

Things unravelled with the arrival of Baron Greenback’s tea smoked lamb. Although the small cutlets did have a whiff of jasmine and woody smokiness, this subsided quickly leaving nothing but the oddly fibrous and disappointingly tough meat.

Baron Greenback was unconvinced by his dessert, the pistachio chocolate forest. Although it wasn’t great, I still found it enjoyable enough – fluffy chunks of vaguely flavoured pistachio cake were complimented well by an earthy chocolate mousse and an icy sorbet.

The Japanese carrot cake didn’t taste that different from a standard carrot cake, but the fluffy shreds of cake contrasted nicely with the crunchy biscuit crumbs and a sharp, zesty palate-cleansing sorbet.

While my second meal at Kurobuta wasn’t as disastrous as the first, I still can’t recommend this restaurant. The incredibly hit and miss menu, the lack of any dishes that are both really outstanding and really inventive as well as the intensely irritating atmosphere are all made all the more unbearable by the unjustifiably high prices.

At £50-60 per head excluding alcohol, I’d much rather eat at the relatively nearby Dinings which, while more sedate and a little more formal, shows how expensive, inventive Japanese food should be done. For cheap and casual but more traditional Japanese fare, I’d rather have ramen at Tonkotsu or katsu curry at Ten Ten Tei. Anywhere but Kurobuta.

What to order: Pumpkin tempura

Average cost for one person including soft drinks: £50-60 approx.