Because you’re worth it

I’ve been to more than my fair share of Japanese restaurants in London, but none of them can hold a candle to the oddly-named Dinings. This Paddington stalwart is highly regarded and for very good reason.

Despite its vaunted reputation Dinings’ premises are surprisingly spartan and cramped with a sushi bar upstairs and a small smattering of tables downstairs – booking is essential. The best to place to sit is at the bar where you can watch the sushi chef and his crew at work, although in winter this means you’ll have to put up with the draught from the door as walk-in punters try nabbing a table in forlorn hope.

Although Dinings has a fairly length menu comprised of both traditional and more innovative Japanese dishes, I opted for dishes from the specials blackboard that mixed both approaches.

I started off with a selection of oysters prepared and dressed in a variety of sauces that emphasised various aspects of the little molluscs. I honestly can’t remember what was in each dressing, but the first brought out the creaminess, the second highlighted the brine-ish quality and the third emphasised the plumpness of the little blighter. I couldn’t tell if these were Pacific rock or native oysters, but in this case it doesn’t really matter that much as these little beauties are winners. 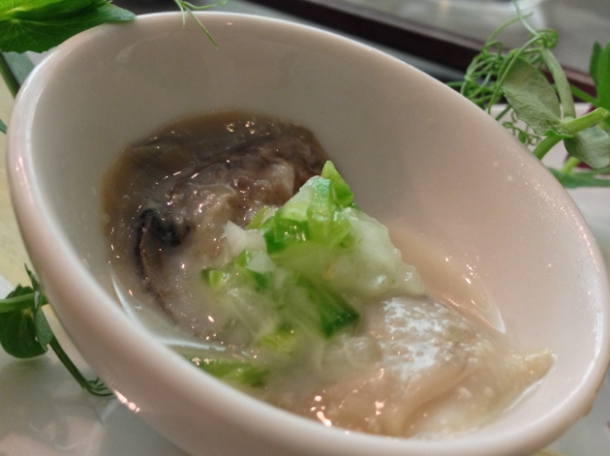 London is your oyster.

As beautiful as a pearl.

The chopstick-averse will be glad to hear that some of the sashimi dishes are served canapé-style in spoon, although it’s still best to use the sticks to savour each slice of fish. The lobster sashimi is cooked rather than raw, but the firm and meaty pieces have been done just right – they’re not overcooked or excessively soft and are complimented well by the spicy tartare-like dressing. 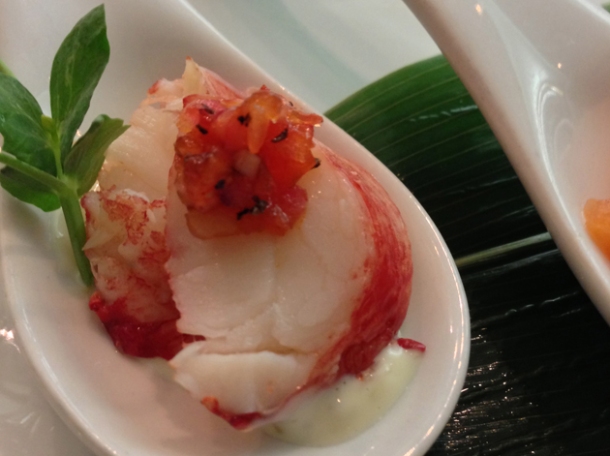 More than a mouthful is a waste.

The butteriness of the salmon slices was complimented surprisingly well by a sweet, mustard-like dressing. The overall effect was somewhat reminiscent of a ceviche. 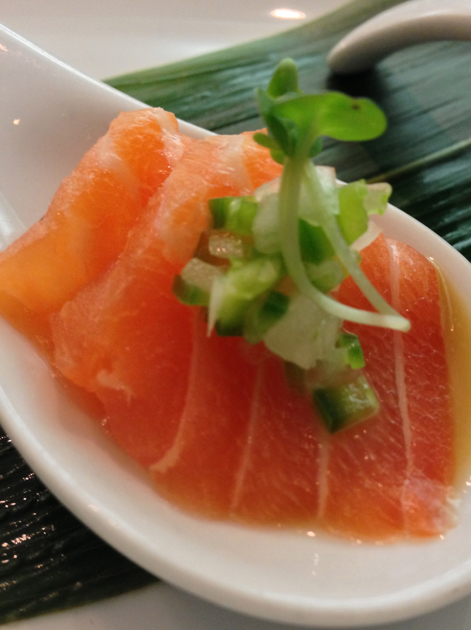 I’ve been told that salmon sashimi/sushi isn’t a traditional dish in Japan.

The yellow tail was delicately sweet, but the real highlight was the tuna. Tender, yet meaty and delicately fatty, it puts the tuna sashimi at many other Japanese restaurants to shame.

However, even the tuna sashimi paled in comparison to the tuna sushi. Apparently culled from the fatty neck area of the fish with a Japanese name I can barely pronounce never mind spell, it was so good it has ruined my life as I’m now incapable of eating any other tuna roll. Each roll was meaty with a delicately chewy edge and a lightly buttery fattiness that melted in the mouth in the most sensual manner possible. Excellent.

Gurnard is a particularly hideous-looking fish that’s some what similar to the scorpionfish often used in bouillabaisse. Sadly, in the only misstep of the night, its delicate taste was drowned out by its punchy onion, tomato and pepper salsa dressing. 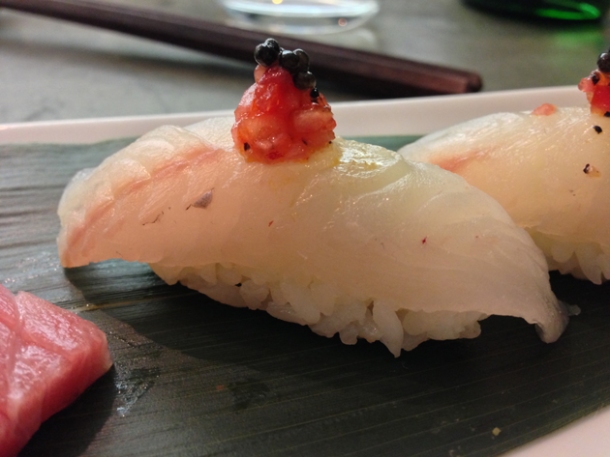 Although advertised as karaage, the battered deep fried monkfish tasted more like tempura. In any case the batter coating was thin and crispy with a slight chewiness to it. The hearty helping of monkfish was meaty and greatly resembled lobster in its firm, milky meatiness and was complimented well by its salty miso-based dipping sauce. 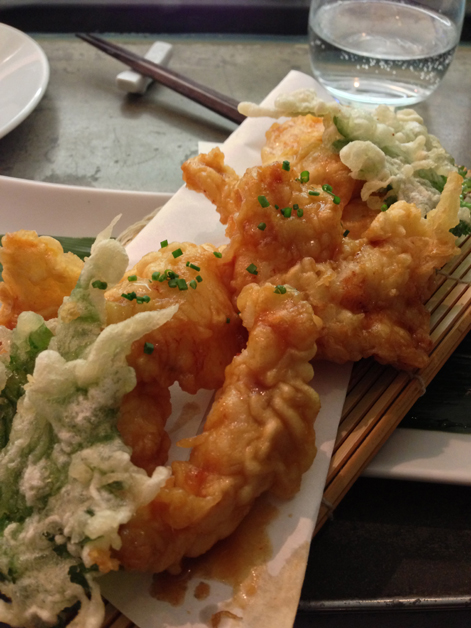 More like tempura than karaage, but very good either way. 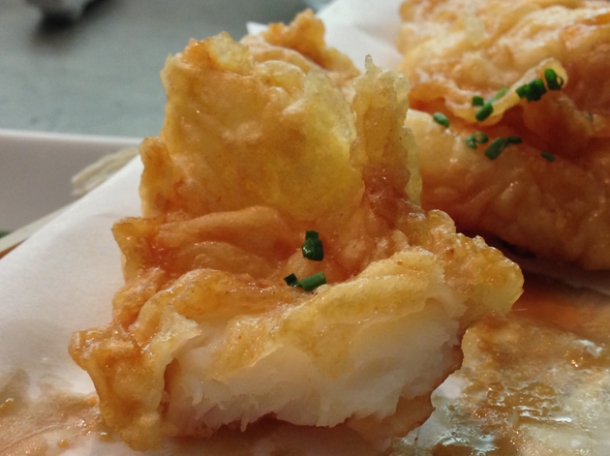 Eating at Dinings could become a habit.

For dessert I was torn between the green tea affogato on the regular menu and the autumn truffle ice cream on the specials board. My waiter recommended the truffle ice cream without hesitation and I’m glad I followed her choice. The truffle shavings were exceptionally earthy with a rich, mushroom-ish flavour that seeped into the ice cream making this an unusual but incredibly addictive dessert. My only complaint is about the ice cream itself – it could be creamier with smaller ice crystals, but its subtle sweetness is just right.

Scoop one of two.

The food at Dinings is exceptionally good. It’s expensive, but it’s easily the best Japanese restaurant I’ve been to in London so far and I can’t wait to go back.

Total cost for one person including soft drinks and service: £90