The only way is Mandalay?

Going out for a curry in London usually involves traipsing down to an Indian or Thai restaurant, but a more curious option is Mandalay which is almost certainly the capital’s only Burmese restaurant. Mandalay is one of Templeton Peck’s regular haunts and the prospect of Burmese food was enough to tempt myself, Templeton, Happy Buddha, Socialist Worker and Veal Smasher out to the arse end of Edgware Road.

Mandalay has been around for years and it certainly feels like it. The cramped square dining room is festooned with Burmese chintz and it has room for only two dozen covers or so. One particularly odd throwback is the outdoor privy. The staff are friendly, even if their English is a little stilted.

We all started off sharing several plates of fritters – deep fried wodges of dough stuffed with various fillings. Thankfully free of excess oil, they were nonetheless quite hearty and the version filled with fresh shrimp was my favourite thanks to its mild saltiness.

Veal Smasher was adamant about ordering some chicken and vegetable samosas which turned out to be tiny little things. Although zesty and slightly spicy and not at all greasy, the bitty, heavily minced fillings weren’t very satisfying.

I also ordered a bowl of bottle gourd soup which was highly reminiscent of a bottle gourd dish I had eaten at Soahc in Shanghai. The soft, fibrous vegetable was tender and fruity, while the soup itself was peppery and dotted with vermicelli and very salty shrimp. It could’ve done with less pepper, but overall it’s a surprisingly tasty soup.

That’s more than can be said about the coconut vegetable noodles which comes in a tomatoish soup that tastes like a thickened version of Thai tom yum gung soup. Combined with the copious amounts of root vegetables, this makes it a surprisingly stodgy dish. I wasn’t fond of the actual noodles either which were either excessively soft wheat noodles or crispy, brittle vermicelli. Thanks, but no thanks.

Was almost tempted to send it back.

Thankfully the curries weren’t as disappointing, if only because they’re rather simple, bold dishes. The oddly-named ‘pickle-style lamb’ has a tartness to it that compliments the mild spicy heat quite nicely.

My gaggle of curry devotees clearly had a thing for lamb as Socialist Worker chose a minty lamb curry, which is a rather obvious combination of flavours, while Templeton Peck’s plain lamb curry was fruity and tomatish. All the lamb curries were blessed with tender, stewed chunks of meat.

Veal Smasher bucked the trend with his pick of chicken with tamarind which had a very bold citrusy, orange-like flavour to it. Happy Buddha’s own choice of a prawn curry tasted very similar. He also wisely ordered some dried shrimp garnish. The small, chewy and very salty bits of shrimp added a much needed layer of taste and texture to all the curries. 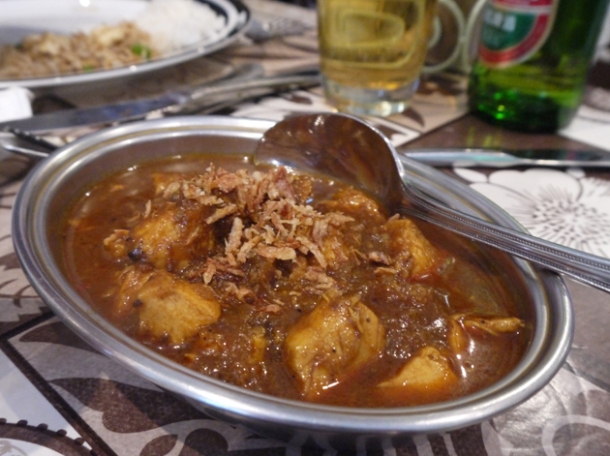 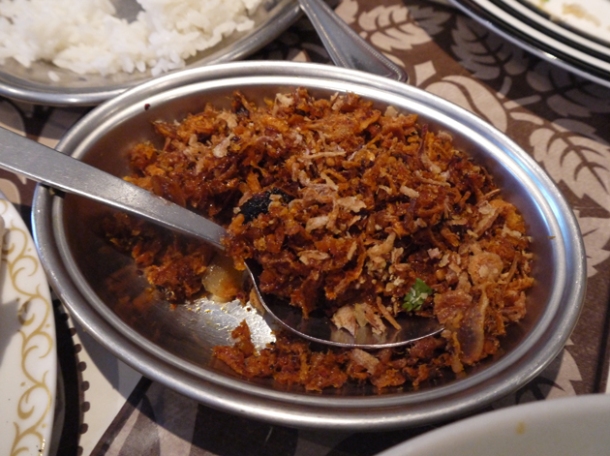 Sorry for some of the iffy photos folks.

Veal Smasher has a massive addiction to naan bread and was adamant about ordering almost more naan than we could eat. The naan were very good though – thin and soft, but not too oily, with a milky, buttery taste. A perfect mop for soaking up excess curry sauce.

No loafing around here.

Thankfully Happy Buddha was on hand to provide some refreshing vegetables by ordering the raw papaya and cucumber salad. The refreshing, tart mixture of relatively firm fruit and vegetables was very similar to Thai son tam salads and although it didn’t have quite the same depth of flavour as the best Thai salads, it was still a welcome antidote to the relative heaviness of the curries.

A sign that the Happy Buddha is nearby – a dish is partially demolished within seconds of it reaching the table.

Despite all the samosas and fritters, Veal Smasher hadn’t had his fill of deep fried food and ordered some banana fritters for dessert. Although the large dollop of vanilla ice cream drizzled with honey accompanying the fritters was unremarkable, the batter surrounding the bananas was surprisingly light and oil-free. 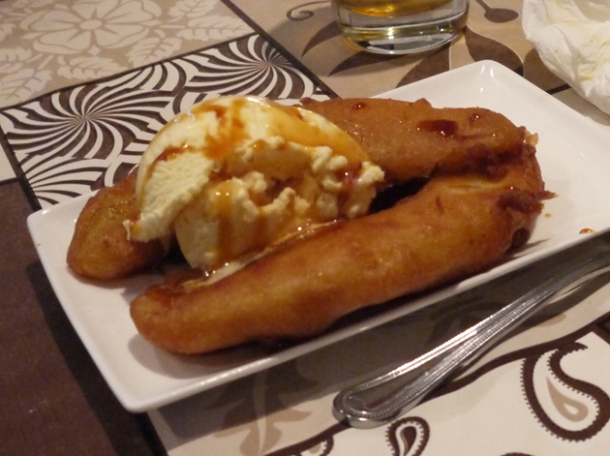 Got some healthy fruit? Deep fry it!

Happy Buddha didn’t order a dessert per se, but he did have have a falooda, a drink composed of rose syrup, vermicelli, milk, jelly and tapioca. Although it was very sweet with a heavy taste of pistachio, Happy Buddha has had better faloodas elsewhere so he wasn’t especially impressed.

Since neither Socialist Worker or Templeton Peck were in the mood for dessert, I did the only decent thing and had two desserts myself. The coconut agar, or jelly, was firm and dense but didn’t really taste of coconut and wasn’t as creamy as I was expecting either. It tasted of very little, despite its unusual green colour. 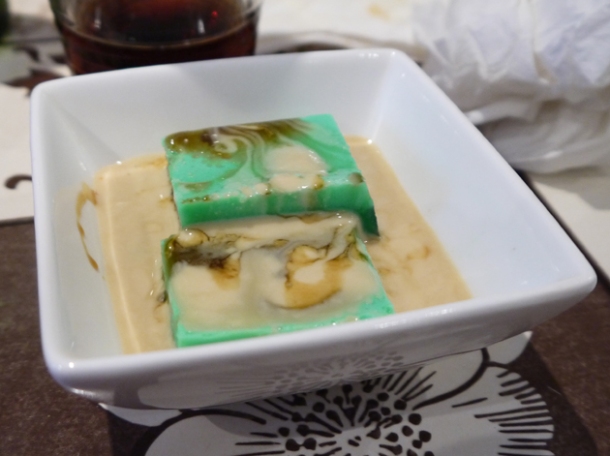 A jelly by any other name?

Oddly, the tapioca tasted more of coconut than the coconut agar did. It also tasted heavily of pistachio which complimented the coconut flavour very nicely. Although a bit on the small side, it’s a much more interesting dessert than either the agar or the banana fritters.

The food at Mandalay is, on the whole, simple and satisfying but it’s not really different enough from Indian or Thai food to make it worth the trek to Edgware Road. If you’re going to be in the area though, then it’s worth a visit.