Eating in a bowling alley conjures up images of limp, overpriced hot dogs and nachos but the Bayswater branch of All Star Lanes has a surprisingly enticing menu. Wicket, Kangaroo Face and I found ourselves eating there after knocking down some pins in honour of a mutual friend’s birthday.

The subterranean All Star Lanes has a retro, 1950s Americana feel to it, but in a classy rather than a cheesy way and this extends to the pink clad female waiting staff who look like pink lady extras from Grease. Their grace and politeness is all the more remarkable given the squealing children’s parties and the imbecilic, self-centred PG Wodehouse-like buffoonery of inebriated young men they had to put up with on our weekend evening visit.

The menu is very meat heavy and Kangaroo Face and I ended up ordering a large amount of pork between the two of us. His first pig dish of pork crackling was unimpressive though. Although large, the dry wafers of crackling were not only bland but excessively hard and crunchy too.

Kangaroo Face tore out several chunks before I took this photo.

My own contribution to the decimation of the porcine population involved ordering the short rack of ribs. Although tender, the white meat was lacking in character – the apparent lack of any fat probably didn’t help. The sticky marinade was one-dimensionally sweet and tended to cling to my fingers rather than to the ribs themselves. These ribs would be laughed out of any American barbecue restaurant and aren’t even acceptable in London which finally has a respectable rib shack in the form of Soho’s Pitt Cue.

Target in sight. Take him down.

Kangaroo Face was pleasantly surprised by his stewed pork and beans. The pork was tender and moist, while the beans had just the right of firmness – neither too hard nor too soft. The smoky, sticky sauce had an even consistency too – not too lumpy nor too watery.

Sorry for the iffy photos folks. Still getting used to the new camera. I’ll get there eventually.

Given that the kitchen managed to turn out a decent pork and beans, Wicket’s depressingly average burger is all the more surprising. The plain, dry patty was too small and there’s nothing worth saying about the bun or the tomato, lettuce and gherkin toppings. The accompanying fries were a little weedy, but at least they were crispy and ungreasy.

Wicket wasn’t impressed with his side dish of rainbow coleslaw either which he condemned as forgettable and flawed. The cold cabbage and limp chilli had a bit of crunch, but was otherwise very bland (sorry folks, no photo of these two).

My choices of fries were made from sweet potatoes rather than plain spuds and although they are suitably sweet and fluffy, they’re rather floppy and limp. The sweet potato chips at Kua’aina are better with their bolder sweet potato flavour, crispness and added saltiness. 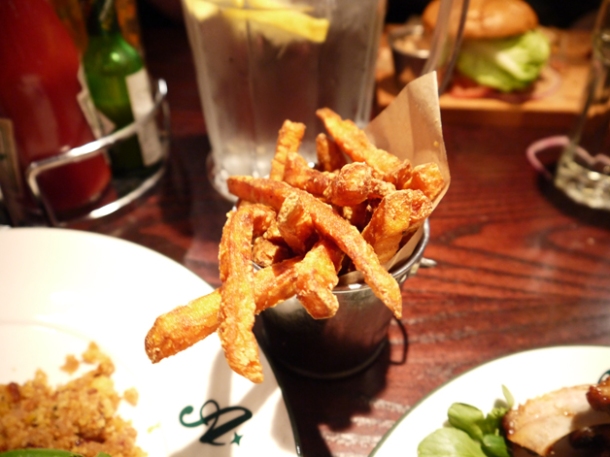 Somewhere in between fries and chips.

Some brief ambition on the kitchen’s part was evident in my main course of spatchcock chicken served with cornbread ‘stuffing’ and pecans. The cornbread stuffing was unsurprisingly served on the side (how would one stuff a spatchcock chicken anyway?), but it tasted more like the buttermilk-infused battered skin of fried chicken than it did of cornbread.

The chicken itself was a bit dry, but the sweet, nutty pecans gave the meat a taste surprisingly reminiscent of a honey roasted chicken. Sadly, the texture of pecans was far too inconsistent – some were hard and crunchy, while others were too soft and squidgy and this could’ve been avoided with a pecan glaze although that may well have been beyond the kitchen’s abilities. Although flawed, there’s the potential for an interesting yet hearty dish here. 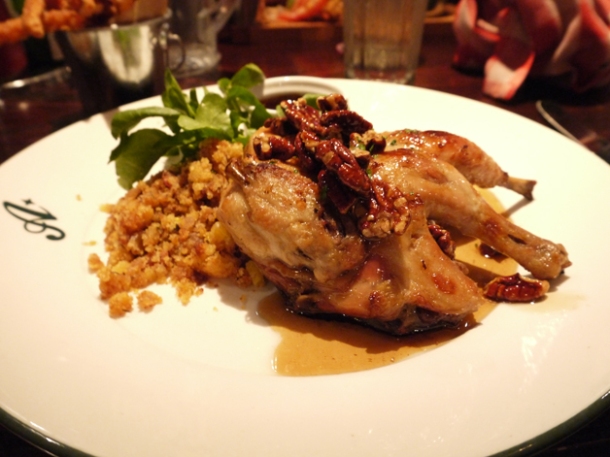 How would one stuff a spatchcock chicken anyway?

Neither Wicket nor Kangaroo Face had room for dessert, but I loosened my belt and made room for the bourbon raisin chocolate brownie with ice cream. Sadly but not surprisingly, this dessert wasn’t as good as its billing. The dry, characterless brownie had precious little quality chocolate in it, never mind bourbon or raisins. The vanilla ice cream had almost certainly been scooped out of a large, generic catering tub of the stuff judging from its bland nothingness. 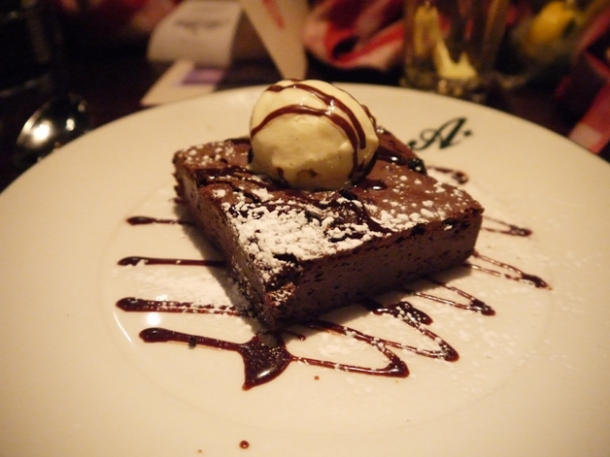 I washed down my food with a root beer float which paired a rather mundane root beer with a very small dollop of the same unexceptional ice cream. Wicket wetted his whistle with Moosehead lager, a hoppy and refreshing American brew that deserves a wider audience. Kangaroo Face downed various lurid coloured cocktails to the point where he was slightly too inebriated to tell me anything meaningful about them, although he did seem to enjoy them immensely.

They can’t even do root beer floats right.

In a way, writing this review is a mildly futile exercise. As part of a chain, the kitchen at All Star Lanes is unlikely to improve substantially while the boozy, boorish bowling bores and bawling brats will no doubt continue to stuff their faces there until the end times descend upon us.

For everyone else though who might consider eating at All Star Lanes following a game, my advice is not to bother. Although there are occasional glimmers of hope, I’d much rather have some roast duck at the nearby Bayswater branch of Four Seasons than risk another run at the sprawling menu.

Total cost for one person including soft drinks: £25-30 approx.