In London’s increasingly crowded restaurant scene, new eateries often need a hook or some unique selling point to pull in the punters. For restaurants drawing on the rich culinary heritage of a foreign country, one easy hook is a dish or regional cuisine underrepresented in the UK. Ittenbari is a new Japanese restaurant specialising in ramen noodles, long-established Japanified versions of Chinese wheat noodles, and is a spin off of Ryukishin in Osaka.

However, unlike Koya, Frith Street’s udon specialist which has stuck rigidly to its core offering of udon noodle soups, Ittenbari doesn’t quite have the balls to serve ramen and nothing else (like many ramen restaurants in Japan), opting instead to serve up a ragbag assortment of other Japanese favourites too.

Madness? No! This is Spartan.

With the assistance of ramen fanatic The Lensman I popped along to Ittenbari on several occasions to sample a good swathe of its smallish menu. Don’t go expecting exquisite surroundings and service though – Ittenbari is clearly a quick eat-and-go kind of place. The kitchen tile walls, wooden floors and bright, harsh lighting are all very utilitarian and the service, while quick, leaves something to be desired – surely it’s not too much to ask to have my old plates taken away when you bring me new ones?

The ramen noodle soups are all very similar, differing only in the stock on which the soup is based. The shio ramen uses a salt and meat base for example, while the shoyu uses an even saltier soy sauce, chicken and pork based stock. Oddly, the shio broth tastes just as much of chicken and pork than the shoyu does.

Both use firm, springy, eggy noodles, a ragbag assortment of vegetables with a firm bite, a salty just-cooked egg and thin, fatty, tender slices of pork. Both the shio and shoyu ramen are pleasing in a simple, hearty way. They’re not showstopping though – The Lensman has had better ramen noodle soups on his various meanderings through Japan itself.

We weren’t expecting much from the gyoza, so we were pleasantly surprised by the firm, supple skins which were neither too crisp nor too greasy or oily. The minced pork and vegetable filling was hearty and the dipping sauced added a salty touch.

The sushi platter isn’t bad, but it’s nothing to write home about. The salmon and tuna nigiri left me non-plussed, but the grilled eel unagi nigiri was moist and crisp, the salmon roe ikura roll was suitably oily and the omelette tamago roll was gently sweetened with mirin. 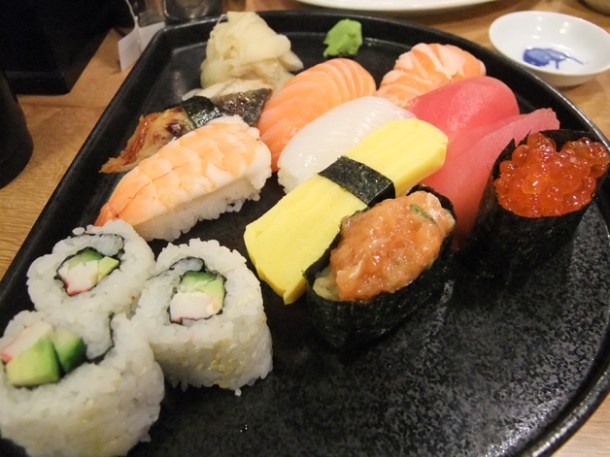 If you want sushi, you’re better off going to Ten Ten Tei just down the road.

Wash it all down with some chilled barley tea. Sweet and nutty.

Why is good iced tea so difficult to get in Britain? It’s not like we’re short of good tea.

Going back for more

I headed to Ittenbari on two further occasions, both without The Lensman, to taste some of the non-ramen options on the menu. The cha shu don, or roast pork with price, is available in regular and mini sizes. Sadly, the pork is mostly quite dry and characterless, but it’s saved from complete mediocrity by the tangy, moreish bean-based marinade.

This little piggy went to market…

While most of the ramen dishes at Ittenbari are noodle soups, there is a lone stir fried version served with seafood. I wasn’t fond of the overly crispy noodles though (I prefer softer, more supple fried noodles) and most of the toppings from the squid to the vegetables are barely worth mentioning either. The only exceptions are the salty, soy-infused chunks of pork and the fresh and firm prawns. The whole thing is held together by a tangy garlic sauce.

Katsu curry is another Japanese dish which deserves an establishment, or at least a food stand/truck, all of its own. The British chip shop-style curry sauce is thick and sweet, but not very starchy or peppery. It’s acceptable though, unlike the batter enveloping the pork which is stodgy, hard and chewy rather than crisp and yielding. If you want katsu curry, you’d be better served heading to Ten Ten Tei just down the road. At least some tart picked peppers are included and the accompanying miso soup is cloudy and gently salty with firm mini cubes of tofu blessed with a pleasing nuttiness. 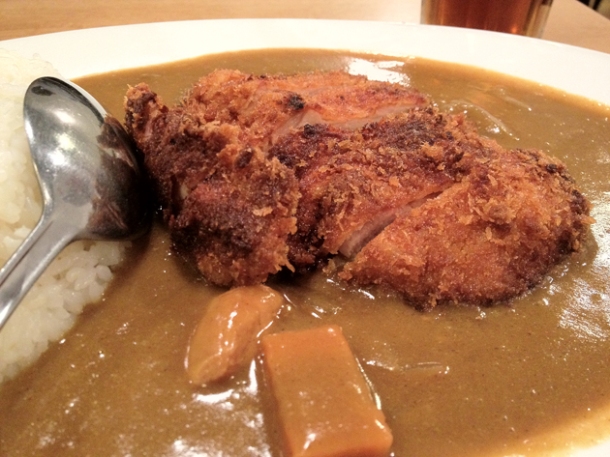 From what I’ve seen, the majority of the non-ramen dishes really aren’t worth bothering with which isn’t surprising for what’s supposed to be a ramen-specialist. However, while Ittenbari’s ramen noodle soups are good enough for a cheap refuelling and will get ramen novices inducted into the dish, they’re not quite up to The Lensman’s standards which means London is still waiting for its ramen revelation.

Total cost for one person including soft drinks: £14-20 approx.