I’ve had mixed results dining with The Euro Hedgie on his home turf just south of the river near London Bridge. José is excellent (and I’m looking forward to upcoming sister restaurant Pizarro), while Tuli and The Draft House are merely OK. Magdalen is quite different from all of them – a small, homely little place serving up Modern European food with distinct British and French influences. You could easily miss it if you weren’t looking for it. 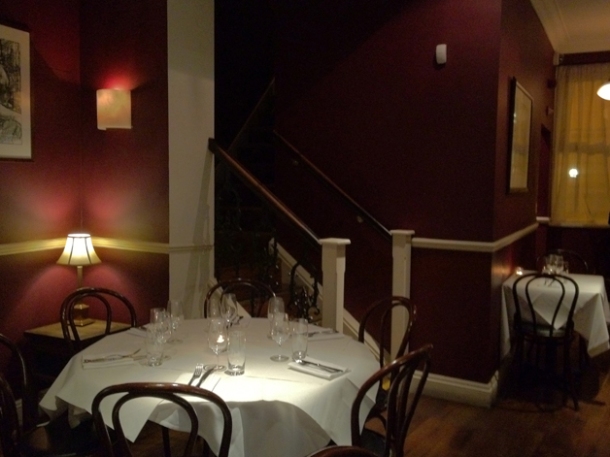 The Euro Hedgie and I rocked up on impulse on a busy Friday evening, so we had to be content with bar seating – reservations are clearly essential. Service was mixed – the two dudes at the front of the house were friendly and helpful, while the dudette was rather gruff. Service was quick and efficient at first, but started to stutter as the restaurant filled up as the night progressed.

The Euro Hedgie tickled his taste buds with a Kingston Black Apple aperitif. Unlike myself the Hedgie enjoys his booze immensely, but even he found the aperitif a little too potent at first. He got used to it quickly though and enjoyed slurping it down, likening it to an extra syrupy cider (sorry folks, no photo of this one).

I’m a bit squeamish about eating snails, but The Euro Hedgie will wolf them down quite happily. He therefore plumped for the chicken wings sautéed with snails without hesitation. He greatly enjoyed how the mild taste and texture of the chicken balanced out the rich, mushroom-like earthiness of the snails. ‘Funky’ as he put it. 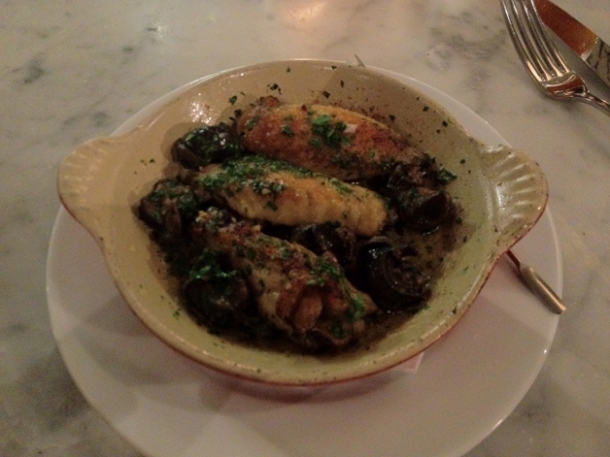 Sorry for the blurry photo folks. Blame it on the Hedgie.

I started off with a delicious appetiser of gently poached hake. The soft, flaky fish had a slightly salty tang to it which was complimented well by the firm broad beans and the slightly bitter leaves doused in a herby, creamy garlic mayonnaise. 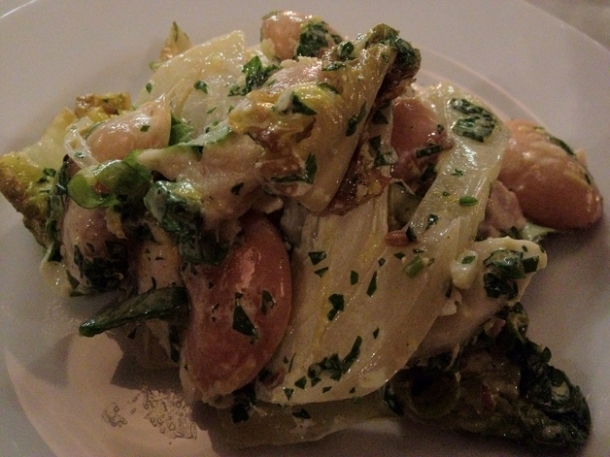 Hake. A fish that only ever seems to appear in restaurants.

I’ve had sweetbreads at other restaurants, but few can match the version served at Magdalen – not even the mighty St. John. The sweetbreads here were an odd assortment. Alongside the firm, strong tasting kidneys, I couldn’t identify all of them, but their soft, jelly like texture and offaly flavour went down a treat. 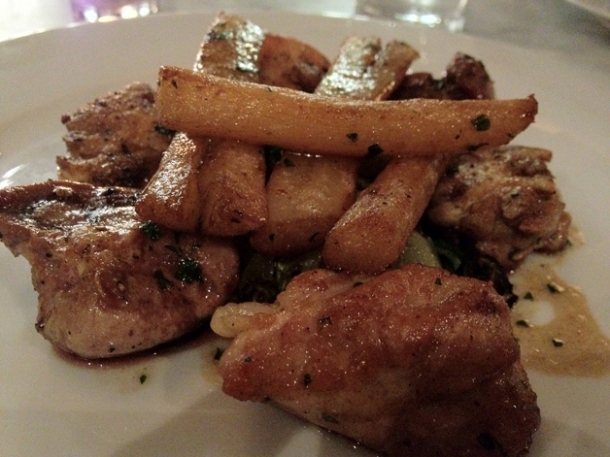 The Euro Hedgie’s main course of braised hare isn’t quite as spectacular and gamey as the version sometimes available at Wild Honey, but I was still impressed by the tenderness of the flesh which still managed to retain its denseness despite the slow cooking. Neither of us could quite identify the fluffy foam-like mash circling the hare though. Our best case is that it’s some sort of polenta – if it is, it’s a bit too wispy compared to the creamier, denser polenta I’ve had at Wild Honey. 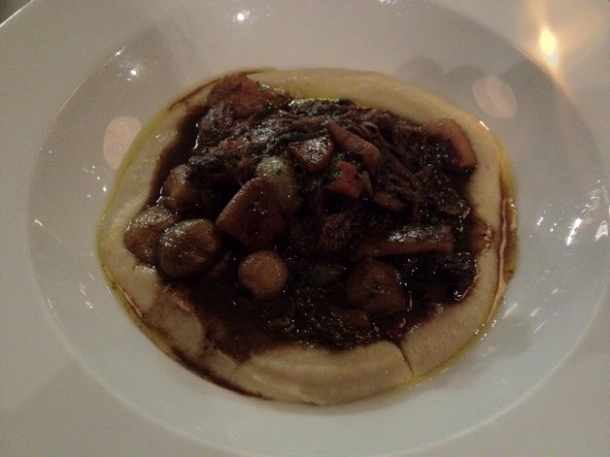 We both shared a green salad which turned out to be rather ordinary. I appreciated it nonetheless, if only to offset the meatiness not only of the rest of my meal at Magdalen, but also the meatiness of my lunch earlier that day at Satsuma.

The Euro Hedgie had to bugger off early – either to get drunk or to corner a market or something. Or possibly both at the same time. I was left to try dessert on my own, opting for the quince, prune and apple crumble served with custard. I was disappointed with the custard, presented in a jar for pouring at your discretion, which was a little too thin and milky for my liking. 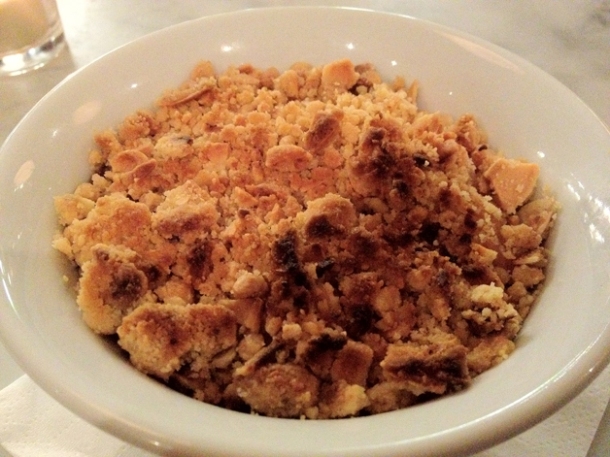 The crumble itself was one of the best versions I’ve had of this homely pudding. Quince needs to be in crumbles more often – the large, tart slices used here taste far more interesting than the rather mundane slices of apple. The slices of prune were rather sparse, but once you find them, the dark syrupy sweetness contrasts very nicely with the tartness of the quince. To get to the fruit, you have to break through a delightfully crunchy crust which has hints of both almonds and corn. Thumbs up. 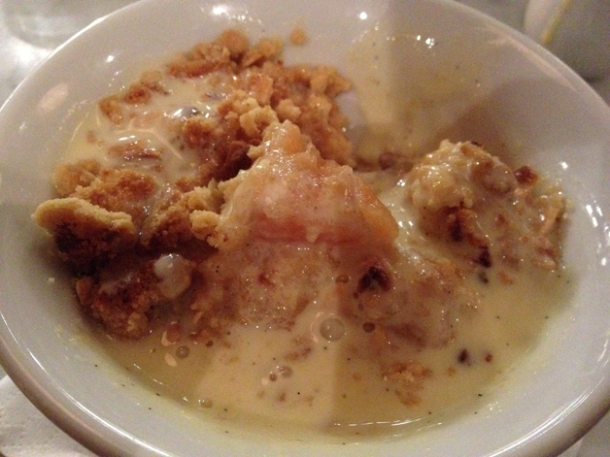 Custard that doesn't quite cut the mustard.

I had little idea of what to expect when I first stepped through the door at Magdalen, but now I can’t wait to go back. Although there are some service issues, the deliciously well-balanced dishes more than make up for these glitches. My brain says four stars, but my heart and stomach say five stars, so five stars it is.

Total cost for one person including drink: £40-50 approx.

One thought on “Magdalen review – food worth lusting after”