A lot of new London restaurants have adopted some variant of the stripped back ‘industrial’ look common in Shoreditch – bare brick walls, exposed ventilation ducts and naked concrete floors. I’m thoroughly bored of this now cliched aesthetic, so I was pleased to discover that Story has opted for an entirely different style of decor.

Situated on the site of a now demolished public lavatory near Tower Bridge, Story immediately stands out from its neighbours thanks to its handsome wood panelling and floor-to-ceiling glass windows. These windows not only give a view of the small but picturesque lawn out front, but also of the Shard in the distance. The high ceiling and the light streaming in through the big windows makes the small dining room feel airy and much larger than it actually is. Story’s interior decorators couldn’t resist the dreaded bare concrete floors though, which meant that sound bounced off them helping create a relatively noisy dining experience.

Story only has tasting menus – a £65 ten course menu which is cheaper than similarly sized menus at other Modernist restaurants in London. There’s also a slightly cheaper six course menu at £45, although skipping three savoury courses and one of the three desserts for the sake of £20 is barely worth it unless you’re also short on time. Shorter, cheaper menus are apparently served at lunchtime.

The Euro Hedgie and I opted for the ten course menu which started at a break neck pace with the starters coming out so quickly that we barely had time to finish the amuse bouche and catch our breath. The three amuse bouche were nothing if not visually arresting. A vividly orange coloured and earthy tasting flower filled with a salty oyster cream set the meal off with a bang.

The flower of one’s youth.

I was non-plussed by the rabbit ‘sandwich’, a finger-sized puff of anonymised, textureless meat although I did appreciate the macabre whimsy of the tart, pickled carrot topping. The Hedgie was more enamoured with it and while texture can be successfully separated from taste to stunning effect, I remain unconvinced that this can be done with meat. 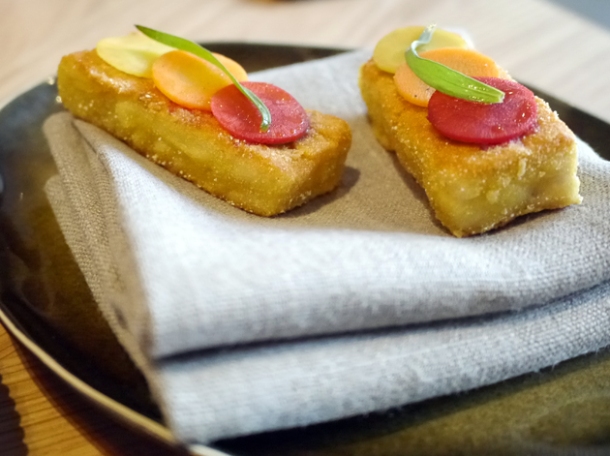 My favourite amuse bouche, which the Hedgie wasn’t as fond of, was the cod skin. Resembling a posh poppadom shard, the crisp crackling had a salty, intensely fishy taste balanced out by a herby garnish.

Following the quirky sophistication of the amuse bouche was a starter that was both surprisingly different and simpler in style. A hearty, chunky serving of sourdough bread was, for some reason, presented in a leather pouch. Accompanying it was beef dripping and rapeseed oil in the form of a candle. Although the bread was suitably tart and hearty, it also overpowered the lardy taste of the dripping in its melted, liquid form. The beef dripping took on a bolder taste that was more able to hold its own against the bread when it congealed into a concentrated paste. In this form it was far too easy to imagine the lard blocking up my arteries, although the fruity meat relish added some much needed moistness and lightness.

Fat of the land.

Fruit of the loom.

The next dish apparently combined some of the chef’s favourite flavours – apple, burnt onion and gin. The Hedgie rightly pointed out that gin isn’t a flavour but a lifestyle choice, although that wasn’t the main problem with this dish. The sweetness of the burnt onion was balanced out by the acidity of the apple and the booziness of the gin, while the thyme oil acted as a unifying element. However, this rather intellectual combination just wasn’t especially satisfying at a gut level.

If the shellfish used in the scallops, cucumber and dill ash dish weren’t raw, then they were at least very lightly cooked. The tender, quivering scallops were startlingly fresh with a taste and scent evocative of the fishy smell that hits you as you walk through the door of a fish monger. I was thoroughly unconvinced by the sweet, crisp cucumber balls and weird spheres of dill ash which not only added little to the scallops, but actively drew attention away from them.

The scallops are both small and far away.

One of my favourite dishes of the evening was the crab with smoked leek, rapeseed, pear and lovage. Although I’d have preferred a firm meaty claw rather the bitty head meat, it was complimented very nicely by the strong, herby lovage oil and the gently smoked leek, while the pear added some crisp, refreshing sweetness. It was so good, I ate it all before I could remember to take a photo.

Potatoes usually form the basis of a side dish rather than a course in of themselves. Here, a firm hemisphere of potato was served alongside a creamy soft mash that had an acidic flavour due to the addition of radish. A few sprigs of barley grass added an extra layer of moreishness, although the oddly neutral black oil was a strange addition. It all sounds very odd, but it’s just flavoursome and interesting enough to work as a tasting course in of itself.

Beetroot, raspberry and horseradish sounds like a random selection of words thrown onto a page rather than a dish, but this odd combination of ingredients worked surprisingly well. The earthy taste of the small cylindrical pieces of beetroot were complimented nicely by the sweetness of the raspberries, with the horseradish acting as a spicy palate cleanser. The horseradish takes the unusual form of small, icy, crumbly blocks. Somehow infusing the typical horseradish heat into a crumbly form with a very atypical icy cold finish emphasised the spice of the horseradish rather then detracting from it. Splendid.

The heat of snow.

The final savoury course was a more traditional affair, but no less satisfying. A hearty and meaty slab of ox cheek cut away into exceptionally tender strands and was served in a moreish sauce. The moreishness of the sauce and the meatiness of the beef was complimented very well by sweet and sour hemispheres of cherry as well as by the bitter leaves and the distinctive taste of the firm cauliflower. The flavour of the small cauliflower floret was enhanced by a yeasty cauliflower cream that was very satisfying in its own right.

If you’ve never had milk delivered to your doorstop in glass bottles, then you not appreciate the whimsy of the first dessert delivered to the table in miniature milk bottles. The bottles were filled with a thin layer of tart and sour rhubarb coulis topped with a layer of custard cream, although this upper layer was more milky than creamy or custard-ish. This yoghurt-ish concoction was pleasant enough, but it would have been rather forgettable if it wasn’t for the quirky presentation. 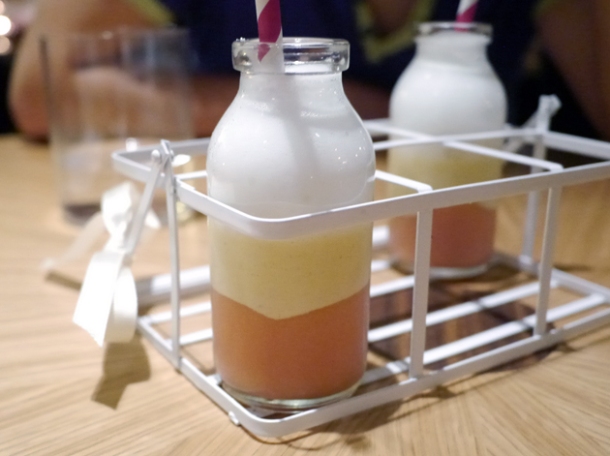 Cream of the crop?

Far more interesting was the lemon sorbet, although this simple name hardly does this dessert justice. The sour, acidic fruit was represented in numerous forms from an icy, crumbly sorbet to a bittersweet cream and a crisp, bitter, icy shell that been pockmarked to resemble the skin of a lemon. Delightfully accomplished.

The final dessert of the evening took inspiration from Goldilocks and Three Bears. Three small bowls, each filled with a different oat porridge – too salty, too sweet and just right. The too salty porridge was exceptionally, almost inedibly salty and oddly flavoured with what appeared to be shaved almonds. The two sweet porridge tasted heavily of honey, but in a very sickly, artificial way that was reminiscent of Sugar Puffs cereal. The third and final porridge, which should’ve been ‘just right’, was an odd tasting combination of sharp lemon and fennel, sweet raisins and butter. None of the porridges were especially satisfying. 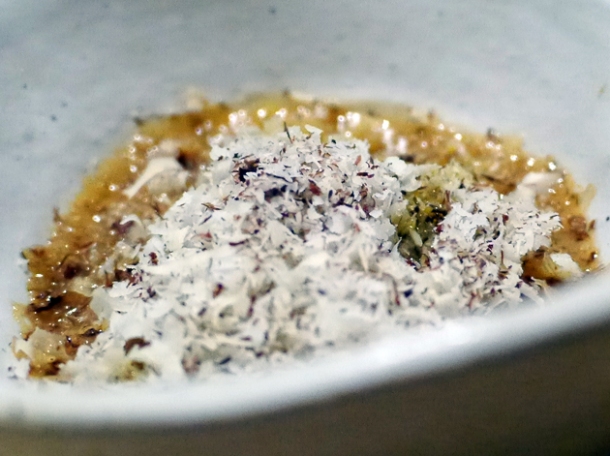 I’m fond of the elegant decor at Story and there’s no doubting the whimsical inventiveness of the kitchen, but the food was by no means an unconditional success. Some dishes were indeed wonderful but others sacrificed accomplished, balanced cooking for the sake of a visual in-joke where the punchline falls flat. Nevertheless, Story shows great promise.

Despite my hesitancy, Story is already incredibly popular with reservations hard to come by. However, until the kitchen breaks itself in I’d much rather eat at the nearby Magdalen. Although Magdalen’s style is very different and isn’t as flashy in its presentation, its cooking is consistently excellent and that’s a story worth writing home about.

Total cost for one person including soft drinks and service when shared between two people: £76 approx.