Stylish surroundings, but is the food any good?

Satsuma used to be a by-the-numbers Japanese restaurant that could be depended upon for a tasty bowl of udon noodles but little more. The Soho eatery has now been remodelled and reopened as self-touted katsu curry specialists (long-time Londoners will probably remember the dim sum restaurant that used to sit on the same site). Given that it’s just a few yards away from Ten Ten Tei down the street, which makes a great katsu curry, I had to give their version of this homely Japanese dish a try with the help of fellow katsu fanatics the Lensman and the Flame Haired Squelchie.

Satsuma’s décor is undeniably eye-catching with most of the covers taking the form of striking semi-private orange-coloured booths. Service was generally quick and efficient, if varying in sentiment from sullen and grumpy to bored and indifferent, no doubt a side effect of Satsuma’s Chinatown-based owners, Royal China. The reservations policy is unfathomable though – according to the staff member I spoke to on the phone, reservations are only taken when they’re not busy. Wait, what?

The booths are orange. Like a satsuma. Get it? No, me neither.

The Lensman skipped starters and I wish I had done the same. My salmon sashimi had all the life refrigerated out of it and I have my doubts as to whether the wasabi is the real thing or simply coloured horseradish paste (a common trick). 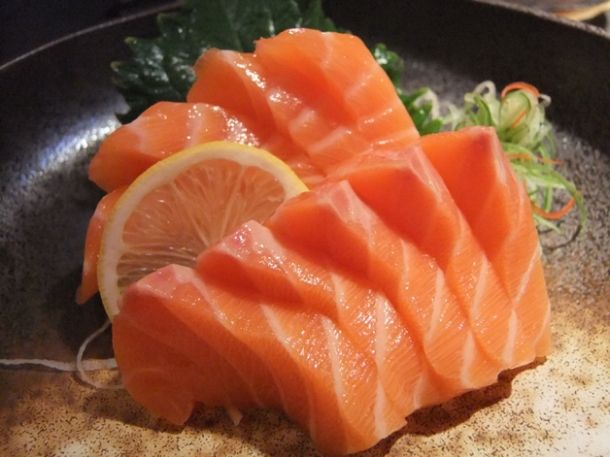 Squelchie had better luck with her miso-basted slices of aubergine. After letting the steaming slices of vegetable cool down, we both liked the sweet, moreish tang the miso added, but the aubergine slices themselves were far too soft and squidgy for our liking. A firmer texture would’ve been preferable.

Don't be such a softie.

Onto the main event. The Lensman opted for the pork katsu curry, while I went for the chicken version. Although he thought the pork could be fattier and therefore juicier, he seemed to more or less enjoy his curry. I wasn’t quite as accepting. The pieces of chicken in my curry were chunky and firm, but the soft breaded coating wasn’t crispy enough. Meanwhile, the curry sauce was starchy but was otherwise quite bland – it wasn’t especially spicy or sweet. Even the accompaniment of pickled peppers was muted. For an alleged katsu curry specialist, it’s quite a let down. 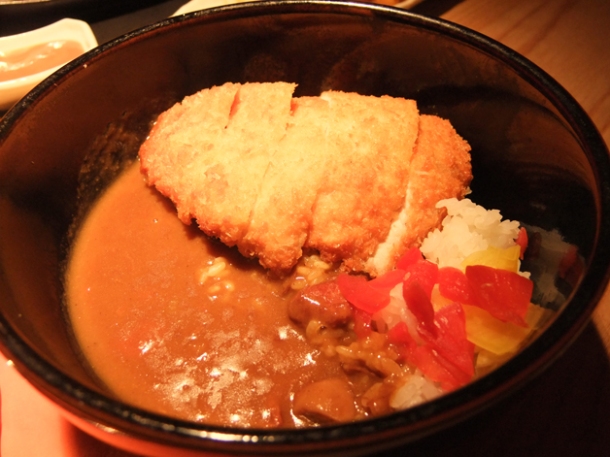 For reasons that were unfathomable at the time, but strangely prescient in hindsight given the disappointing katsu curry, the Squelchie opted for a curry-less katsu platter of vegetables such as baby corn and asparagus. While my katsu chicken wasn’t crispy enough for my liking, the Squelchie had no qualms about the thin, crispy yet fluffy coating on her vegetables.

Can you deep fry mung beans?

Deep fried ice cream may sound like an abomination, but it can work quite well. Except when it’s served at Satsuma. The Lensman skipped starters so he could save his rakish figure for the tempura ice cream. The deep fried batter was surprisingly thin and chewy which I didn’t like since I was expecting it to be either crisp or fluffy. The solid ball of icy cold, flavourless ice cream at the centre of it all didn’t impress me either. 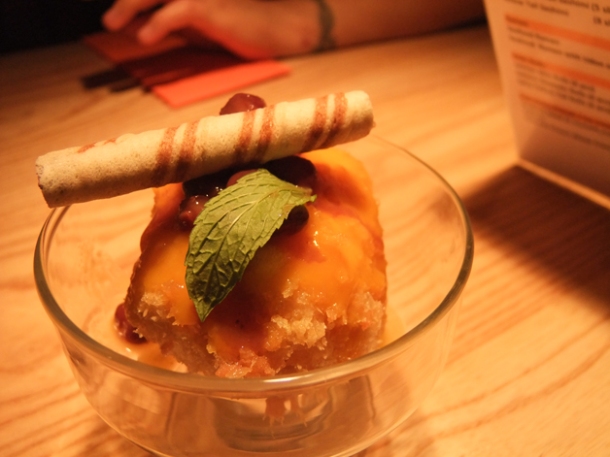 Squelchie chose the katsu ice cream. The breaded coating here was quite thick, but like the tempura ice cream it wasn’t especially fluffy or crispy. The ball of ice cream here started out surprisingly warm yet hard, but became progressively colder and softer towards the center. Intriguing, but I couldn’t tell what flavour it was supposed to be.

Whoever first invented green tea ice cream is a genius.

A fairly broad selection of Japanese beers are available, including Squelchie’s tipple of Asahi Black, but I stuck to tap water. Much to my waiter’s apparent annoyance.

Satsuma may look a lot nicer than the down-at-heel Ten Ten Tei, but the latter has far superior katsu curry (and sashimi too while we’re at it). Satsuma’s version isn’t awful like Koi’s, just utterly forgettable. The desserts aren’t especially well-executed either. Unless you’re in Soho with a katsu curry craving on a Sunday, when Ten Ten Tei is closed, give Satsuma a miss.

Reservations: not taken (I think).

Total cost for one person including drinks: £25-30 approx.