Is Alan Yau’s Thai chain still serving quality food as it expands relentlessly across London? The Picky Glutton visits a couple of them to find out…

For many Londoners Busaba Eathai needs no introduction. Alan Yau’s series of Thai restaurants are known for their sleek, stylish looks and low prices as much as for their food. What started out as a lone location on Wardour Street, which still draws queues on weekends, has spawned eight branches from Shepherd’s Bush to Old Street. The standard of food at chains tends to drop as their branches proliferate though, so I was eager to see if that was the case here, especially as Busaba’s food was always ‘good for the price’ rather than just plain ‘good’ to begin with.

What’s in store at Store Street?

My first visit was to the Store Street branch just off Tottenham Court Road. As with all the other branches I’ve been to, the sophisticated-looking, dimly lit, dark wood-panelled interior looks like new with the smell of incense wafting through the air. The communal-style tables won’t suit everyone, but for the anti-social there are a couple of window-facing seats for couples and lone wolf diners. The Store Street location has a narrow private dining room downstairs. It’s for groups of around a dozen who can commit to a set group menu, but whether you think it’s cramped or cosy depends on your point of view.

I’m a big fan of pad thai noodles and I opted for the most expensive version, the sen chan pad thai. It commands a £1.70 premium over its counterparts due to the presence of green mango and crab meat. Sadly both of these ingredients were both meagre in quantity and quality, so there’s little point in ordering the sen chan pad thai for those little extras. The prawns were a little muted in flavour but the noodles are soft without being squidgy, mercifully non-greasy and have a zesty, citrusy flavour. Mix in the crushed nuts for a bit of texture and you have yourself some reasonably tasty noodles.

A bad case of crabs.

Sadly Busaba no longer has either grilled monkfish or swordfish on the menu, so I went for a monkfish curry instead to get my fish fix. The green coconut-based curry is creamy, but not excessively so, with a spicy, peppery heat that makes its presence felt but isn’t overpowering so it doesn’t drown out the coconut. Unfortunately the monkfish had been overcooked so it was far too soft and flavourless – cardinal sins when committed against the ‘poor man’s lobster’ – so it might as well have been any white fish. 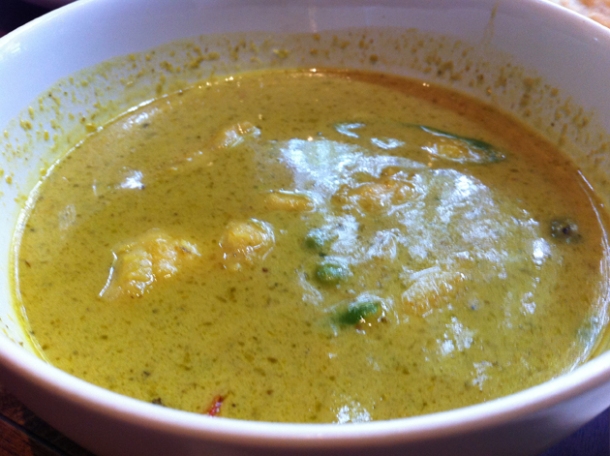 Console yourself by mopping up the tasty curry sauce with some Thai roti – a fried bread that’s crisper, fluffier and more substantial than the Indian bread of the same name. It’s a personal favourite of mine.

A roti in my mouth.

Unlike many restaurants, the selection of soft drinks at Busaba isn’t limited to the usual suspects of carbonated teeth enamel assassins. There’s an interesting variety of juices, smoothies and teas available. Many of them, such as the Guava Collins, tend to be made on the cheap though. The guava in this rather watery drink is definitely present, but the distinct, bold flavour of that fruit is greatly subdued here. 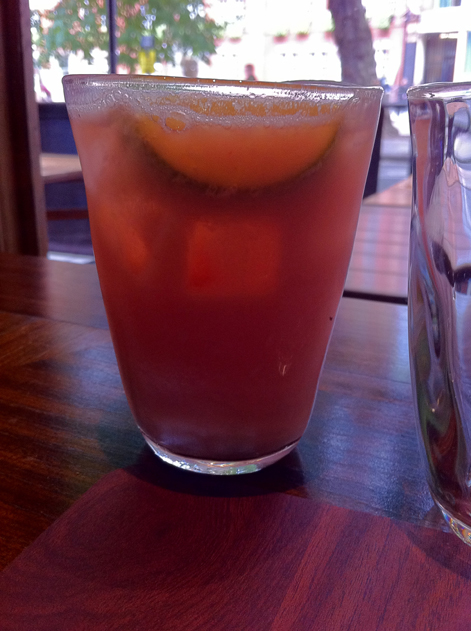 Who is this Collins anyway?

The Panton Street branch is one of the newer locations in the Busaba empire, just a stone’s throw away from the perennially-bustling Leicester Square so it’s noticeably larger than the Store Street branch. On this visit I was aided by the Euro Hedgie and Rodan.

Both the Hedgie and I are big fans of the coconut prawn, a prawn curry made with green peppercorn, coconut and lime leaf. Judging from Rodan’s gobbling squawks, it’s just as good as it ever was. Oddly, Rodan paired it with crab fried rice which has precious little crab in it – much like the supposedly crab-blessed sen chan pad thai.

You were probably expecting a photo of a steaming, yummy bowl of coconut prawn curry weren’t you? Tough.

My first experience of Thai food way back when was the classic tom yum gung – a spicy, sour prawn soup, red and orange in colour and served in Thai restaurants up and down the length of Britain. The closest thing you’ll get at Busaba is the tom yam talay, a noodle soup. The fragrant soup looks almost identical but with vermicelli noodles, prawns, squid and baby clams lurking in its depths.

The Hedgie enjoyed the fact that the prawns still had their heads attached so he could suck out the flavoursome brains, but otherwise seemed generally nonplussed by the dish. He was especially critical of the small, flavourless clams though.

There are some noodles in that soup. Somewhere.

I was in an uncharacteristically non-ravenous mood so I went for a lighter pairing of dishes. The grilled aubergine salad has some unusual bedfellows in the form of white fungus, shallots, mint leaf and chilli. The tart and spicy fish sauce-like brine added a lot of flavour. I’m unsure if the fungus is supposed to be devoid of flavour, but it was pleasingly soft, moist and slippery with an unusual but interestingly crumpled texture to it. Most of the aubergine chunks had lost their distinctive creamy taste though which was a disappointment. It’s stil a fun dish but not interesting enough that I’d rush to have it again.

A salad, but not as most of us know it.

An unusual sounding side dish is the pandan leaf-wrapped chicken. The pandan leaves hold the disparate chunks of chicken together while they’re cooked, but I’m not sure if they’re supposed to impart some sort of flavour or fragrance or aid chemically in the cooking process somehow. In any case the excessively chargrilled chunks of chicken are barely recognisable as poultry, although some of the chunks have a caramelised tinge to them. Dunk them in the pot of dark, sweet, surprisingly tangy soy sauce and they’re the culinary equivalent of a Michael Bay film – enjoyable as long as you’re not paying attention.

I was surprised to find Boyland cherry soda on the menu – I had last encountered this refreshing, fruity soft drink at Porchetta in New York. Well worth trying, especially if you like cherries and Cherry Coke as I do.

Has the standard of food dropped at Busaba Eathai? In a word: no. Some dishes have stayed the same, while others are no longer available but none in my experience are markedly worse.

A far better question to ask is whether it’s worth eating at Busaba at all and the answer is, as it has always been, a qualified yes. There are some gems to be found in the menu (which really needs some trimming and rejigging to highlight the best dishes) and, for the price, you could do far, far worse. As long as you keep your expectations in check and can navigate the menu then Busaba is a reliable fall-back option, especially when you need a quick bite. A hesitant four stars.

Total cost for one person including soft drink: approx. £15-20