Most business lunches are rather staid affairs full of talk about quarterly results and brand actualisation strategies, but one sure-fire way to spice it up a little is to have it at Archipelago, a smaller, rather unusual restaurant in Fitzrovia just around the corner from the BT Tower.

Archipelago is unusual since it has meats such as kangaroo, zebra, wildebeest and even a few insects on the menu. The interior appearance of the restaurant is just as remarkable, resembling an Asian antiques and bric-a-brac shop with paintings and random cultural artefacts hanging out of every nook and crevice. Service was friendly, warm and informative, although our waitress wasn’t quite as well informed about the coffees on offer as she was about the food.

Since this was a business lunch we all decided to share our starters which allowed me to sample a nice swath of the menu before moving on to my main course. First up was crocodile wrapped up in vine leaves. The old cliché about crocodile tasting like chicken is still true, although in this case it tastes like particularly tough, leathery chicken wrapped in equally tough vine leaves. Although the meat had a citrusy flavour which made up for this to a certain extent, the leaves didn’t taste of much. Since this is the second time I’ve had crocodile, I’m starting to think that there’s a good reason this meat isn’t more widely available in Britain – it’s not worth eating (although I’m open to having my mind changed).

What do you call a crocodile wrapped in vine leaves? I have no idea. What do you think I am? A comedian?

Despite its apparent simplicity the locust salad took a surprisingly long time to make it to our table and its appearance instantly created a palpable buzz. There’s no mistaking it for anything else either – it’s definitely a scattering (not a plague or even a swarm) of locusts on top of a salad of spinach and rocket. The spicy taste was almost certainly due to the piquant dressing, while the locusts themselves were crispy with an unexpectedly nutty, enjoyable moreish flavour. The effect is somewhere in between crispy soft shell crab and prawn shells.

Yup, those are locusts alright.

Next up was a comparatively more sedate and everyday dish – grilled unagi or eel. It’s a popular and common sight in Japanese restaurants. Here the meat and skin were very soft and oily with a slightly piquant flavour and was quite pleasant in its own right, but I prefer my unagi with a firmer texture and a crisper layer of skin. Not bad, but I wouldn’t order it again.

Another unadventurous starter, but more suitable for vegetarians, was the deep-fried beetroot ravioli in a pumpkin and pine nut sauce. Despite being deep-fried the outer skin was surprisingly chewy which wasn’t pleasant. The beetroot filling was suitably tangy, but had an unexpectedly pulpy, almost meat-like texture to it while the sauce was disappointingly bland. An interesting failure, but a failure nonetheless. 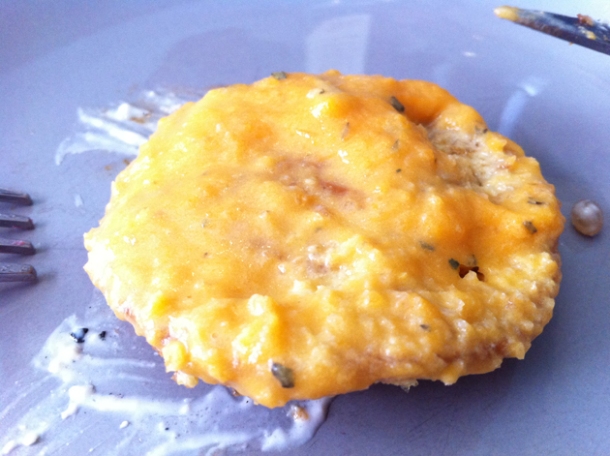 Objects in the photo may appear closer and larger than they actually are.

If you’re expecting a visual flourish from having zebra meat on a plate, then I’m afraid you’ll be disappointed – it looks just like any other red meat. The waitress warned me that it might be a little stringy, but that wasn’t the case in my experience. It was quite tough and coarse though, vaguely resembling pork in texture but tasting more like beef or venison which was enhanced by the port-based sauce. The accompaniment of Japanese soba noodles looked and tasted a little out of place, but it was quite refreshing and tasty in its own right with a zesty, grassy flavour that was quite unlike other soba noodles I’ve had. 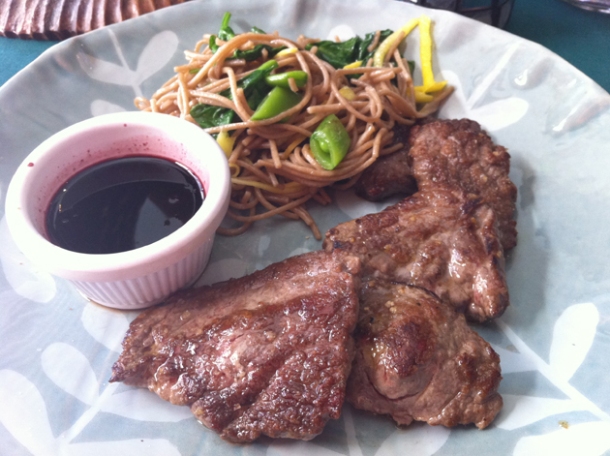 Sue-Ellen let out a squeal of dismay when she found out that I had a bee for dessert. I felt a little guilty about eating the bee after finding out about the trouble the world’s bee population is in, especially as the buzzy little fellow died in vain – he didn’t give me much gastronomic pleasure, with barely any taste of texture of his own. The bee at Archipelago was served on top of a piece of honeycomb alongside a buttery, wafter thin biscuit roll and a crème brulee which were altogether more successful.

The crème brulee was just creamy as I could’ve hoped and gently sweet too with a suitably crusty top. There’s much fun to be had by scooping it up with buttery biscuit roll. The honeycomb was actually made out of white chocolate with honey drizzled over the top, but both were decidedly run-of-the-mill varieties and nothing to write home about. The crème brulee and biscuit part of the dessert were good, but the white chocolate honeycomb felt tacked on and the bee seemed to be there as a conversation piece more than anything else. All-in-all, it didn’t quite come together as a coherent, well-rounded dessert.

This place does have a certain buzz about it.

I couldn’t leave Archipelago without trying the chocolate-dipped scorpion, egged on as I was by my lunching compatriots. The waitress warned that it was imperative to chew the tail to prevent the stinger from doing any damage as it made its way down my throat, so I was expecting an anthropod of monster proportions.

The little critter that turned up however was dwarfed by the slate it was resting on. The chocolate was dark and a little bitter, but otherwise unremarkable. Sadly, the same could also be said of the little scorpion – apart from a crispy, shell-like texture very similar to that of the locusts there’s little to be said for it. Anti-climactic.

All because the lady loves a chocolate-covered scorpion.

I washed it all down with a café de olla, a Mexican coffee advertised as having the taste of cinnamon and molasses. It was certainly dark with a nice kick, if a bit watery. It was naturally sweet without the aid of any extra sugar, but it wasn’t tangy as I would expect from a molasses-infused drink. The cinnamon flavour was certainly present, if only subtly so, lingering in the background.

That was one big vat of coffee.

Given the glowing accolades Archipelago had received from some of my office-based chums I was expecting something quite spectacular. Archipelago is certainly interesting and fun, but most of that comes from the novelty of the unusual ingredients and competing with your fellow diners to see who can eat the most outlandish meal. Sadly, the actual execution and quality of the actual dishes is merely satisfactory at best. As much as my sense of whimsy and fun wants to give Archipelago a glowing review saying that I’ll return frequently, it’s really far more likely I’d go somewhere else a little less eclectic but far more accomplished.

Total cost for one person including mineral water and coffee: approx. £50