The Euro Hedgie is even pickier than I am when it comes to restaurants, so when he declares that a restaurant is worth my attention then I usually heed his advice. La Tasquita de Enfrente in Madrid is one such eatery and I came away suitably awed.

La Tasquita de Enfrente (or LTDE as I’ll call it) is located on a rather dingy-looking side street just off the main thoroughfare of Gran Via. LTDE only has room for two, maybe three dozen covers at most making reservations essential. The decor is an odd mish-mash with shelves of bric-a-brac lining the small hallway leading to the dining room which is dominated by an exposed stone wall and some rather odd-looking paintings. It’s charming in a doddery sort of way. 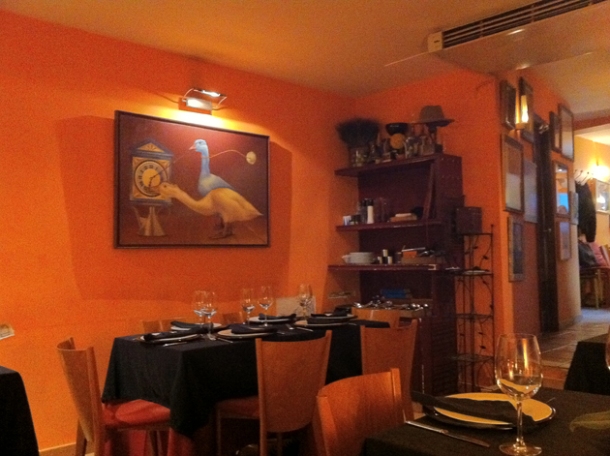 Just what are those ducks up to?

The staff, despite not speaking much English, were friendly and efficient (which stands in contrast to the efficient but terse service at many other Madrid restaurants). This included the chef-proprietor who haltingly explained that the menu changes daily depending on what was available at the market that day and was of sufficient quality. This means that if you decide to go yourself, you won’t necessarily get the same dishes I tried. I went for the tasting menu to get a good overview of the cooking at LTDE and to relive the both of us of having to communicate in languages neither of us were fluent in. 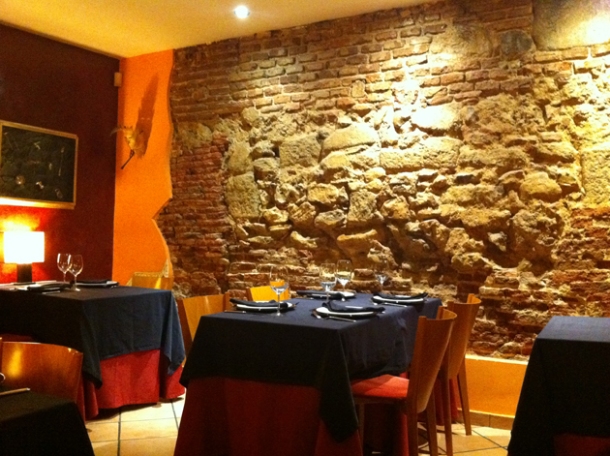 The first course was an unusual terrine made from carrot and what I think was beef. The tender meat was a little too soft and had lost much of its flavour, but the carrot added a touch of sweetness and a slight chewiness that made up for it to a certain extent. 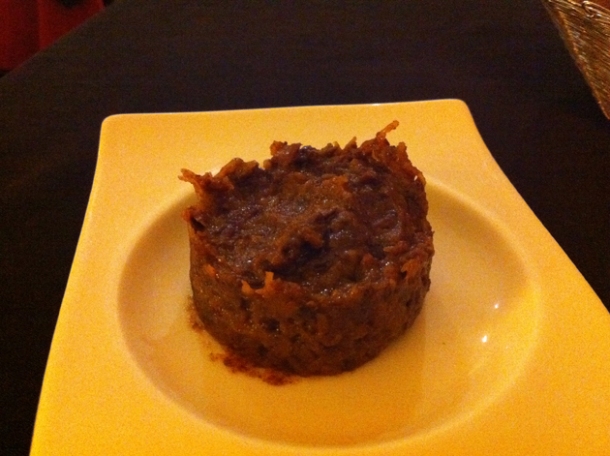 I was more than a little baffled by the second course – an egg, tuna and potato salad topped with cod roe. If this sounds like a recipe for blandness, then you’d be right because it is – only the oily cod roe tasted in anyway interesting. Despite my faith in the Euro Hedgie’s judgement, I was beginning to suspect that I had been duped based on the lacklustre quality of the first two courses. 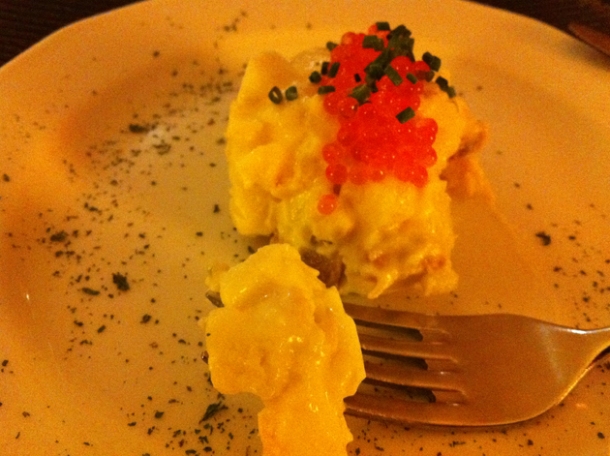 I needn’t of worried though. The disappointing first two courses were followed by a superb king prawn ceviche. The large, plump and juicy prawns soaked up the slightly spicy lime dressing and danced across my tongue. The accompaniment of chopped parlsey and red onion added a refreshing crunchy hit that rounded out the best ceviche I’ve had yet, whether in London or Madrid. 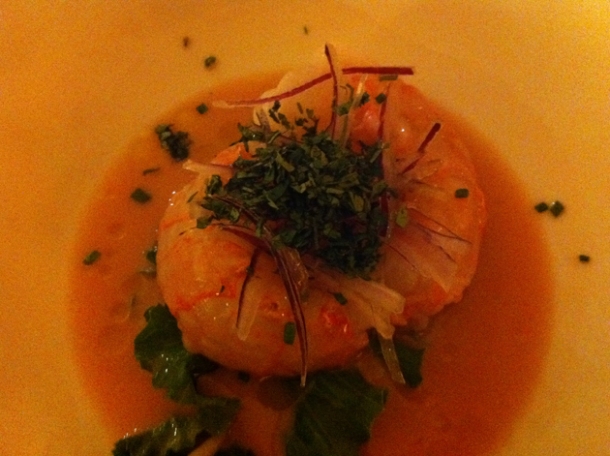 The third course of mussels were presented in a sardine tin rather than in shells as I was expecting, but I nonetheless found the whimsical presentation quite charming. The mussels tasted fresh and were doused in a Galician sauce which tasted like a mellow tomato-flavoured olive oil. 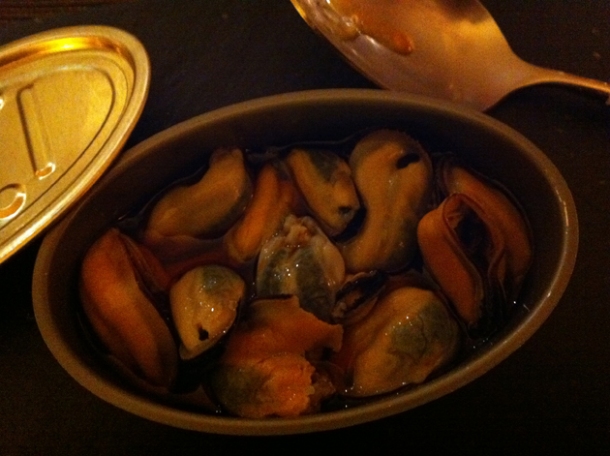 The sole vegetable-only course of the evening consisted of grilled asparagus, mange tout and mushrooms drizzled with sea salt. All of the vegetables were fresh and light, but the asparagus were especially notable. Despite having a firm bite, they weren’t at all tough or fibrous but had a smooth, slightly crisp texture instead. They seemed to be infused with a vaguely soy sauce/vinegar-like dressing which, combined with the sea salt, made the asparagus unnaturally moreish. 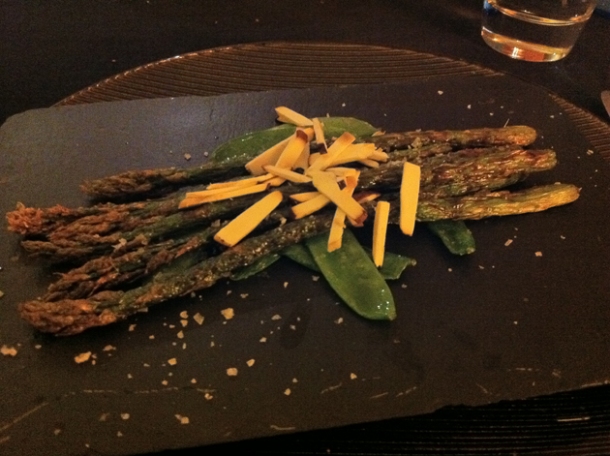 I wasn’t expecting to find stingray on the tasting menu, but I was nonetheless pleased by the smooth, glossy flesh and its slightly sweet, slightly sour flavour which was accentuated by the capers scattered on top. The accompanying potato half was surprisingly tart and I can’t quite decide if I like it or not. Still, a superb dish. 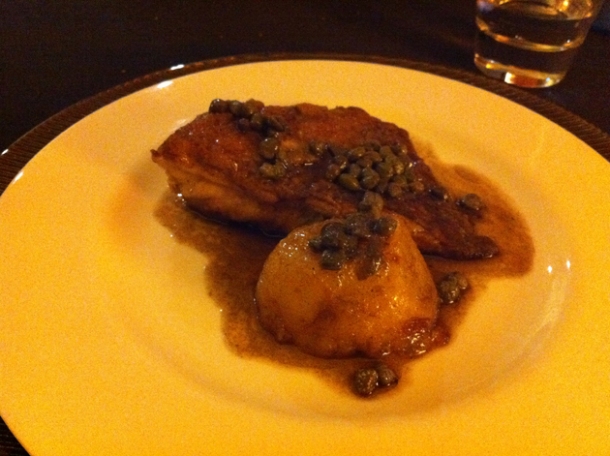 No Squelchie, stingrays are not cute.

Long-time followers of this blog will known that I’ve been on a quest to find a superb steak tartare in London and have yet to succeed. London’s restaurateurs could do far worse than follow LTDE’s example. The tender minced beef somehow managed to have a firm bite and a superb combination of creamy, sour and slightly spicy flavours that didn’t clash but mingled together beautifully. The accompanying roast potatoes were crispy on the outside and fluffy on the inside . The egg white was fried so it resembled an omelette, while the yolk was fried and perched over the beef but it wasn’t greasy and almost resembled a poached egg. It all comes together to make one of the best and most inventive steak tartares I’ve had in a long, long time. 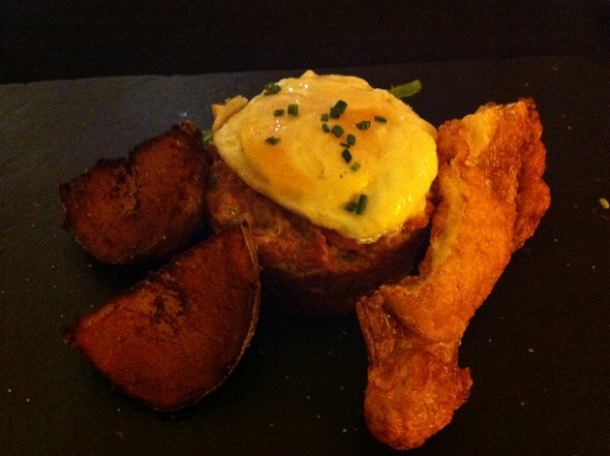 Yes, underneath all that is a superb steak tartare. Don’t believe me? 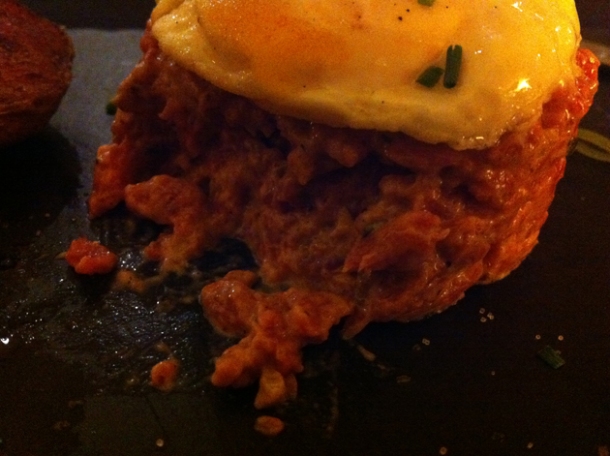 I was in the mood for dessert and at LTDE I got two. I wouldn’t normally choose tiramisu for myself since that classic Italian dessert is often done lazily or badly, but that wasn’t the case here. LTDE’s unusual looking version had a spongy biscuit base with a suitably boozy hit and a creamy, delicately sweet, foamy, mousse-like top. Taken together, it was not only a great dessert, but the best tiramisu I’ve had to date. 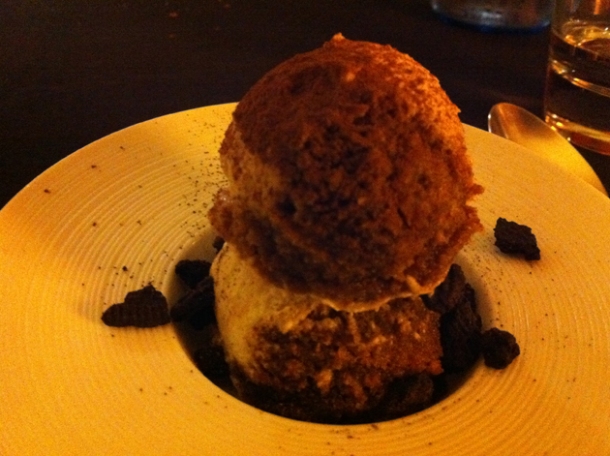 The second dessert consisted of a warm, delicately tangy and creamy pear custard that had an almost wispy, foamy texture. It was topped with a macron-like baked crust that added a much needed crunch balancing out a superb dessert. The perfect ending to an excellent meal. 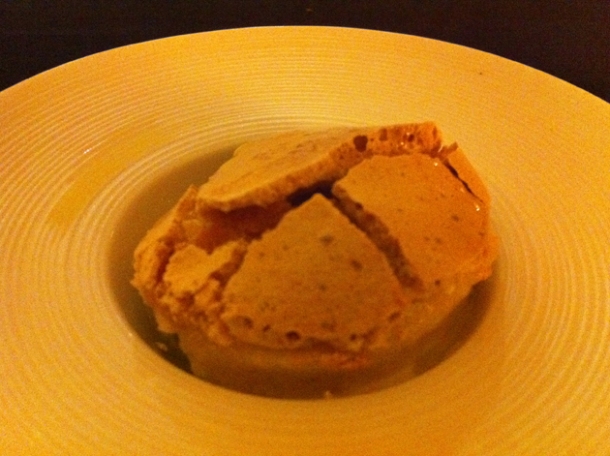 Despite a rocky start, the food at La Tasquita de Enfrente was generally excellent. Despite the high cost of the tasting menu, I can’t recommend this little gem highly enough. A wholehearted five stars.

Total cost of the tasting menu for one person including mineral water: approx. €73 (approx. £66)