Following my disappointing experience at Belgo’s June Lobsterfest, I was on the hunt for quality lobster at a low price in London. The Euro Hedgie pointed out that Chinatown is full of inexpensive seafood restaurants, so we popped along one weekday evening to the Lisle Street branch of Young Cheng. There are three Young Cheng restaurants all inexplicably within five minutes walk of each other, but we deliberately avoided the branch on Whitcomb Street which was overflowing with tourists due to the presence of an all-you-can eat buffet serving anglicised junk food. We chose Young Cheng for a very specific reason – their seemingly year-round but actually seasonal £20 lobster offer.

Even though the Lisle Street Young Cheng is split across two floors, it feels cramped with its small C-shaped dining rooms packed full of tables. It’s full of people from every walk of life making it a boisterous place that’s fine for the beginning to a night out, but not ideal for a quiet chat over some food. The service was surprisingly good for a cheap Chinatown restaurant – as well as the usual military-style efficiency, the staff were reasonably friendly and even cleared away our dishes when they became full of discarded lobster carapace and replaced them with fresh ones.

The lobster was baked in a ginger and spring onion sauce and served on a bed of egg noodles which had been gently boiled and then stir fried. Handily, the lobster carapace had been pre-cracked making flesh extraction, usually the hardest part of eating lobster, surprisingly easy although a finger bowl and lemon handwipes were still provided. The lobster meat was plump and moist, but relied greatly on the on the sauce for flavour so much so as to almost, but not quite, drown out the natural taste of the crustacean. Although not perfect, it was still far tastier than the dried out excuse for lobster I was served at Belgo. 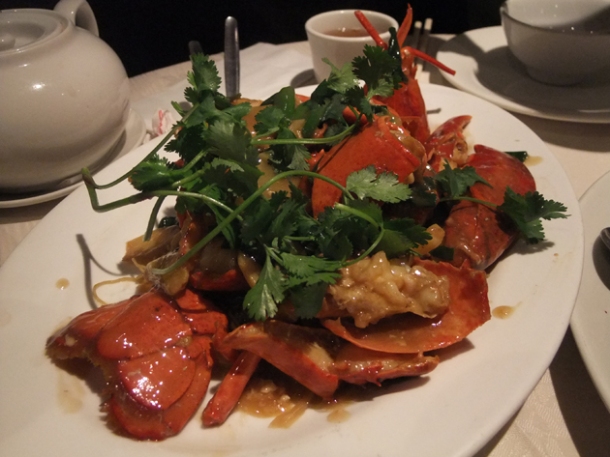 The Hedgie estimates the lobster weighs in at around 1.5 pounds which makes it around 50% heavier than the one pound lobsters Belgo traditionally uses. From observation the pricing of Young Cheng’s lobster deal can sometimes increase to around £25 depending on the time of year.

Since both the Hedgie and I are gluttons, neither of us were satiated by the lobster and noodles so we also ordered some roast duck with some boiled rice. Duck is usually a very fatty bird, but the duck here was surprisingly fat-free which made for some very clean tasting meat with no rivulets of fat dribbling down our chins. While the skin was taut and slightly waxy, it was also surprisingly bland. This disappointing lack of flavour also extended to the meat, but at least it was still juicy unlike the dry husks of duck served in so many other Chinese restaurants. 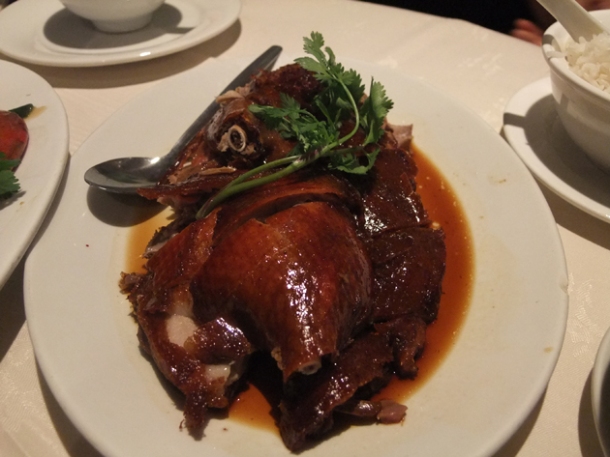 After all that the complimentary slices of orange were a welcome refreshment. Even cooler and more refreshing was the papaya bubble tea, a cold tea-based drink that originated in Taiwan. If there’s any tea in Young Cheng’s version then it’s well-hidden, but the papaya flavour is strong, distinctly sweet and goes well with the dark tapioca balls. The bubble tea was also surprisingly creamy, so much so that the drink almost resembled a frappé in its consistency. 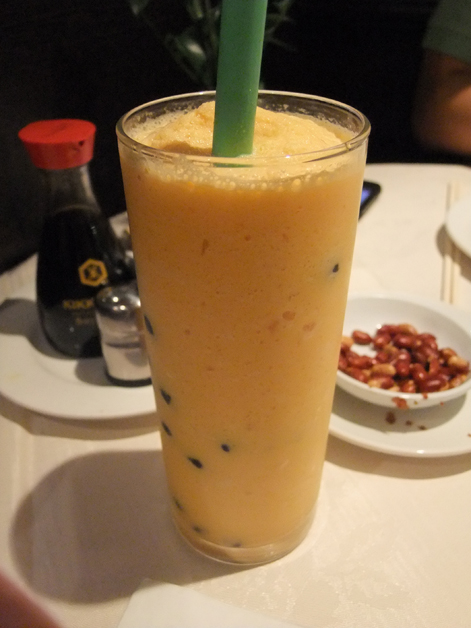 It really does taste of papaya.

Although the quality of its food is merely satisfactory rather than exemplary, I can’t be too harsh on Young Cheng given its low prices. For a cheap lobster dinner you could do far, far worse.

Reservations: yeah if you want.

Total cost for one person including soft drink based on two sharing: approx. £19