Jewish soul food reasserts itself in the East End

Jewish food doesn’t have much of a visible presence in London to the casual observer. But that’s before you realise that many dishes that we taken for granted in our everyday lives – from bagels and smoked salmon to hot salt beef – have their origins in the Ashkenazi Jewish communities of Eastern Europe, some of whom once made their homes in London’s East End.

Even so, it has been easier to find somewhere in London serving new-wave Jewish food a la Ottolenghi than it has been to find a well-crafted pastrami sandwich. That’s now changed with Monty’s Deli, a street food stall that has settled down and set up shop a stone’s throw away from Hoxton overground station.

This prime location means that booking ahead is needed if you want a table or a perch at the counter or bar – especially on or close to the weekend. This is a shame as Monty’s Deli feels like a place where you should just be able to rock up at any hour of the day and get some chow at the bar as if you were a noir-ish character from Nighthawks.

The fact that you can’t is probably due to the alluring decor at Monty’s which is just as winsome as its staff. Situated in what was once an East End butcher, the tiled walls and floor mesh beautifully with the plushness of the banquette-equipped booths. Inexplicably I don’t have any photos of the interior, but Cheese and Biscuits most certainly does. I have compiled copies of the menu though.

Although the service was slow, inefficient and somewhat haphazard across all of my visits, it is improving slowly but surely. Until it’s been fully blooded and broken in, don’t bank on a quick meal if you’re in a rush. That can accentuate another problem – the height of the stools at the counter and bar can prove to be tortuously uncomfortable if you’re a short arse like me.

My first meal at Monty’s Deli did not start auspiciously. The braised brisket might as well have been boiled to death. Although tender and moist, the tepid bovine flesh tasted as grey and lifeless as it looked. The large portion (brisket is a cheap cut after all) made the dreary blandness all the more unbearable – the squirt of mustard and tart, reasonably moreish onions did little to alleviate the tidal wave of fleshy, monotonous misery.

The cooking methods are obviously very different, but this braised brisket has absolutely nothing on a quality barbecued brisket such as the one from Texas Joe’s.

Although the pickles weren’t as accomplished their counterparts from the American South or Japan, the selection here still had much to recommend it with a mix of earthy, vinegary and musky sweet bites.

This review’s procrastination was brought to you by Eurovision.

Firm beans came in a tart, slightly smoky sauce. It won’t set the world of beans alight, but every little bit helps when it comes to compensating from the crime that was the brisket.

A hill of beans.

The New York Egg Cream was a bizarre drink. A mixture of what tasted like fizzy water, milk and chocolate sauce, the combined effect was little more than a thin and watery fizzy chocolate shake. Most unsatisfying.

I suppose it’s a bit like an ice cream float, but with even less charm.

The highlight of my first meal had to be the lokshen pudding, even though the vermicelli in this pasta-based dessert took the form of lasagna-style sheets rather than noodle-like threads. I don’t really consider that a flaw though – dense and buttery, it was akin to a weaponised bread and butter pudding topped with a sweet and crisp creme brulee-style crackling. Ace. Properly, utterly ace. 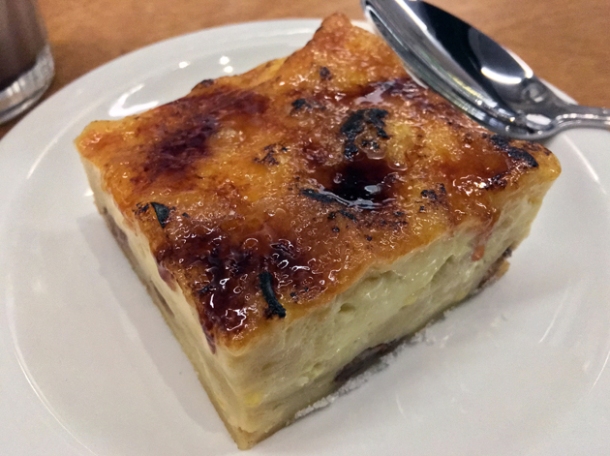 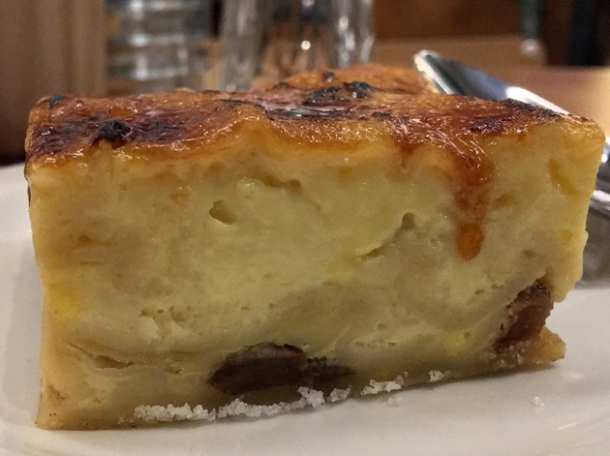 It has since disappeared off the menu. Please Monty, bring it back. Please.

Despite the generally unimpressive nature of my first meal at Monty’s, repeat visits were in order given the reputation that the market stall version of Monty’s had garnered and the fact that I hadn’t yet tried any of their bagels or sandwiches. The chicken soup was soothing and almost buttery, with a gentle sweetness and hits of dill. Sweet vegetable bits and doughy, malty, soft and slightly grainy matzo balls were more than just icing on the proverbial cake, but were integral to the warming comfort that this soup provided. 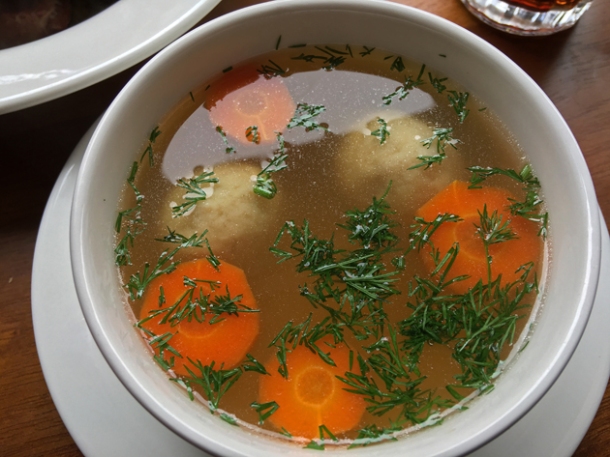 The beauty of the chicken soup made it all the harder to accept the reality of the malformed smoked salmon bagel. The bagel itself was a bit too hard and stodgy with not nearly enough chewy pliability in its circular form. Although not excessively oily like the vast majority of smoked salmon, the fish itself was still cold from the fridge and thus characterless. It was left to the sharp onions, tangy capers and whippy cream cheese to salvage some semblance of enjoyability from this dish.

Toasting the bagel, as it was with The Amazon’s pastrami-filled variant, only emphasised the subpar nature of the bagel rather than compensating for it. The beefiness of the hunk of pastrami in the middle was very satisfying and comforting, even though it wasn’t as smoky and peppery as I would’ve expected. 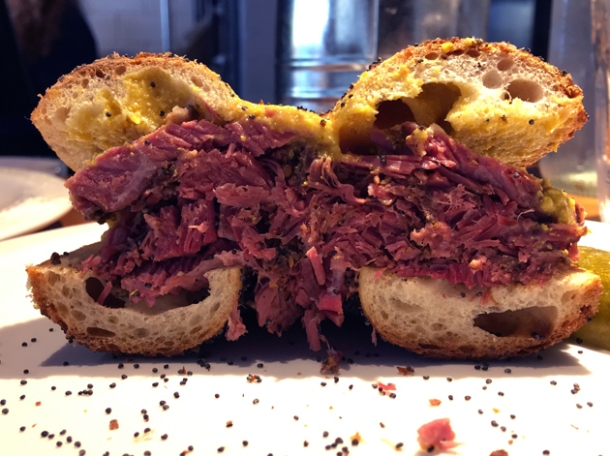 The poppy seed bagel probably didn’t do anything for my opiate test results.

The salt beef hash is only available at weekends for brunch, but it is worth ordering if you’re here at that time. The tender, moist and sinewy cubes of salted beef were moist, lightly tangy and satisfying. The fried egg could’ve been runnier and richer, but at least the peppers were sharp and sweet, adding variation, while cubed potatoes provided starchy bulk.

Only available for weekend brunch.

The challah French toast is another brunch-only dish. Sharp yet yielding apple pieces, crunchy walnuts, sweet apple sauce and refreshing yoghurt were all eminently pleasing, but the star of the show had to be the soft, fluffy and buttery toast. It could’ve done with a little more caramelisation and crusty crunch on top though.

Chopped liver may, in effect, be nothing more than a pate but pates, terrines, rilettes and other such meaty spreads are hard to get right. Monty’s chopped liver was an airy and creamy delight. It won’t dislodge Gorronnaises rilettes from my affections, but it’s certainly a tasty bit on the side when spread over crisp, toasted brioche-style bread.

Tart, sour and firm sauerkraut was pepped up further by the addition of fennel, dill and capers. That might be cheating, but I’ll allow such cheating when it produces a sauerkraut as superlative as this one. 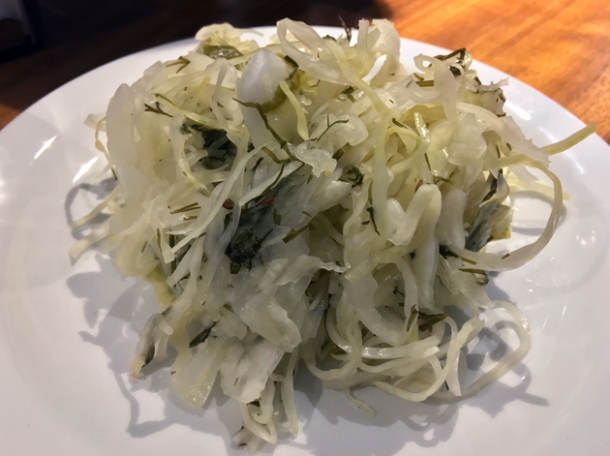 Bread is usually of overriding importance in a sandwich, but the carb sheathes in the Classic Special faded into the background. Although small, they were perfectly functional as a delivery mechanism for the filling – one half salt beef and one half pastrami, topped with coleslaw. As expected from the pastrami bagel, the reluctant smokiness and pepperiness of the pastrami meant that it struggled to stand out next to the salt beef. The two similar-ish preparations of beef thus blended together, but at least the combined effect was a winner – delightfully moist and tender with a gently beefy tang.

Coleslaw added a touch of creaminess and a little extra moisture.

A cookie topped with ice cream wasn’t a bad dessert, but it was somewhat anticlimactic after the chopped liver and Classic Special. A cookie, soft enough to be pliable, was topped with a smooth ice cream free of crunchy ice crystals. Fine but forgettable.

It’s worth noting that Monty’s Deli offers a range of pastries and baked goods for take away (including the bagels of course). The selection and number can vary, but one undoubted star has to be the brownie. The actual taste of chocolate was muted, but that didn’t really matter given the superlative texture. Gooey and chewy with an occasional salty hint, it was a true delight. Only Paul A Young‘s similarly textured brownie is better in my books. 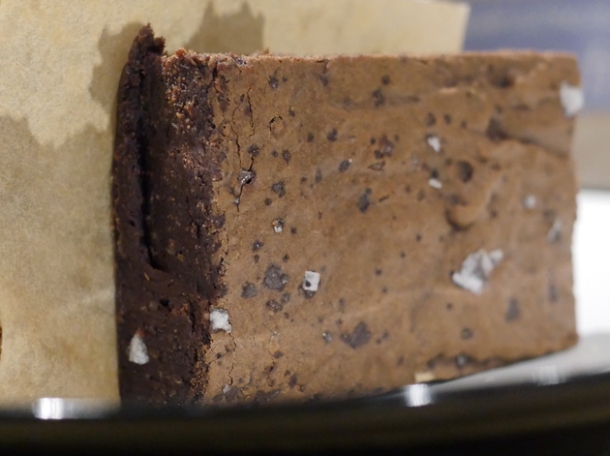 If they don’t bake all this stuff in-house, then they have a very good supplier.

Coconut macaroons were moist, dense and coarse with the distinct taste of dessicated coconut. Small croissant-shaped rugelach were soft and had the warmth of cinnamon along with the crunch of brown sugar. 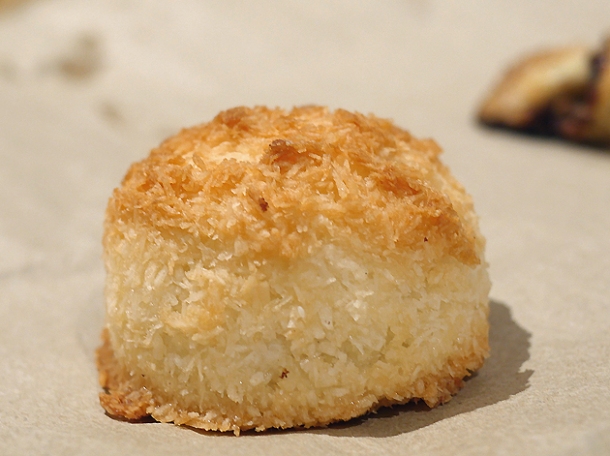 Next to a macaroon for scale.

If I were a stereotypical Instagrammer and only judged things by how they looked, then the babka would get uncritical praise laden with emojis, OMGs and exclamation marks. It does look swell and was certainly dense and buttery, but the non-existent flavour profile of the chocolate combined with the sheer size of the thing makes this a monotonous eat rather than a joyous one. 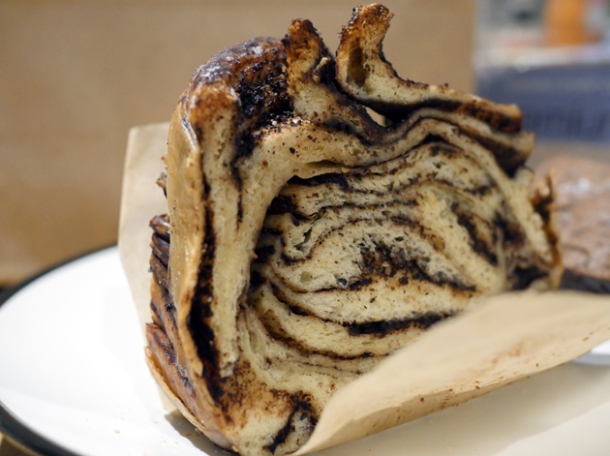 Go forth and enjoy

The smoked salmon bagel from my brunch with The Amazon may have been a disappointment, but a second attempt was generally much better. The smoked salmon, thankfully served at room temperature this time, was smooth, gently smoky and wasn’t slick with excessive oiliness. Its subtle qualities were easily lost amidst all the sharp onions, umami tomatoes, parsley and tangy capers, but the deconstructed DIY nature of this bagel means you can dial back these garnishes to focus on the salmon if you so wish. Although the bagel itself was a tad softer and chewier than before, it was still too hard and stodgy for my liking. 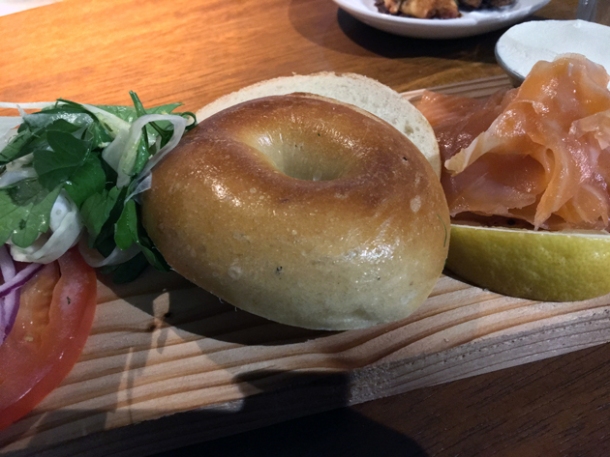 Serving food on chopping boards should really be put on the chopping block.

Crunchy noodle-like threads of potato formed the exterior of the latkes, while softer, moister strands made up the inside. Although there was a hint of tartness to the interior, it was ultimately a charmlessly heavy and one-note affair. Not even cream cheese and apple sauce on the side was enough to win me over. 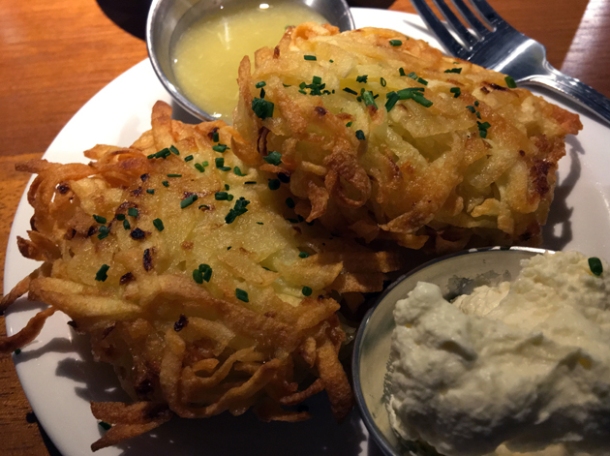 I felt compelled to give the brisket another chance, this time stuffed into a sandwich. The buttery-tasting slices of bread were capable holders that didn’t bend under the weight of all the brisket. Sadly, it was essentially unchanged from its bigger, breadless form. The lifeless meat was made much more bearable though by the far smaller portion size.

A slice of pickle to give you some idea of size.

Blintzes reminded me of school lunch puddings, but in a good way. Soft, thin yet sturdy rolled buckwheat pancakes were filled with cream cheese and doused in a sour cherry sauce. The sourness with hint of sweetness was emphasised by the helping of stewed cherries. Soft, creamy and sweet – if I had to regress back to childhood then I’d choose to do so by ingesting this hearty, warming pud. 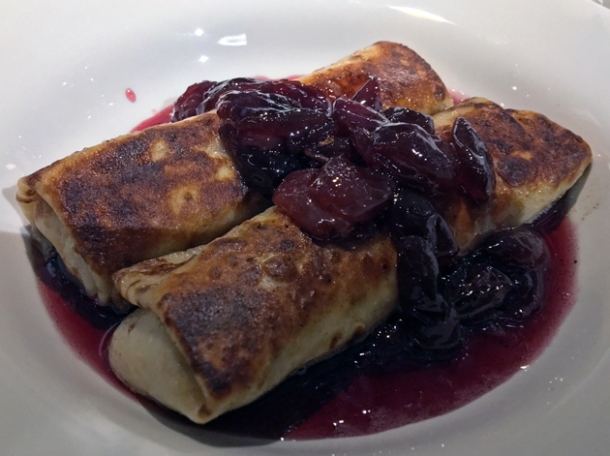 Monty’s Deli is, in hind sight, far better than the now-closed Mishkin‘s ever was, but there’s still plenty of room for improvement from the quality of the bagels to the distinctiveness of the pastrami. Despite all this, never mind the sluggish service and problematic stools, there would have to be something deeply wrong with you if you didn’t want to eat at Monty’s Deli. The soothing, tension-relieving warmth of classics like the chicken soup, salt beef and the pastries aren’t just satisfying comfort food dishes. They’re a reassuring bite that don’t half-heartedly ape tacos or ramen, but instead hark back to an almost forgotten era of our city’s history when Jewish food was far easier to find in the East End. I am cheering for Monty’s to get better, because we need what they’re selling.

Reservations: essential on and around weekends. Otherwise, highly recommended.

Average cost for one, including soft drinks: £25-28 approx.