The immediate area around Centre Point used to be a small hub of Korean restaurants until the Crossrail building works put the kibosh on that serendipitous gaggle of eateries. That’s left the banner for cheap Korean food in Soho-Fitzrovia-Bloomsbury (ish) to be picked up by Bibimbap, a mini chain of Korean restaurants that’s seemingly appeared out of nowhere. I say ‘seemingly’ quite deliberately, as this three branch operation seems to be run by the same people behind Asadal and SuperStar. That actually makes sense – an already successful and moneyed restaurant fiefdom is more likely to afford the high Soho rents than a plucky upstart.

All of the Bibimbap restaurants are fast, very casual and cheap restaurants with counter seating for lone eagles as well as takeaway service for most of their dishes.

Starters and side dishes at Bibimbap Soho and Charlotte Street

The unimaginatively named Bibimbap may concentrate on, well, bibimbaps, but no Korean meal worth its name would be complete with kimchi. Disappointingly then, Bibimbap’s version was excessively chilled and only mildly tart, sour and spicy. It’s not inedible, but I expected better.

A second helping of kimchi on another visit was thankfully served at room temperature, but it was still a mediocre affair with muted tartness and spiciness.

The tame kimchi explained the underwhelming nature of the kimchi pancake. Although fluffy and free of excess oil, the kimchi was barely detectable.

The seafood-filled pancake was a bit too oily and not as fluffy and elastically tearable as the kimchi-filled version. It did at least have a reasonably evocative tang of the sea from the scraps of squid, mussels and cockles stuffed inside. 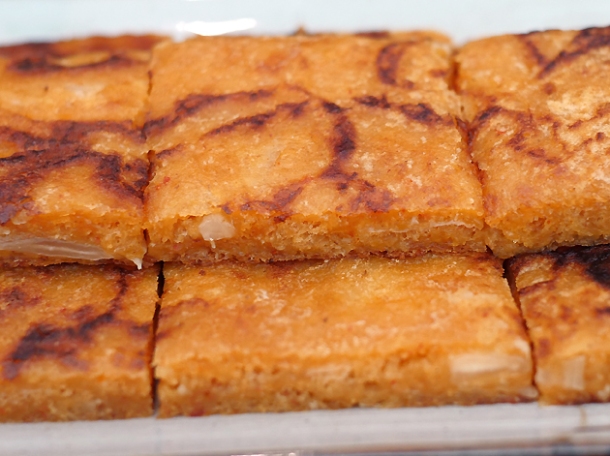 Flat in the pan.

Jap chae noodles tasted heavily of sesame seed oil, although I think that’s a good thing as I’m a fan of that seasoning. The sweet potato noodles themselves were not only a bit too heavy, but also so piping hot that they needed more resting time. The assorted vegetables were crisp, but ultimately forgettable. This wasn’t a bad jap chae, but it wasn’t a very impressive one either. 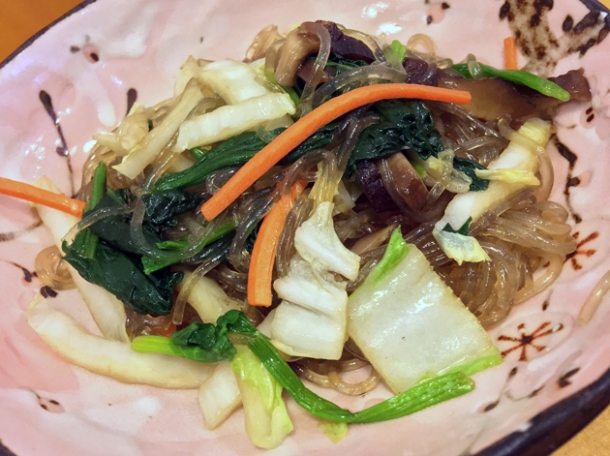 My favourite starter/side dish had to the rice cakes though. The soft, delicate and gelatinous texture won’t be to everyone’s liking, but it’s really a matter of context – think of them as mildly exotic gnocchi and you’ll likely get along with them just fine. The thickened kimchi-esque sweet and sour sauce was a predictable accompaniment, but decent enough.

Although you can have a large tottering pile of fried chicken as a main, I preferred to have it as a starter/side. Although the coating didn’t come anywhere close to the crispiness and unctuousness of the best chicken karaage (the best examples of which have easily outclassed the Korean-labelled competitors I’ve had to date), the oddly taut and slippery batter was pleasing enough on its own terms. The tender and unctuous chunks of chook underneath could’ve done with less chin-staining grease, but were otherwise satisfying.

Yes, it came in a metal bucket.

A bibimbap is a bowl of rice topped with various vegetables along with perhaps meat and/or egg. The entire thing is then mixed together and eaten. The versions at Bibimbap are all dol sot bibimbaps, which means the food is served in a blazing hot stone bowl which cooks everything inside it. Almost all use the same basic selection of vegetables – cucumber, mooli, daikon radish, bean sprouts, carrots, spinach and an optional fried egg. It’s a crisp and light selection that’s already filling in of itself when combined with the fluffy rice. There’s not much mooli though with the bitter spinach and rich, runny egg the dominant components.

There are several embellishments you can add to the dol sot bibimbap, many of them vegetarian. Sweet and briny tofu strips was one of my personal favourites. The mushroom variant was a bit scanty, consisting mostly of sweet and earthy shiitake as well as a meagre amount of black fungus. 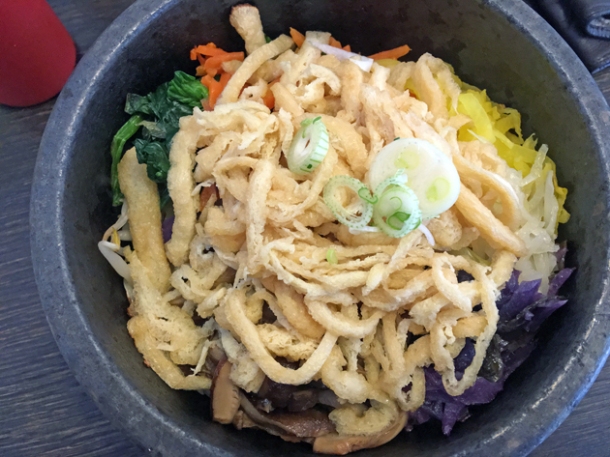 There’s not mush room inside my baps.

One of the few bibimbaps to strike out on its own with a unique base was the oddly named Nutritious. Wicket found the selection of dates, goji berries, chestnut and ginko to be neither too crunchy nor too soft. A hint of pickling didn’t upset the gentle, undemanding balance of clean flavours. 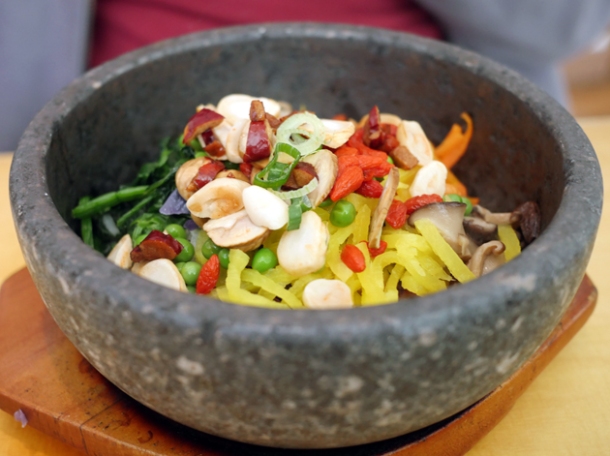 What an odd name – does it imply that everything else isn’t nutritious?

If you’re in the mood for a meaty bibimbap, then you shouldn’t be surprised to see that cheap and rather dour, uncheerful bits of meat are the order of the day. The barely marinated bovine slices sitting atop the beef bulogogi bibimbap were lightly earthy at best; at worst they tasted as grey as the stone bowls they’re served in. At least the assorted vegetables were tart and crisp.

The steak bibimbap was little better, with a few strips of anonymous beef thrown in. At least stirring and watching the raw strips of beef cook inside the hot dol sot stone bowl was amusing. With the steak taking the day off, it was left to the taut and earthy mushrooms and sauerkraut-esque preserved cabbage to prevent this bibimbap from becoming a total loss.

No actual bibs were harmed in the making of this review.

The stir-fried soupless noodles aren’t really worth bothering with – lifeless and dull chow mein-style wheat flour noodles did at least have a mild hint of seaside saltiness from its seafood toppings, but this faded quickly. A muted selection of small octopi, shrimp, mussels and squid along with a medley of firm vegetables failed to leave much of an impression. I’ve always thought that cheap seafood dishes should embrace their low cost nature, rather than pretend to be a more expensive dish – cockles, whelks and herring (for example) may not be very Korean, but I’d bet they’d make for a more satisfying eat.

London’s recent ramen revolution appears to have passed Bibimbap by, with the chicken ramen resembling a by-the-numbers bowl of instant noodles rather than a dish crafted and honed through care and practice. The one-note spiciness of the bright red soup didn’t impress, but the wrinkly, malty noodles and small flecks of surprisingly dense and almost gamey dark chicken meat were surprisingly pleasing – as long as you keep any ramen-ya inspired expectations in check. 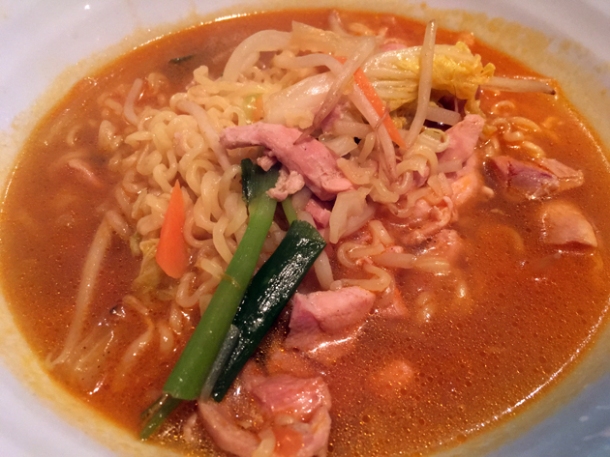 Tantamount to a tepid tantanmen.

Bibimbap is one of those rare restaurants where you’re generally better off as a vegetarian rather than as a meat eater. Even then, Bibimbap is remarkable more for its low prices, handy locations and late-ish hours rather than its cooking where it’s merely okay. That sounds like I’m damning this mini-chain with faint praise, but all Londoners need a place for a filling feed that’s cheap and reliable at the end of a long, hard day. For me, that’s Bibimbap. If what you really want is Korean food that actually tickles your senses, then New Malden and its choice of eateries is still the place to head to.

What to skip: Fried noodles

Reservations: only accepted for groups of five or more at the Charlotte Street branch

Average cost for one person including soft drinks: £20-25 approx.