Britain’s continuing love affair with the US manifests itself in our culture in many ways, not least in the number of barbecue and burger restaurants springing up across the capital. The cuisine of America’s southern neighbour has been far more neglected though – far fewer new Mexican restaurants have opened in the years since my massive taco and burrito group test. This is a real shame, as it means there’s been less progress in improving the quality of London’s Mexican food. Until now.

Santo Remedio is a small Shoreditch restaurant that has taken over the former premises of the now sadly defunct Mamita Que Chorizo. Unlike many of the other Mexican eateries in London, Santo Remedio not only manages to eschew decorative chintz but also has service, that’s both welcoming and efficient.

The real star of Santo Remedio, though, is the food. Its deceptively short menu hides some real gems.

The upstairs is for drinking and tacos only, but if you ask very, very nicely, then the kindly staff may let you eat bigger dishes up here.

If there’s one dish that will both set Santo Remedio apart from its competitors and simultaneously put off a lot of potential customers, then it’s the grasshopper guacamole. That might sound gimmicky, but grasshoppers are a very traditional Oaxacan snack – although they’re not a national favourite either. During my all too brief trip to the south of Mexico, more than one tourist from the north of the country politely grimaced as they turned down my offer of a gnarly little grasshopper. 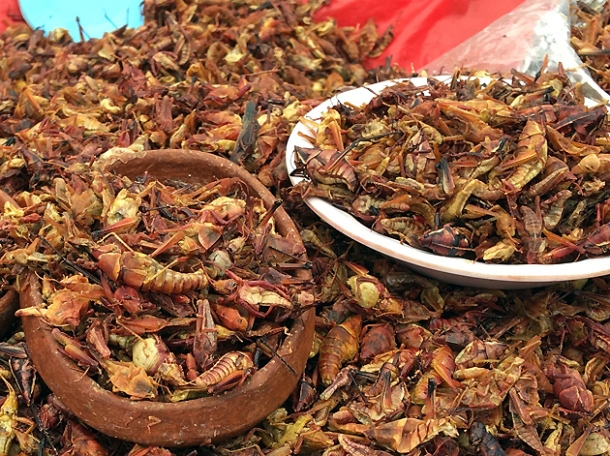 Grasshoppers for sale in a Oaxacan market.

The guacamole itself was chunky, creamy and lightly zesty – a far cry from the limp guacamole often available elsewhere. It wasn’t cloying, overly buttery or watery. The grasshoppers only added a little crispy nuttiness though – they weren’t as crisp, moreish or spicy as the ones I had in Oaxaca.

A far better Oaxacan-style dish was the chicken wings. The meat itself may have been meagre and unimpressive, but that didn’t really matter as it served as a conveyor for the dark, richly nutty mole. Although it’s not quite as layered and complex as some of the moles I had in Mexico, it’s not too far off.

The tortillas used in the pork tacos were thick but surprisingly bland. I’m willing to overlook this deficiency though. Not only because the tortillas improved upon subsequent visits, but because of the brilliantly executed pork. Firm, meaty strands had a deep fruity undertone and moreish edge. Simple in construction yet boldly flavoured, layered and complex – this is the standard of taco that I spent so much time, calories and money searching for.

As good as they were, the pork tacos turned out to be the warm-up act for the octopus main. The firm tentacle had a subtle bittersweet undertone. One part spice and one part chocolate, it was exquisitely complex and satisfying. It was so dreamy, I nearly dry-humped the chef in gratitude.

A side of black beans were firm, but nonetheless soft enough to be yielding to the bite. A moreish undertone was perhaps a bit too strident to truly compliment the more nuanced octopus, but it was still enjoyable. 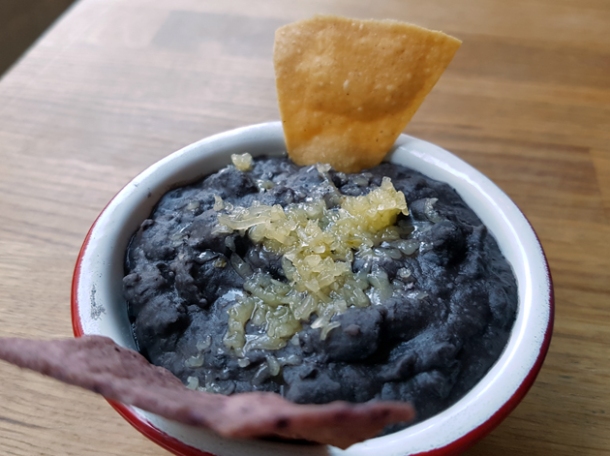 The tortillas were a bit meh, but I guess you can’t have it all.

There’s only one dessert at Santo Remedio – churros. The fried doughnut sticks arrived far too hot, needing more resting time. While they were evenly crisp on the outside, they were wispy on the inside rather than soft and fluffy. At least the dulche de leche dipping sauce actually tasted of caramel, rather than the one-dimensional cloying sweetness you would get elsewhere. 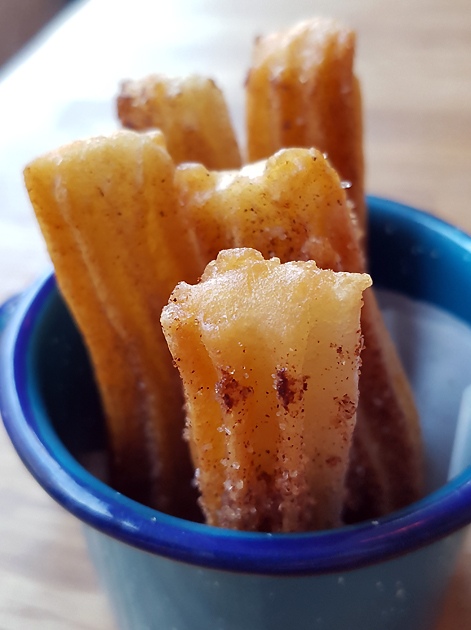 This week’s procrastination was brought to you, in part, by Scrabble.

My non-alcoholic drink of choice at Santo Remedio has to be the tamarind juice. Syrup-like in its sweetness, yet not at all viscous or cloying, it was eminently refreshing. 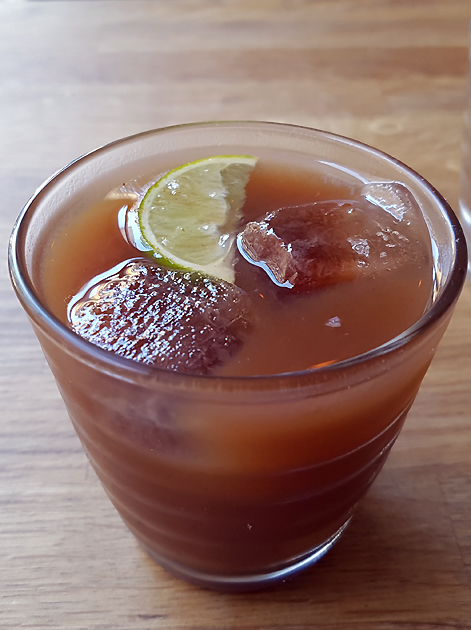 The remedy for what ails you.

Better quality tortillas graced the chicken tacos – thick and fluffy with a gentle nuttiness, they set the standard for all corn flour tortillas everywhere. The chicken filling was very similar to the pork, but none the worse off for it – meaty, moist strands with a fruity, orange-esque edge. 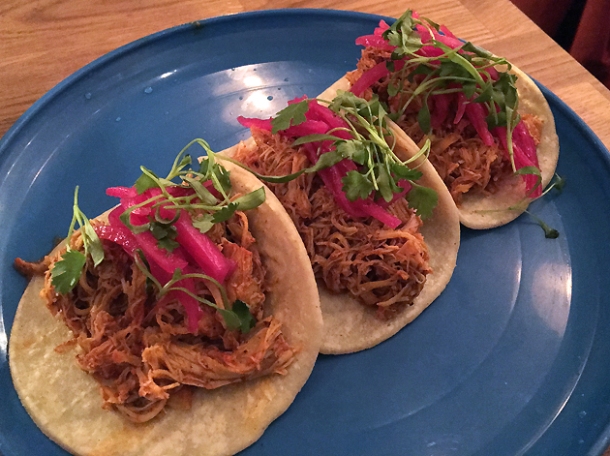 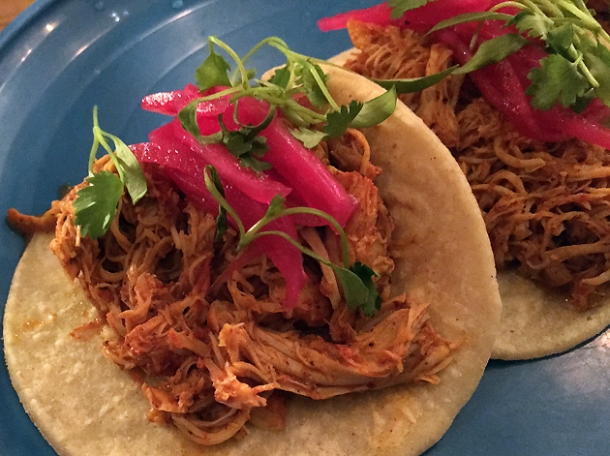 Birds of a feather.

Chunky yet soft potatoes came dressed in the same rich mole that graced the chicken wings.

It’s a small kitchen. Think of it as judicious reuse of common elements. Or a vegetarian alternative to the chicken wings.

Meaty ox tongue had a yielding, yet gently springy texture. It was even better when generously coated in the accompanying peanut-based sauce, its coarse texture and sweet nuttiness proved to be profoundly complimentary.

The churros was better rested this time. The dulche de leche was just as good as it was before, while the exterior of the churros was just as well executed. The interior still wasn’t as soft and fluffy as I would’ve liked though. 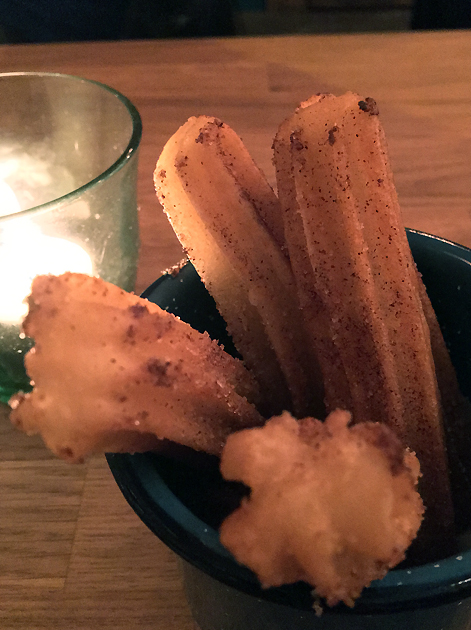 I chu chu choose you.

Cactus tacos used the same high quality tortillas that grace the pork tacos. The tender texture of the gently sweet cactus pieces, with a texture lying somewhere in between pepper and melon, was jointed by lightly earthy melted cheese, a few chunks of starchy potato and a garnish of corn. Although not the best cactus tacos I’ve ever had, they’re still a fine rendition and a good vegetarian respite in an otherwise meat-heavy menu.

I’m just a big softie underneath my prickly demeanour.

The cactus tacos were outshone by the special of pig ear tacos. Unctuously moist and meaty rind-like bits of ear were neatly offset by sharp red onions and citrusy relish. These tacos are not only among the best I’ve ever had in this country, they’re also a classier and more approachable version of the somewhat similar pig ear pancakes available at Shotgun.

Cactus turned up again in the coleslaw, with a smoky, lightly creamy and zesty sharp dressing. Its layered taste set this side dish apart from all their other mundane coleslaws I’ve ever had.

A special of lamb cutlets saw the chops cooked rare, so the flesh was tender with a bit of chew. This contrasted neatly with the crisp crust which had been lightly seasoned and blessed with a moreish rub. Although it’s not the best lamb dish I’ve ever come across, it’s a highly accomplished one nonetheless. 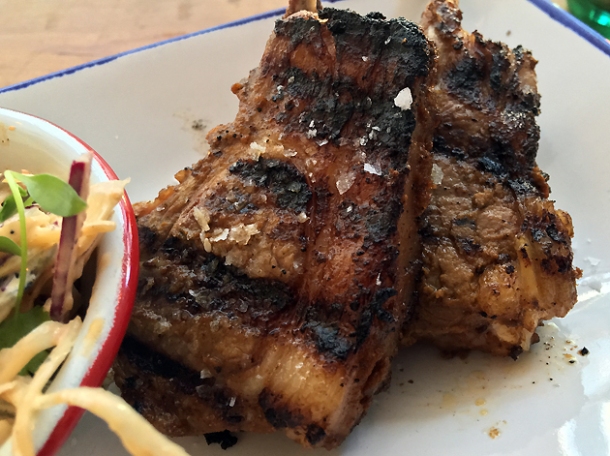 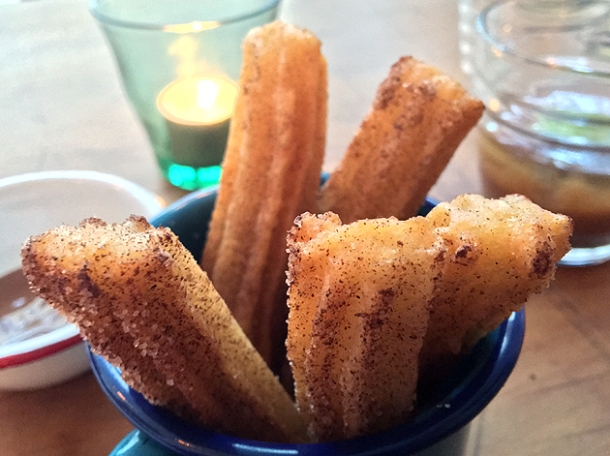 I dough nut know why I like churros so much.

I’ve never been a huge fan of quesadillas and the special of hibiscus quesadilla did little to change this opinion. Stiff tortillas were filled with melted cheese that was moderately creamy and elastic, while the hibiscus provided a mild herby earthiness. It wasn’t bad, just a little too subtle for its own good.

Not all specials are all that special.

A far better starter was the elote – sweet and tender corn on the cob with a mild spicy and smoky muskiness from its spiced cheese topping.

Some say my captions are cheesy or corny. This one is both.

The moist strands of meat in the beef tacos had the distinction of actually tasting of beef. The hearty, moderately smoky beefiness was neatly offset by the crisp and lightly spiced relish.

There are roses in between my thighs.

The roasted vegetable salad felt more like the autumnal accompaniment to a Sunday roast, but with the meat replaced by more vegetables. The big portion consisted of some beetroot, butternut squash, cauliflower and red onions, but predominately carrots. Textures ranged from firm to crunchy then tender. The sheer size of it made for a rather dull chew, especially as there wasn’t enough of the tahini-like pumpkin seed sauce to go around. It was by far the most distinctive element here, so its meagreness undermined this heap of cheap vegetables.

A big heap of vegetables does not make a salad.

There was no improvement in the churros, but there was also no regression either. I can live with that.

Dude, it’s getting hard to come up with new churros-related captions.

Other reviews have emphasised the authenticity of Santo Remedio’s dishes, but I think that’s missing the real point. The small but generally adept kitchen has managed to capture the deft lightness of touch and complex layering of bold flavours that characterises the very best Mexican cooking – characteristics so often missing from London’s other Mexican restaurants.

Santo Remedio isn’t perfect, but it is good. Very good. It serves the best Mexican food I’ve had outside of Mexico thus far. If anyone else tells you otherwise, then slap them hard before hurrying down to Shoreditch.

What to avoid: Roasted vegetable salad

Reservations: only accepted for groups of five to ten people – if you can get this many people together then reservations are essential.

Average cost for one person including soft drinks and service charge: £35-40 approx.

9 thoughts on “Santo Remedio review – the best Mexican in London”