Alsace Islington brasserie on the green

Britain’s long relationship with France has been a fraught and tangled one, to say the least. Thankfully that hasn’t stopped a surge of new French restaurants opening in London over the past couple of years. Bellanger, from the people behind Brasserie Zedel and The Delaunay, focusses on cuisine from Alsace-Lorraine. This region of France has alternated between French and German control many times over its history, resulting in food that’s a unique combination of Gallic and Teutonic.

Given the sprawling restaurant empire of Bellanger’s parent company, it would’ve been so easy for Bellanger to be a timid shadow of its continental counterparts – a needless replica of the dreary Côte, a branch of which sits immediately next door. Thankfully, that’s not the case at all.

The premises have a surprisingly airy feel, despite the acres of attractive brass and wood panelling used in the decor. Although some serving staff were surprisingly mute, the front of house was, on the whole, highly efficient and polite. Then there’s the food.

Bread is often an afterthought at so many restaurants, but not at Bellanger. A crunchy crust with just the right amount of bite and a soft interior with a bit of chew, all neatly balanced out by a lightly salted butter the colour of a pale moon. A simple and constant highlight of all my meals at Bellanger.

The clientele ranges from mostly hushed and middle aged mid-week to decidedly younger and drunker closer to the weekend. But not obnoxiously drunk, thankfully.

The raw egg didn’t add much richness to Bellanger’s steak tartare, while the slight chewiness of the beef and the punch of the capers only really showed themselves close to the end. When they did though, this somewhat uneven steak tartare became very enjoyable indeed. 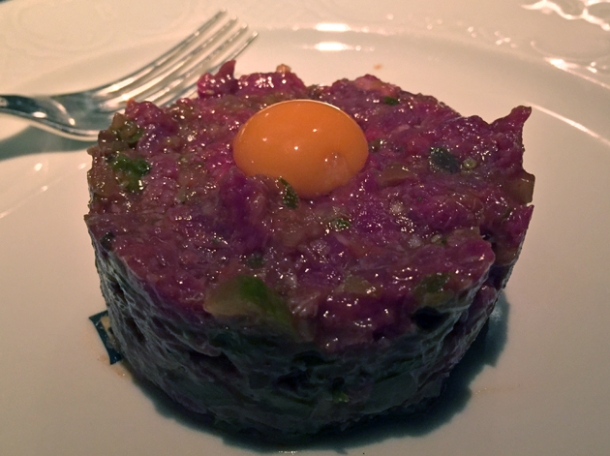 Tarte flambées are classic Alsatian dishes and are available in a choice of savoury and sweet varieties at Bellanger. A very thin and lightly crisp bread base topped with smoky and fatty lardons and tart sauerkraut was a visceral and sensuously unhealthy delight. 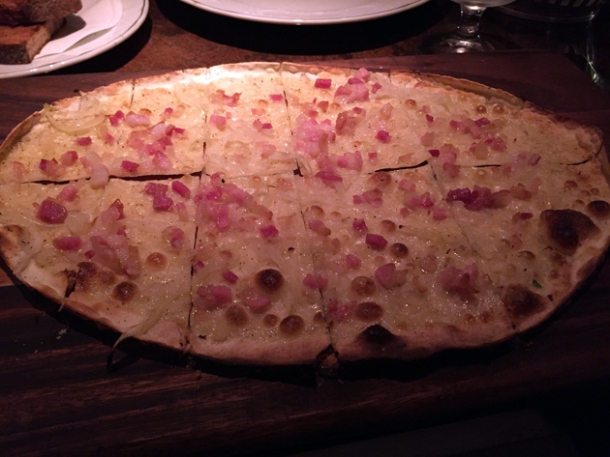 Call them ‘French pizzas’ and I’ll slap you.

The Choucroute à l’Alsacienne may ‘just’ be a pile of pork products in a pot, but who gives a fig when it tastes this good. Dense, tender and lightly flaky ham hock. Smooth and light sausage. Fatty and heavy sausage. Lightly smoky pork belly that was so fatty and salty, it reminded me of Austrian speck. All with lashings of sauerkraut and thinly sliced potatoes. The only member of the band not pulling its weight was the tame frankfurter. 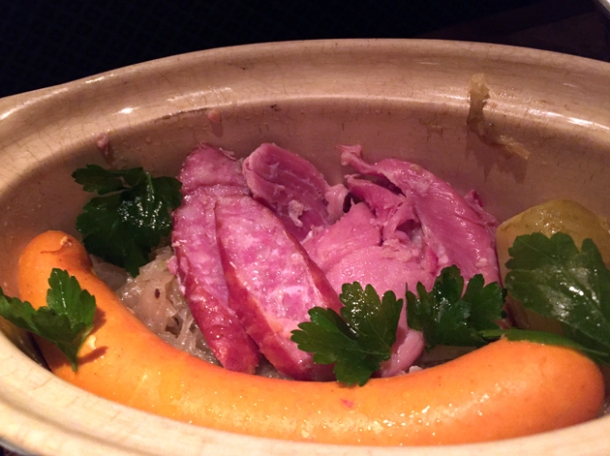 The butter-roasted chunks of apple on my dessert tarte flambée had the colour of quince and almost tasted like quince with a mild tartness. It went well with the lashings of light soured cream and the unmistakable, but not overwhelmingly boozy presence of calvados. Bonza. 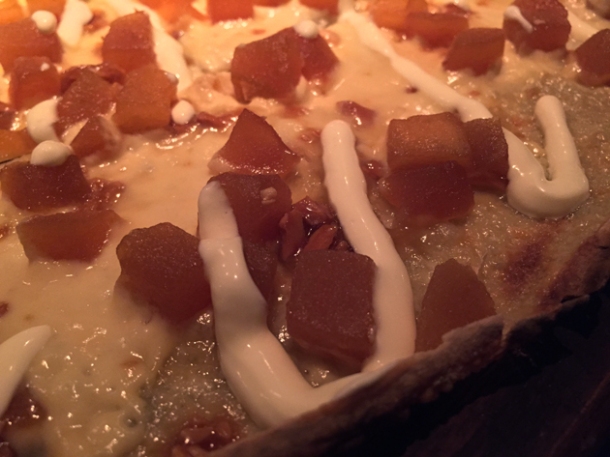 Such a thing would be utterly redonk.

I once remarked on Twitter than quiches were like ‘a shit cross between an omelette and a pizza’ – or words to that effect. That was before I had the quiche lorraine at Bellanger. A wispy yet somehow creamy cheese custard studded with fatty bits of salty pork and sweet caramelised onions, all served in a thin yet lightly buttery pastry casing. This top notch quiche has restored my faith in what I had previously considered to be half-arsed vegetarian cafeteria food. 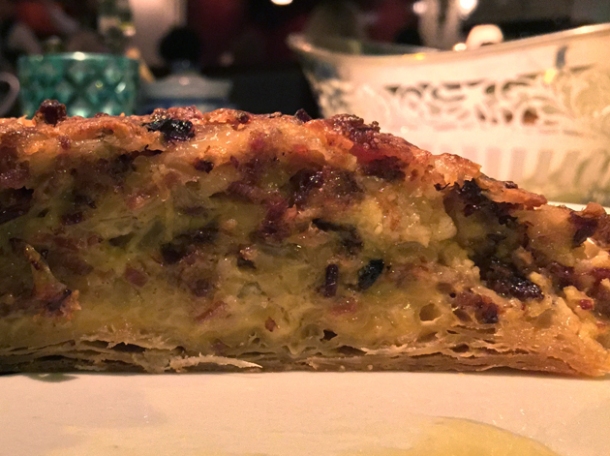 As expected the chicken in the coq au riesling, an Alsace white wine-based take on coq au vin, wasn’t much to write home about. The breast meat was a bit dry, but the leg, thigh and wing meat did at least slide easily off the bone. The chicken provided the meaty backdrop to the real star of the show – the sauce, studded with little onions and mushrooms. Thin yet sticky, meaty, creamy and lightly sweet with a tart finish. Light yet filling, this coq was far more satisfying and just plain better than the heavy and dull renditions of coq au vin that I’ve been subjected to in the past. 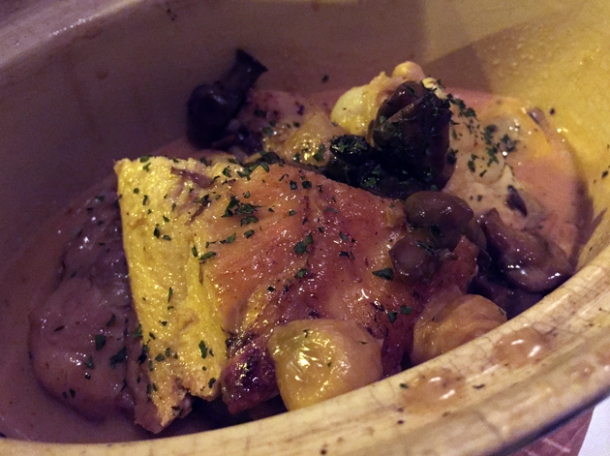 The base of my sweet tarte flambée was crisper and maltier this time around. Whether by accident or design, it suited the chocolate and banana topping well. I wasn’t a fan of the comparatively milky melted chocolate at first, but a more pronounced bitter sweetness came through later – especially when taken with the sweet tang of the banana slices and the milky squirts of cream. It wasn’t quite as well-balanced as the apple and calvados tarte flambée, but this heartier alternative to a crepe was still pleasing.

I’ve largely gotten over my irrational fear of unshelled snails. It’s just as pathetic as it sounds – a grown adult previously unable to eat snails unless they were already plucked out of their shells. Sadly, if you have a similar psychological tick, then Bellanger isn’t the best place to overcome it as the effort-to-reward ratio isn’t really worth it.

The escargots a la persillade could’ve done with a little more resting time – the cockle-like flesh was only slightly less piping than the roasting hot shells themselves. Using the provided utensils is a must. Lightly chewy and somewhere in between a mushroom and a cockle in texture, the snails were desperately lacking in flavour though with the usual earthiness drowned out by the one-note herby bitterness of the dark green sauce. 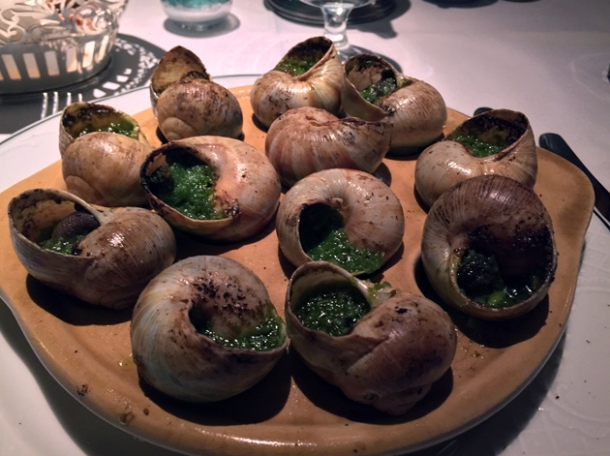 Available by the dozen or half-dozen.

The Baeckeoffe was on firmer ground. Tender hunks of mostly beef were joined by a few select bits of equally juicy pork and lamb in a thin, yet lip-smackingly moreish sauce. Thinly sliced potatoes and carrots provided a little starch and colour. Simple, but very soothing.

Top of the pots.

Back off, this is my Baeckeoffe.

‘Who needs meat?’ says one of my vegetarian friends. Except she clearly had a limited palate before making her life choice.

I wasn’t expecting much from the creme brûlée – it’s so easy to do it badly. I was therefore not only pleasantly surprised by the sheer size of the portion, but also by its execution. The crisp surface had a perfectly balanced sweetness and didn’t stick to my gums, while the light filling underneath was subtly, seductively creamy. 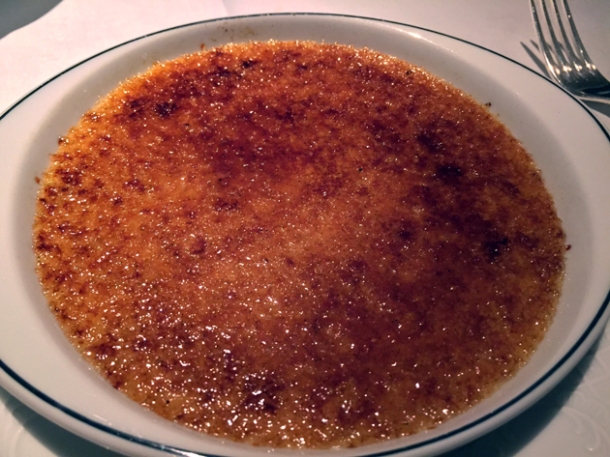 This review’s procrastination was brought to you, in part, by Doctor Who reaction videos on YouTube. 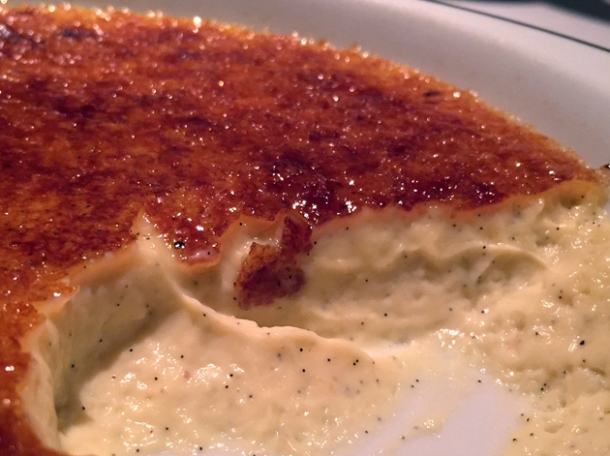 You’re not paranoid if everyone really is out to get you.

The comte, apparently aged 18 months, was creamier, sweeter and had a more subtle nuttiness than I’m used to. Although I still prefer even older comte with a more profound nuttiness and the salt-like crunch of crystallised amino acids, no matter how gauche that may be to traditionalists, this version was still enjoyable. This was especially the case when taken with the well-crafted bun on the side – chewy, dense, nutty and sweet. If nothing else, Bellanger clearly knows some top-notch boulangers.

Bellanger’s pate was surprisingly dense and thus not really spreadable on bread. It was nonetheless very enjoyable – very meaty and mildly earthy with a cumulative if modest peppercorn effect. The prune-like fig jam was incredibly tart and sharp though, overwhelming the pate. It’s best enjoyed on its own instead. 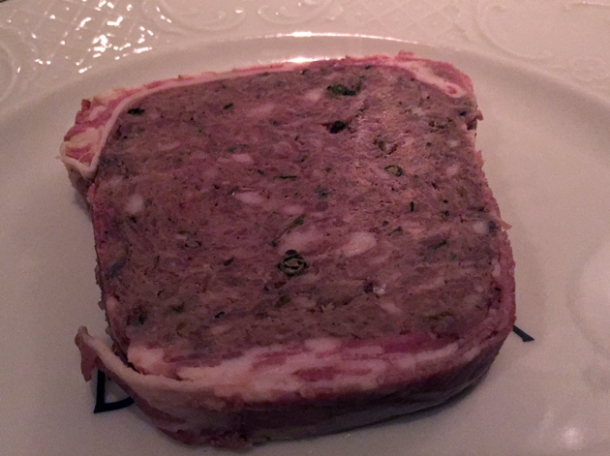 Bellanger’s Strasbourg sausage was mildly chunky with a modest garlickiness boosted by a light daubing of wholegrain mustard. As pleasing as the Strasbourg was, it couldn’t compare to the boudin blanc. Very light and almost chicken-ish, but with an earthy almost offaly character that added a great depth of flavour. It’s similar to a bratwurst, but a true exemplar of its genre. Braised lentils were a fine accompaniment to the sausages – a rich tannic quality along with a firm bite and a soft follow through.

The pastry of the caramelised walnut tart was hearty and buttery, while the sticky walnut filling itself was very heavy with only occasional appearances of the distinctive taste of walnuts. The effect was similar to that of a Twix-meets-Snickers mash up – the whipped cream was a much needed counterpoint to this heaviness. While not entirely unpleasant, a more consistent walnut flavour needs to be present as a pay-off for this palate-deadening heaviness. 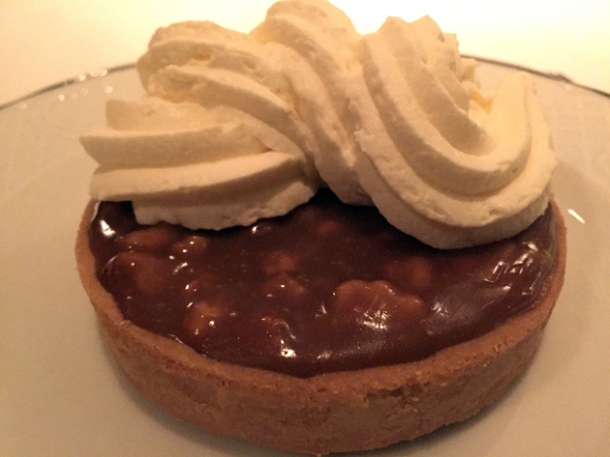 Given the relative prevalence of Alsace brasseries in our nearest continental neighbour, it’s somewhat astounding that it’s taken so long for one to arrive in London. Still, it’s here now and I hope it stays for good. Bellanger’s homely, comforting and traditional Alsacienne classics are extremely well-executed and aggressively priced. There are few other London restaurants that can so effortlessly make me happy after a bruising day at work. C’est bon.

What to avoid: The snails.

Reservations: highly recommended on and around weekends.

Average cost for one person including soft drinks and service charge: £30-35 approx. (if you push the boat out, the cost can rise to around £45-60)