Having American barbecue for lunch in Berlin may seem like a cop-out, but a lot of the restaurants that I would have otherwise visited in the German capital were frustrating closed for lunch – an annoying trend. Plus, and this may seem heretical, there’s only so much currywurst you can eat – especially if, like me, you’re not especially taken with that imbiss classic.

Big Stuff may be a street food stand, but it’s located in a converted covered market hall so it has conveniences such as protection from the elements, a bar, counter seating, toilets and of course plenty of neighbouring stalls to explore. The menu varies from day to day, but you can always try out a heaving platter of all their available meats for the low price of €16 (which is cheap by London standards). Ironically, Big Stuff closes by 20.00 on most of its trading days so if you want a Berlin barbecue supper then you’ll have to get there early. 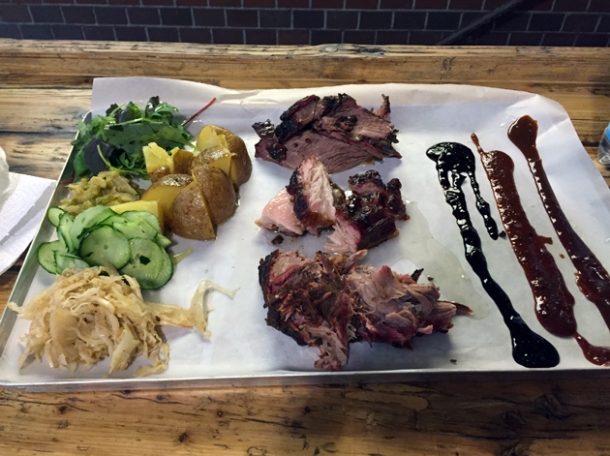 The pulled pork wasn’t smoky enough, but it did have a gently sweet bark while the swine flesh itself had touches of woodiness and saltiness. The interior was a touch on the dry side, but not disastrously so and at least the outer layers were reasonably moist. A good piggy effort overall.

Shoulder to lean on.

The beef short rib had been hewn off the bone in brisket-style slices, so they were therefore missing the connective tissue that gives this cut much of its visceral joy. While very moist and tender, it didn’t quite have enough smoky character. It was far from a complete loss though, especially with the occasional seam of fatty indulgence.

Deboning short rib better not turn into a trend.

I don’t often see pork belly on barbecue menus. Big Stuff’s version had an odd but pleasing bark. Although a bit tough, it also had a wavy, uneven texture and a sweetness that wasn’t overpowering. Although the meat underneath the bark could’ve done with a similar amount and quality of character, the layer of fat had been expertly rendered. It held together well in hand, but it oozed and melted on my tongue seductively once inside my mouth. Rarely have I had such exceptionally well rendered pork belly.

Belly of the beast.

Of the three sauces squired onto my grease proof paper, my favourite by far had to be the unusual and very umami hoisin-like sauce. The pickles on the side were merely okay and were more like gently brined cucumbers. The sauerkraut was disappointingly tame, while the bitter leaves and tender baby potatoes were pleasing enough. The surprise side had to be the pickled celery – its light crunch and natural sharpness were neatly enhanced by the sharp brine-y quality imparted by its pickling.

This feels like a somewhat incomplete verdict given that I didn’t have the chance to try Big Stuff’s take on pork ribs (spare or baby back). Despite this, the misguided deboning of the beef short rib and other imperfections, what I did try was remarkably accomplished. Big Stuff is promising stuff.