A new low for Soho

Stumbling around Soho on a weekend evening with a cohort of inebriated mates is often a recipe for japes and mishaps. Giving money to beggars, attempting to break up a fight, hitting on a sailor and buying dodgy puff are what usually happen. Another is finding somewhere to eat without a reservation which, on my most recent sojourn with Templeton Peck, Vicious Alabaster and The Squinting Brummie, led not to a mere mishap but an outright disaster.

Whyte and Brown is a restaurant that sits on the first floor of the Kingly Court mini-shopping centre nestled just off Carnaby Street. It serves chicken dishes, which elicits immediate comparisons to Nando’s. Although I’m not a huge fan of the other chicken restaurants in Soho, I went in with an open mind. Templeton Peck started off with the chicken tempura, except it was no tempura at all. The thick batter wasn’t as airy, light or crisp as the best tempura, while the wasabi mayo served on the side was far too weak.

It’s like Kung Pao chicken, but with an even worse sauce.

The Squinting Brummie’s croquette balls of ham hock, cheddar and chicken were small, crispy balls that tasted of nothing much at all. A similar level of blandness afflicted Vicious Alabaster’s crab on toast – mushy dollops of muddy red-brown interspersed of blops of avocado and salad.

The ‘crisps’ of chicken skin thin and slightly oily. Most were a touch too soft and, ironically given their name, not crisp enough.

Where’s Gary Lineker when you need him?

As expected the Caesar scotch egg swapped out pork sausage meat for minced chicken and, as expected, was worse because of it. The inconsequential white meat was blander than an accountancy conference. At least the outer coating of the egg was relatively crisp, while the egg itself had a runny, reasonably rich yolk. The garlicky mayo, lettuce and forgettable bacon added the gimmicky and unnecessary Caesar element.

Our starters were a drab, dreary disappointment but were culinary exemplars compared to the omnishambles that followed. The Brummie’s jerk burger was overloaded with salad, but the smooth patty itself tasted of nothing beyond its charred scorch marks. There wasn’t even a hint of the jerk spiced rub that should’ve been there. Even worse was the onion ring needlessly speared through the buttery brioche bun – the hard, bone-dry ring was inedible. The best thing about this shoddy burger was the pineapple coleslaw on the side – it wasn’t too creamy or overpoweringly sweet, yet still had the distinctive taste of pineapple.

When the best part of a burger is the coleslaw side, then something has gone horrifically wrong.

Templeton Peck was insulted by his open club sandwich. A small tip of dry chicken was perched at one end, with the rest of the sandwich consisting of folded layers of tomato, lettuce, egg and ‘smashed avocado’ or ‘poor, hastily-made guacamole’ as it’s known to the rest of us.

I’d rather be clubbed in the head.

Chicken is one of the cheapest meats available outside of roadkill, so a mere half of a roast chicken that costs £13.25 should not only blow your socks off, but give you a reach around and complete your tax return at the same time. What I got instead was the most dramatic demonstration of overpriced, ineffectual mediocrity outside of Westminster. The mild tang of beer in the marinade was a touch too bitter, but pleasing enough – especially when taken with the small bits of garlic and thyme. The drumstick and wing were too greasy though, while the thigh and small rump of a breast were too dry. I would’ve asked the staff for ketchup to lessen my misery, but they were too busy folding napkins or flirting with the leggy blonde at the bar.

Would you like brown meat or white meat? How about none of it?

Vicious Alabaster was genuinely excited by the smorgasbord of a Ploughman’s, but that excitement quickly faded as she started eating. The watery chicken pate didn’t deserve the name, while the shreds of ‘pulled’ chicken had the appearance and taste of damp cardboard and the devilspawn onion ring made a repeat appearance. Compared to such abominations, the limp pickles, forgettable cocktail sausages and mild cheddar (mild!) were welcome relief.

The hard, stick-like fries were inedible, but could probably find a new life as emergency road grit. More palatable was the mac and cheese. The soft pasta shells were mildly creamy and had a thin, crisp crust.

Add ‘truffle’ to the menu description! Fool people into thinking it tastes good!

At this point we should’ve cut our losses and run away screaming. Instead, we stayed for dessert. Vicious Alabaster and The Squinting Brummie both had the Exotic Mess. It looked promising, but none of us could detect any of the promised mango, coconut, banana or passion fruit in the creamed fruit mixture. It tasted very bitter, somewhere in between unripe pineapple and grapefruit pith, while the chunks of meringue were too soft and few in number. The Brummie was so bored, he couldn’t finish his Mess and pushed it aside in disgust.

I should’ve been on fairly safe ground with the sorbet and ice cream, but I should’ve known better by this point. The blood orange sorbet was the least offensive of my trio – icy as well as slightly tart and sweet. The vanilla ice cream was forgettable, while the salted caramel was mildly sweet with no salty contrast at all. Häagen-Dazs’ own lack-lustre salted caramel ice cream is more interesting than this dreck. 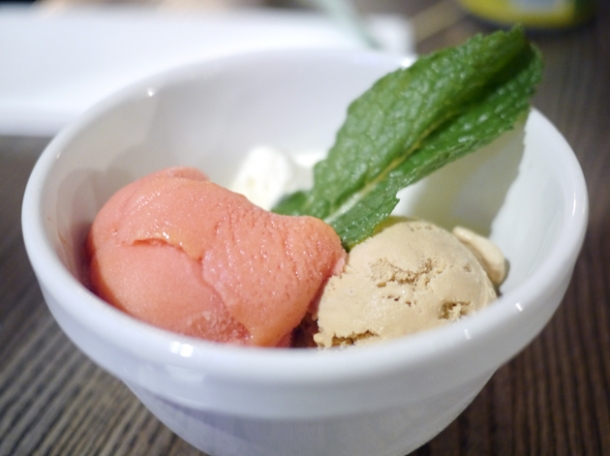 I bumped into Kangaroo Face propping up the bar and he was surprised to see me eating there. Unlike myself, he had the good sense to avoid eating at Whyte and Brown. I don’t blame the kitchen staff, who are probably all minimum wage short order cooks following orders, but the management and executive chefs should be utterly ashamed of themselves for perpetrating this atrocity. Shoddy food at overinflated prices – KFC would be better value and I despise KFC. This utterly appalling restaurant is one of the worst I’ve been to in recent memory. Avoid.

Average cost for one person including drinks when shared between four: £40 approx.