Restaurant decor in London seems to have fallen into a Shoreditch-inspired rut. Bare light bulbs, reclaimed furniture, exposed concrete and brick walls – I’m bored of it all. The interior of Iberica’s Marylebone branch is therefore a breath of fresh air – both the ground floor and the mezzanine are decorated with handsome Spanish tiles and lanterns. The Randy Northerner was sure that the place popped up in an episode of W1A, but The Flame Haired Squelchie, Boris Bike and I were more concerned with ordering as much as the menu as we could in one sitting.

The Randy Northerner is lactose intolerant, but his attempts to get the staff to point out which dishes were suitable for him to eat (beyond the obvious, of course) were either ignored or met with incomprehensible mumblings. He was left to his own devices and therefore deprived himself out of over cautiousness. Given the clientele of suits and moneyed tourists, such inept service was surprising. Professional hospitality at its finest.

We started off with a small platter of jamon. The waxy flakes of beher etiqueta oro was mildly sweet, while the Juan Pedro Domecq started off with a fruity taste and ended with a nutty finish. My favourite had to be the Covap Alta Expresión though – a layer of creamy fat and a salty taste mildly reminiscent of soy sauce. 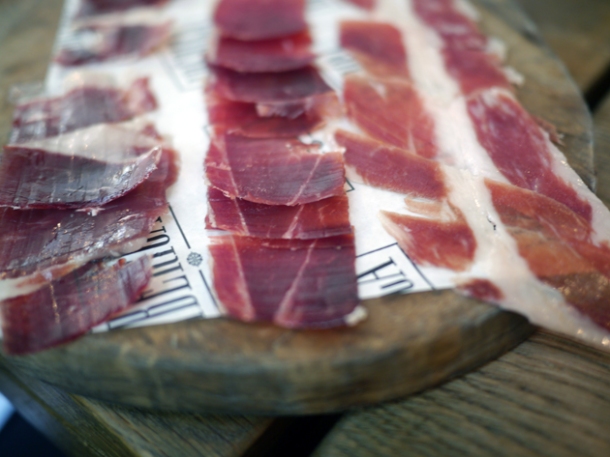 Why I could never become a vegetarian.

The Randy Northerner obviously couldn’t enjoy the Torta de Trujillo, a soft sheep’s cheese. Although I was largely indifferent to it, the Flame Haired Squelchie enjoyed its mild saltiness.

Although we were eating just outside of the English asparagus season, we were still disappointed by the limp, tasteless asparagus on offer. It was at least served on a bed of nutty manchego cheese, a moreish combination of truffle oil and sweet onion confit and soft, fluffy toast. 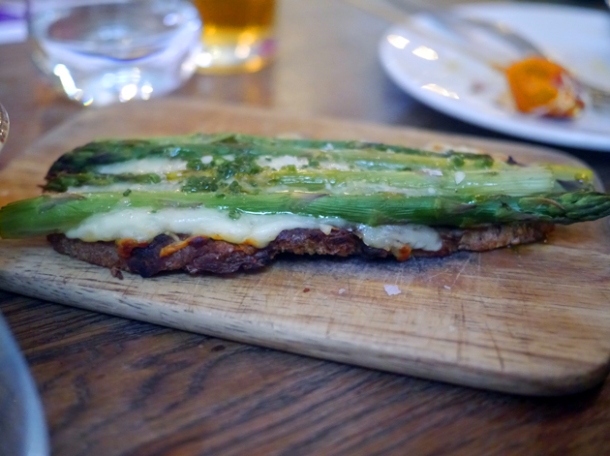 Unexpected uses for a George Foreman grill. I kid. I’m sure it’s a Hulk Hogan grill instead.

The tortilla was reasonably firm and stuffed with with sweet onions and starchy potatoes. More unusual, yet far more enjoyable, was the light, creamy and lightly sweet chickpea purée. It was studded with tender cubes of pancetta and salty bits of chorizo, making it all the more delectable.

This ain’t no hummus.

The cubed potatoes that made up the patatas bravas were nothing to write home about and the alleged spicy sauce drooled on top had as much heat as an Arctic gust of wind. More interesting, but no more successful, was the salad of avocado, apples, beetroot and strawberries, but the latter far outnumbered the other fruits and vegetables here. The muted sweetness of the strawberries and the sparse scattering of slightly sweeter than usual beetroot and mildly creamy avocado were tolerably amusing on their own, but the subdued flavours didn’t really gel together to form a coherent whole. 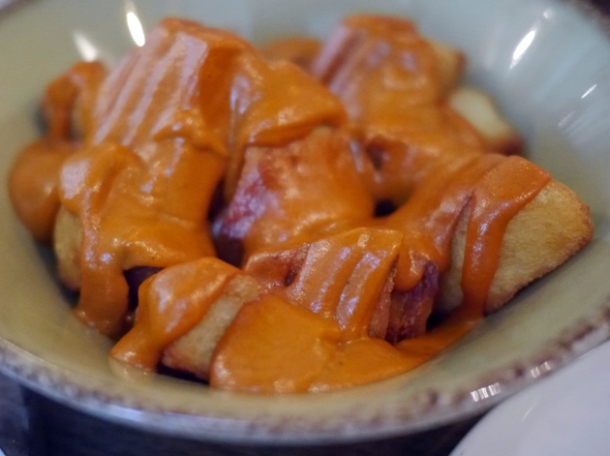 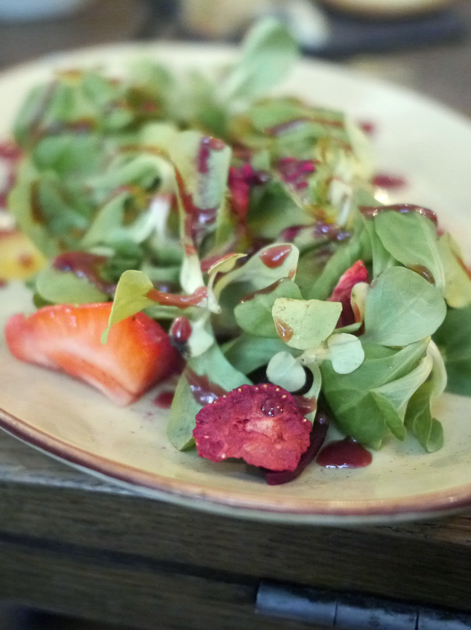 The Squelchie avoided the octopus (they’re too cute, apparently), but she wasn’t missing much. The soft slices of octopus and potato were deeply unremarkable, with the only flavour coming from the dusting of smoked paprika but even this was rather muted.

Day of the tentacles.

The black rice with cuttlefish had a risotto-like quality to it. The sticky, small-grained rice was stained with cuttlefish ink and was reasonably moreish. There were occasional hits of soft, salty cuttlefish but these were few and far between. Even then, the cuttlefish was overwhelmed by the garlicky, sickly, overly creamy aioli. Although far from perfect, I was still willing to scoff it – the Squelchie and Boris Bike, on the other hand, disliked it so much that they actively avoided it.

Eating this will give you goth lips.

The trout somehow managed to be both earthy and light, but the bed of almond puree and crumbs of pickled cauliflower scattered on top of the fish were bland. 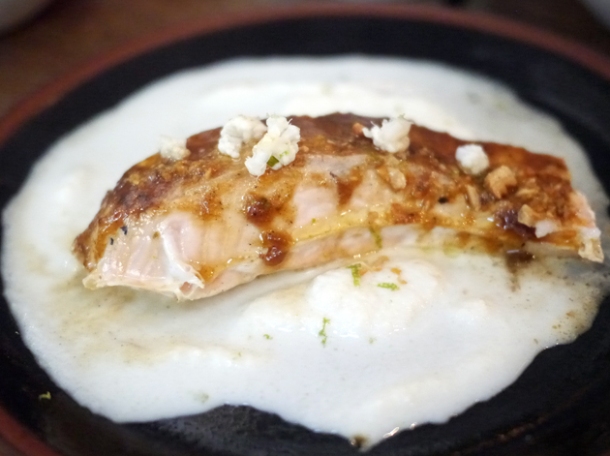 Segovian suckling pig is renowned for its quality, but something had clearly been lost in translation here. The lean pork was drearily bland, but at least the crackling was reasonably crispy.

Far more successful were the earthy, unctuous lamb sweetbreads served in a thin, light, sweet and gently creamy egg sauce. I thought it was a great combination, although the Squelchie begged to differ. She enjoyed the sweetbreads, but not the sauce.

The earthy fillet of lamb had a crisp crust and was dressed with sweet tomatoes and peppers that complimented its meatiness well. 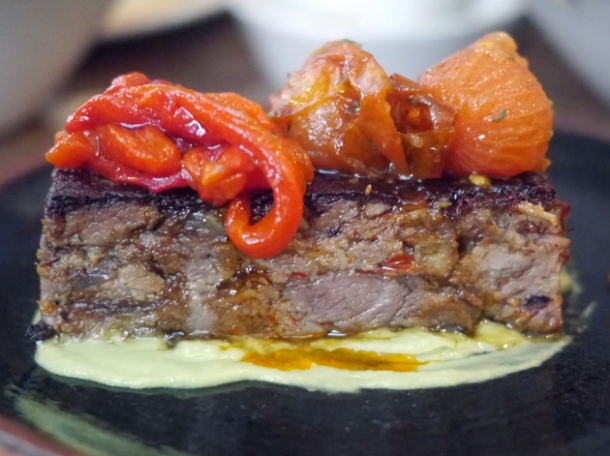 Chorizo lollipops aren’t as crazy as they sound – balls of chorizo deep fried in batter and served on a stick. It’s a fun dish, but this is due to the contrast between the crispy, oil-free batter and the tenderness of the meat as well as the garlicky aioli – not the been here-done that, uninteresting chorizo itself.

Boris Bike’s apple tart looked unusual, but he struggled to remember much about it mere moments after it passed through his lips. It wasn’t too heavy and the cool creaminess of the underlying dairy whip was pleasing enough, but that was it.

My light and smooth rice pudding had an unusual crisp layer of caramelised sugar on top. Both the smooth texture and the crackling made this pleasing rice pudding vaguely resemble a creme brûlée.

The Squelchie enjoyed the zesty iciness of her lemon sorbet, but found the raspberry variant unremarkable. 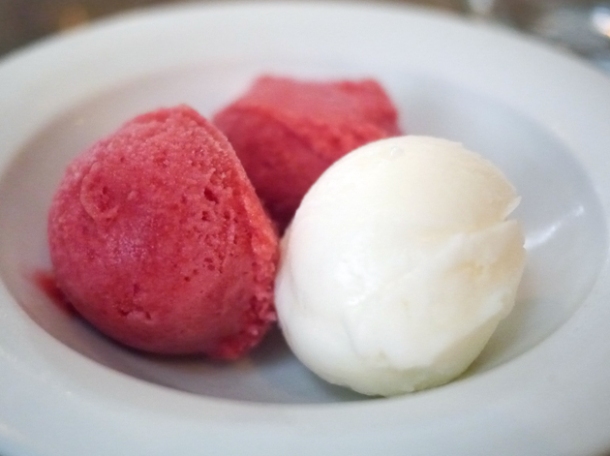 The quality of the food at Iberica varied wildly. For every successful, tasty dish was another that was unbalanced or another that was just shoddy and bland. Even more egregious, considering the price, was the inability of the staff to take my dining companion’s dietary requirements into consideration. Iberica Marylebone just scrapes in a Three Star rating, but I’d only eat here again if I couldn’t get a table at the nearby Salt Yard or the slightly farther afield Ember Yard.

What to skip: Suckling pig, octopus and potato

Average cost for one person including soft drinks when shared between four: £60 approx.