The phrase ‘dirty food’ is often used to describe the casual, inexpensive, non-haute cuisine, such as burgers and burritos, that have taken London’s restaurant scene by storm ever since the recession. I don’t like the term as it implies that such food is somehow grubby, inferior or less deserving of critical attention and devotion than other food – an implication that is patently absurd.

It’s hard not to think of the phrase though when eating at Barnyard. A spin-off of the nearby haute cuisine restaurant Dabbous, a lot of effort and expense has gone into making the place look as informal, rough and cheap as possible. The place looks like the inside of a corrugated iron and wooden shed with the staircase leading to the main mezzanine dining area winding around a tree. To complete the rough and ready effect, the staff are all clad in a similar-but-different non-uniform of denim and plaid.  You’ll either love these cute farm-based gimmicks or hate the artificiality of it all. 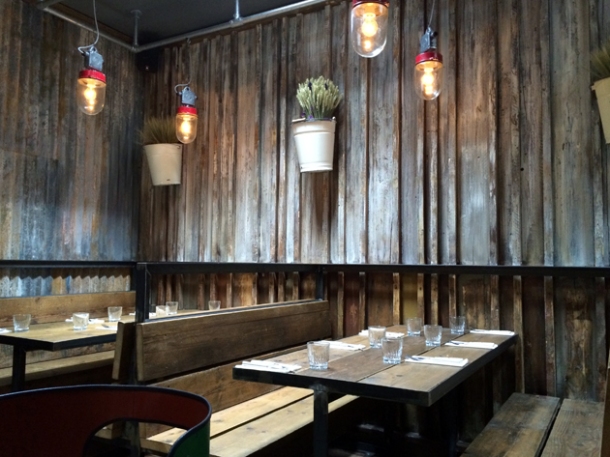 It takes a lot of money to make somewhere look this cheap.

The staff themselves are great though – they’re all uniformly friendly, helpful and ruggedly attractive to boot. It pays to get here early though, or else be prepared to queue or cool your heels at the bar. The place was almost full by 12.30 on a weekday and absolutely heaving by 18.15 on a Friday evening.

Bring out the gimp!

The menu at Barnyard is divided up into pig, cow, chicken, egg, veg and pudding sections and the idea is that you order two or three dishes per person. Although it sounds weird, the roast beef on toast with warm horseradish buttermilk is a must-have. The tender, rare, quivering slices of beef were served on a ciabatta-like wafer of toast. The beef had a strong smokiness to it. Although a bit forced and cloying, the smokiness was nonetheless pleasing. It would’ve all been for nothing if not for the buttermilk though – its creamy, slightly sour taste complimented the smokiness of the beef exceedingly well. The peppery watercress was unnecessary, but it did add a bit of colour. 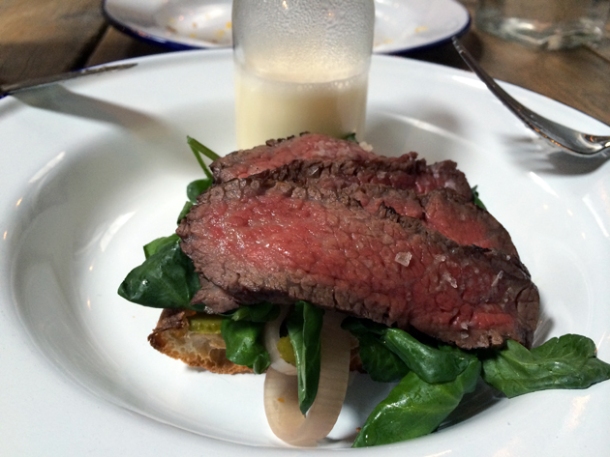 Less spectacular, but still competently well-executed was the suckling pig. The tender, moist and unseasoned pork was topped with a perfectly crisp crackling that broke apart with minimal effort. The included side of celeriac was firm with a slight aniseed flavour and wasn’t too creamy, heavy or cloying either.

Barnyard’s menu may have a mostly British feel, but that doesn’t stop the kitchen from serving up an excellent American-style cornbread. Oddly served in a brown paper bag, the moist, fluffy carb cubes were dotted with corn kernels that enhanced its natural sweetness. It’s easily the best cornbread I’ve had in London.

Another Yankee-esque dish was the dessert of popcorn ice cream with smoked fudge sauce. The milky ice cream only had a vaguely sweet popcorn-ish taste to it, with most of the caramelised sweetness coming from the actual popped corn kernels studding the ice cream. Drizzled over the entire thing was a tangy, caramelish, lightly smoky fudge sauce that wasn’t nearly as evocative as it should’ve been. Although not bad, this dessert left me underwhelmed.

The beef shortrib was sadly unavailable on my second visit, so I opted for the substitute of bavette cooked medium rare. There was no faulting this sublime cut of steak – tender and juicy with a light smokiness which wasn’t anywhere as forced as the smokiness of the roast beef. The odd accompaniment of devilled mayonnaise, or at least something similar to devilled mayo, was unnecessary.

It’s easy to dismiss the broken eggs with mushrooms, garlic and parsley as the meatless half of a fry-up, but this veggie-friendly dish is well-worth having. The tender, taut, slippery and lightly earthy mushrooms went down a treat with the runny eggs, parsley and crispy, thin slices of bread.

The chicory salad was zesty, minty, lightly bitter and not too firm. It was very refreshing and helped cleanse the palate after the relatively heavy steak and eggs.

I want your lovage.

There’s a hint of the Nordics in the cloudberry and apple crumble. The soft, generic, mildly tart fruit was topped with a loosely packed and mildly crunchy crumble. There’s far more crumble than fruit which isn’t made up for by the dollop of smooth, exceedingly rich clotted cream served on the side. Underwhelming.

Nobody understands the cloud.

I returned to Barnyard with The Euro Hedgie in tow. I started off with the sausage roll which is a simple, but tasty l’il thing – crisp, flaky pastry wrapped around moist, smooth, mildly herby sausage meat. If nothing else, the deep, warm brown colour of the pastry was very attractive.

Barnyard’s chicken wings aren’t as barnstorming as the ones available at Patty and Bun, but they’re still very good – tender meat with a mildly zesty and spicy flavour.

There were no surprises or twists with the Hedgie’s mince and dumpling. The very traditional dumpling was small, but had a firm bite and a tender interior. Gulping it down with the moreish, herby mince was very soothing. A very homely dish. 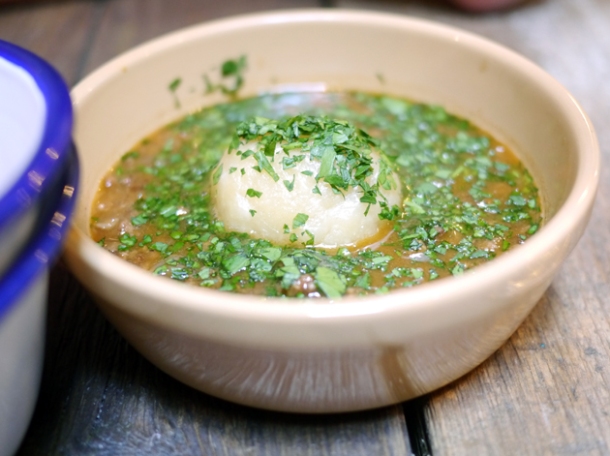 I don’t mince my words.

My beef short rib was by no means bad, it was lacking. While lean, moist, rare and slightly chewy with a hint of smoke, I ultimately prefer the classic American barbecue take on this cut of cow – slow cooked on the bone with some lovely collagen and fat. Barnyard’s more pedestrian version doesn’t cut it.

With a moo moo here and a moo there

The firm, charred broccoli was fine but unremarkable – a large helping of one of your five a day.

(There’s no photo of this one, but I’m pretty sure you all know what broccoli looks like.)

Barnyard has a selection of milkshakes, which can also be laced with various alcoholic tipples. The Hedgie wasn’t in the mood for a lashing, so he opted for the soft blueberry pancake which tasted like the distillation of a blueberry muffin into a thin, milky liquid – a very child-friendly drink. My own popcorn milkshake was disappointing. Like the popcorn ice cream, it was far too mild.

The Hedgie had to dash, leaving me to have a dessert of lemon posset alone. The posset was moderately thick and creamy with a mildly citrusy hit to it, but the small flecks of marjoram were so small as to leave very little impression.

I returned to Barnyard one last time, this time with the help of the Flame Haired Squelchie. She managed to expose a chink in the staff’s competencies as not even the bartender knew if any of their beers was wheat-free or not. This was a problem as she’s mildly gluten-intolerant, but she risked a bottle of Little Creatures anyway, a pale ale that was apparently hoppy without being too sour.

The Flame Haired Squelchie has a fondness for dangerous little creatures.

She was most giddy about the Gosnells mead and practically gnawed the waitress’ hand off when she brought over the bottle. The Squelchie was surprised by its gentle fizziness as she’s more used to still mead. She was intensely pleased by how the initial hit of boozy beeriness gave way to the taste of sweet honey with hints of purple calpol.

The Squelchie also loved the taste of my lavender milkshake, but I found it too sharp and medicinal. It also didn’t help that I’d accidentally been served the hard version laced with gin – alcohol and I don’t get on. At all. Still, the slightly sour and malty taste of a second malt milkshake helped make up for it.

The Squelchie really, really likes mead. And who doesn’t like the taste of calpol?

The Squelchie has had to give up vegetarianism for medical reasons, but she didn’t seem too disappointed as she dismembered the chicken wings with wild abandon, followed by the suckling pig. They were just as good as before, although the Squelchie found the chicken wings’ zesty, spicy sauce a touch too oily for her liking.

I, on the other hand, drank every last drop.

Someone at the next table left over half of their pork uneaten! Shockingly wasteful.

While the Squelchie and I unnerved everyone in the vicinity with our platonic nuzzling, I chowed down on the toast topped with lard. The crisp ciabatta-like bread and the thin, fatty dripping was a treat.

Chicken in a bun was a simple, but very well done dish. A crisp, lightly fluffy finger bun was filled with a tender, glossy, lightly smoky fillet of chicken. The meat was complimented nicely by a creamy, lemony dressing. Simple, but oh so satisfying.

The chunky, starchy bubble and squeak was topped with a sweet and sharp apple chutney and a suitably runny fried egg, but the mashed black pudding wasn’t anywhere as meaty, salty or oaty as I would have liked.

A small, soft, chunky jacket potato was livened up with daubs of creamy, lightly smoky butter. Tubers have rarely tasted so good.

The most boring photo I’ve ever posted.

Both the Squelchie and I opted for the acorn flour waffle for dessert. Apart from its small size, it wasn’t bad – a moderately nutty and slightly chewy waffle served with sweet, malty chocolate and thick, smooth clotted cream on the side. The Squelchie suspected the acorn flour might have been bulked out with wheat flour, but her churned stomach rumblings were inconclusive.

Stop waffling and get to the Verdict!

Both the Squelchie and I finished off our meal with a couple of flat whites. A bitter, sharp espresso had been used as the basis of this flat white, but I still enjoyed it even though I usually prefer a mellower, less acidic brew. The head was thin and not too foamy, but it wasn’t especially silky.

Straddling the line between a latte and a proper flat white.

No matter what you think of the quirky decor, the food at Barnyard is simple, soothing, comfort grub. There were quite a few letdowns – the desserts are all uniformly meh for example. It’s not worth queueing for, but if you can snag a table with ease then you’ll fill your belly well at a fair price.

Average cost for one person including soft drinks but excluding tips: £25-30 approx. (add around £10 more for alcohol)