Winter is coming and the cold weather doesn’t lend itself to chowing down on street food. Still, it’s well worth stopping for a quick lunch at Berwick Street market if you happen to be in the area – surprisingly good nosh can be had at low prices. Banh Mi 11, a stand serving up Vietnamese baguettes, is one of my favourites as is Pizza Pilgrims.

This stand cooks its thin Neapolitan-style hand-tossed pizzas to order using a gas-fired oven in the back of a converted Robin Reliant. The three item menu changes daily, so not all of the pizzas detailed below will always be on sale but the basic cheese and tomato margarita, which forms the basis of almost all the other pizzas, is always available.

The spicy salami pizza uses thin horizontal strips of salami that are predominately salty with only a very mild chilli kick every now and again. The crispy thin base was fluffy on the inside, but it was a little too chewy in places and a bit greasy too. The quality of the mozzarella can’t be faulted though – creamy, sweet and wonderfully viscous.

Chances are in London that if something is described on the menu as ‘spicy’, it really, really isn’t.

If the base of the spicy salami pizza was a mixed bag, then it was an unconditional triumph in the nduja and rocket pizza. Although still slightly greasy, it was remarkably and consistently fluffy and soft all the way through with a crisp, lightly charred crust. The soft, spreadable texture of the peppery, mildly spicy nduja sausage was a revelation. It was complimented nicely by the zingy rocket and the mozzarella which was just as excellent before.

Nduja – where have you been all my life?

The toppings on some of the pizzas can be a little sparse. This no doubt helps prevent the thin base from drooping and sagging and helps the stand, which has only limited space, from managing its limited stock of ingredients. It’s still a little galling though.

The garlic and courgette pizza had a base identical to the one used in the nudja and rocket pizza. The herby warmth and heat from the garlic complimented the butteriness of the courgettes, but there wasn’t much of either topping. 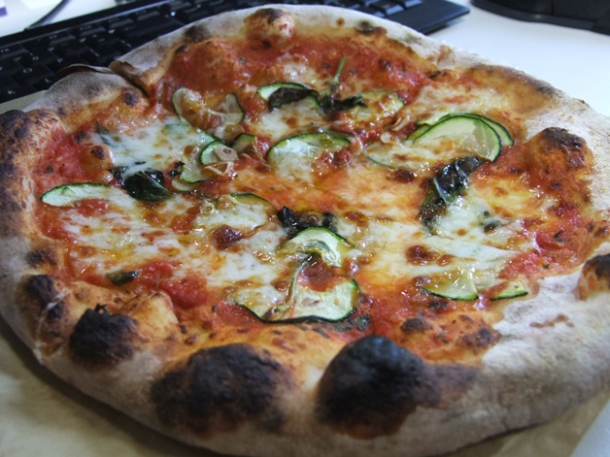 Since Italy gave the world pizza, it’s only fair we overlook its pesky mistakes like fascism and Berlusconi.

I enjoyed the creamy slices of eggplant on the aubergine and rocket pizza, few as they were, but the rocket was very muted this time around and lacked its usual pepperiness. 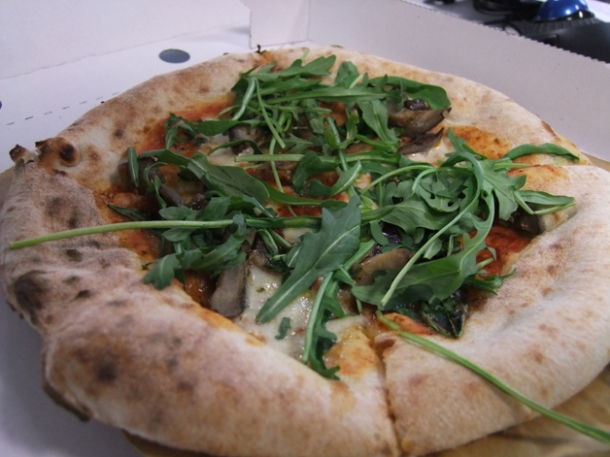 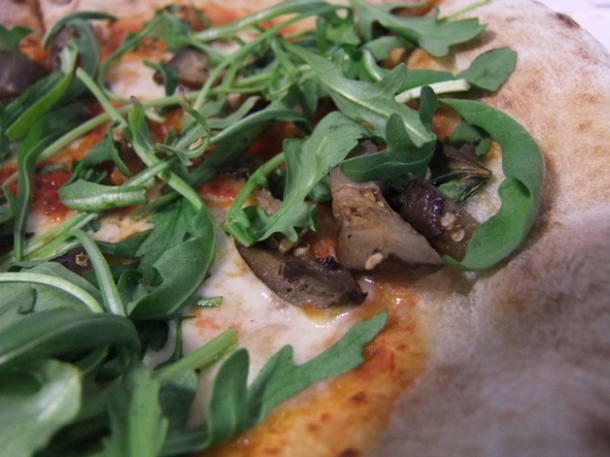 Anchovies and courgettes were a more inspired combination. The salty, oily little fishies weren’t quite as visceral in their flavour as the Cantabrian anchovies often served at Terroirs but they were complimented nicely by the butteriness of the courgettes. You might have to squint to make out either ingredient though. 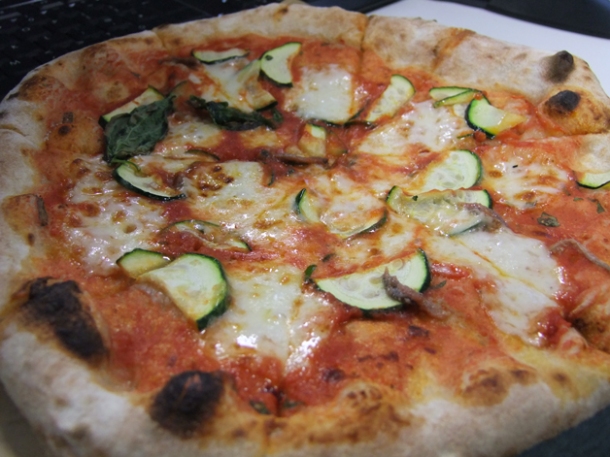 I only started appreciating anchovies late in life.

Anchovies turned up again on another pizza, but paired this time with oregano and garlic. The herby hit of the oregano, the mild heat of the garlic, the creaminess of the mozzarella, the salty tang of the anchovies and olives on top of the thin, soft base fused together to form a delightful combination. Although the scattering of toppings is still on the thin side, it’s still a shame that this pizza isn’t served more often.

A pizza the action.

Pizza Pilgrims also sometimes serves up a bianca pizza where the tomato sauce is left out. I tried out the sausage and wild broccoli version which, unsurprisingly, isn’t as sweet as the other pizzas due to the lack of the tomato sauce. Its omission does allow the mature punchiness of the mozzarella to shine through though. The meaty specks of sausage had a fennel-esque edge to them that was complimented well by the sharp, spinach-like flavour of the broccoli strands. Unfortunately, the biancas tend to be noticeably chewier and greasier than the tomato sauce-blessed pizzas.

Pizza Pilgrim’s pizzas aren’t perfect – they can’t quite live up to the standard set by Franco Manca for instance – but they easily outclass the other pizzas available in Soho.

Total cost for one person: Approx. £6 per pizza.

4 thoughts on “Pizza Pilgrims review – pizza worth trekking for”