There are more than a few upmarket Indian restaurants in London, although what your extra money usually gets you compared to a bog standard curry house is better service and more polished, comfortable surroundings. The Red Fort on Soho’s Dean Street certainly has a plush interior, moody lighting and efficient service, although warmth and friendliness was somewhat lacking on both of my weekday visits. Despite its polished decor, The Red Fort isn’t always a quiet place for a romantic rendezvous or a calm, considered business meeting. It can be surprisingly noisy, with giggling gaggles of girlies and a dull thump of music from the downstairs bar disturbing the peace.

Red Fort has many of the usual curry house staple starters on its menu, such as the tender and smooth, if rather flavourless seekh kebabs. The sauceless chunks of tandoor-cooked chicken were a little better – although tender, they were only lightly smoky.

Red meat at The Red Fort. 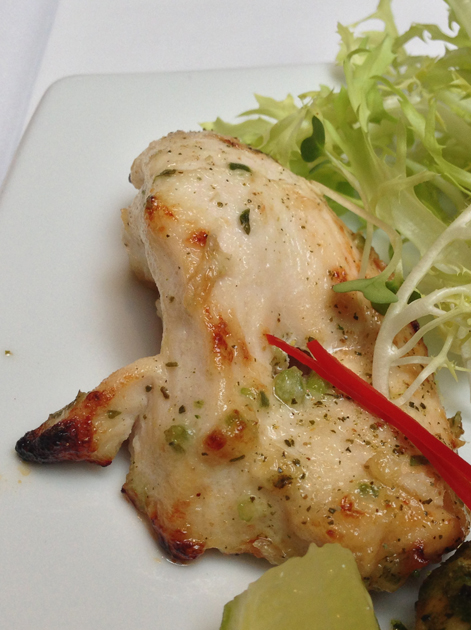 The tandoor-cooked king prawns were better – firm and smoky with a light hint of garlic. The broccoli florets was the standout starter here, topped with a flavoursome, mildly bitter paste made from cumin and fenugreek.

Broccoli rarely tastes better than this.

The business associates with whom I was dining were clearly a soft-headed, gullible lot as they were far more fond of the forgettable meat dish than they were of the superior vegetable dishes. The chunks of chicken were certainly meaty and tender, but the coriander, saffron and chilli sauce in which they were served was anonymous and forgettable.

I was far more impressed with nutty and soft lentils served in a rich cumin sauce. The aubergine curry wasn’t quite as good as the lentils, mainly due to the fact that the fleshy vegetable pieces were a little tough and served with the skins still on, but the rich, exceedingly creamy sauce went down a treat and was dotted with whole peppers which were surprisingly and powerfully spicy. 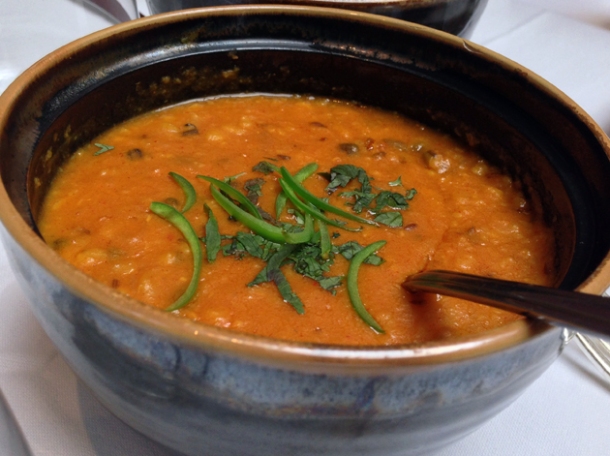 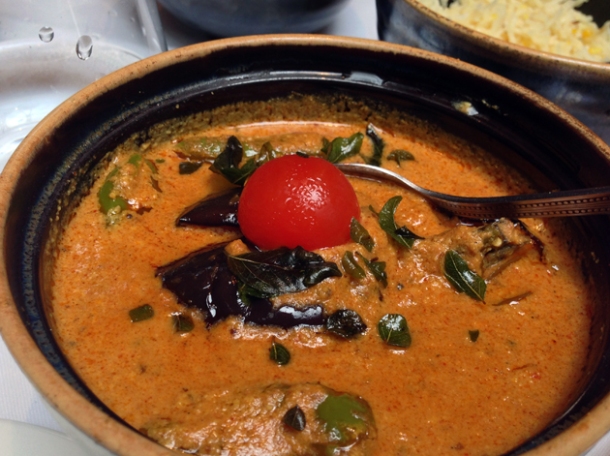 The cherry tomato is just for show.

Because without it, this dish would lose all its good looks.

The only disappointing vegetable dish was the sauteed spinach. The kitchen was clearly treading water here. The basket of soft and gently spiced roti breads were a good way of mopping up the excess sauce though.

I wasn’t expecting much from the mango ice cream, so I was pleasantly surprised by its creaminess and its distinctive, unmistakable taste of mango.

For some reason The Lensman doesn’t like mangoes. Odd.

My first meal at The Red Fort was a mixed bag, but my second was far better. Dining alone this time, I started off with the scallops marinated in mint, curry leaf and coriander. The firm, meaty and zingy quartet of scallops were complimented well by the mild heat and the strong taste of coriander, although the odd topping of julienned apples was unnecessary. The dish was accompanied by a trio of chutneys, the best of which was the banana chutney – the sweet tang of which went surprisingly well with the scallops. 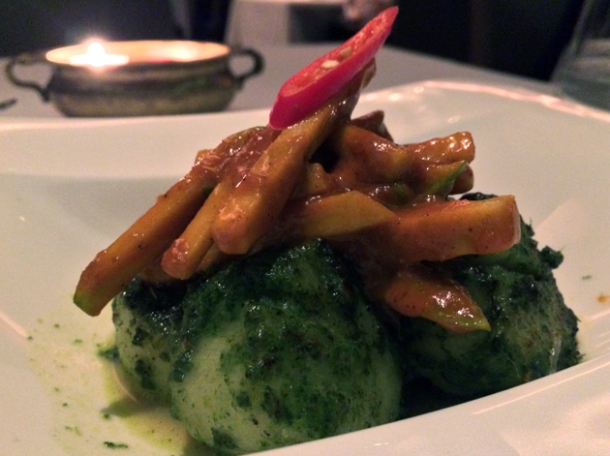 The texture of the meat used in my rabbit curry was a touch inconsistent, with some chunks a little too soft but enough of the chunks were firm enough for me to overlook this. The sauce may have been mild, but the punchy taste of fennel with a hint of mustard seed did make the sauce irresistibly moreish and a good match for both the firm chunks of bunny and mopping up with the scrumptious bread selection.

A good accompaniment to the rabbit was the vegetable dumplings. This trio of soft, slightly doughy dumplings dotted with tenderised cashews was served in a sauce that was creamy, but not excessively so. My sauces got mixed up at some point during the meal, so I’m not sure if it was the rabbit or the dumpling sauce that had a mild, but piercingly palate cleansing freshness to it.

Despite the rich heritage of Indian desserts, The Red Fort’s menu is surprisingly devoid of them concentrating instead on ice creams. One exception is the gulab jamun – small, soft doughnuts made from curdled milk solids. Although pleasingly soft, the thin syrup was rather bland when it should’ve tasted of rosewater and saffron. 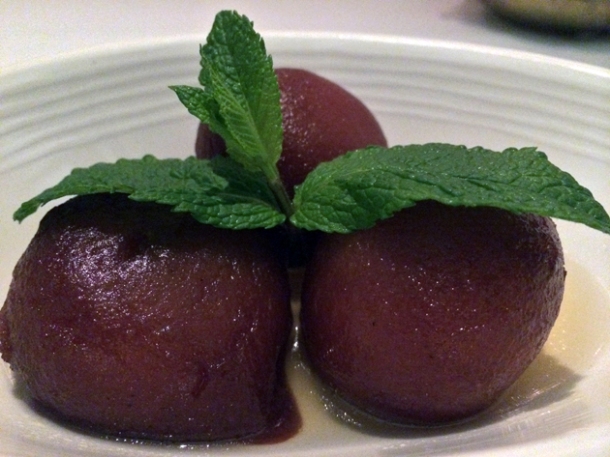 The food at The Red Fort can be hit and miss, but when the kitchen gets it right it can be quite splendid. It’s certainly not cheap though which is something I could live with if it wasn’t for the soulless service and the less than serene atmosphere. If you can live with these caveats, then it’s worth visiting The Red Fort.

Average cost for one person including soft drinks and service: £65 approx.