I am as constant as the northern star?

I greatly enjoyed my first visit to Moti Mahal, which proved to be one of the most accomplished and delicious high-end Indian meals I had tasted at the time. Consistency is a tricky thing to maintain though and I was curious to see how well the Covent Garden institution had upheld its standards since my last visit. Helping me out this time around was the Euro Hedgie who had never dined at Moti Mahal before.

Unlike last time when I sat in the sedate, moodily lit downstairs dining room, this time around we were placed upstairs which was moderately brighter and a little buzzier. Sadly, while the service was efficient as before, the quietly efficient and courteous manner from my last visit was replaced by a slightly more brusque and harried tone. Something which I failed to notice the first time around is the oddly structured menu which is organised geographically around the regions of India visited by the chef. Although interesting, it doesn’t help when you’re trying to figure out if you’ve ordered enough or not.

Moti Mahal still maintains its tradition of serving up a DIY salad for the table which you’ll find either quite charming or a bit gimmicky. It is still a refreshing way to start a meal though, assuming you have the energy to chop all those cucumbers, radishes and leaves. 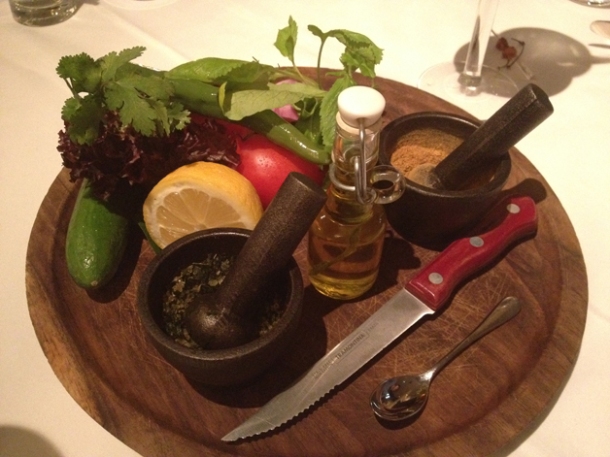 There's at least one of your five-a-day in there.

You wouldn’t know it from the typically meat-heavy menus of most curry houses, but there’s a fine tradition of vegetarian cuisine on the Indian sub-continent. You wouldn’t know it from Moti Mahal’s gourd and lentil dumplings either. Apparently simmered in a yogurt tomato sauce, they tasted like soggy, milky bread which was just as one-dimensionally bland and uninteresting as it sounds.

For Gourd and Country.

We were also unimpressed with the pan-fried aubergine steak. Described on the menu as stuffed with seasonal vegetables – which means carrots and potato at the height of winter. They dominated the taste of this dish, obscuring what little aubergine there was. The accompanying tomato chutney was quite dull, but the second chutney had a smokey, citrusy flavour which was far more interesting and helped liven up an otherwise dull dish. 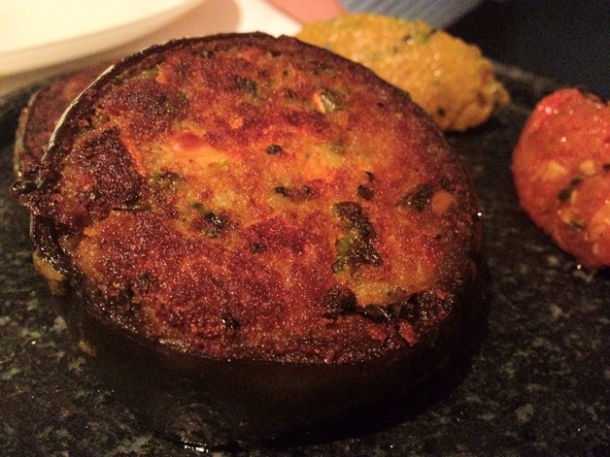 Give him a good stuffing!

The evocative sounding fried courgette flower stuffed with whiting and flavoured with curry leaf and smoked onion seeds turned out to be far more pedestrian. The resulting mash tasted like a lightly spiced crab cake – and I hate crab cakes. 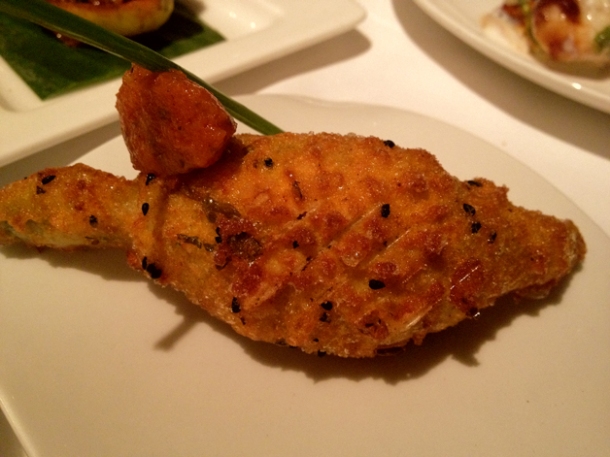 According to the menu lamb’s brains are apparently an aphrodisiac, but Moti Mahal’s lamb brains dish didn’t elicit any amorous feelings either from myself or the Hedgie. The mildly spicy, oil-soaked brains had a squidgy texture almost resembling a cross between tofu and crab’s head meat. Although the mild heat was quite enjoyable, like all the dishes so far, the brains were curiously de-textured which took away a substantial part of the joy to be had from eating them. 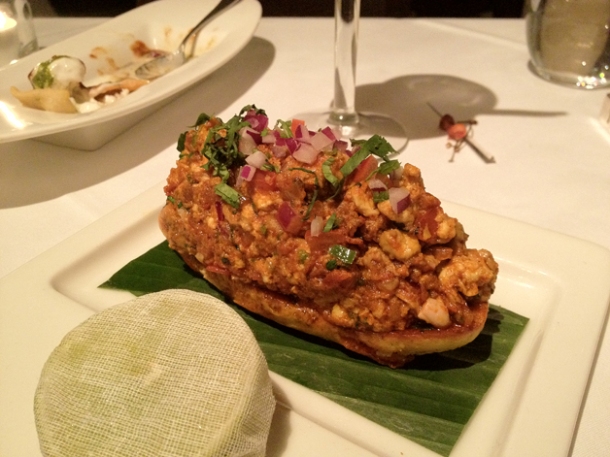 I only want you for your brains.

I tend to avoid korma curries on my occasional trips to curry houses since their sickly sweet, excessively creamy taste offends me. That wasn’t a problem here though – the korma sauce covering the morels, a type of mushroom, was creamy, sweet and nutty but not excessively so. The flavour of the sauce was enhanced by the addition of apricots and almonds, although their odd textures did throw me initially. The morels themselves were surprisingly muted, perhaps smothered under all that sauce. Perhaps that’s a reason why you don’t see mushroom curries that often?

One of the more successful savoury dishes of the evening was the Rajasthani lamb curry. The garlicky, dry heat of the red sauce complimented the tender chunks of stewed lamb very well. It sounds similar to almost any other lamb curry you could get elsewhere, but this is a little unfair – it’s remarkably unoily and the dry heat is spicy without being overpowering. 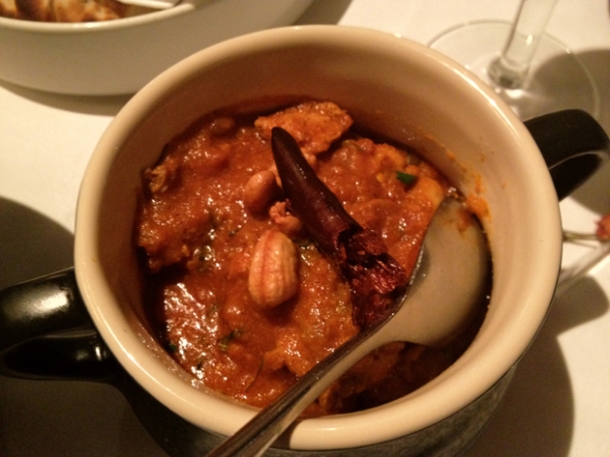 The warm and fluffy tandoor-cooked breads proved to be ideal for mopping up any stray sauce and were quite moreish in their own right. 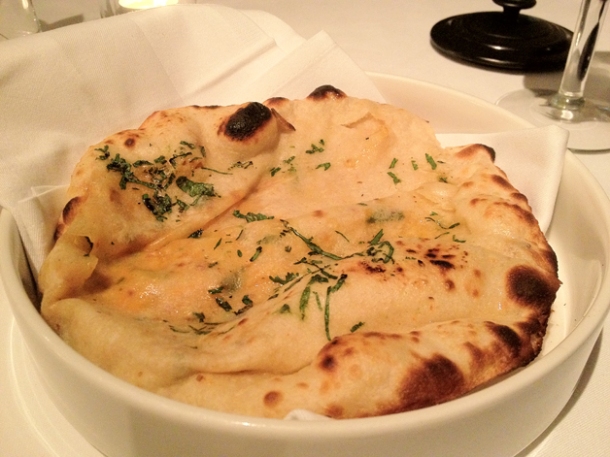 The Hedgie wasn’t in the mood for dessert, but I went straight for the Thandai Falouda, a layered pudding. The molasses-like bottom layer is dark, sweet and tangy. This is quite a contrast to the middle layer of rice pudding which, while a little lumpy, is creamy and nutty. The upper layer of cream is very smooth, but otherwise unremarkable. Although the layers are quite successful on their own, the whole thing doesn’t quite come together as a unified whole and the addition of an inoffensive chocolate biscuit bar didn’t help either. It doesn’t quite manage to be either crunchy or chewy and seemed like an unnecessary addition. 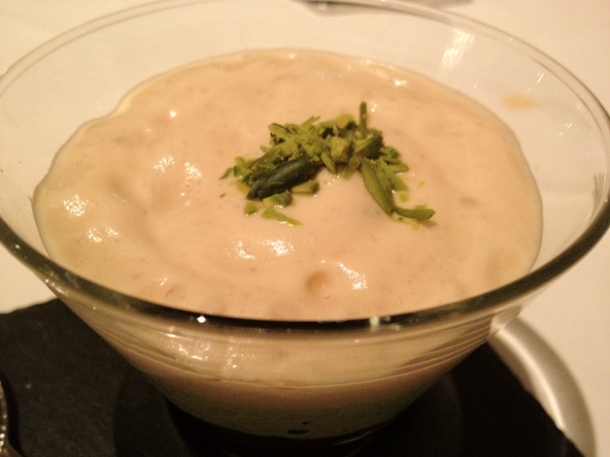 A chocolate biscuit by any other name tastes just as sweet?

I washed it all down with the confusingly and similarly named Thandaai, a cold milk drink apparently blended with poppy seeds, almonds, coconut, cardamom, pepper and cumin syrup. It was certainly refreshing and milky with a surprising and unusual peppery hit to it, but all those ingredients were somewhat lost in the mix.

The Hedgie opted for the Smooth Morello, a smoothie-like drink of bananas, cherries, yogurt, milk and coconut cream. The end effect was little more than a glorified banana milkshake though with only a hint of cherry.

Smooth as an android's bottom?

Sadly, the cooking at Moti Mahal isn’t as accomplished as it used to be. From muted flavours to a lack of texture, it was one disappointment after another. There were occasional glimpses of hope, but at this price, which matches or comes close to matching the prices of esteemed Michelin-starred restaurants, I would expect a far higher and more consistent and accomplished degree of execution. How far the mighty have fallen.

Total cost for one person including soft drink: £61 approx.

2 thoughts on “Moti Mahal review 2 – still as good as ever?”