Eat well, for we rise at dawn-ish

Despite the longstanding Jewish presence in London, there are remarkably few Jewish restaurants of note outside of north London. This makes Mishkin’s, located in Covent Garden next door to The Opera Tavern, all the more remarkable. The food at Mishkin’s isn’t kosher though, the presence of pork on the menu is a glaring example of that, so it’s best thought of as post-modernish Jewish-ish.

This hasn’t dented the popularity of the place though. Despite having only a couple dozen covers, the place is always heaving whenever I walk past, so reservations are essential. The small restaurant has the vague feel of an American diner to it, from the checkered floor to the bar and cosy booths and tables. Service is quick and efficient and I wouldn’t expect anything less from a restaurant created by the same people behind the Polpetto/Polpo/Sputino empire.

The management insists on candlelight at night, which poses challenges and opportunities for snap-happy restaurant bloggers.

I dined at Mishkin’s with The Bastard. At this point I would usually insert a snide comment about The Bastard’s completely unimaginative, bourgeois, meat-oriented meal choices, except this time as some of his picks turned out to be better than mine. I started off with the cod cheek popcorn which wasn’t nearly as exciting as it sounds. The small chunks of slightly chewy cod would have been completely forgettable if it wasn’t for the light and fluffy deep fried batter they were encased in. Some slices of mild chilli peppers also helped, but there wasn’t enough of them. An interesting name, but a rather dull dish in reality.

Everything looks more dramatic by candlelight. Even a dish as boring as this one.

I paired the cod cheek popcorn with some inoffensively mild sauerkraut and an all too-small helping of cauliflower and caraway coleslaw. The thin slices of cauliflower were firm and crisp, while the caraway added a star anise-like flavour. It’s the oddest, but most interesting ‘slaw’ I’ve had in a while.

Don't be afraid, they're only vegetables.

The Bastard was suitably awed by his massive salt beef sandwich served with Colman’s mustard and pickles. There wasn’t quite enough mustard, but each table has its own bottle of the stuff so more can be applied if necessary. I was suitably impressed by the tender strands of flavoursome beef, although there weren’t quite enough pickles and the bread was functional rather than memorable. Still, even a mouthful of the salt beef sandwich was more satisfying than the cod cheek popcorn. 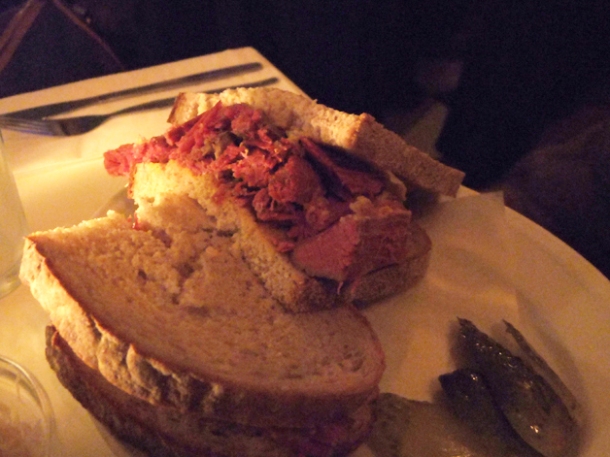 In a unusual display of gluttony, The Bastard decided the salt beef sandwich wasn’t enough meat for one sitting so he also ordered the all-pork hot dog. The huge sausage was firm, juicy and irredeemably meaty. Thankfully the stodgy bread did a good job of soaking up all the juices and there was plenty of mild sauerkraut to add some variation to all that lovely pork. The Bastard’s eyes were clearly too big for his stomach though as I had to help him devour it all. 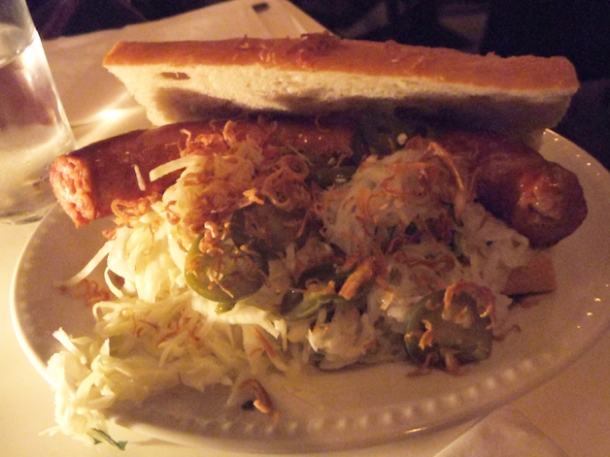 As The Bastard endeavoured to finish his chunk of the all-pork hot dog, I ordered another, smaller dish to help me pass the time since The Bastard, when not wolfing down pork, was more interested in texting than engaging in conversation. I ordered the whitefish and spinach knish which resembled a dumpling or pie, unlike the sausage roll-esque version I encountered at Mile End in New York. I wasn’t expecting much, so I was pleasantly surprised by the soft doughy exterior giving way to lots of firm, salty fish and tangy, sour spinach, the flavour of which was accentuated by the mild, herby parsley liqueur served in a jug on the side. It won’t be for everyone, but I liked it.

Think of knish as a kind of bun.

Despite giving our friendly waiter an insipid and ultimately unfruitful grilling about the lemon drizzle cake (‘is it super special lemon drizzle cake?’), The Bastard seemed morosely uncommunicative about the merits of his dessert, merely shrugging when I pressed him on it.

I was busy wolfing down my own dessert of apple honey blintz, a small rolled up pancake stuffed with apples and honey and then cut into three chunks. Although it could’ve been larger, I nonetheless enjoyed the tangy apples and delicately sweet honey wrapped snugly together in the thin, exceedingly soft pancake which had more honey drizzled on top.

Think of it as a crepe if that helps you.

Mishkin’s isn’t perfect and if my meal with The Bastard is any indication, you’re more likely to get a satisfying meal by sticking with the meat-in-bread dishes than with some of the more quirky mains. Still, there are some tasty gems to be had on the menu which is nothing if not a novel break from the usual run-of-the-mill dining options in and around Covent Garden. A solid four stars.

Total cost for one person including soft drinks but excluding tip: £23-30 approx.