Viewed from the outside it’s hard to imagine that Fleur offers some interesting fine dining in small plates form. Located in the bustling, cavernous mall-like parade of restaurants inside the Mandalay Bay Hotel, the bar and smattering of tables that make up Fleur’s front section looks like a food court. 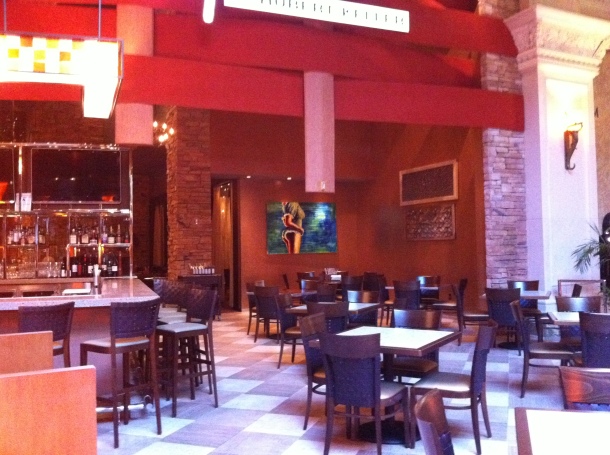 Why yes, that is a painting of a pair of buoyant arse cheeks squeezed into tight denim shorts. What of it?

Venture inside though and it’s far more stylish with candle light, chandeliers that look like tree branches and the obligatory exposed brick walls. Diners who want a little more privacy can pay US$200 for the benefit of a ‘cabana’ – a booth walled off by a white curtain. Thanks, but no thanks.

Every restaurant should have a corset-clad bartender. What, you want a photo you say? What kind of peeping tom deviant are you?!

Although the menu at Fleur consists of small plates, some of them are fairly large by British/European standards. While most dishes are reasonably priced, it is possible to spend some serious money at Fleur. This includes the option to order the entire several-dozen dish menu for US$640, although this is only recommended for parties of six or more.

I didn’t plan for dishes containing raw meat and fish to dominate my meal, but that’s how it ended up. The steak tartare had a fairly chunky grind but it was still smooth. Although it was by no means tough, it wasn’t as tender as other steak tartares I’ve had which suggests the meat could’ve done with a longer pounding/tenderising. The steak’s heavy taste of capers went well with the minced pickles, although the light dusting of chilli powder was too mild for its own good. The crisp flatbread tasted of cornmeal which a little too overbearing when served with some steak on top. Overall, it’s not a bad steak tartare but it’s not as accomplished as the myriad flavours of the delightfully tender steak tartare at Tasquita d’Enfrente in Madrid. 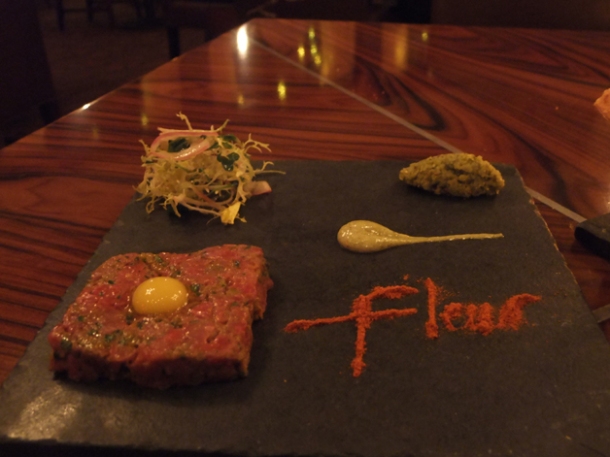 It’s going to take more than calligraphy with chilli powder to impress me.

I’m a big fan of ceviche, a South American dish of citrus marinated raw fish, so I was keen to try out Fleur’s version. Its arrival at my table was quite dramatic with the dish of fish perched upon a frothing bowl of dry ice. Beyond its eye-catching presentation it was a disappointment though. While the marinade was suitably zesty and refreshing, the chunks of white fish not seemed only tasted bland and uninteresting but I could swear it was cooked too. I also wasn’t convinced by the addition of guacamole and tortilla chips, which seemed like unnecessary distractions.

I foresee a disappointing ceviche in your near future…

Yup, I was right.

Another unusual raw fish dish were the tuna tacos. These three miniature tacos used chunks of raw, sashimi-grade yellowtail tuna to great effect. The smooth, glossy, sweet flesh was joyful and its texture was reminiscent of a Turkish delight. There’s a great of deal of contrast between the soft fish and the crisp, brittle taco shells. I wasn’t convinced by the addition of avocado and what I think were shavings of daikon radish, while the fish is almost identical to the kind used at Mix. Still, while not flawless it’s an interesting dish and is apparently the most popular at Fleur.

These aren’t your father’s tacos.

The non-raw main dish of the evening was the fig flambé. Here the figs, the odd fleck of pancetta and some blue cheese had been flambéd on top of a crisp, vaguely naan-style flatbread and a fairly large flatbread at that. The figs were gooey and slightly sweet which went well with the melted, mild Roquefort-esque blue cheese, but there was far too little of these toppings given the wide expanse of bread. I seemed to spend far too much time chewing carbohydrates rather than actually tasting the combination of figs and cheese.

The menu descriptions at Fleur can be deceptively modest. For instance ‘affogato with Bailey’s ice cream’ seems very straightforward – an Italian dessert combining coffee and liqueur-flavoured ice cream. Except at Fleur the Bailey’s ice cream is prepared at your table using liquid nitrogen right before your very eyes. Thankfully, my charming, friendly waitress had a very steady hand.

While the preparation is certainly eye-catching, the affogato was too unbalanced for my taste. The sea of Bailey’s ice cream drowned out the flavour of the already weak coffee. Disappointing.

A vase of affogato.

Despite the large size of the affogato, I somehow still had room for one more dish so I chose a second dessert – the pb&j or peanut, butter and jam. Again, this description is deceptively simple. What arrived were three French-style macarons flavoured with peanut butter cream and a small dollop of freeze dried strawberry jam. Each macaron was paired with a small shot of iced rum milk. 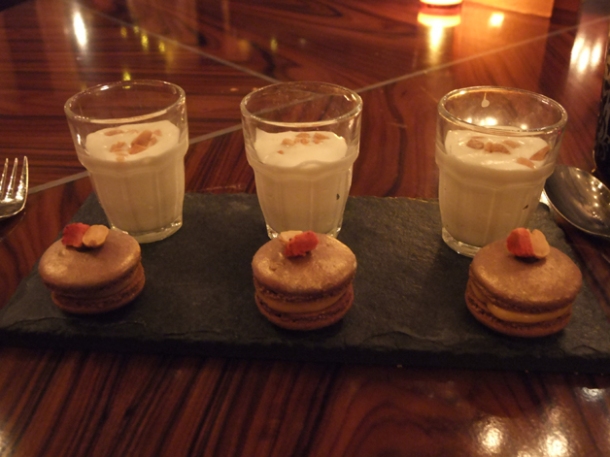 While the peanut butter cream effectively captured the nutty taste of that childhood foodstuff, the macaron was far too crispy and crunchy. I prefer macarons with a slightly crisp crust leading to a soft, gently chewy interior, such as those available from Fauchon or Laduree in Paris. The small freeze dried drip of jam was too small to leave an impression. Much more successful was the iced rum milk which was gently boozy and had a surprising denseness to it, almost resembling whipped cream more than milk. Overall, while I liked the whimsical idea behind the pb&j, the execution was too inconsistent to make a truly delightful dessert.

There’s no denying that dining at Fleur, especially with friends, is a memorable experience with food that is certainly inventive and interesting. However, apart from a few highlights the actual execution of the dishes doesn’t live up to the ambitious ideas behind them though, which just isn’t good enough at this price. Three stars.

Total cost for one person excluding tip: US$85 (approx. £52 at the time of writing)