Even though renowned French chef Alain Ducasse has a well-regarded restaurant at London’s Dorchester hotel, I have yet to make my way there. I have managed to dine at Ducasse’s Las Vegas establishment though, the succinctly named Mix.

As expected for a restaurant on the Las Vegas Strip, Mix is located in a hotel – the top floor of the pretentiously named THEhotel (part of the Mandalay Bay) to be precise. This location gives it commanding views over the Strip which look great at dusk or at night, but if you ever grow tired of the view, there’s the striking décor to keep you amused. From the UFO/pod-like staircase to the jellyfish-esque glass structures dangling from the ceiling, it all looks quite cool without descending into the ostentatious vulgarity that pervades the rest of Vegas. 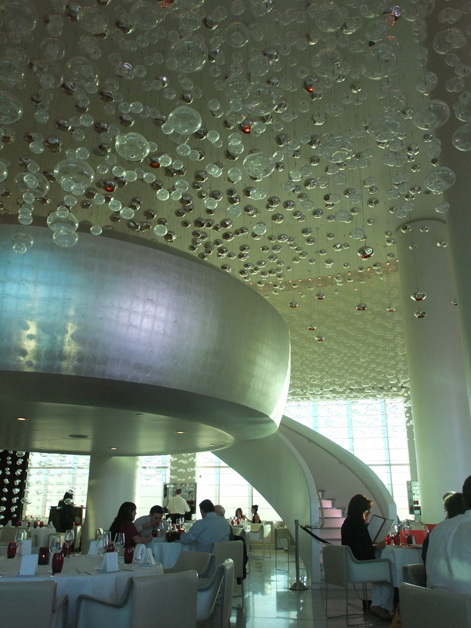 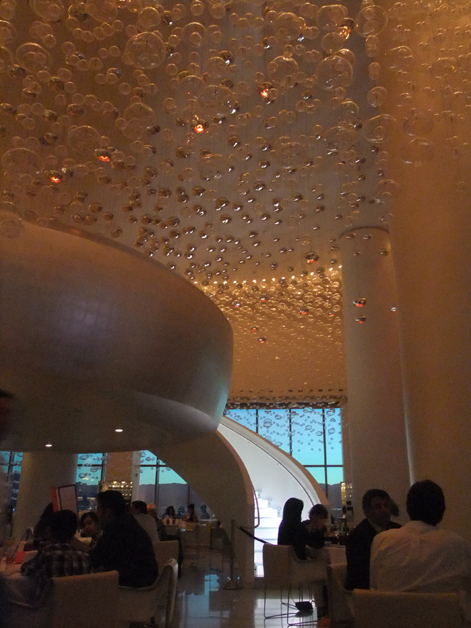 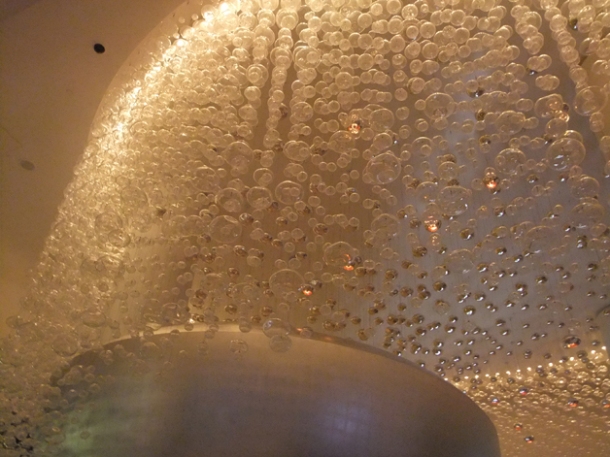 As well as an a la carte menu there are two tasting menus and I opted for the $120 grand tasting menu. Although Ducasse is French, the grand tasting menu isn’t completely Gallic and has some Asiatic hints to it. The amuse bouche is a prime example, consisting of essentially raw sashimi-grade yellowtail tuna topped with a mousse-like avocado cream. Although the tuna was a bit too chilled to allow the flavour to really shine, it did have a delightfully smooth, glossy texture to it – almost resembling a Turkish delight. I wasn’t convinced by the subdued tasting avocado cream, but the seductive texture of the tuna was enough to make up for it. 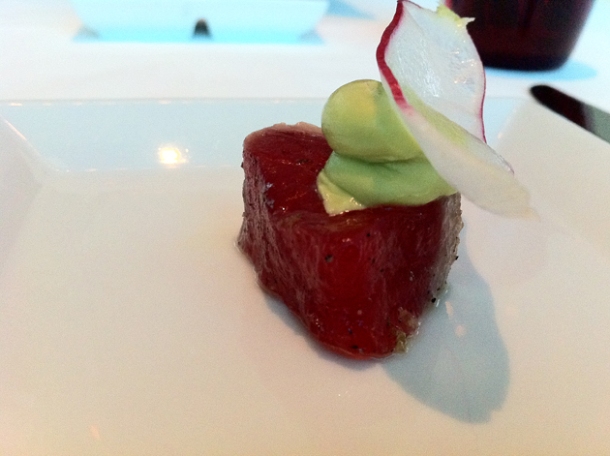 You amuse me, little one.

The wait between courses was sometimes a bit lengthy, but I managed to keep my mouth amused with the bread basket. The only real standout in that bowl of carbohydrates was the red pepper focaccia which had a surprising aniseed hint to it that I enjoyed. Alongside the very creamy, lightly salted butter was an unusual nut spread that tasted like a very soft, sweet peanut brittle that went brilliantly well with the other, fluffier bread rolls. 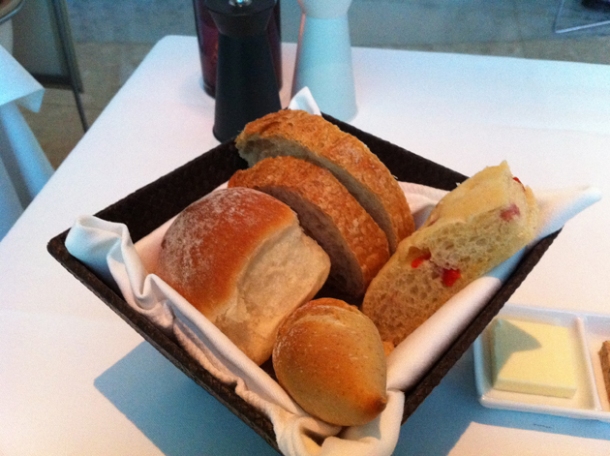 What exactly is in this bread basket? That’s on a knead to dough basis.

Gnocchi served with asparagus and mushrooms may not sound especially exciting but this dish turned out to be the highlight of the evening. The gnocchi were unbelievably light and fluffy with a gently chewy, gummy texture to it that may sound odd but was utterly beguiling. The vegetables were well chosen from the tender yet crisp asparagus to the firm, stringy enoki mushrooms and the other wrinkly, sliced mushrooms that I couldn’t identify. Despite appearances it’s not for vegetarians or vegans due to the veal jus and shaved parmesan. Nevertheless, Mix has now ruined all other gnocchi for me – this version is truly superb. 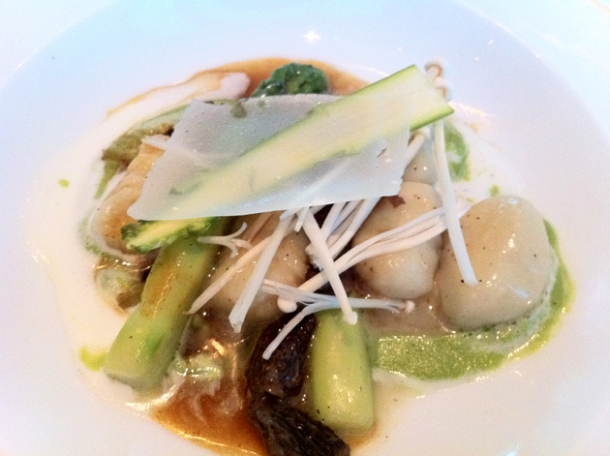 The best gnocchi I’ve ever had.

In an inventive take on the ‘surf and turf’ combination of lobster and steak available at some restaurants, Mix pairs a roasted Maine lobster curry with a filet mignon. Lobster curry may sound odd, but the sauce will be instantly familiar to anyone who’s ever had a red Thai curry although there were some intensely sweet, but small grape-like fruits scatted throughout that I couldn’t identify. The lobster tail and claw meat was fresh and tender, yet it also had a gently chewy bite that was very pleasurable. I’m not convinced by the relatively large grains of rice which didn’t clump together. All-in-all it didn’t quite come together as a coherent dish in its own right, but the enjoyable texture of the lobster more than makes up for it. 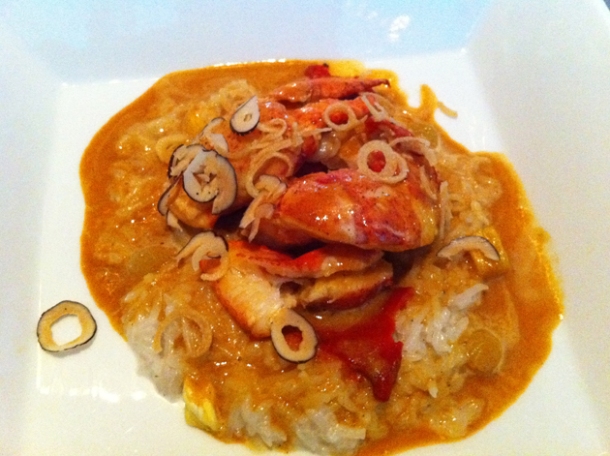 Don’t attempt to curry favour with me.

Compared to the lobster curry, the filet mignon seems positively traditional. The beef was cooked medium rare, as recommended by my waiter, but seemed relatively tough to me rather than meltingly tender as I had expected. Compensating for this was the dark, sweet, nutty sauce (almost certainly truffle-based) and the soft, fatty, layered slab of foie gras oozing all over the meat. The black truffle shavings weren’t as fragrant as I was expecting, but they did help accentuate the nuttiness of the sauce and added a bit of texture to the very smooth, creamy, mashed potato. While not perfect, it’s still a good steak but it won’t displace Hawksmoor from my affections. 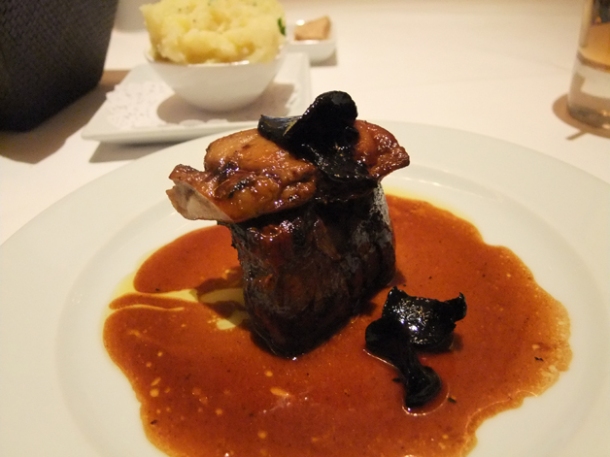 Why yes, my loins are tender, said the cow. 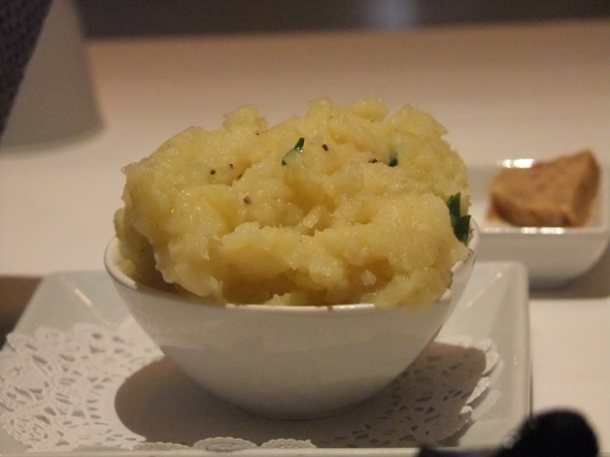 Dessert turned out to be multi-tiered affair. First there was the pre-dessert, a mango and passion fruit purée topped with coconut foam and served in a cocktail glass. It’s very boldly flavoured which in this case might be a bad thing – the creaminess of the coconut seemed to clash with the tartness of the passion fruit. Still, I won’t be forgetting it anytime soon. 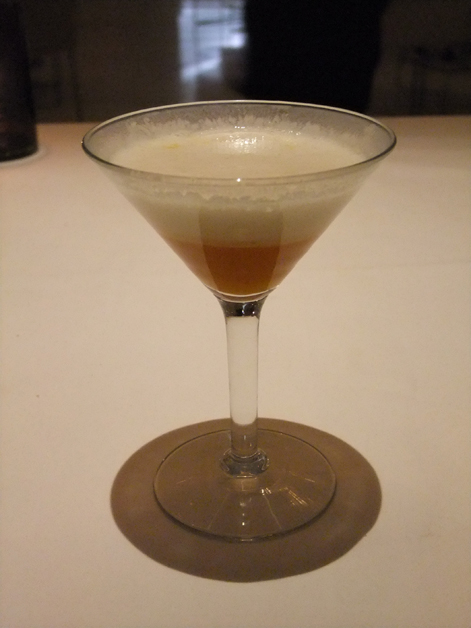 The main dessert was a deconstructed ‘Monte Carlo style’ baba au rhum. The plain, but fluffy, airy slices of cake can be topped with as much, or as little, of the very boozy rum and surprisingly bland vanilla cream as you like. I had to go easy on the rum, so the whole dish seemed rather plain to me. Diners at other tables seemed to enjoy its simplicity, but I don’t think it’s my kind of dessert. Interesting though. 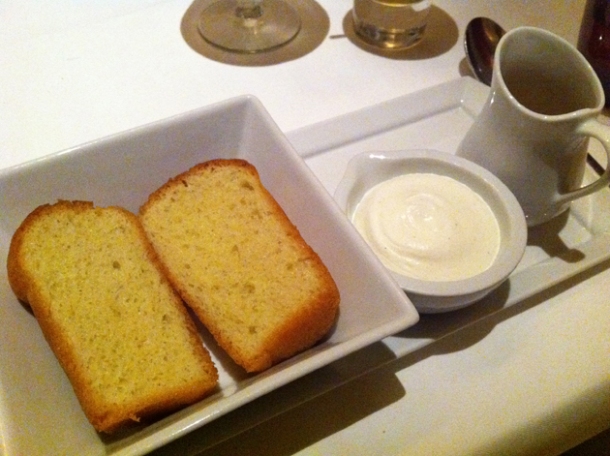 That should have been the end, but my friendly, chatty and informative waiter brought over a complimentary post-dessert, a madeleine served with a chocolate dipping sauce. The sugary miniature cake had a slightly crisp crust to it, but wasn’t as buttery or rich as I was expecting. The chocolate sauce was also a surprise – its thick paste-like texture and nutty flavour reminded very strongly of nutella. Not bad for a freebie, but I’d probably think differently if I had paid for it. 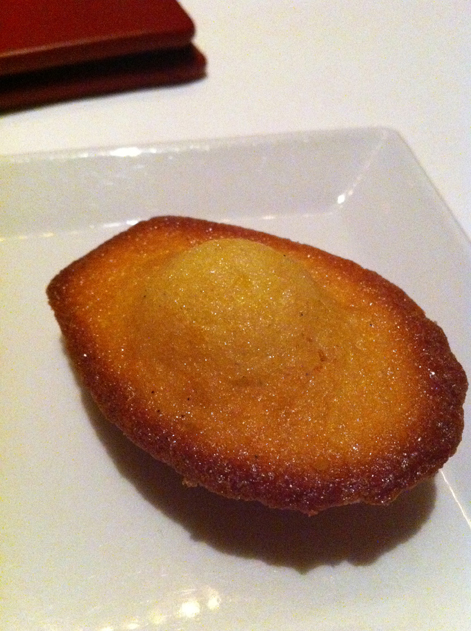 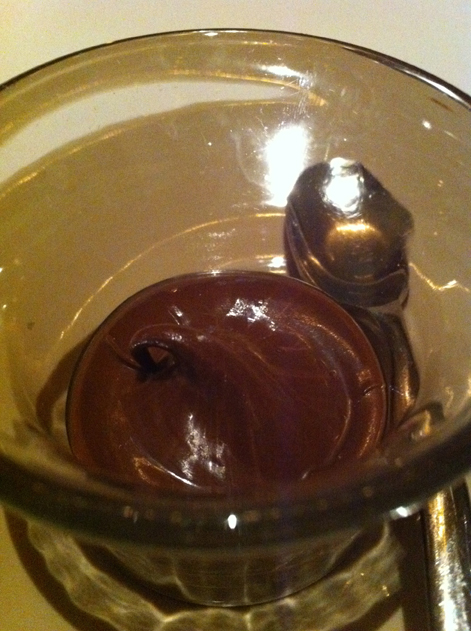 …into this. Or at least that’s what I did.

Sadly the iced tea for wetting my whistle was a disappointment. It was very watered down with almost no character.

Service was, as I’ve already hinted at, effortless in its charm and warmth which is to be expected at this price. Somewhat unexpectedly, a friendly fellow diner at a neighbouring table who semi-complained/inquired about the unusual nature of her chocolate soufflé got the price of the dessert subtracted from her bill – entirely on the initiative of the waiter. If only everyone at Mix was as thoughtful. The other diner (you know who you are) in a Hugo Boss suit who kept glowering at my lowly TM Lewin rags can piss off – if you don’t like the cut of my jib then buy me a new one you sanctimonious arsewipe.

If I was judging Mix purely on the basis of the gnocchi, I would be giving the place an unconditional recommendation. Sadly, the rest of the meal wasn’t quite as polished as that particular highlight. It was far from being bad, but at this price I’d expect consistent excellence rather than just smooth accomplishment with highlights of excellence. Four stars.

Total cost for one person including soft drink but excluding tip: US$141 (approx. £86 at the time of writing)

One thought on “Mix review – top of the world dining?”