Update: this restaurant has now closed.

Posh-as-corsets Mayfair may seem like an odd place for a Lebanese restaurant, but Fakhreldine isn’t some dodgy cafe with more hookah pipes than customers. It’s a years-old establishment with an attractive, elegant decor even if it does verge on resembling an inoffensively posh first-class airport lounge at times. Most striking are the views overlooking Green Park, although to take them in while dining you need to ask for one of the handful of park view tables when booking.

I neglected to do this, but I was nonetheless still content thanks to the company of the Flame Haired Squelchie. The Squelchie was the ideal companion for this meal as she can cast a wide eye over Fakhreldine’s extensive vegetarian options and she’s the closest thing I have to an expert on Levantine cuisine given her Eastern Mediterranean heritage.

The menu at Fakhreldine is divided into a large selection of mezze, or small plates, for sharing and a smaller choice of more substantial main dishes to savour all by oneself. We decided to order a fairly broad selection of mainly vegetarian mezze for the Squelchie, which I naturally dipped into occasionally, and a more meaty main course for myself.

Sadly the one meat mezze I wanted to indulge in was not available on the night of our visit. Kibbe nayeh consists of balls of raw lamb meat rolled in cracked wheat and was done particularly well at the now-closed Adonis on Goodge Street. Disappointingly, it’s only available at Fakhreldine on Mondays when it’s ‘delivered fresh’ in the words of our waiter, suggesting it’s prepared off-site.

I had to settle for the makanek, a bowl of surprisingly delicious lamb and cumin mini sausages. Although the cumin’s presence was strongly felt, it didn’t drown out the bold, hearty, stocky flavours of the meat. The sausages had a surprisingly smooth texture, I was expecting a much coarser feel, but that hardly matters. The very bold makanek might have been too overpowering and coronary-inducing as a main course in its own right, so it’s well-suited for mezze duty.

Don’t bother with the lime juice.

The Squelchie and I have diverging opinions when it comes to falafel. I prefer a softer bite, whereas the Squelchie prefers a harder, crunchier exterior, no doubt due to her unnaturally pointy teeth. Fakhreldine’s version of this well-known classic somehow managed to please us both with an exterior that wasn’t too hard nor too soft and had a reasonably fluffy interior too.

Moussaka is an aubergine dish common in various guises throughout numerous Mediterranean cuisines and should need no introduction. Here it has a hearty tomato-based sauce covering the aubergines and chickpeas both of which are very soft. This worked fine for the aubergine which still managed to hold onto its distinctive flavour, but the chickpeas were too soft and too bland for my liking. The Squelchie seemed pleased with it though. 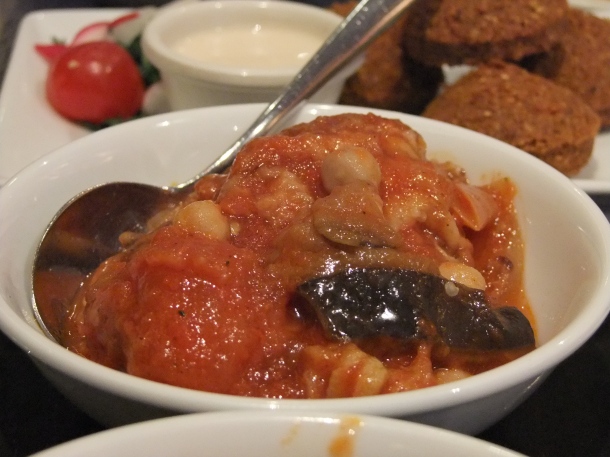 Moussaka with falafel in the background. Surely everyone knows what falafel looks like nowadays?

An intriguing dish was the makdouse or walnut-stuffed oil-cured aubergines. There was hardly any walnuts in our aubergines, but there was plenty of tomatoes and spring onions tossed in. The aubergines themselves were firm and tart with a pickled taste that I enjoyed, even if it was a little one-dimensional.

Hummus and bread may not sound terribly exciting, but Fakhreldine does them well. The large puffy pita-like bread was perfect for scooping up the thick, creamy hummus that somehow has a much more layered taste that captures the chickpea flavour better than the supermarket stuff.

We could have done with more bread as it also proved handy for scooping up the fattoush salad. Although fancy sounding, this is merely a salad of tossed greens, tomatoes and radishes served with a large dose of vinegar. Simple, but refreshing. 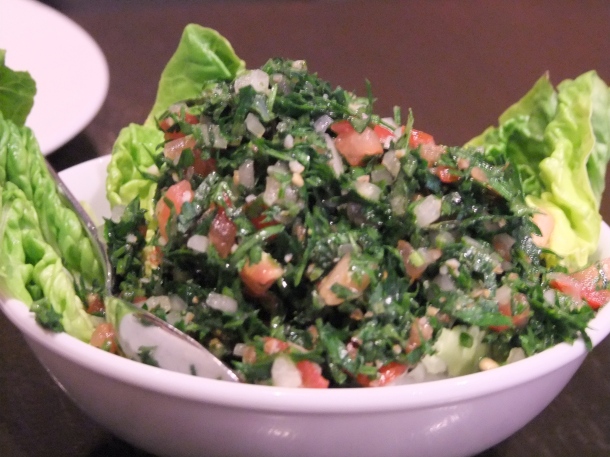 The Flame Haired Squelchie has an undying obsession with okra so she naturally ordered the bemieh bil zeit or okra cooked in a tomato, garlic and onion sauce. She enjoyed it a lot. I had more mixed feelings. The okra was tender with a peppery flavour and more tomato sauce than you could shake a fork at. The sauce itself didn’t effectively complement the okra though. Neither did it come across as a coherent whole, more a random ragbag of pureed vegetables. The whole cloves of soft, tender garlic was an intriguing highlight though – the distinct taste didn’t overwhelm the rest of the dish.

By this point the Squelchie was satiated, rubbing and patting her belly contentedly. I still had my main course to look forward to – the five spiced lamb. The shank of lamb served on the bone was tender and nutty, but whatever five spices were used seemed far too muted to be noticeable. The accompanying bukhari rice was surprisingly much more interesting than the lamb. The medium-sized grains of rice clung together and struck a nice balance between nuttiness and gentle sweetness. 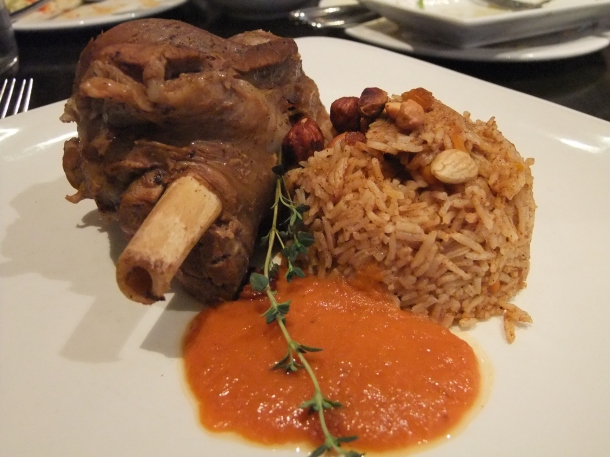 I don’t drink booze and the Squelchie was off the plonk, although she was sorely tempted by the selection of Lebanese wines which she enjoyed on a previous visit. The Euro Hedgie would probably scoff at the very idea of Lebanese wines, but the Squelchie thinks they’re underrated and well worth trying, especially the reds, and they’re otherwise hard to find apparently.

We both wetted our whistles with the jallab instead , a soft drink consisting of crushed ice, date syrup, grape syrup and pine nuts. Despite the copious amount of ice, the drink is thick, syrupy and very sweet. Although the Squelchie claimed to be able to taste the grape syrup, I couldn’t make it out. The drink seemed dominated by the taste of dates and rosewater with lots of pine nuts drifting to the bottom of the glass. Definitely worth having, at least once.

The Squelchie was watching her hourglass figure, so she skipped dessert but I opted for the katayef, described as a pair of ‘pancakes’ on the menu. The first was filled with deliciously sweet caramelised pine nuts, although the pastry was rank and resembled a McDonald’s fruit pie that was long past its shelf life.

Nestled in between the two ‘pancakes’ was some halva, a paste that’s usually quite crumbly and made from tahini, but here it had a whipped-cream like texture that was very pleasing even if its flavour was a little indistinct.

The second pancake had a soft syrupy pastry exterior filled with an incredibly soft pistachio/almond halva liberally flavoured with rosewater. Delightful. The accompanying ice cream wasn’t quite as successful, resembling a watered down dulce de leche. Although it had its highs and lows, the katayef was a success in my opinion.

The Squelchie thinks the positioning of the pastries looks slightly suggestive. I think she has a filthy mind.

Service was patchy. The receptionist didn’t offer to take our bags and jackets, despite the obvious presence of a cloak room. Service at our table was also initially quite slow and our waiter, although helpful, had the demeanour of a council estate wide boy which you’ll find either charming or off-putting.

Service issues aside, the Squelchie and I had a very pleasant evening at Fakhreldine. The quality of the food was a little inconsistent, but there are some flavoursome and well-prepared dishes to choose from. You’re definitely paying for the benefit of the Mayfair, parkside location though – at £50 per head without alcohol Fakhreldine costs the same as other restaurants with more professional service and consistently excellent food that’s also inventive too. Fakhreldine is a good way for those new to Lebanese food to try it out, but I’d be surprised if there aren’t better, cheaper Lebanese restaurants in London. At this price, it’s just not great value – three stars.

Reservations: probably a good idea – for a table with a park view, essential.

Total cost for one person including soft drink: £50 approx.