Will I be impressed on my second visit to the gastropub that has Tower Bridge as a neighbour?

I’ve been to the Tower Bridge branch of The Draft House before with The Jolly Giant, the Lensman, Wicket, the Youngling, the Griddler and Bohemian Rhapsody. Although I was underwhelmed, I suspected I would return since my frequent dining companion The Euro Hedgie lives nearby. This prediction turned out to be true as I found myself at The Draft House with The Euro Hedgie on a weekday evening.

On my first visit I dined in what turned out to be the bar room. This time around I dined in the slightly more formal dining room which I didn’t even notice on my first visit. It consists entirely of booths and is decorated with an eclectic collection of posters and memorabilia. The menu is seasonal, but one constant appears to be the scotch eggs which the Hedgie tried on my recommendation. He was just as impressed with them as I was – they’re clearly one of the best things on the menu.

I started with the devils on horseback, an unusual-sounding dish consisting of prunes wrapped in bacon. Although some versions of the dish have the prunes pitted and filled with something like chutney, that wasn’t the case here. Although the Hedgie was unimpressed, grudgingly admitting that it wasn’t his sort of dish to begin with, I liked it. I enjoyed the tangy sweetness of the prune paired with the salty meatiness of the bacon. A success if you ask me.

Why are they called devils on horseback?

For his main course the Hedgie made a surprising choice of macaroni and cheese. I expected him to choose something a little more adventurous as he usually does, but his rationale was that he wanted to see how The Draft House managed a simple staple. He seemed suitably satisfied by the creamy stodginess of the mac and cheese. 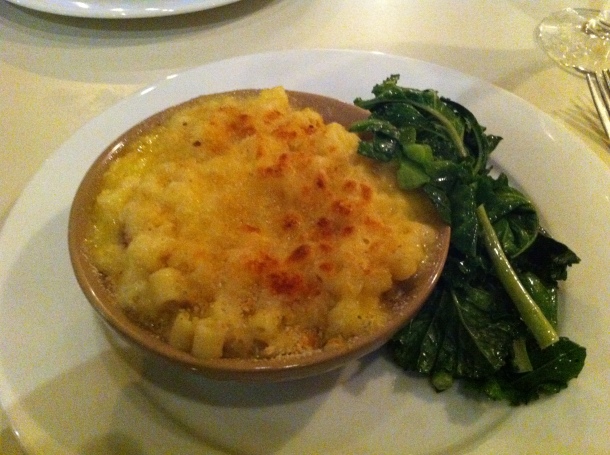 Not my kind of dish, but apparently it’s quite good.

I opted for shoulder of lamb paired with greens and potatoes. The vegetables were fine, but the meat was a grave disappointment. We suspect it had been cooked for too long resulting in the meat being far too soft, losing much of its texture and flavour. The Hedgie went so far as to condemn it as ‘Wetherspoons-quality’. While I wouldn’t be quite as harsh, it was easily the weakest dish of the whole evening.

As a side dish the Hedgie ordered some onion rings. Although they’re still not quite as good as the onion rings at Byron, they were much improved over the rings I had on my last visit. The batter was no longer excessively oily and was much fluffier, although it also tasted a touch bland and the whole ring of onion in the centre was a little soft for my liking. Not bad.

Onion rings. Surprisingly hard to do.

The Hedgie passed on dessert, but I decided to go for the sticky toffee pudding which came with a dollop of vanilla ice cream. Sadly the loaf at the centre of it all lacked the tangy sweetness, nuttiness and denseness needed to hold the dish together relying almost entirely on the toffee sauce and ice cream for flavour. A rather unbalanced dessert.

Could’ve been so much better.

Sadly the root beer which I enjoyed on my previous visit was out of stock so I had to be content with a vial of diet Coke. The Euro Hedgie’s first choice of Inedit, a beer developed in part by El Bulli supremo Ferran Adrià and rarely seen in the UK, was also out of stock. He instead chose his usual poison of Kwak, a Belgian beer he grew very familiar with during his voluntary exile in the Netherlands. It’s a little concerning that a gastropub should be bereft of some of its more intriguing drinks.

My previous verdict of three stars for The Tower Bridge Draft House still stands. From my experience most dishes are disappointing or merely average save for highlights such as the scotch eggs and the devils on horseback which are part of the sharing plates section of the menu. The Draft House is still a very respectable drinking pub, so if you need a nibble then it’d be best to stick to those sharing plates. For something more substantial, the nearby Dean Swift would probably be a better bet.

Total cost for one person including soft drink: £28 approx.