There’s no shortage of Jewish restaurants and cafes in New York, but the Mile End Delicatessen is a little different as it’s billed as a ‘Montreal Jewish delicatessen’, although I’m not sure how that differs from the traditional New York variety.

To a British person a delicatessen means a shop that sells fine cheeses and cured meats, so the Mile End Delicatessen is a bit of a surprise since it’s really a small diner. There are just three tables that could seat up to around six people each and a small bar that can seat an additional five people facing the small kitchen. The small number of covers means you’ll need to arrive early to grab a table without waiting, but it’s well worth doing so.

The small kitchen also means a small menu with different dishes for breakfast, lunch, weekend brunch and dinner. I was lucky enough to grab a seat at the bar on a busy weekend evening and promptly ordered some knish, a traditional Jewish pastry that resembles a sausage roll. I’ve never had knish before, but Mile End’s version seemed rather tasteless and uninteresting to me. The pastry was crisp, but the generic meat, potato and onion filling tasted bland, even when dipped with liberal quantities of the gently piquant, but ultimately mild-mannered mustard accompaniment. 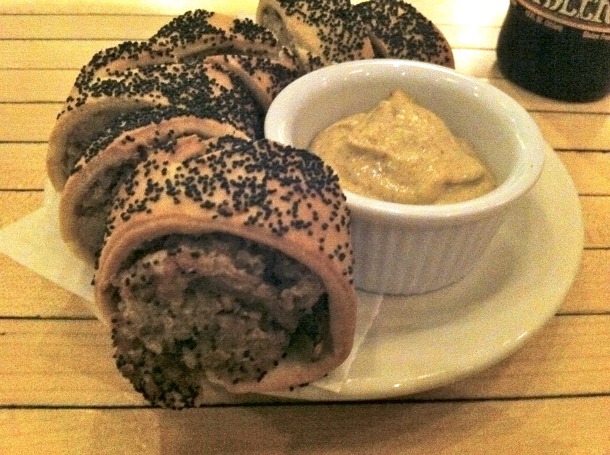 Far more enticing was the poulet juif (or Jewish chicken for all you non-Francophiles). The succulent meat was incredibly tender and melted in the mouth in a way that almost resembled roast pork. The hearty, stocky broth drizzled over the chicken gave the thigh meat a slightly tart, salty taste that was incredibly moreish while the taut, waxy chicken skin was supple and went down a treat. The deliciously soft meat was complimented well by the firm fava beans and plentiful cabbage. It may sound simple, but it’s very satisfying and is the best chicken dish I’ve had to date. 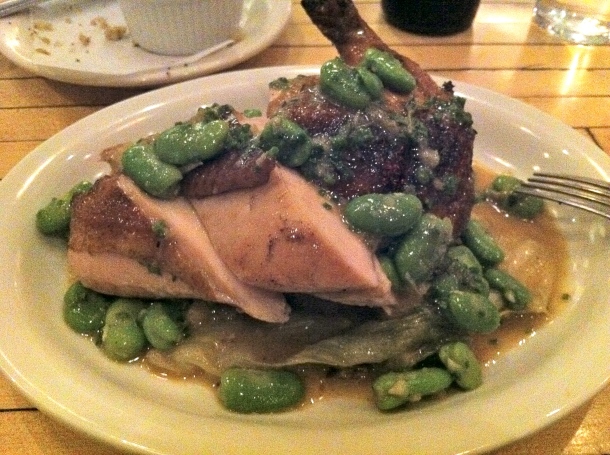 Given the rather cramped kitchen, which had room for no more than two or three staff at any one time as far as I could see, I wasn’t expecting much from the dessert. I was convinced that they couldn’t rustle up a decent pudding, alongside that excellent chicken, in such a small space, but the chocolate cake was a pleasant surprise. The use of dark, bittersweet chocolate was complimented well by a drizzling of sour cream and crushed pistachios. The texture was moist, soft and ganache-like, which I suspect was due to the absence of flour since it greatly resembles the flowerless chocolate cakes I often bake myself. It won’t set the world of desserts alight, but it was a pleasing finish. 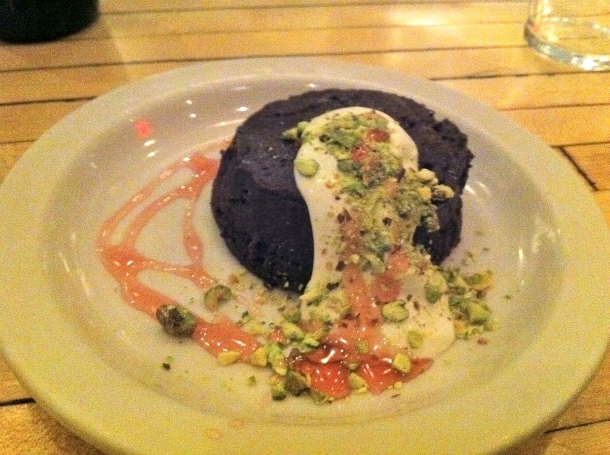 I washed it all down with root beer, my favourite American soft drink. The brand served here, Virgil’s, had a very distinct sassafrat-ish taste that wasn’t sickly sweet and was also subtly creamy. I was beginning to think my fond childhood memories of delicious root beer were just rose-tinted, nostalgic delusions, but this was the best root beer I had during my New York trip.

Ahhhh, that hit the spot.

Service was generally polite, helpful and informative. The only faux pas was having my conversation with a fellow diner interrupted by a waiter asking if I wanted some dessert. I appreciate being asked, but the timing could’ve been better buddy.

Although the knish was disappointing, my only real regret was not being able to visit Mile End again for a taste of the promising-looking beef brisket which I saw being sliced up in the kitchen. If you’re not a vegetarian and you find yourself in Brooklyn, you owe it to yourself to seek out Mile End and try the poulet juif – it really is superb.

Opening Hours (this gets complicated):

Total cost for one person including soft drink, but excluding tip: $35 (approx. £22 at time of writing)