Not nearly as cliched as you might think at first glance

Stop me if you’ve heard this one before. A fine dining restaurant with a much-vaunted chef at the helm has opened in leafy, wealthy zone 1 West London and serves dishes based on seasonal British produce. If that sentence of postmodern London restaurant cliches is enough to drive you away to Buzzfeed for a quiz about cats, then I understand. Fine dining tasting menu restaurants are almost as common in this part of town as Chelsea tractors and aspirational leggings. At first glance, Core by Clare Smyth doesn’t seem terribly interesting. Look a little deeper though, beyond the initial PR cliches, and it’s far more intriguing.

But, first of all, let’s get the obvious stuff out of the way. Core’s most immediately notable quality is that it is headed by a woman. Clare Smyth forged her considerable reputation working for a certain well-known celebrity chef. Y’know, that blonde sweary one who’s always on the telly and in the blacktop tabloids. In a better world, her gender would go unmentioned. But we live in a bizarro patriarchy where women are still, by default, expected to be the cook in most households. Yet the very idea of more women becoming head chefs in high-end restaurants is still met with infantile naysaying by some of their male peers. Smyth has succeeded in a society and in an industry where such unthinking obstinacy is still commonplace. That takes a certain kind of grit and determination that few people possess, whatever their gender.

Core is located in Notting Hill within the premises formerly occupied, a few years and two restaurants ago, by the Notting Hill Brasserie. The basic layout of the place hasn’t changed too much as far as I could see, but the atmosphere was very different indeed. The airy and spacious rooms were lit brightly, but not too harshly. A Dad music soundtrack of 80s and 90s easy-listening (think Tracey Chapman), a lack of tablecloths and an overall lack of overweening formality encouraged a laidback atmosphere. Core has largely avoided the stilted hushness of most gastrotemples, but the bubbling chatter never become cacophonous enough to drown out one’s own conversation either.

Core also distinguishes itself from its predecessor in being far more friendly and gracious in its service. Despite being a little late, I was nonetheless warmly welcomed and ushered to my table without further delay – little things that the Notting Hill Brasserie seemed incapable of mastering. The service could still do with further breaking-in though. From a somewhat stilted manner to a constantly rotating array of faces among my waiters, the service lacked a little bit of that human touch.

Although there are shorter tasting and a la carte options on offer, the seven-course tasting menu is clearly the main attraction here.

All of them kick off with amuse bouche which, on the night of my visit, included a fluffy tomato and basil ball which had a titillating parmesan-ish umami to it. 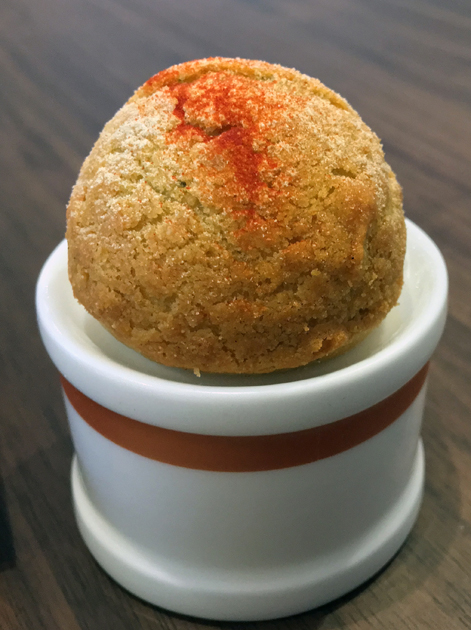 A trio of amuse bouche were presented together. A gently smoky and herby morsel of jellied eel tasted more herring-ish to me, but no less delightful. A sharp and chewy citrusy peel was a natural counterpoint to a meaty, smoky and lightly crisp slice of duck – a clear tongue-in-cheek reimagining of duck a l’orange in my book. 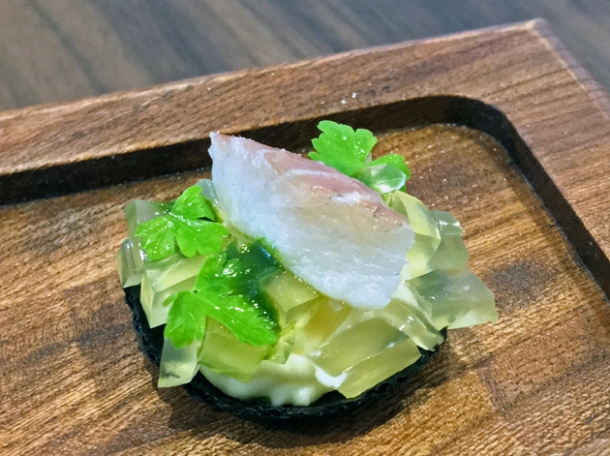 Serving board included in shot to give you an idea of the size. i.e. it’s small, as an amuse bouche should be. 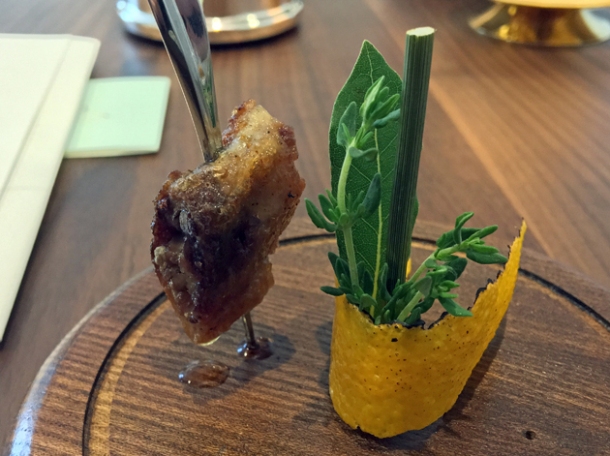 Dense and satisfyingly tangy wedges of sourdough came with a bowl of butter bigger than the bread itself. Topping the bread with butter was more akin to a balancing act than spreading. This was due to the butter’s airy and wispy texture that was almost like that of cottage cheese. It was worth doing though, given its subtle but nonetheless pleasing lactic tang. 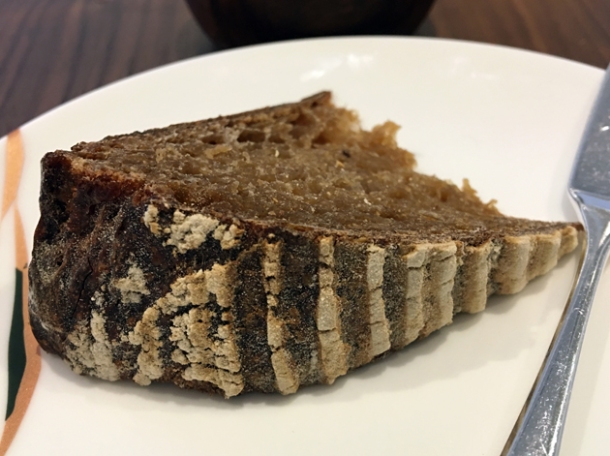 Apparently a basket of bread is too much to ask for, but at least my bread plate was topped up regularly. 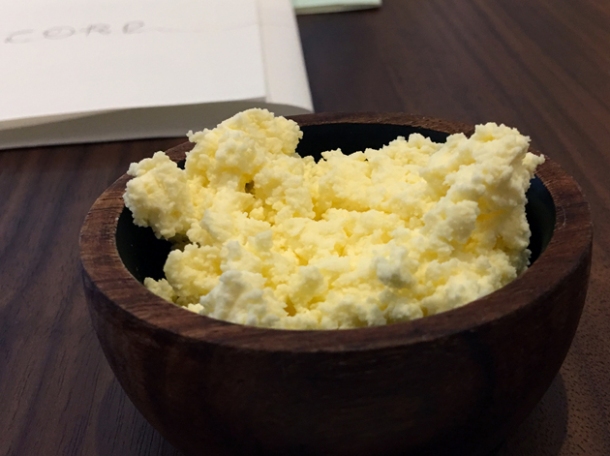 They say only the good die young.

The most satisfying part of the Crab Royale by far turned out to be the aromatic cream, resplendent with the scent of tidal surf and what smelt like dill. The crab meat itself was too subtle for its own good, with the textural pleasure of claw meat conspicuous by its absence. 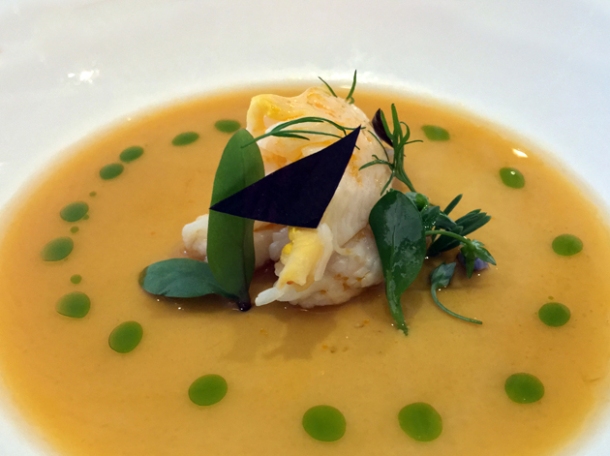 I’m still mesmerised by that little triangle of pitch black.

Scallop smoked in the shell was texturally pleasing in its smooth firmness. Most of the sea scent, smokiness and herbiness was in the sauce of minced scallop roe though, rather than the mollusc itself. Still, as long as you take the two together than this dish was a winner overall. 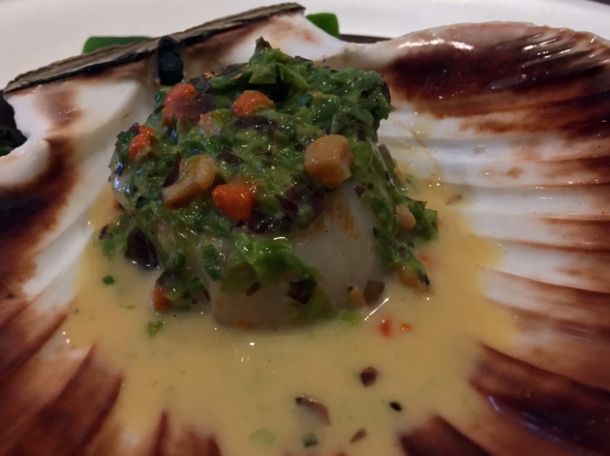 A thick slice of potato came bathed in a buttery sauce of fish roe and dill. The sauce was initially quite muted, but it did eventually build up to a crescendo of rich creaminess and umami sea saltiness. It was a tad too little and too late, but there’s the core of a good idea though in using starchy, neutral tubers to deliver far more potent flavours. 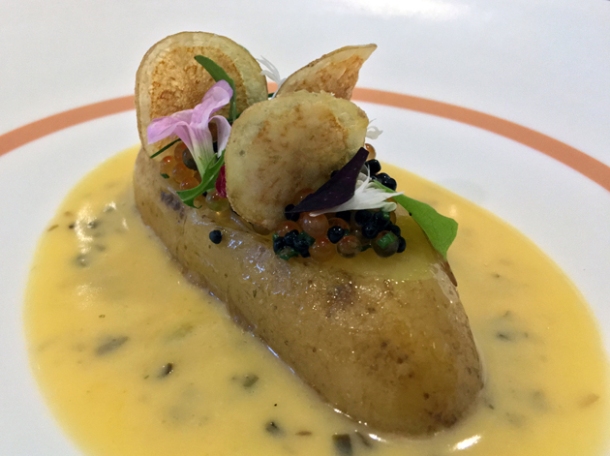 A light yet meaty slate of skate was cooked just so. The potted-style shrimp left me unmoved, leaving it to the lightly umami and herby squid and butter sauce to pick up the slack. Although far from bad, even the potent combination of butter and seafood can become a little repetitive with three variant iterations one-after-the-other. 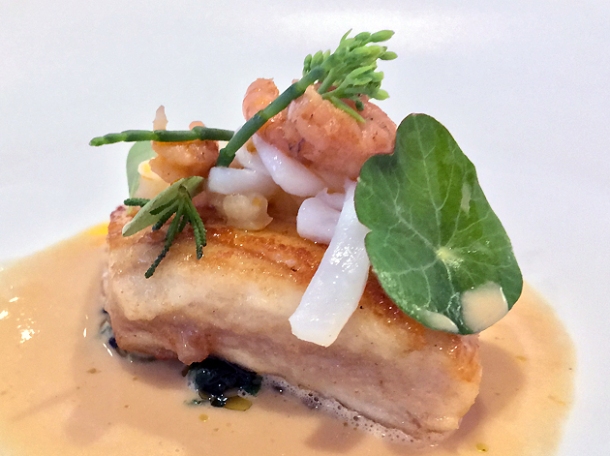 Skate to where the puck is going to be.

The ‘main’ course, if there is such a thing in a tasting menu, wasn’t a chunk of meat as it so often is. In a theoretically elegant inversion of a roast dinner, a singular chunky carrot came glazed in lamb stock. The practical upshot was less neat than the theory. The carrot failed to standout, while the sticky glaze didn’t make its presence felt until late in the game with a cloying umami that coated the palate as it hit the back of your mouth. While this explained the purpose of the refreshing yoghurt, there wasn’t quite enough of it to counter the thirst-inducing side-effects of all that late-stage umami. The most uniformly successful part of this dish was the little bun on the side. It was not only good for soaking up errant meat juice, but was a delight in its own right with a crisp yet yielding focaccia-like bite and a centre of tender and sinewy if somewhat muted lamb. 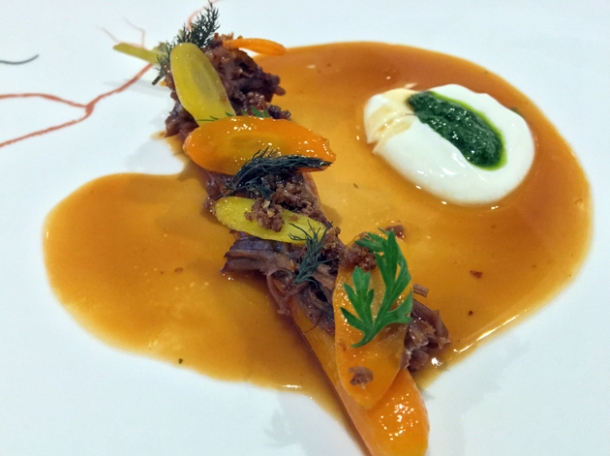 Bun out of shot.

The yoghurt needed some help in cleansing my mouth of the errant umami from the lamb glaze smothering my palate. That help came in the form of what was described to me as a lemon parfait (presumably made in the French-style). While cool and refreshing, it lacked the sweet and sour tang that I’d expect from a lemon-based dessert. Those qualities came instead from the smooth cherry centre, qualities emphasised by the herby garnish. Despite what initially appeared to be a middling start, this was an accomplished pre-dessert overall. 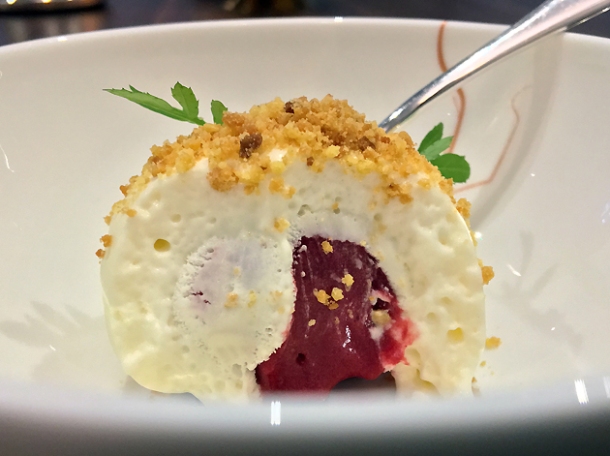 Red and white is a classic colour combination for a reason.

Technically well-executed meringue came filled with a bracingly cold pear sorbet that was true to the fruit in its sweetness and sharpness. The sorbet was covered in a tessellation of similarly-flavoured discs of pear tinged with a herbiness that had the clarity of mint but with a sour edge to it. The latter gave this dessert a somewhat medicinal and clinical feel. While not unpleasant, and it certainly made sense as a breather in between the relative richness of the pre-dessert and the petit fours, it wasn’t entirely satisfying either. 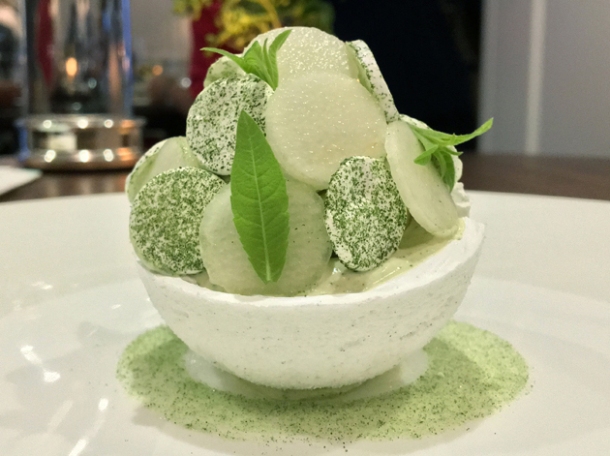 Petit fours consisted of two pairs of two. Although the filling of the chocolate tarts were only chocolatey in the sense that it was brown, the fluffiness of the piping hot filling and the expert construction of the thin yet crunchy pastry made the tarts a success. Tart and tangy passion fruit pastilles were my favourite of the petit fours, ethereally soft rather than squidgy. 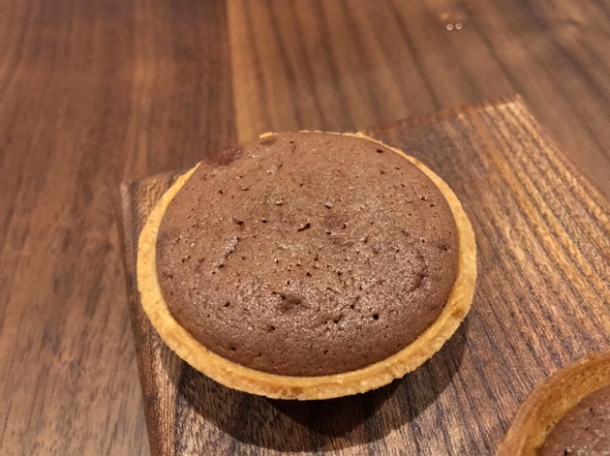 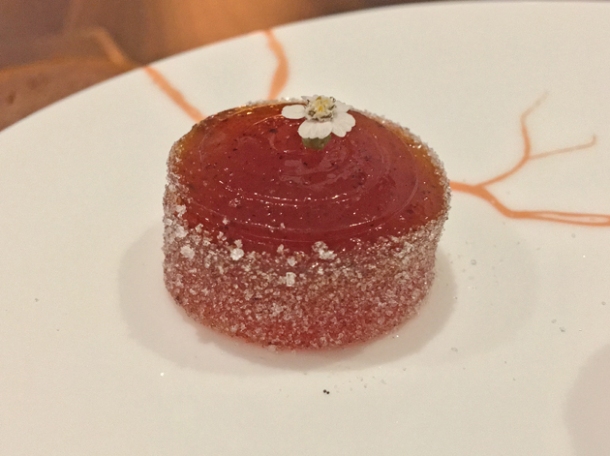 Someone tweezered a wee little flower onto these pastilles and I barely registered their presence.

There’s no doubting the technical excellence and craftsmanship in many of Core’s dishes. While Core’s summer menu isn’t vegetarian, the near absence of meat is still notable. This is not only the basis for much of the inventiveness on display, but also helps distinguish this restaurant from its many peers in this part of town and in London more widely.

And yet I found the tasting menu, as a whole, to be somewhat lacking. Everything seemed to have its place and rhythm, from scintillating amuse bouche to a gentle ramping up of seafood-and-butter/sauce pairings. From a ‘meaty’ mains to a sing-song cadence between reasonably strong flavours and palate cleansers. But from repetitive flavour pairings to unbalanced compositions and dishes that felt oddly clinical and dispassionate, it ultimately failed to be fully satisfying.

Core, nonetheless, has the obvious potential to be great. But, to borrow and paraphrase a grossly misapplied conclusion from another reviewer, Core as it currently stands is both important for its place in London’s restaurant firmament – for its clear ambition to elevate it even further – and a little disappointing in the way everything actually tastes.

Total cost for one, including service charge but excluding soft drinks: £109