And I mean that in the nicest possible way

Stuff any old combination of meat, veg and sauce into a tortilla and someone, somewhere will call it ‘Mexican’ even if the result only has a tangential relationship with Donald Trump’s favourite country. To be fair, former street food operators Killer Tomato make no such spurious claims of authenticity for their burrito and taco menu which clearly derives inspiration from elsewhere for much of their menu.

Killer Tomato’s geographic wanderings are obvious from its most eye-catching dish – the cheeseburger tacos. The large circumference of the tacos meant they were inevitably made out of wheat flour rather than maize, but at least they didn’t get in the way of enjoying the beef. Meaty chunks of finely ground mince were cooked well-done and reasonably moreish, especially with the dressing of rose-style burger sauce, crisp lettuce and slightly tart gherkins.

It’s surprising no one has thought of mashing up the two biggest casual food trends of recent years together before. Killer Tomato’s burger-taco hybrid won’t set either world alight, but it’s pleasing enough on its own terms. 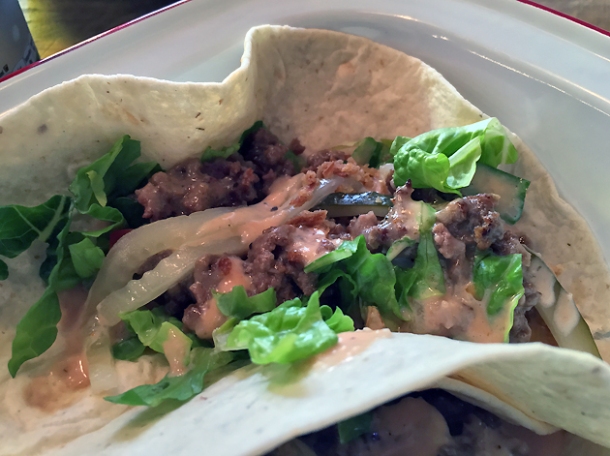 Fried chicken tacos thankfully didn’t mimic the Colonel’s finger-stainin’ greasiness. The chunks of fried chicken were reasonably crunchy, but lacked the fine visceral crispiness of the very best fried chicken. More disappointing was the sweet, sticky and tangy red sauce. Falling somewhere in between a Korean-style gochuang sauce and a vaguely Sichuanese gongbao-style sauce, it wasn’t potent or multi-layered enough to convincingly resemble either. Unlike the cheeseburger tacos, corn flour tortillas were used here. While reasonably nutty, they were a bit too thin and fragile. Not bad overall, but not great either. 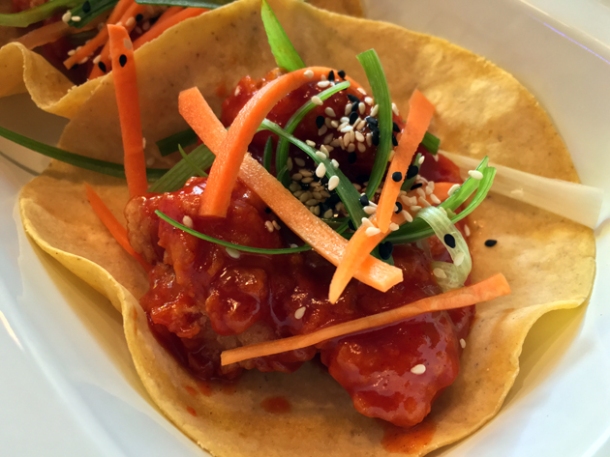 Not even the Uncanny Valley, more like the Resemblance Basin

Like the fried chicken, brisket croquettes were reasonably crisp and free of excess oil. The rich, unctuously meaty filling was pleasing – much more so than either of the meats in the tacos above. 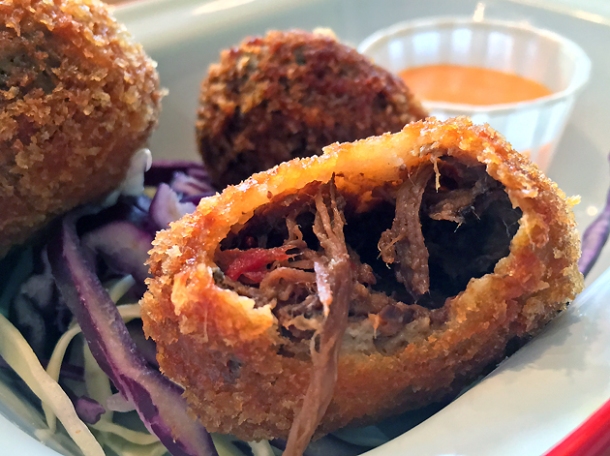 I feel like I’m missing out on someone’s in-joke when it comes to the green chorizo and ‘chips’ tacos. The same tortillas from the fried chicken tacos made a repeat appearance. They were filled with grainy and coarse, but bland and not especially fatty slices of green-coloured chorizo. The strange addition of floppy fries were not endearing. If there was ever a dish designed to win over easily-impressed drunks, then this would be it. 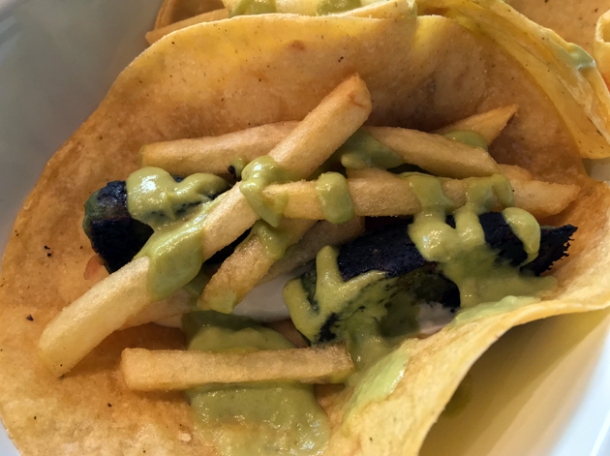 Apart from the use of maize flour tortillas in most of the tacos, Killer Tomato’s other notable tip of the hat to Mexico is the absence of rice in its burritos. The carbs are hardly needed as the large burritos are generously filled enough already. Tightly wrapped, not one morsel of the moreish beans or the pork was wasted. While the beans were pleasing, the pork was more of a mixed bag – reasonably moist, but largely anonymous. The most pleasing bit was the crackling, but its crispness and unctous fattiness was uneven with some segments verging on stodginess. 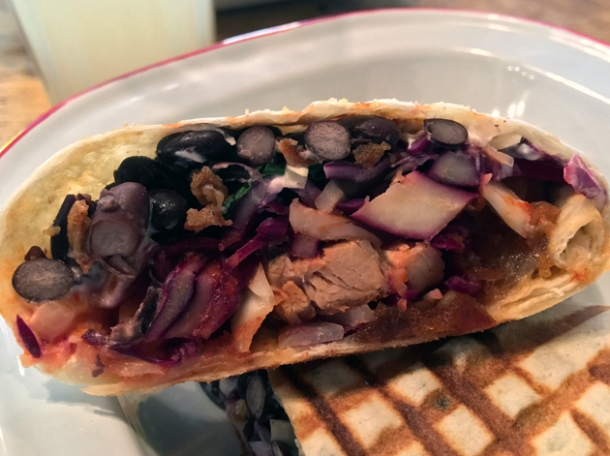 This review’s procrastination was brought to you, in part, by Harambe memes.

A lot of Killer Tomato’s burrito and taco fillings consist of meat, deep-fried or otherwise. Vegetarians and pescatarians haven’t been ignored though. Although the accompaniments/toppings in the battered fish tacos were utterly forgettable, the fish chunks themselves were well-executed. Crisp and oil-free on the outside, meaty yet gently flaky on the inside. The maize tortillas showed signs of improvement too – although still a bit too thin and not fluffy enough, they were noticeably more nutty. 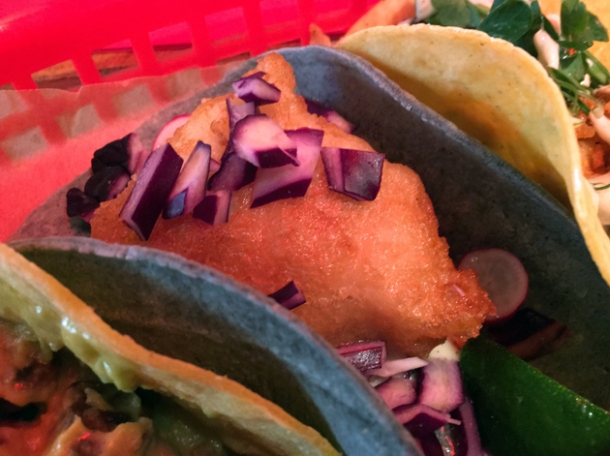 Crisp, sharp and buttery courgette slices were paired with a reasonably punchy aioli to make a pleasing set of vegetarian tacos. The other purely vegetarian option saw moderately taut mushrooms outshone by slippery, buttery leaves and a moderately moreish sauce of indeterminate origin. 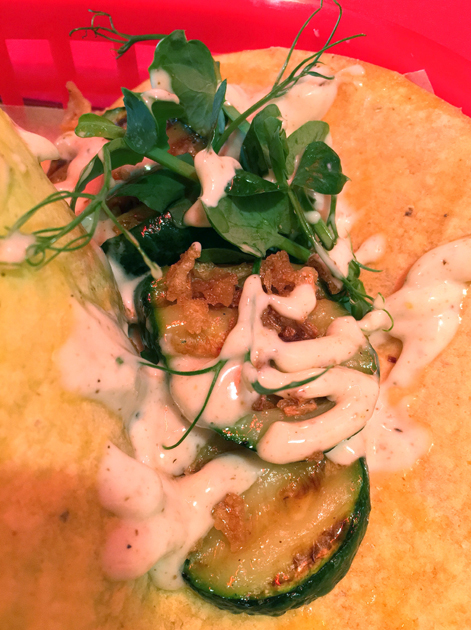 You don’t have to put on the red light. 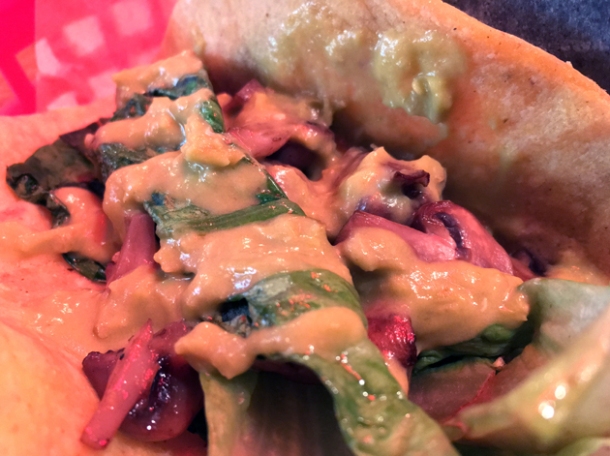 There’s not mushroom left inside these packed tortillas.

Most of Killer Tomato’s dishes are relatively heavy, but one light and breezy option well-suited for a hot summer’s day was the crayfish tostadas. A crunchy fried maize tortilla was topped with reasonably firm and bouncy crayfish, mildly zingy ‘hot’ sauce and a cool sour cream. 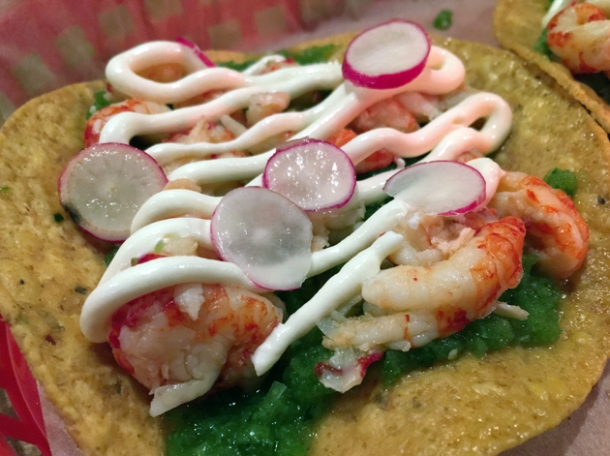 The fried chicken burrito was, unsurprisingly, an embiggened version of the fried chicken tacos. The fried chicken chunks were largely the same as they were in the tacos, but with the addition of reasonably moreish beans and crisp veg. The sauce was different though – a hot sauce (the Smokin’ Hot option) that actually packed a tingly heat. 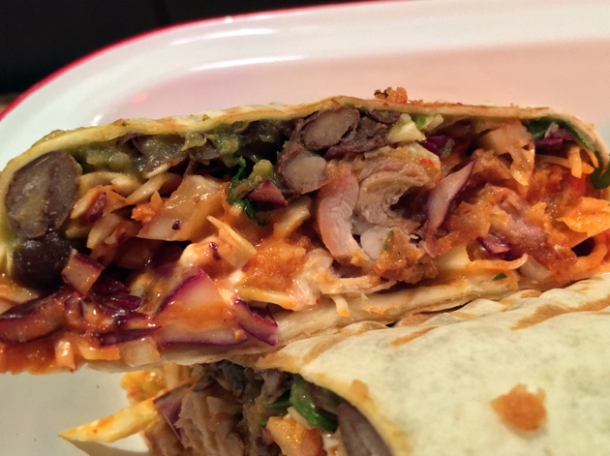 Fear will find you.

An actual hot dog bun was used in the ice cream sandwich, although it’s not that odd considering how much sugar goes into most supermarket and food service buns. Although the coconut ice cream filling was refreshingly cold, but not uncomfortably so, both the chocolate sauce and syrup were too timid to make much of an impression. Plus, the abundance of both made cutlery a necessity. This dessert was definitely not finger food, despite what the hot dog bun’s presence may lead you to think. 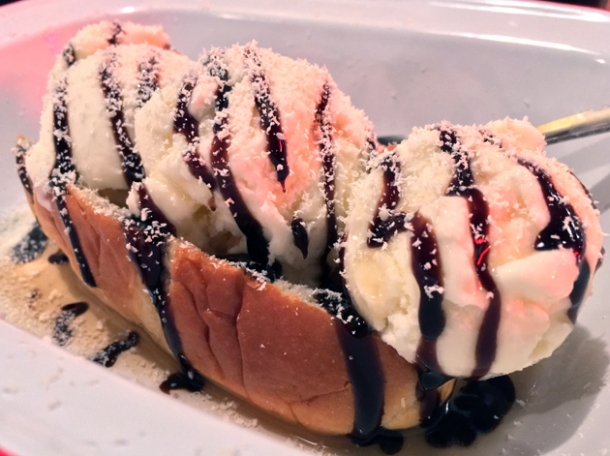 There’s nothing wrong with decidedly non-Mexican burrito and taco fillings – Breddo’s takes that approach and it’s one of my favourite purveyors of tortilla-wrapped meals. While there’s much to like at Killer Tomato, including its warm and gracious service, the kitchen’s execution is a little too uneven for me to recommend this place unreservedly. Shepherd’s Bush already has a merely satisfactory taco joint – it deserves a truly great one. It’s a shame that Killer Tomato isn’t it.