The City isn’t the first place that comes to mind for eating out inexpensively, with most people heading to nearby Shoreditch instead. There are worthwhile restaurants to be found though, you just have to know where to find them. The oddly-named My Old Place is on a side street just a few yards away from the eastern side of Liverpool Street station. It’s a brightly lit, sparsely decorated place. Service is brusque and clipped, but efficient. In short, it has all the charm of a doctor’s waiting room, but it’s the food that matters.

The large plates of food on My Old Place’s ridiculously long menu are best suited for sharing, so I dragged The Lensman, Templeton Peck and Happy Buddha along for the ride. Like Oriental Dragon, there’s an extensive selection of barbecued meat skewers. The bunny-loving Lensman was adverse to the idea of barbecued rabbit, so we opted for a couple of lamb kidney skewers instead. The offally little organs had a crisp exterior and a tender interior which went down a treat. The chunks of barbecued lamb flesh had a very similar texture, but were a little too fatty in places. They were still meaty enough though and were charred and smoky with a strong hint of cumin too.

The squeamish may balk at the idea of eating pig’s ears and whelks in chilli oil, but thankfully none of us were so lily-livered. The lightly salty whelks had a firm bite and tender flesh, while the pig’s ears had a rind-like texture and consistency to them. The chilli oil was only mildly piquant, but the whelks were still a winner.

The wood ear mushrooms didn’t taste of much, but did have an interestingly soft and wrinkly fungus-like texture. The flavour came instead from the punchy, lightly salty wasabi and soy-based dipping sauce.

Play it by ear.

It’s hard to avoid whelks on the menu and we had the little blighters again, this time paired with slices of pork tripe and mashed garlic. The latter actually came in whole cloves and didn’t really add much to the dish. In any case, the tender, wrinkly, offally tripe and lightly salty whelks were good enough to stand on their own.

Cuttlefish with fried, pickled peppers sounds like an unusual combination, but it was an ultimately tepid and uninspiring dish. The curled slices of cuttlefish were too soft and bland, while the peppers were rather mild and not at all tart or sour either.

It initially seemed that we’d been cheated when our plate of clams and spinach arrived with nothing but greenery visible. The pile of seafood was actually heaped underneath all the spinach in the middle of the plate and it’s a good thing they were tender and salty as the underwhelming spinach wasn’t up to much. 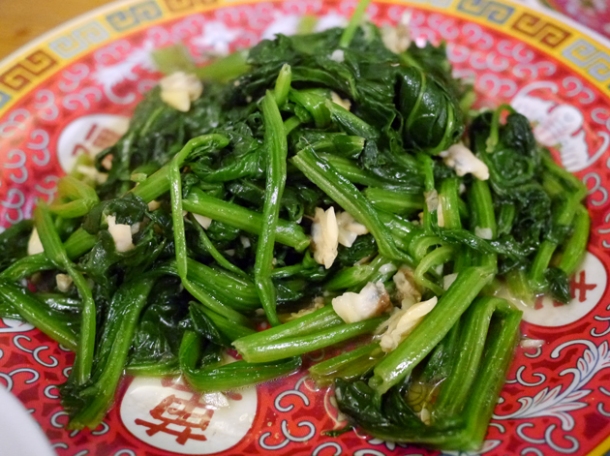 Clam dunk? Not quite.

A better choice of greens were the light and crisp stir-fried French beans served with some mild chillies.

Bean me up, Frenchie.

Our meal ended on a sour note with a couple of distinctly underwhelming dishes. Thin, flat rice noodles, the house lo mein, were smothered in a generic brown sauce and were livened up only by some small flecks of earthy mushrooms. Happy Buddha insisted on having some fried chicken which arrived in a thin, tasteless batter along with some onions and peppers in a thin, uninspiring sauce.

A kaboodle of noodles. 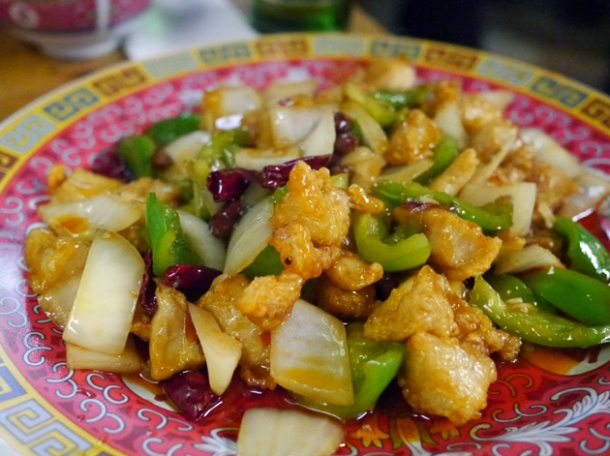 There are some good dishes available at My Old Place, but finding them can be tricky. The menu is unnecessarily huge, with many entries apparently just minor variations of one another, and there are more than a few duffers too. Stick with the more unusual sounding dishes and you should end up with a good meal. The low prices make all of this more tolerable, but in the end, like the similar Oriental Dragon in Fitzrovia, My Old Place is merely good enough, rather than the great restaurant it could be with a little more thought and attention to detail.

Total cost for one person including service and drinks when shared between four: £25 approx.